Goaltending was vital in helping the Utica Comets continue their red-hot streak. 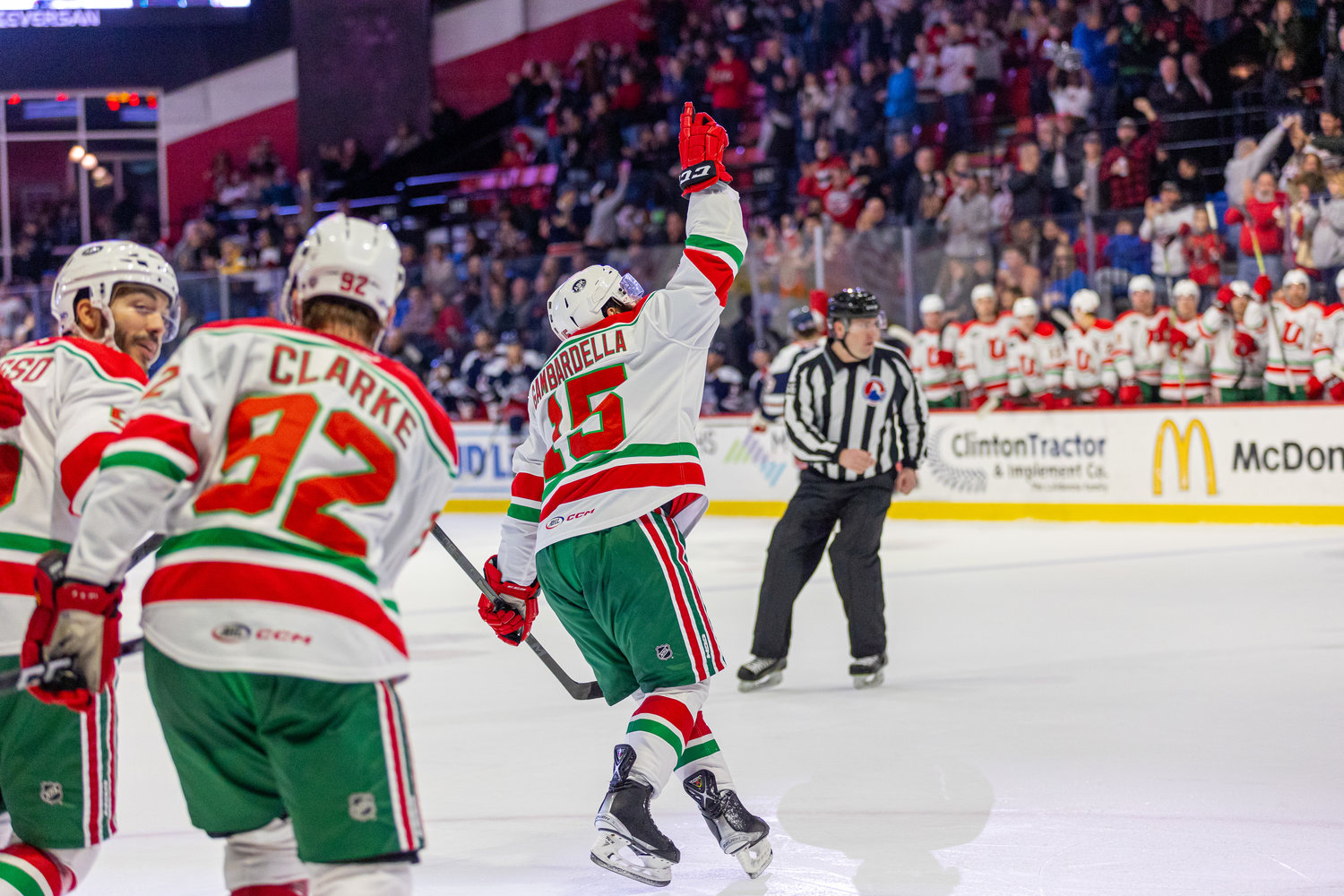 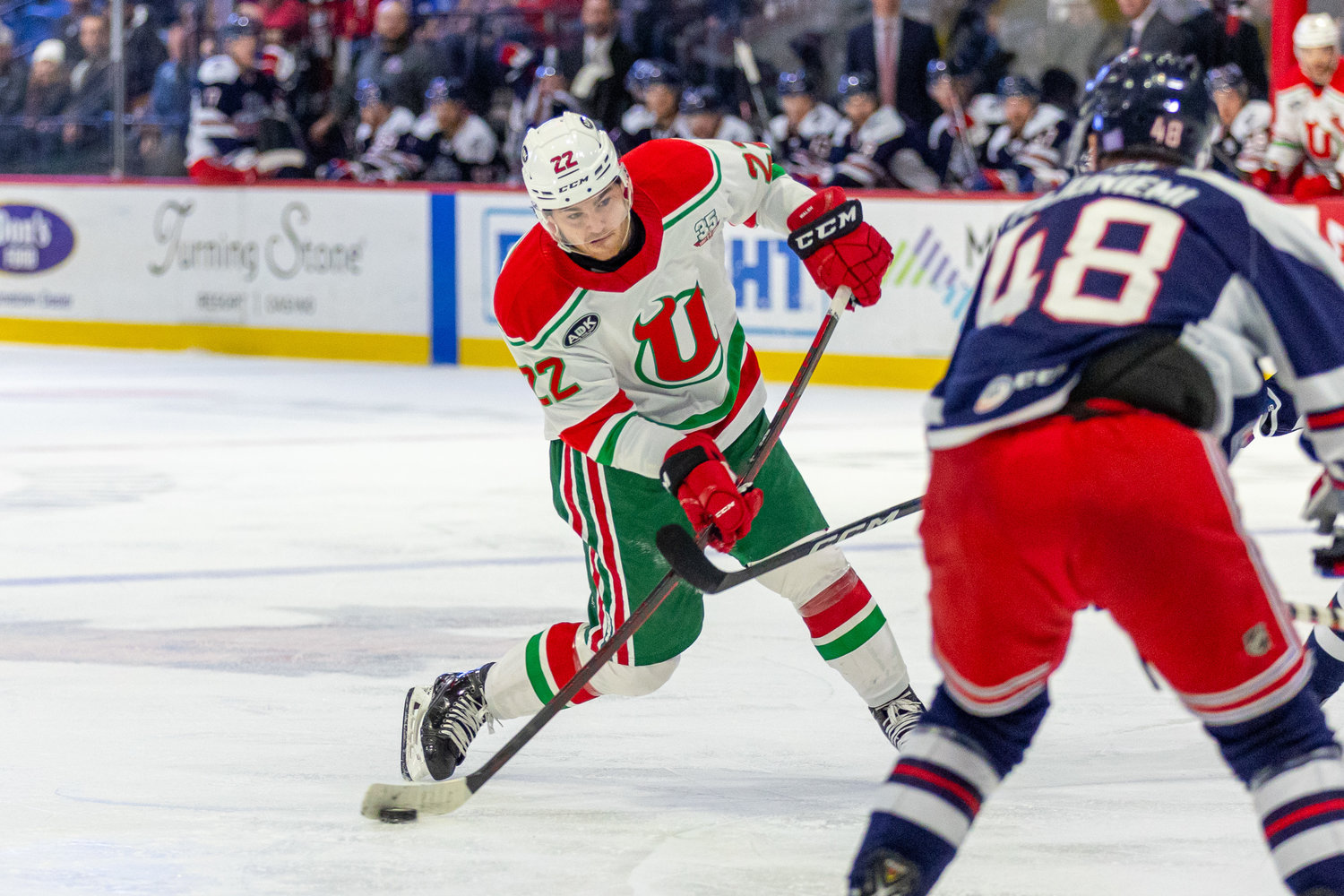 Utica Comets defenseman Reilly Walsh rips a shot on goal against the Hartford Wolf Pack on Friday at the Adirondack Bank Center. The Comets came back from a 2-0 deficit to win 3-2 in a shootout. It was the first of three one-goal wins for the Comets during the weekend.
(Photo courtesy of David Herman / Utica Comets)
Previous Next
Posted Monday, January 9, 2023 7:36 pm
Ben Birnell
Sports writer
email / twitter

Goaltending was vital in helping the Utica Comets continue their red-hot streak.

The Comets earned three one-goal wins over visiting Hartford on Friday and on the road Saturday at Springfield and Sunday afternoon at top Atlantic Division team, Providence.

Utica rallied from a two-goal deficit against Hartford for a 3-2 win. Then, the Comets edged Springfield and Providence each by 2-1 scores the next two days.

“We’re really pleased to get a win to start the new year in the home building,” Comets coach Kevin Dineen said following Friday’s win. Even down 2-0 against Hartford, he said, “we were comfortable” and “we straightened out our game,” especially regarding puck management.

With the wins over the three Atlantic Division teams, the Comets’ point-streak is at 11 games (9-0-2-0), which is the longest active streak in the 32-team American Hockey League.

It is the longest point-streak for Utica since an eight-game stretch in Jan. 2022. The team also had 13 consecutive wins to start last season. The Comets’ record for longest-point streak is 16 games in early 2018.

Second-year netminders Nico Daws and Akira Schmid — back with Utica after a brief stint with parent New Jersey — combined for 90 saves on 94 shots over the three wins.

Daws totaled 21 saves Friday and then made 31 stops against Providence on Sunday when he was arguably the team’s best player. He’s won five consecutive games and is 10-6-1 overall this season. His 2.67 goals-against average is tied for 22nd in the American Hockey League. He has a .905 save percentage.

Daws has 24 career wins with Utica, tying him for sixth with Michael DiPietro on the team’s victories list.

He nearly had his first shutout of the season Sunday, but Providence scored with about three minutes remaining in the third period. Included in the effort were several timely saves in the second period when Utica was forced to navigate a two-minute 5-on-3 penalty kill.

On Saturday, Schmid had a season-best 38 saves, including 17 of 18 in the second period against the Thunderbirds. He also stopped nine shots in the third period after Utica grabbed the 2-1 lead late in the middle frame on a goal credited to Nick Hutchison. That followed a controversial Springfield goal on a delayed penalty when Utica appeared to touch the puck moments before but went uncalled.

His 27 career wins with Utica are fifth-most on the team behind Joe Cannata (34).

As of Monday, Utica was in second place in the seven-team North Division - six points behind first-place Toronto - with 40 points. Utica is two points ahead of rival Rochester, which has completed one fewer game.

Utica is seven points ahead of Belleville and nine ahead of Syracuse. Utica and Syracuse are scheduled to play three consecutive games and four in six later this month.

Six players were credited with the Comets’ goals scored in regulation over the three wins.

Linemates Joe Gambardella - who celebrated his goal Friday by pointing upward to honor his late grandmother - and Graeme Clarke were responsible for the goals that helped Utica rally against Hartford.

Clarke has been especially hot with 23 points in his last 20 games.

Dineen noted that the line of Gambardella, Clarke and center Nolan Stevens “was a big difference maker” Friday.

Said Dineen on Clarke: “I’m leaving him alone. He’s hot. He’s playing the right way.” He added, “He’s rolling. Guys like that, you find ways to get him the puck.”

Stevens added his career-best 10th goal of the season Saturday.

The next day, Tyler Wotherspoon and Andreas Johnsson scored to give Utica 2-0 lead.

After sitting near the bottom of the AHL in scoring earlier this season, Utica is averaging 3.29 goals. That’s 13th-best in the AHL.

The Comets went seven-for-seven on the penalty in the games at Springfield and Providence, including 5-for-5 on Sunday.  Utica finished the weekend 8-for-9 on the kill.

Kevin Dineen has 382 AHL wins, which is two from tying Randy Cunneyworth for eighth on the league’s career wins list.

With the move, Utica has 15 forwards on the roster.

Pinho and Samuel Laberge have recently missed time with injuries, though Pinho recently practiced with Utica.