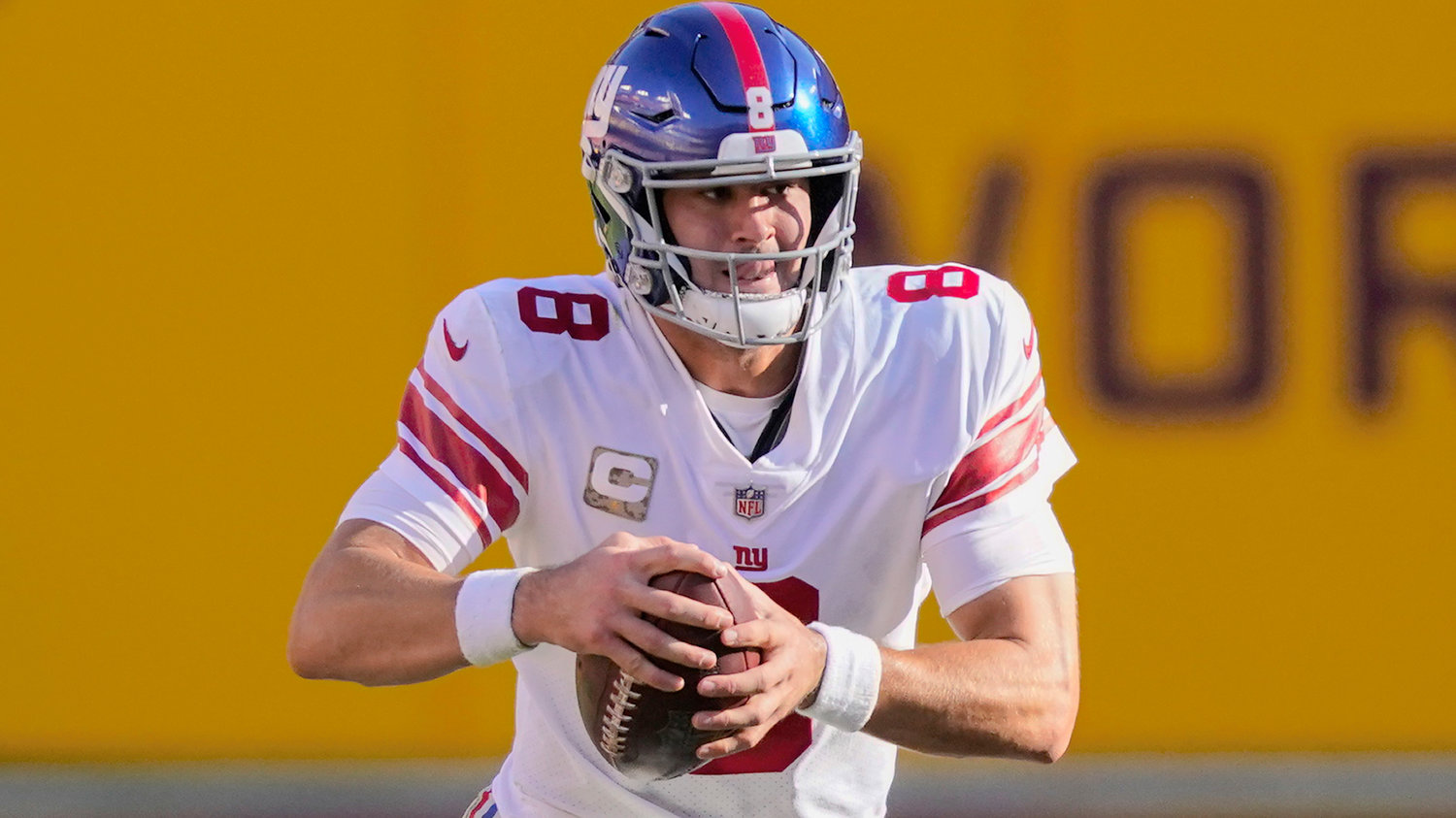 EYES DOWNFIELD — New York Giants quarterback Daniel Jones scrambles with the ball in the first half of an NFL game against the Washington Football Team, Nov. 8, 2020, in Landover, Md. Jones is looking to stay undefeated in his career against Washington when he leads the New York Giants into the NFC East matchup on Thursday night. The sixth pick in 2019 is 4-0 against Washington and 4-19 against the rest of the NFL.
(AP File Photo)
Posted Thursday, September 16, 2021 12:00 pm

LANDOVER, Md. (AP) — Even if Daniel Jones knows why he has been so successful in his career against Washington, the New York Giants quarterback wants no part of sharing that insight.

Each game is different, Jones insists, yet he’s 4-0 against Washington and 4-19 against the rest of the NFL through his first two-plus pro seasons.

“He runs well with the ball — he’s a dynamic runner,” Washington coach Ron Rivera said. “So, that’s been it: He’s got a good arm, strong-arm quarterback who throws the ball.”

Sometimes for a costly interception. Or he might be putting the ball on the ground for a fumble, something Jones did as much or more than any other player in the league the past two years. Now Jones is looking to keep his undefeated run going against Washington, which is turning to unproven but popular Taylor Heinicke to start after Ryan Fitzpatrick injured his right hip in Week 1.

The matchup between Washington’s fearsome — or what should be fearsome — pass rush against New York’s offensive line will go a long way toward determining who wins the NFC East matchup on Thursday night. Yet all eyes are on the quarterbacks with mistake-prone potential in Jones going up against a journeyman in Heinicke who almost outdueled Tom Brady in the playoffs last season.

“I just remember him being a gunslinger,” said Giants cornerback James Bradberry, who played for the Panthers in Heinicke’s only other regular-season NFL start back in 2018 with Carolina. “(He is) willing to take chances, trusting his receivers and giving them opportunities to make plays.”

The trust is there between Jones and second-year coach Joe Judge, who inherited the 2019 No. 6 overall draft pick when he got the job. Jones fumbled for the 30th time in New York’s Week 1 loss to Denver, but also threw for 267 yards and a touchdown.

“Daniel prepares extremely well,” Judge said. “Daniel goes out there and practices hard every day. He goes out there and we have confidence in him because of the way he prepares on a weekly basis, doing everything it takes to be ready for the game.”

Washington has that kind of confidence in Heinicke, despite most teammates not knowing who he was a year ago. Heinicke was signed as the “quarantine quarterback” after the Broncos fiasco that forced them to start a receiver because of virus protocols. But the way the former Old Dominion star played and ran with reckless abandon late last season and in the playoffs made him into a fan favorite and a player other guys rally around.

“I’m excited to be out there, it’s been a dream of mine and I want to go out there and play some good football and win games,” Heinicke said. “Maybe that’s it. I just try and go out there and give the guys some energy and hopefully go get a win.”

While every player is facing the same short turnaround, it’s a bigger deal for Giants running back Saquon Barkley having a second game in four days coming off a major knee injury. Barkley, who tore the ACL in his right knee last season, rushed for 26 yards on 10 carries against the Broncos.

“I haven’t gotten tackled in a whole year or played in a football game in a whole year,” Barkley said. “There’s always going to be some soreness. Definitely a quick turnaround this week, but that’s why I’ve got to be a pro and get my body ready.”

Washington’s defense allowed a league-high 73.7% conversion rate on third downs in Week 1, a 20-16 loss to Justin Herbert and the Los Angeles Chargers. The unit led by reigning AP Defensive Rookie of the Year Chase Young was supposed to be the team’s strength, and after every Chargers drive reached the red zone there’s plenty of room for improvement.

“All of us took it personally because that’s not what we want to put on tape,” linebacker Jon Bostic said. “That’s not our standard.”

The Giants dressed seven offensive linemen for their season opener and used all of them.

The biggest surprise was starting left guard Shane Lemieux playing 17 snaps. A knee injury early in training camp kept him off the field for all three preseason games.

Guard Ben Bredeson, acquired from Baltimore before the final cuts, got 44 snaps. Nate Solder, who opted out of last season because of COVID-19 concerns, split time at right tackle. He got the start and was on for 43 of 61 plays. Second-year pro Matt Peart had 19 snaps.

“I can’t say too much, but we’re drawing some stuff up, me and ’Tez,” Young said. “We’ve been watching film together, so we’re going to go out there and give it a real good shot.”