Garrett focused on Dallas, not on future with Giants

(AP) — With a potential playoff berth on the line and, of course, the game being against the Dallas Cowboys, New York Giants offensive coordinator Jason Garrett had no intention of talking about …

Garrett focused on Dallas, not on future with Giants 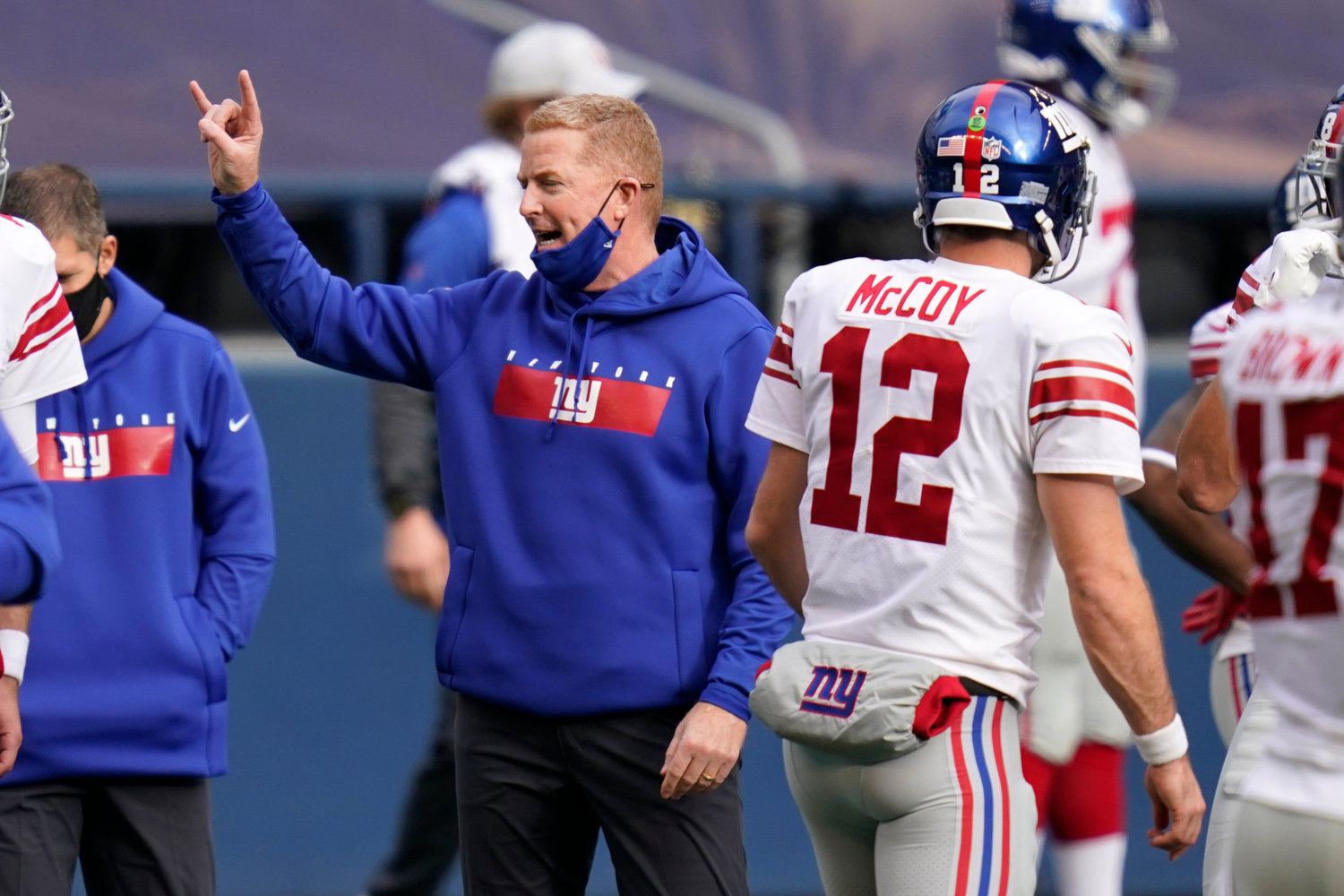 HOoK ‘EM HORNS — Giants offensive coordinator Jason Garrett gestures as he stands next to quarterback Colt McCoy before an NFL game against the Seahawks on Dec. 6 in Seattle. Garrett’s gesture is the hand sign for the University of Texas, where McCoy was the starting quarterback from 2006 to 2009.
(AP File Photo)
Posted Friday, January 1, 2021 7:54 pm

(AP) — With a potential playoff berth on the line and, of course, the game being against the Dallas Cowboys, New York Giants offensive coordinator Jason Garrett had no intention of talking about the future.

Garrett, who coached the Cowboys for a decade, sidestepped questions on Thursday about whether he was either getting any feelers about a head coaching job or what his status is with the Giants after one season in which the offense has struggled.

It’s been a strange year. New York lost star running back Saquon Barkley with a major knee injury after two games and had to play with an offensive line that now starts two rookies on the left side and a guy playing center for the first time in his NFL career.

Still, the NFC East is up for grabs. Washington (6-9) can win the division by beating Philadelphia on Sunday night. If it loses, the winner of the Cowboys-Giants game wins the division.

The coincidence of Dallas and New York playing in a big game and Garrett facing his old team is not lost on the 54-year-old, who recently was sidelined by a positive COVID-19 test.

“Certainly, it’s interesting,” Garrett said before practice. “The circumstances are what they are, but we’re just excited to have this opportunity to be playing for potentially the division on Sunday. It’s been a funny year in the NFL, in the NFC East, all of that. You just keep trying to bang away and take advantage of your opportunities, and we certainly have a good one on Sunday.”

Garrett certainly has had an interesting few weeks. He tested positive after a loss to the Cardinals on Dec. 13 and missed the home game against Cleveland the following weekend. Former Browns coach Freddie Kitchens called the plays that week.

Garrett, who was isolated in a hotel room for 10 days, didn’t experience many symptoms, other than noting he felt sluggish. He did prepare the offensive game plan and went over it remotely with the team. He was not allowed to attend the practices.

“This has been an unconventional year for everybody, in and out of football,” said Garrett, who was back with the team last week in Baltimore. “Certainly during the football season, we’ve had to do things differently this year than we have in past years.”

Looking back on the season, Garrett said the offense has improved in several areas. The team is taking better care of the ball and penalties are down.

When asked about his future, Garrett would not bite. He has been that way all season, especially when he was asked about his time in Dallas and how his coaching tenure ended after last season.

“Really, I’ve just tried to stay in the moment in any position I’ve had as a player or coach in the NFL, Garrett said. ”That’s typically when you play your best and coach your best. That’s really what I’m focused on.”

Pro Bowl tight end Evan Engram said the players are confident in the system. The execution has been off at times.