Gambardella returns to Comets’ lineup for bounce back game

The Utica Comets have had to wait a week to play another game after Saturday’s 8-3 loss in Syracuse.

Gambardella returns to Comets’ lineup for bounce back game 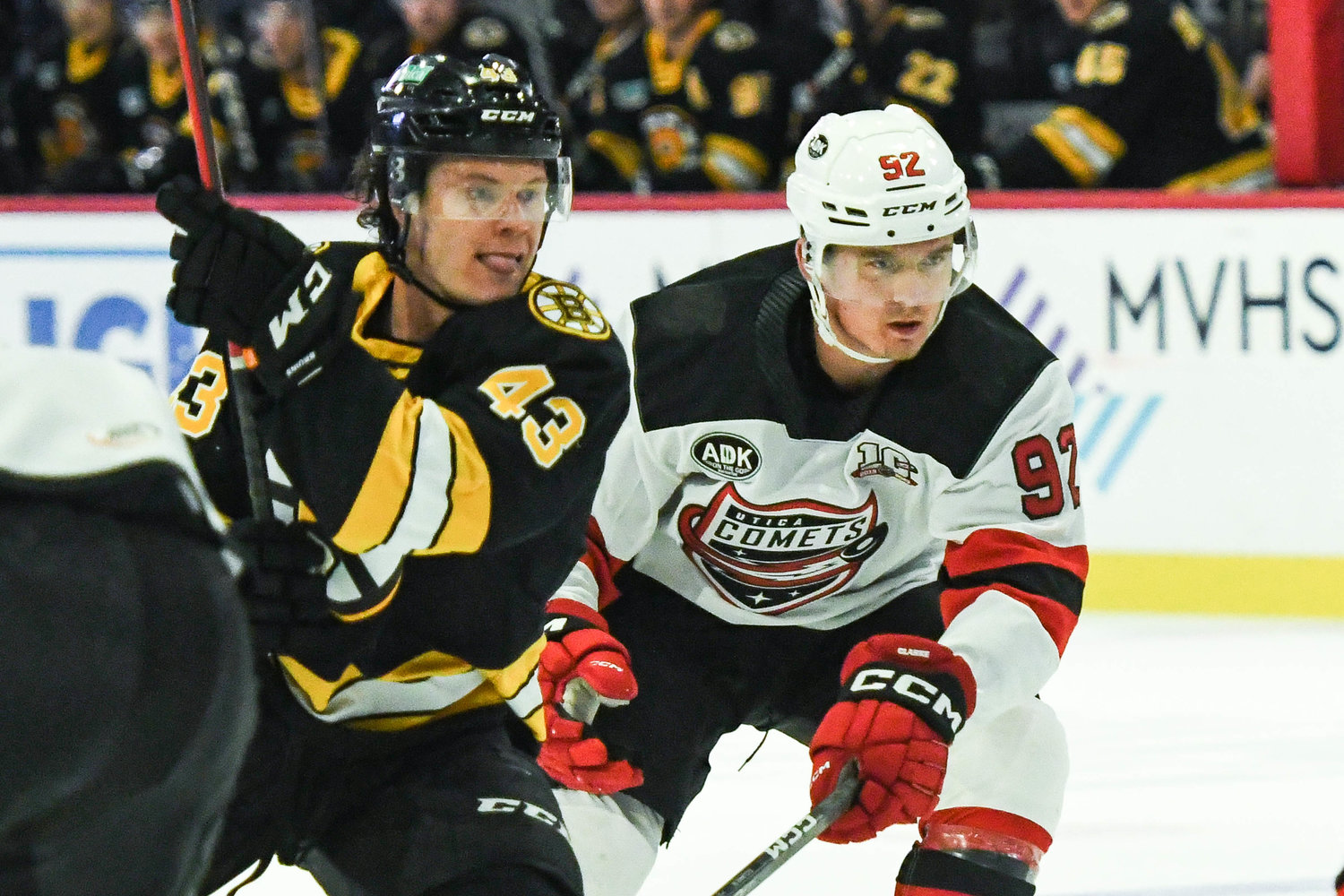 UTICA — The Utica Comets have had to wait a week to play another game after Saturday’s 8-3 loss in Syracuse. And while Mason Geertsen is suspended for six games for his actions in that game, the team is getting one of its leaders back from injury.

“We had to get back to the fundamentals,” said Comets head coach Kevin Dineen after practice Thursday. “Tough week to have when you get your tail whipped there on Saturday night and you have wait to the following Friday. Sometimes when you got a game within a day or two you can put it in the rearview. So we sat on that game for a while but it gave us a chance to work on some areas that we felt strongly about. We felt like it was a good, healthy week.”

Of that loss, Dineen said, “You get outplayed right from the drop of the puck.” He added, “You acknowledge what happened. We got good character people in (the locker room) that understand as well.” The coaches and players talked as a team and are ready to move forward, he said.

In the game against the Crunch on Saturday, Syracuse’s P.C. Labrie checked Comets defenseman Reilly Walsh along the boards. Geertsen immediately left the bench to get on the ice and got into a fight with Labrie. He was called for a game misconduct for leaving bench with 2:28 remaining in the second period.

“He broke a rule and (it’s) clear cut in the rulebook,” Dineen said Thursday. “He’s got six games where he’s going to be doing a lot of work on and off the ice to stay ready and be prepared when he comes back.”

So Utica will be missing “a heavy forechecker,” Dineen noted, but there’s an obvious replacement in the lineup. One of the team’s alternate captains, forward Joe Gambardella, is back after having not played since Oct. 17.

The team’s leading scorer, Brian Pinho, who has seven goals and 10 points, missed Saturday’s game and was in a yellow “no contact” jersey at practice Thursday. He is questionable with an injury but Dineen said the team will know today what his availability is for the two games against Rochester.

Dineen also talked about Simon Nemec, the second overall draft pick in 2022, who is one of two Comets defensemen with a goal each (along with Walsh) and is also tied with Walsh for most assists among Utica defensemen (four). He also has a plus/minus rating of plus-three, best among Comets’ blueliners.

“Nemo’s off to a good start,” said Dineen, using the young Slovakian’s nickname on the team. “There’s some areas of his game he’s continuing to work on.” He called his skating as well as his decision making with the puck under pressure “solid.” Nemec’s path to the NHL, he said, “will start with his solid defensive play.”

“If you’re here early at practice on a daily basis, you see that Graeme is a kid that just has a real passion for the game. He works at his craft. He prepares whether he’s on the ice or in the gym. It’s up to us and for Graeme to round out his game,” Dineen said of the third-year forward.

A third round pick by the Devils in 2019, Clarke, a right-shooting right wing, has a goal and four assists in 11 games so far this season. Last year in Utica, he had 10 goals and 14 assists in 52 games. In 31 games the previous season when the Devils’ AHL farm team was the Binghamton Devils, he scored eight times and had 10 assists.

Dineen said Clarke has built trust with the coaching staff that he can be counted on in such roles as the penalty kill and in protecting the lead at the end of a game.

“We’re excited about his future as a prospect,” Dineen said.

Clarke spoke after practice Thursday about the team and his own development.

“As a team and an individual I think we can be better. Personally, obviously, I want to contribute more offensively. I think I have more of that to my game. It’s still early in the season, but again you never want to get off to a slow start offensively.” He added, “I think I’ve had some good games but I want to get on the score sheet more.”

He said he “had a good camp” in New Jersey in the preseason, where he worked to improve his defensive skills so he could be relied on in key situations. “I made my mark there. And then I just wanted to come down here with some momentum starting the year.”

Clarke has played with a number of other forwards in the early part of the season as the team makes adjustments to find chemistry and scoring. “We’ve shuffled lines a bit. There’s been some injuries,” he said, as well as the routine shuffling of players up and down between Utica and New Jersey. “We have a team of great forwards and to play with anyone is good.”

“It’s obviously a fast and physical league. Everyone down here is hungry because everyone here wants to make the NHL.” And, he added, “Every game is kind of a fight.” His goal, he said, is to “be consistent every night.”