Utica Comets forward and alternate captain Joe Gambardella is a key leader for the team. 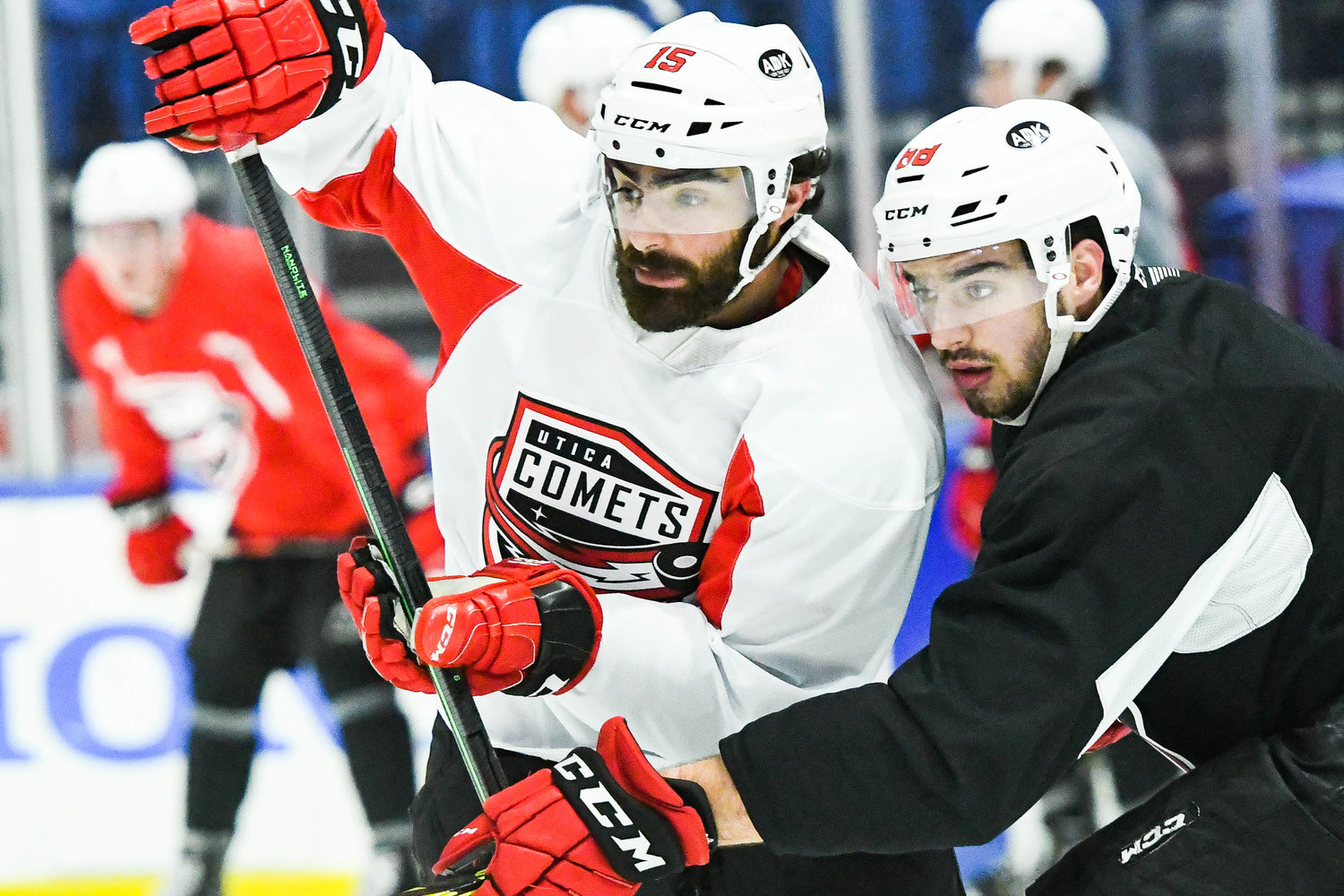 UTICA – There are ups and downs throughout any season.

Utica Comets forward and alternate captain Joe Gambardella has had his own this season. He missed a stretch of the team’s early games between late October and mid-November due to an upper-body injury. After he returned, he was a key part of the team’s hot stretch that led to the Comets matching an AHL mark with a 12-game point streak.

“Obviously, starting off with the (injury) I had wasn’t a good deal for me,” said Gambardella, who is in the second year of a two-year contract with the parent New Jersey Devils. “You never plan on that. Hockey players are always facing adversity and it is how you bounce back from it. It is nice to be around the rink and around the guys. They’ve been supportive.”

In early January, the 29-year-old Staten Island native’s grandmother died. In an Instagram post, he wrote “I’ll be forever thankful for my time spent with her.”

After spending time with his family, he returned to the Comets and scored a goal Jan. 6 against Hartford to help Utica rally in an eventual shootout win. Following his goal in the second period, he pointed up to honor of his grandmother.

It was a special moment for the personable and easygoing Gambardella, who is considered a “calming voice” for Utica. He's part of Utica's leadership group along with captain Ryan Schmelzer and defensemen Robbie Russo and Tyler Wotherspoon.

“(Joe) is a positive person to begin with,” said Comets coach Kevin Dineen, who described Gambardella as a sincere and hard-working person. “He cares about his team, his teammates and he’s a quality person to have around.”

Nolan Stevens, who played in Utica during the shortened 2021 season but is in his first season in the New Jersey organization, said Gambardella has been helpful. Other players have said similar about Gambardella.

“You need anything, Joe is going to be there. As a new guy, he’s been awesome for me. He makes you feel comfortable. He makes the guy around him feel better about their games and pushing them to be better,” Stevens said. “He’s huge for us in the room. I’m grateful to have him.”

Gambardella said he is flattered by the sentiments.

“I take a lot of pride in that,” said Gambardella, who appeared in his 275th AHL regular-season game Monday. “But, none of that comes without the management and staff putting those guys in the locker room. When you have players that we have in the locker room, it makes it very easy to come in, be a leader, help by example, stick around practice and teach guys some new things and being what a good pro is all about.”

While Gambardella said likes playing with the duo, he thinks the Comets have four strong lines.

“I think we just do a really good job reading off each other. Everyone does their part on the line,” said Gambardella, who noted Stevens and Clarke remind him of is former line mates at UMass-Lowell in C.J. Smith and John Edwardh. “We know that we have to have hard work to be successful. It is just doing the little things right and get pucks to the net. … I think we just work well together. Hopefully, that can continue."

SEASON SERIES: It will be the 5th of 14 meetings this season. Syracuse has won all three home meetings.

Utica Comets and Syracuse get re-acquainted