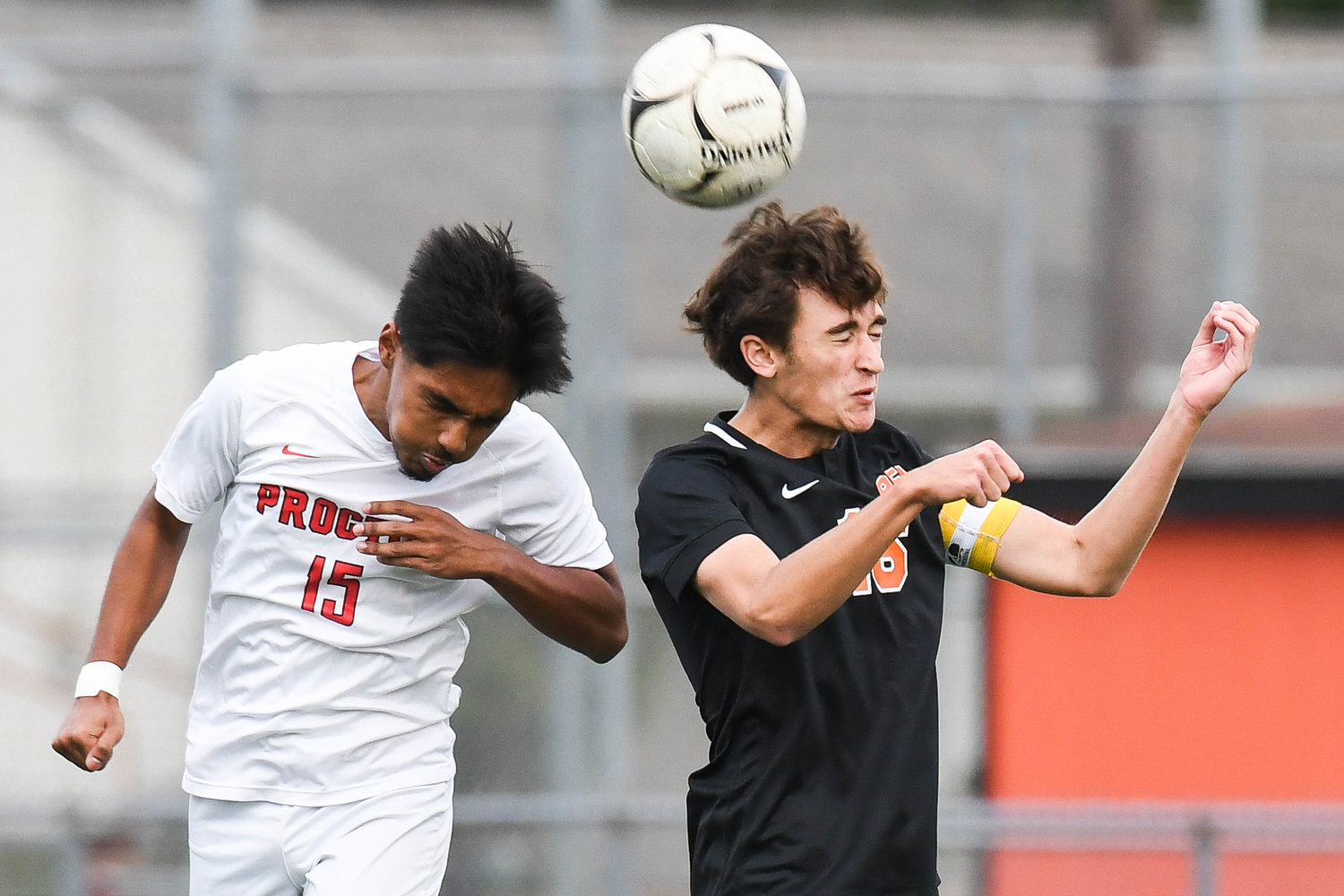 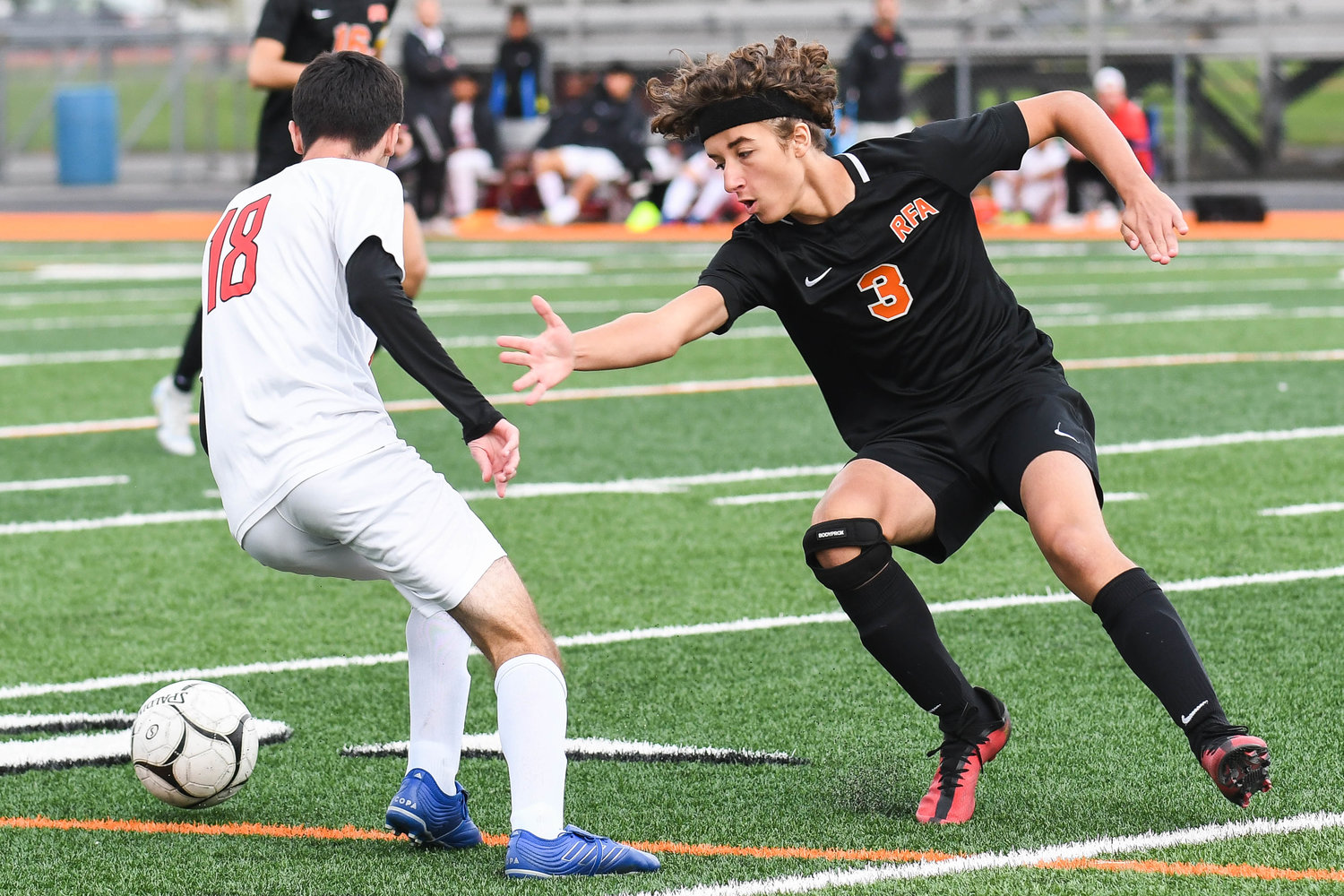 Rome Free Academy’s Noah Artigiani, right, defends Proctor’s Alan Catic during the game on Tuesday at RFA Stadium. Proctor scored once in the first half and three times in the second to get a 4-0 win. Four players had a goal for Proctor.
(Sentinel photo by Alex Cooper) 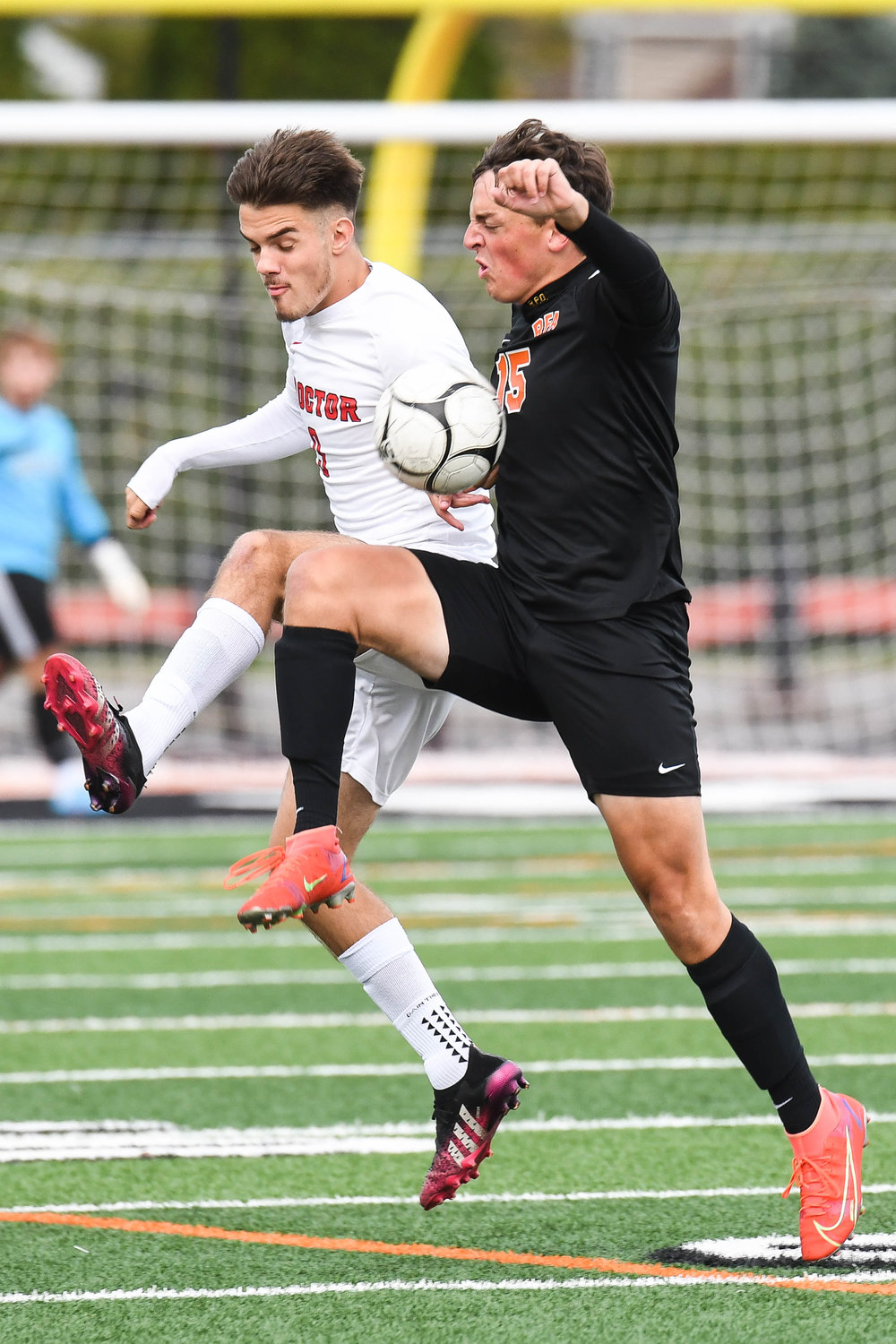 Rome Free Academy's Logan Wittmann, right, and Proctor's Amir Halilovic fight for control of the ball during the Tri-Valley League game on Tuesday at RFA Stadium. The Raiders got a 4-0 road win.
(Sentinel photo by Alex Cooper) 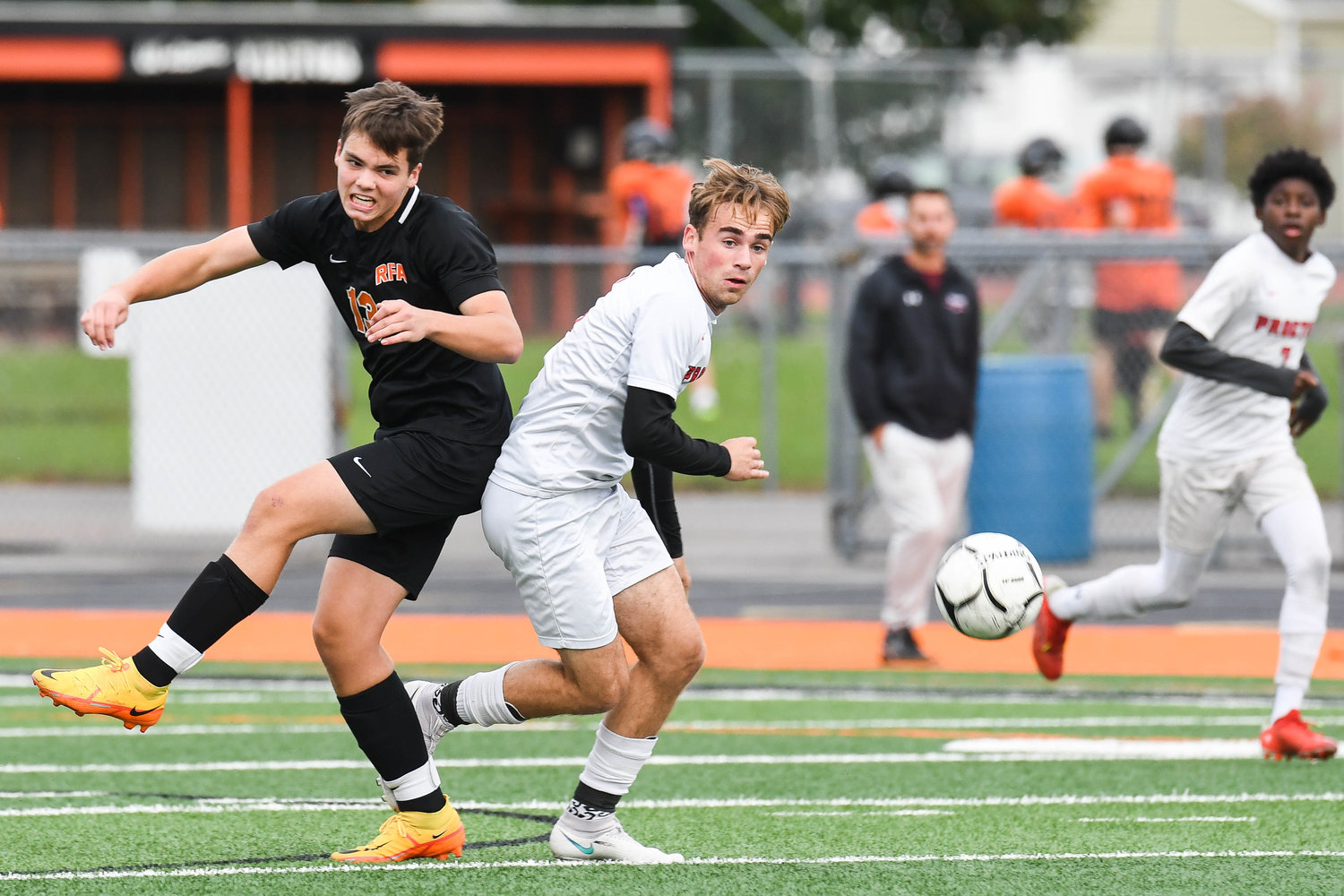 The Proctor boys soccer team's 4-0 road win against Rome Free Academy Tuesday in the Tri-Valley League set the program's record for shutouts in a season. Asim Gacic's 10-save effort was the team's 10th shutout of the season.

Siidahmed Somow scored and added an assist for the Raiders. Also scoring a goal each were Hussein Abukar, Ervin Ruznic and Ale Seho.

Matt McCormick had 12 saves and Max Hilderbran made six stops in split time in goal for RFA.

Samantha Ferguson completed a hat trick with a overtime game-winner for Westmoreland girls soccer at Herkimer Monday in the Center State Conference.

Emily Gubbins made five saves in the win.

Westmoreland improved to 9-3. The Bulldogs play at 5 p.m. today at Frankfort Schuyler in the league.

Lydia DeTraglia scored three times in a 5-0 win for Clinton girls soccer over visiting Adirondack Monday in the Center State.

Deanna Heintz made a dozen saves in goal for Clinton.

Morgan Hutchins had 13 saves for Adirondack in goal.

Clinton play at Cooperstown at 4:30 p.m. today in non-league play.

Adirondack hosts Utica Academy of Science at 4:30 p.m. Friday in the league.

The Camden field hockey team won 5-0 at home over Central Valley Academy in the TVL Monday.

Leading the way offensively for Camden was Avery Prievo who scored and had two assists. Cameron Schenk, Lillie Howe, Emma Watson and Ryleigh Johnson each had goals. Paige Jones chipped in an assist.0

Abby Henderson made one save in goal for the win.

Camden hosts Holland Patent in the league at 6 p.m. today.

HP holds on for narrow win

Izzy Stalker’s first quarter goal was enough for Holland Patent field hockey to get a 1-0 win at home over Baldwinsville in non-league play Monday.

Terra McLaughlin assisted on the game-winner with her pass from the right corner. Stalker tipped it in from the left side of the cage.

Maggie Koenig made three saves for the shutout.

Caley Gee made 10 saves for Baldwinsville.

Sarah Porter had a hat trick. Sophia Lobo, Carine Smith and Ella Herber scored once each.

Kaleigh Hamilton made two saves for the win in goal.

Isabella Irizarry made 16 saves for Whitesboro.

Whitesboro plays at Rome Free Academy at 6:30 p.m. today in the TVL.