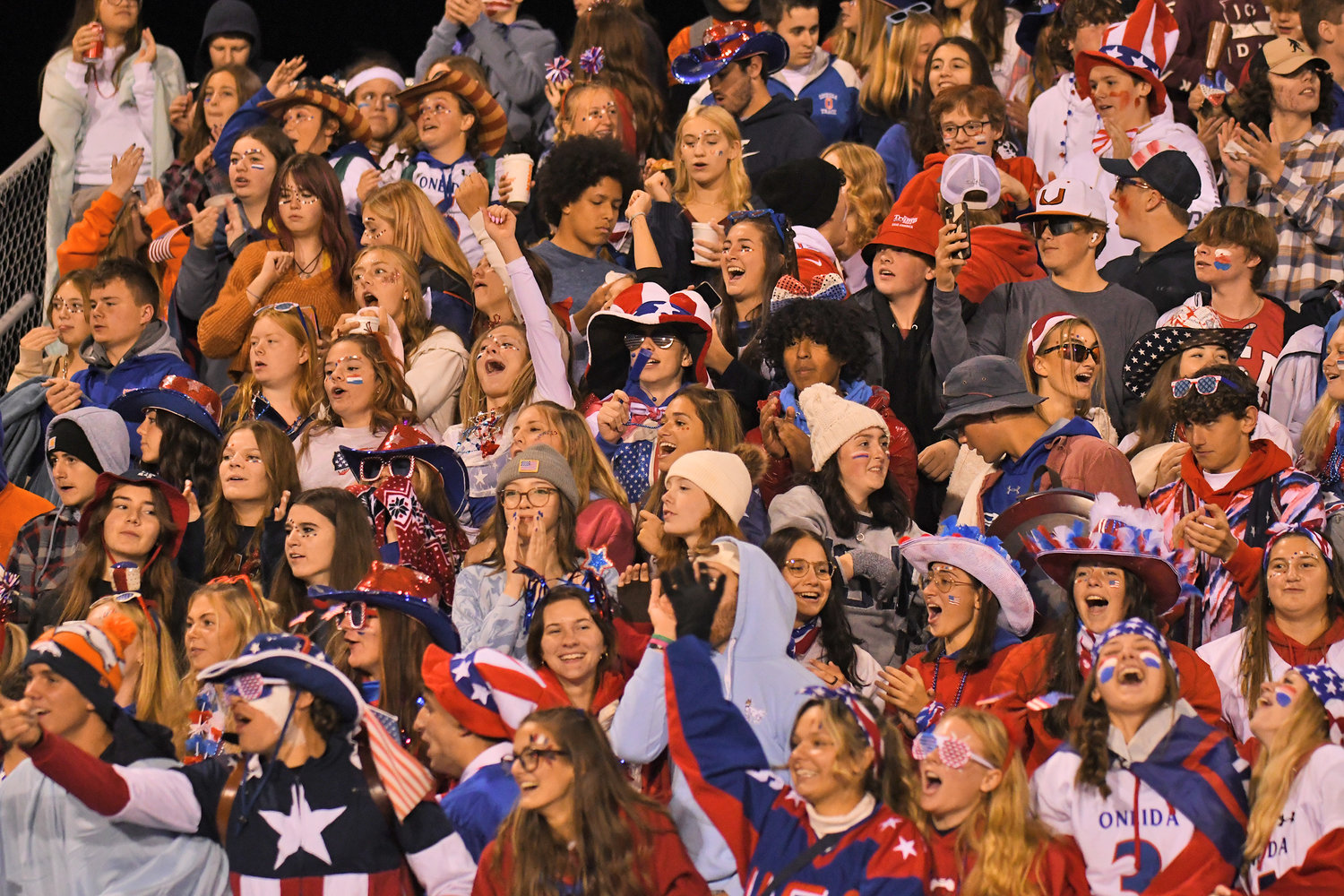 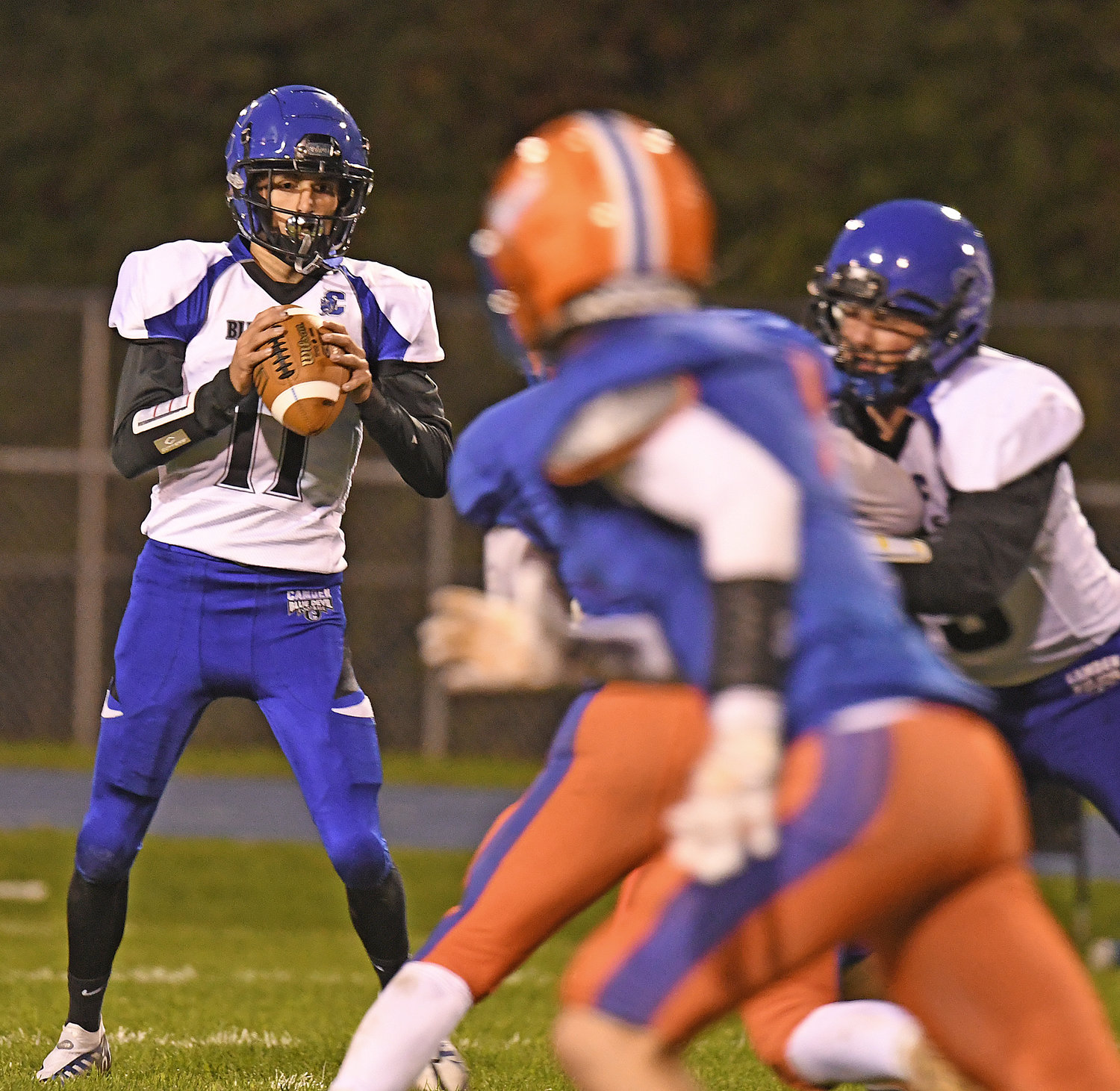 Camden QB Connor Dean looks for a receiver in the first quarter Friday night in Oneida. Dean finished with four total touchdowns in a 39-20 win.
(Sentinel photo by John Clifford) 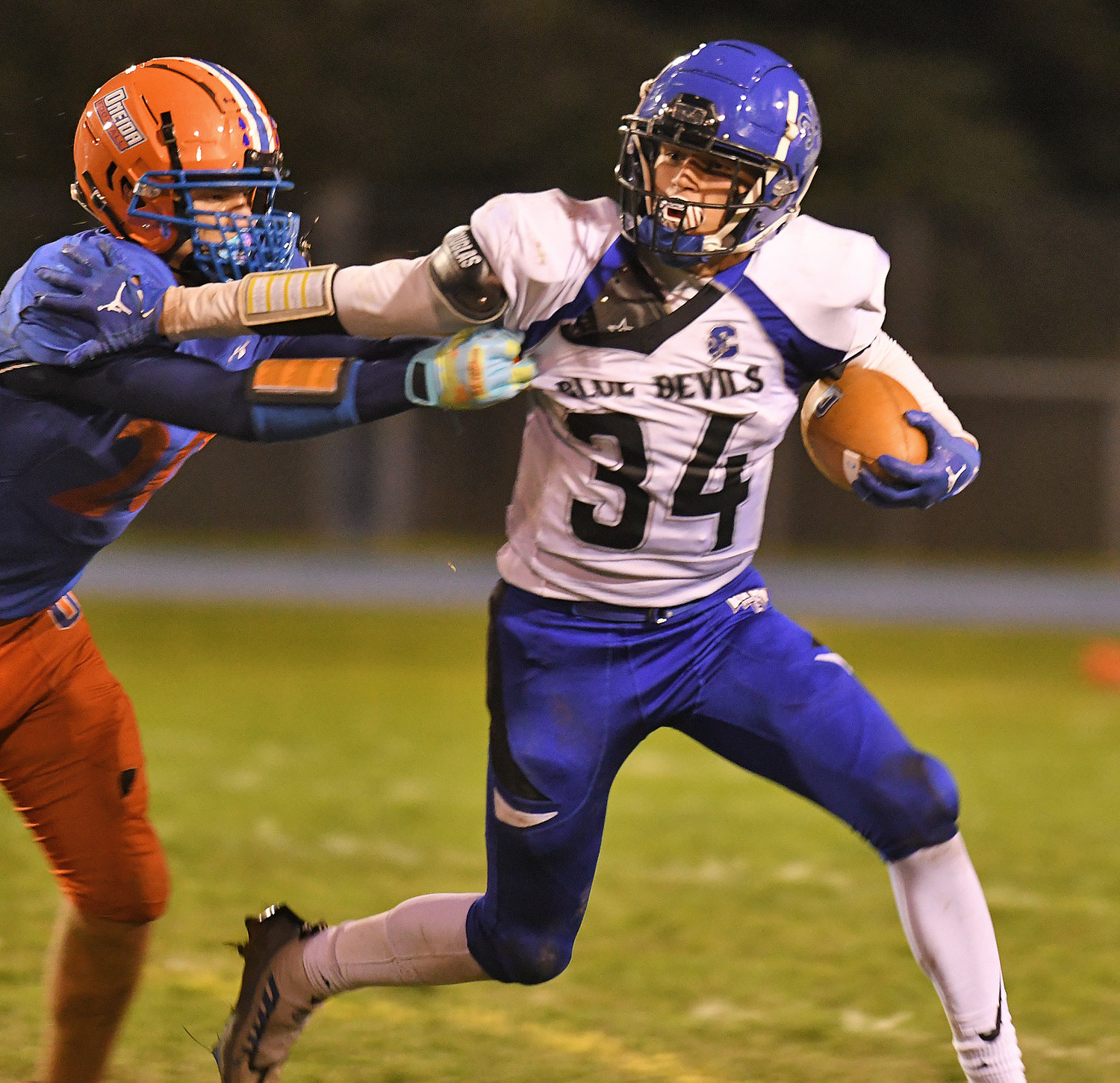 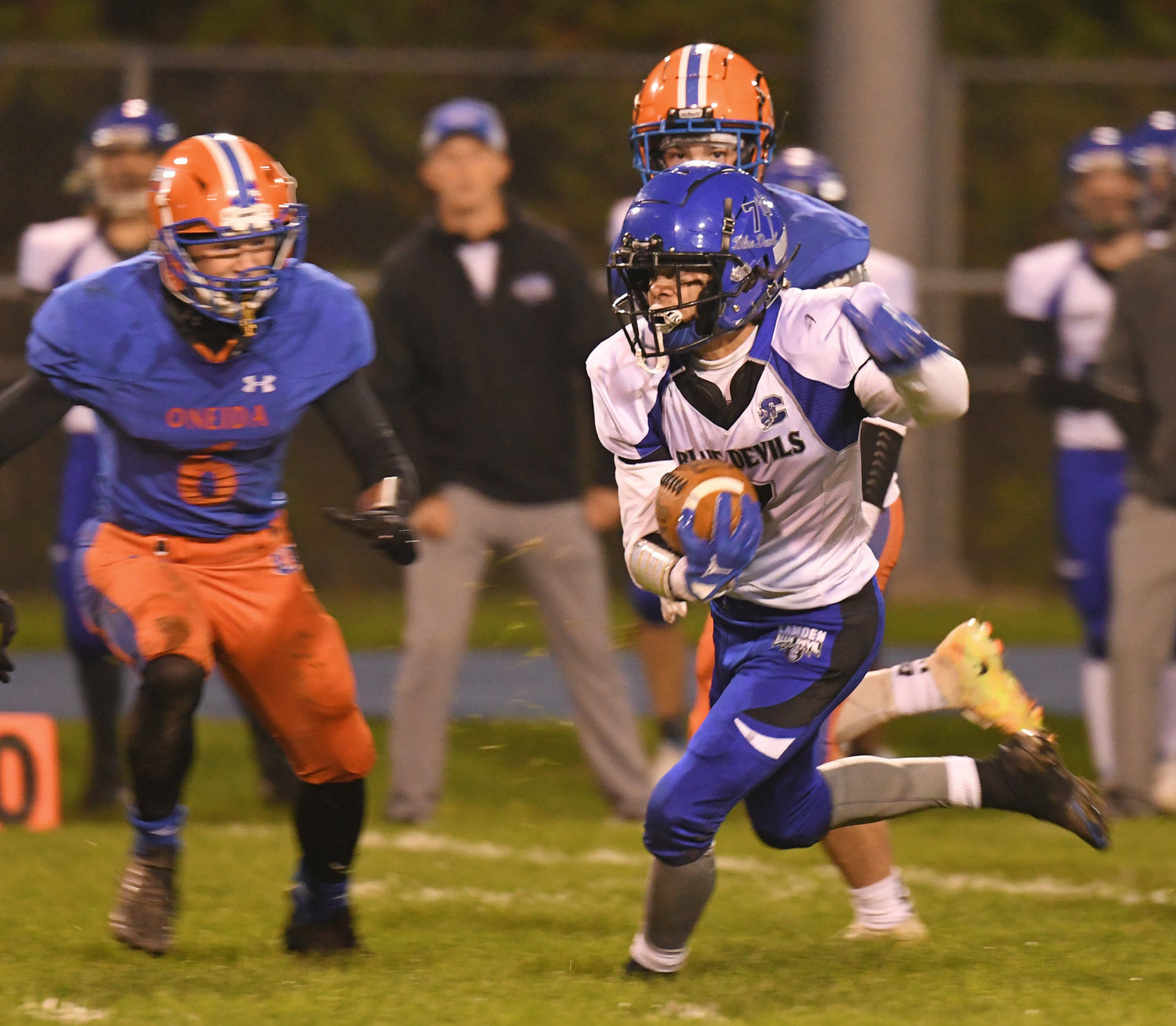 Camden's Trey Kimball weaves through traffic for some of his 85 rushing yards on Friday against Oneida. Kimball also had a touchdown in Camden's 39-20 victory to improve to 3-0.
(Sentinel photo by John Clifford) 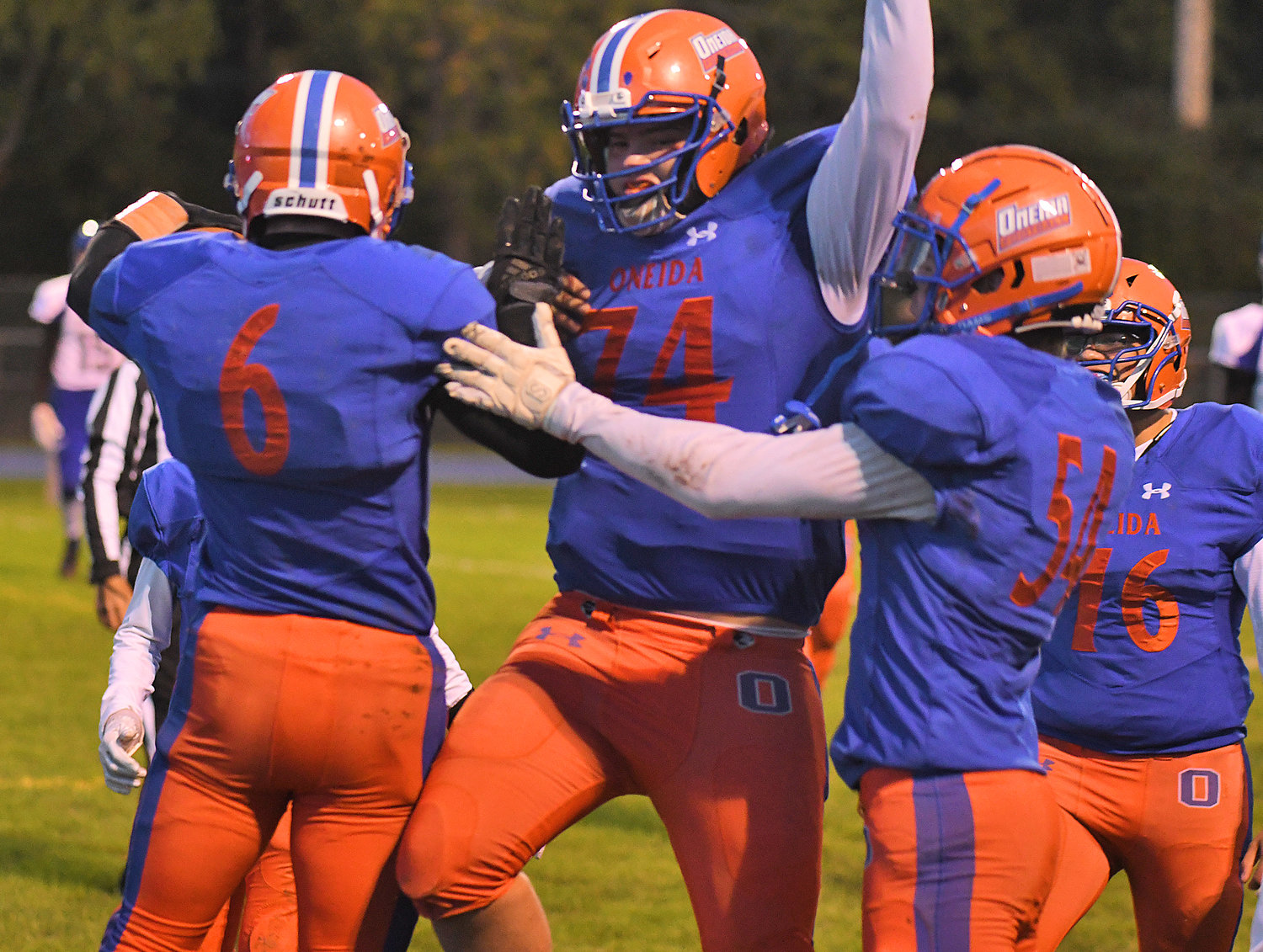 Oneida's Pierce Relyea celebrates a touchdown with teammates including Landen Carter (74) and Landen Fox (54) on Friday night in Oneida. Relyea had two touchdowns and 121 yards rushing for Oneida.
(Sentinel photo by John Clifford) 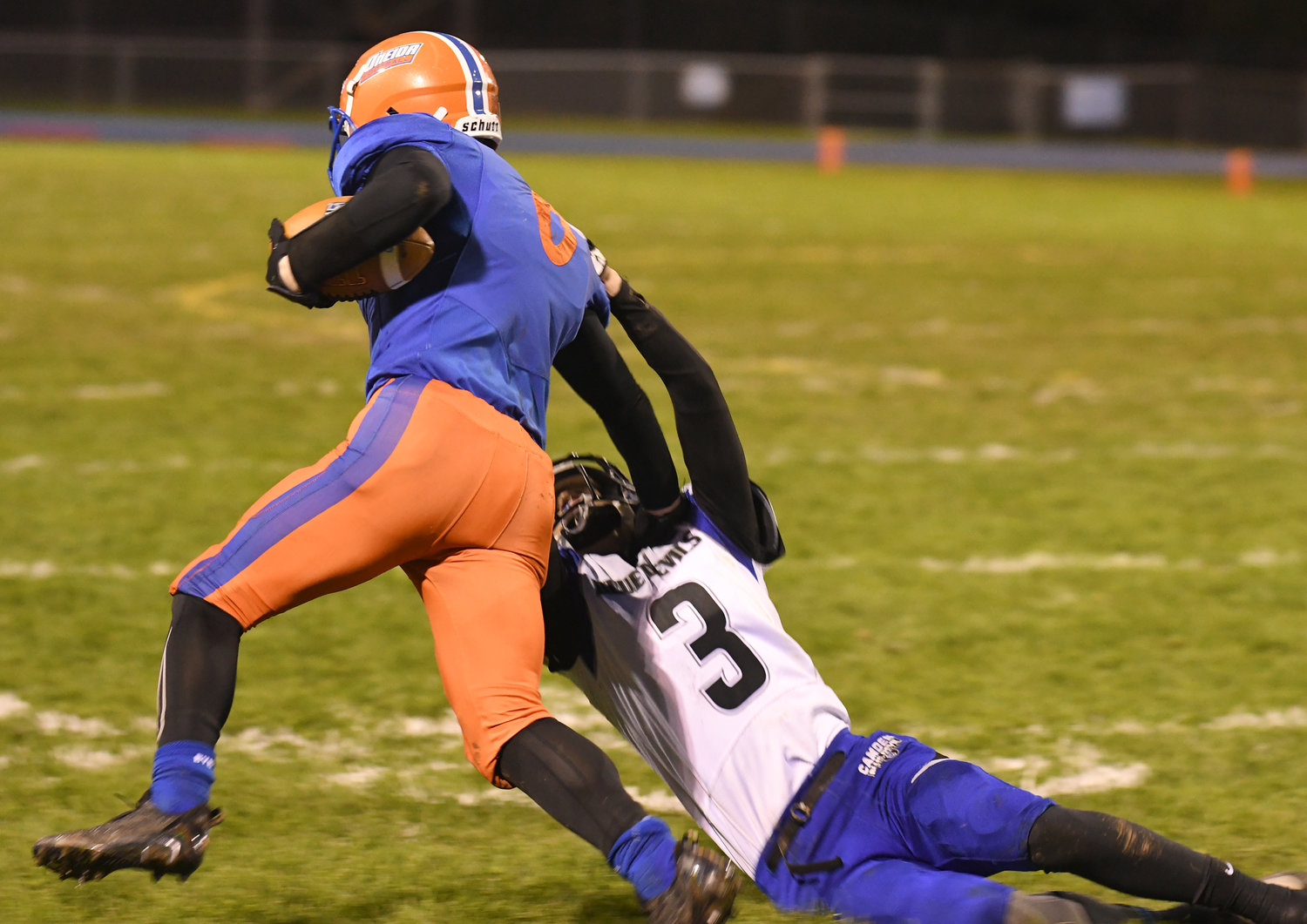 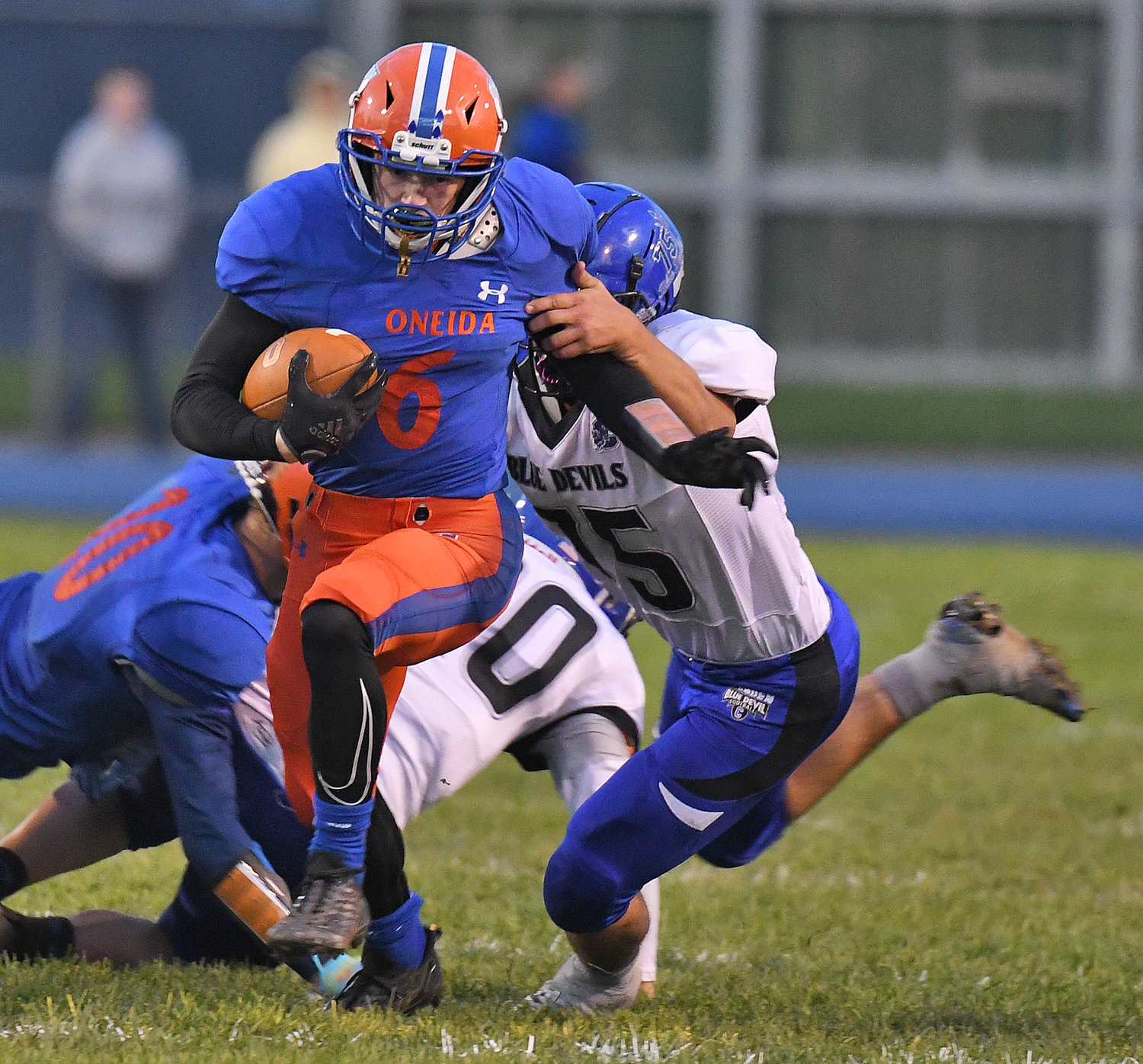 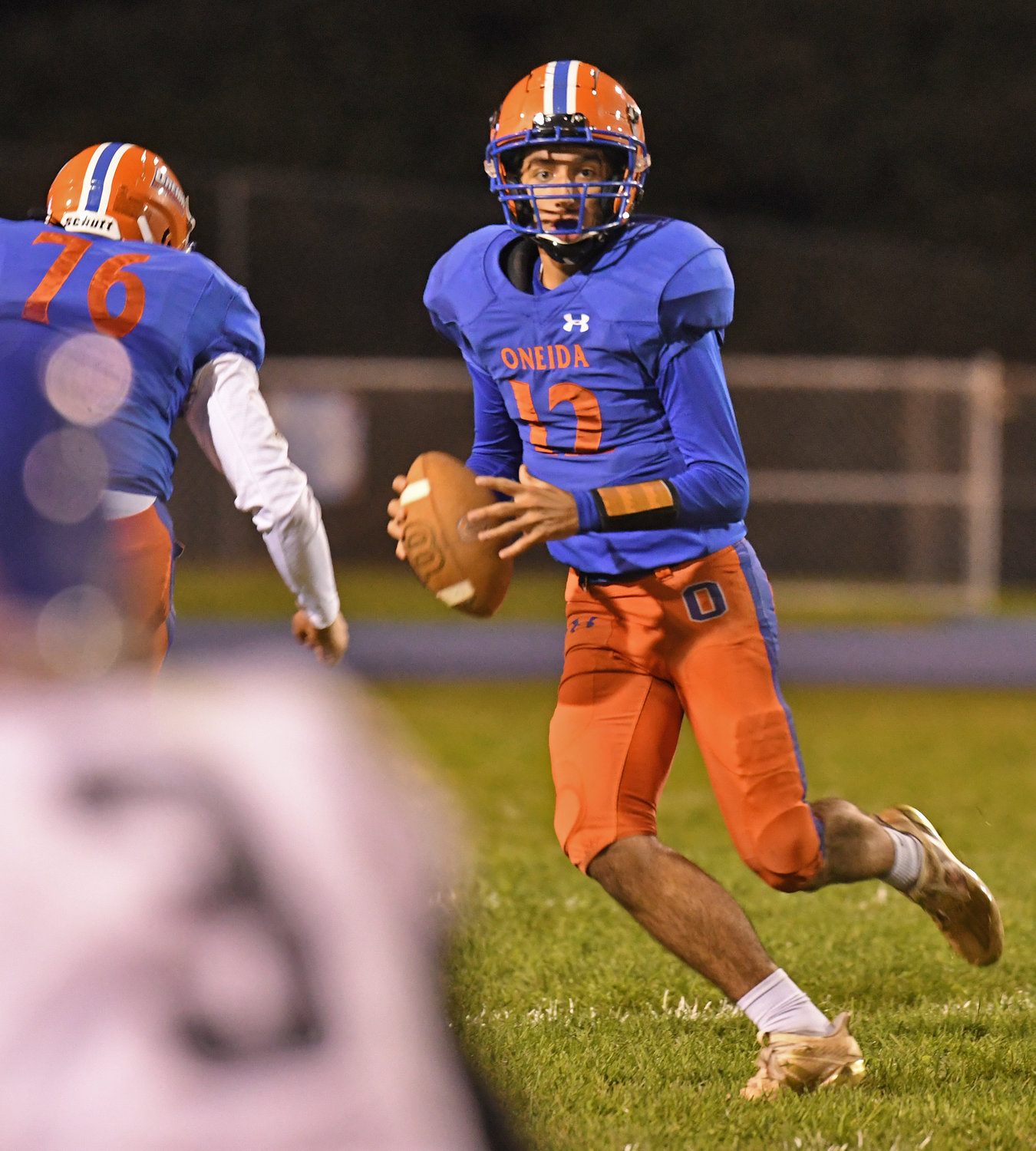 Oneida had a time-consuming drive to open the game with a touchdown and then 10 plays later, Dean had a pass glance off a wide receiver and intercepted by Oneida’s Pierce Relyea.

It had all the makings of a rough night for the Blue Devils.

“I’ve thrown game-losing interceptions, and you just got to say 'that’s on me,'” Dean said. “Our line and defense stepped up, and we kept going from there.”

On the next drive, Camden’s defense forced a three-and-out and Dean scored on the first of three consecutive Camden drives in the second quarter to help the Blue Devils take control.

The senior finished with four total touchdowns and classmates Trey Kimball and Noah Morse also contributed to the Blue Devils’ strong run game in overwhelming host Oneida for a 39-20 Class B victory Friday.

It is believed to be Camden's first win at Oneida in more than 10 years.

Camden is 3-0 overall for the second time in as many seasons with the third win coming over rival Oneida. Camden won 20-18 over Oneida at home last September.

“With this team it is a different feeling,” said Dean, who finished with two rushing touchdowns, two passing scores and contributed an interception on the defensive side. “We don’t rely on one person to get going, we rely on the team. Overall, it is everyone combined to start something to get hot.”

Oneida drops to 1-3 this season under first-year coach Matt McCoy.

“We have to be a little bit more consistent,” said McCoy, whose team is missing a few key players due to injuries. “You have to be consistent and you can’t take plays off. … There some times (Friday) where they opened up gaps and gashed us a few times.”

“My guys bounced back. One of the things we try to teach is about adversity. We definitely faced adversity in that first quarter,” Bates said. “From there our offense took over. One of the things I’m trying to teach these guys is to impose their will on their opponent. The second half we did that.”

Camden scored 22 points in the second quarter to grab a 22-14 halftime lead. In the second half, the Devils sandwiched a 19-yard field goal by Tyler Spencer and short touchdown runs from Dean and Kimball to build the advantage.

Camden totaled 378 yards on offense, including 241 on the ground. Eight players had at least one carry.

Dean finished with 137 yards on 5-of-6 passing and also added 65 yards on 11 carries. He has 10 total touchdowns this season.

“He’s a great kid. He’s a very talented athlete. The little details are getting better,” Bates said. “I just think the world of the kid. I don’t have to coach any athleticism with him. The only thing I have to help him with is his thinking the right things and being a leader. Over the last three years, he’s grown into a fine young man.”

Kimball was also a key part of the effort in finishing with 85 yards on a team-high 17 carries. Morse added 97 yards on 14 carries.

“(Kimball) ran the ball very hard for us,” Bates said. “He showed he’s going to be tough to tackle when he puts his head down and runs. Trey really pounded it out. He played a really physical football game. I think if he can continue to do that in future weeks, it is going to make other guys around him more dynamic.”

Brian Gonzalez and Lyle Walker each had seven tackles for Camden, which has a short week with a game 6:30 p.m. Thursday at Westhill.

Oneida junior Pierce Relyea finished with 121 yards on 10 carries. He finished with two touchdowns, including one in the second quarter that helped get Oneida to within 15-14 before Camden pulled away.

Classmate Bryson Carinci added 90 yards on 20 carries and a late touchdown with Camden’s starters out.

“When everyone does their job, it is pretty easy to win,” said Dean, who credited the play of the offensive line. “It is a pretty good feeling.”

New Hartford got offensive contributions from a few different players in the Class A win.

New Hartford has scored 50 or more points in two of the team's three wins this season.

Standout running back Alex Collver finished with three touchdowns and 102 yards on 15 carries. He has eight touchdowns this season for New Hartford (3-1 overall).

Senior quarterback Dom Ambrose was 11-of-13 passing for 149 yards and a touchdown.

Meier had two rushing touchdowns and two passing — both to Tony Dorozynski — to help Whitesboro (3-1 overall) bounce back from a tough two-point loss to host Proctor last weekend.

With help from with his nine touchdowns against Proctor, Meier has 19 total touchdowns this season.

He had a 30-yard rushing touchdown and a 15-yard pass in the first quarter Friday to help Whitesboro build an early lead.

Memphis Ferguson and Nicholas Polnak each added rushing touchdowns as the Warriors lead 41-0 into the fourth quarter.

Adirondack led 14-0 after one quarter en route to the Class C win.
The Wildcats are 3-0 overall.
Brett Sanford helped lead the way with 136 yards passing and two scores on 7-of-8 passing. He also had a rushing touchdown and 25 yards on three carries.
John Hennessey caught both of Sanford's touchdown passes and finished with 98 yards.
Colin White followed up a big game with a touchdown an 95 yards on eight carries and 8 carries.

Coaches or team representatives should submit scores, stats and highlights after each game to Sports@rnymedia.com.