Tony Bennett spoke with reverence for Terry Holland, and called passing Holland as the winningest coach in Cavaliers history “a we award, not a me award.” 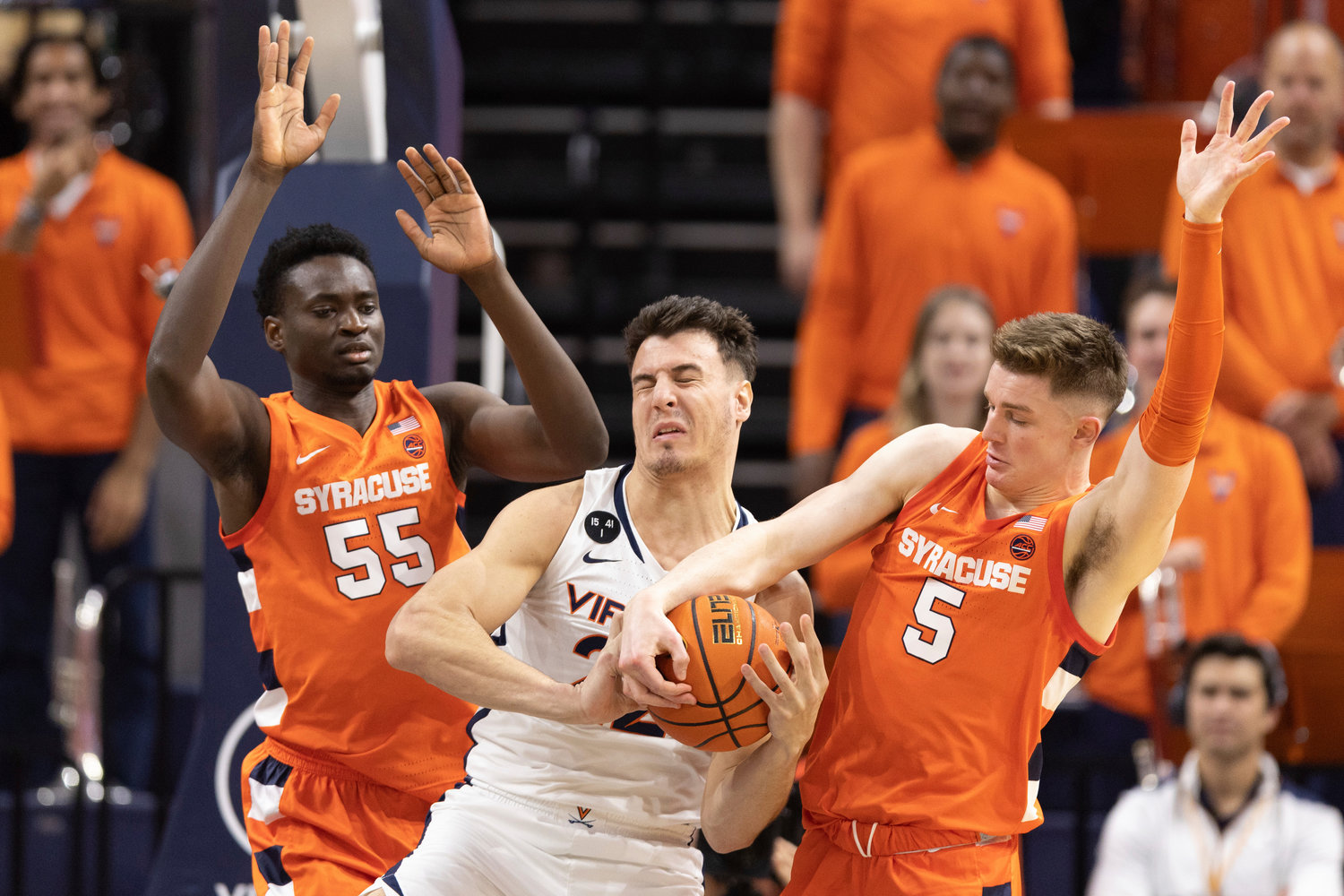 CHARLOTTESVILLE, Va. — Tony Bennett spoke with reverence for Terry Holland, gratitude for all the players he's coached in his career at Virginia and called passing Holland as the winningest coach in Cavaliers history “a we award, not a me award.”

The Cavaliers got Bennett to the milestone on Saturday night, even though they squandered most of a 23-point, second-half lead before hanging on to beat Syracuse 73-66.

Bennett, a three-time national coach of the year and four-time ACC coach of the year, was recognized for the achievement on the court after the game, and his players gave him a Gatorade dousing as he began his postgame remarks in the locker room.

“I'm proud of coach Bennett. He deserves it,” freshman Isaac McKneely said. "He's one of the best for a reason. I wouldn't want to play for anyone else for sure."

Armaan Franklin scored 16 points, Reece Beekman added 13 points and seven assists, and McKneely had 12 points for the Cavaliers (11-3, 3-2 Atlantic Coast Conference). They led 35-26 at halftime and seemed well on their way to their eighth win in the last nine meetings with the Orange when they scored the first 12 points of the second half to lead 47-26.

The Orange (10-6, 3-2) had won seven of their last eight. They trailed by 23 after the Cavaliers' run to open the second half, but used a 16-3 spurt to cut the deficit to single digits as Virginia missed 12 of 13 shots and went nearly nine minutes without a field goal.

Joe Girard III scored 19 points and Judah Mintz had 18 for the Orange. Girard had 14 after halftime and Mintz had 12.

“Our offense got us beat today,” said Syracuse coach Jim Boeheim, owner of 1,008 victories in 47 years. “You know, as poorly as we played defensively and as well as they shot, they had 35 points at halftime. We just offensively took ourselves right out of the game.”

Bennett said he told McKneely to “take the parking brake off” and be more aggressive looking for his shots, and McKneely finished 4 for 7 from beyond the arc.

Teammates have also been telling him the same.

“He knows he can shoot the ball. We all know what he can do. It just a matter of him not passing up shots,” Franklin said.

Syracuse: The Orange scored the last eight points of the first half to close a 17-point deficit to 35-26. One of the nation's top shot-blocking teams, they got three rejections from Mounir Hima in just 4 1/2 minutes of first-half action and finished with seven blocks.

Virginia: Seven of the Cavaliers' 12 first-half field goals were 3-pointers, with Franklin and McKneely each hitting three, and they made 12 3s in all and only 11 shots from inside the arc. ... Jayden Gardner's first rebound made him the only active player in Division I with 2,000 career points and 1,000 rebounds. ... The Cavaliers had 22 assists on 23 field goals, with Kihei Clark leading the way with 11.

Syracuse is at home against Virginia Tech on Wednesday night.

Virginia is at home against North Carolina on Tuesday night.