France calls for European aid after 27 migrant deaths at sea 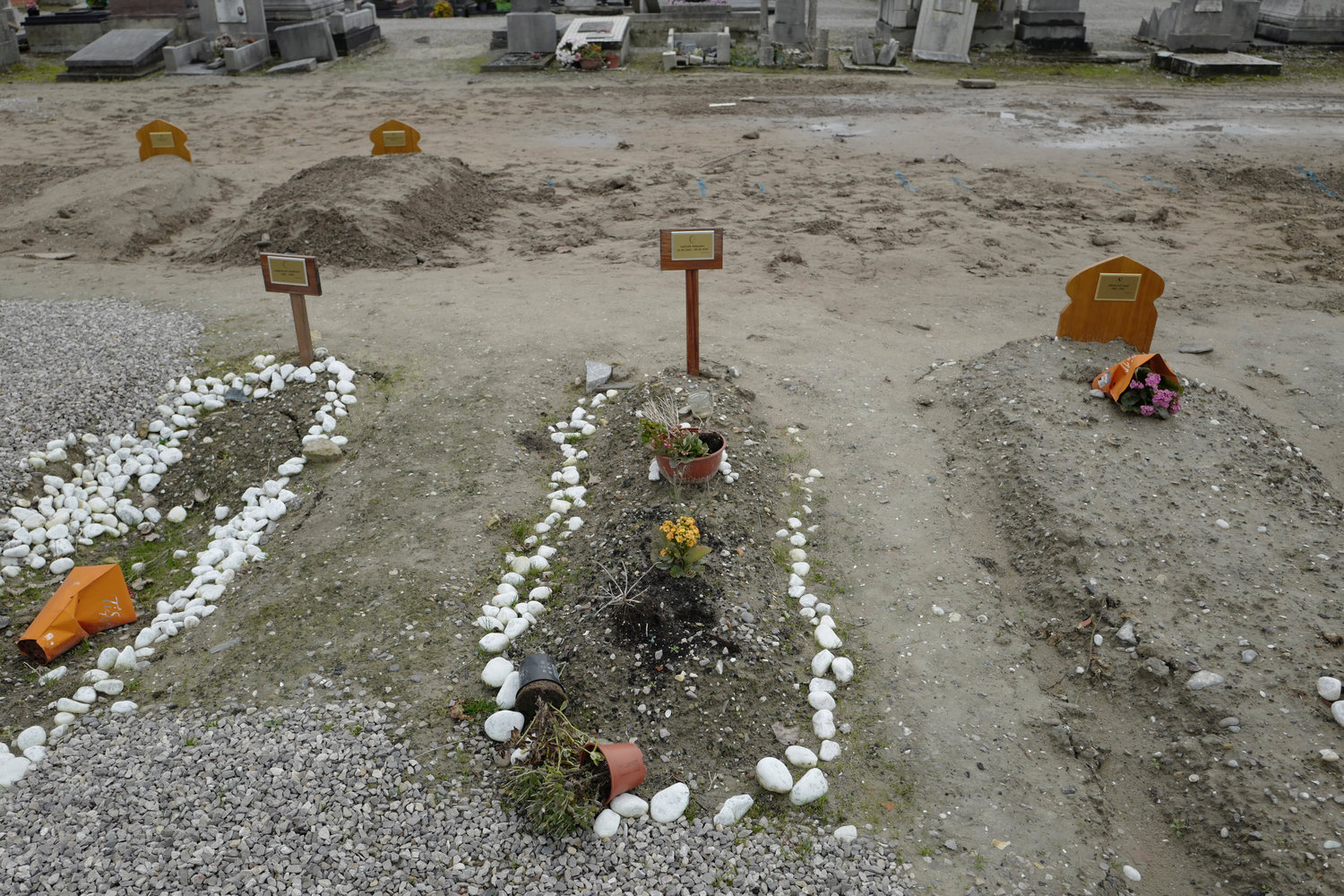 VICTIMS — Recent graves of migrants who died in their attempt to cross the English Channel are pictured in the Nord Cemetery of Calais, northern France, Thursday.
AP Photo
Posted Friday, November 26, 2021 7:08 am

CALAIS, France (AP) — Helicopters buzzed above the waves and vessels were already scouring the cold waters when French maritime rescue volunteer Charles Devos added his boat to the frantic search for a flimsy migrant craft that foundered in the English Channel, killing at least 27.

What Devos found was gruesome. But not, he later sorrowfully acknowledged, wholly unexpected. With migrants often setting off by the hundreds in flotillas of unseaworthy and overloaded vessels into the busy shipping lane crisscrossed by hulking freighters, and frequently beset by treacherous weather, waves and currents, Devos had long feared that tragedy would ensue.

That came this week, with the deadliest migration accident to date on the dangerous stretch of sea that separates France and Britain.

“We picked up six floating bodies. We passed by an inflatable craft that was deflated. The little bit of air remaining kept it afloat,” Devos told reporters.

“I’d been somewhat expecting it because I’d say, ‘It’s going to end with a drama,’” he said.

France and Britain appealed Thursday for European assistance, promised stepped-up efforts to combat people-smuggling networks and also traded blame and barbs in the wake of Wednesday’s deadly sinking that again shone a light on the scale and complexity of Europe’s migration problems.

French President Emmanuel Macron appealed to neighboring European countries to do more to stop illegal migration into France, saying that when migrants reach French shores with hopes of heading on to Britain “it is already too late.”

Macron said France is deploying army drones as part of stepped-up efforts to patrol its northern coastline and help rescue migrants at sea. But he also said that a greater collective effort is needed, referring to France as a “transit country” for Britain-bound migrants.

“We need to strengthen cooperation with Belgium, the Netherlands, Germany, but also the British and the (European) Commission,” he said on a visit to Croatia. “We need stronger European cooperation.”

Migration is an explosive issue in Europe, where leaders often accuse one another of not doing enough to either prevent migrants from entering their countries or from continuing on to other nations.

Ministers from France, Germany, the Netherlands, Belgium and Britain and EU officials will meet on Sunday to discuss increasing efforts to crack down on migrant-smuggling networks, Macron’s government announced.

They will convene in Calais, one of the French coastal towns where migrants gather, looking for ways to cross to the British coast that is visible from France on clear days.

Seaside communities on both sides of the channel were reeling Thursday from the sinking’s horrific toll.

“This was unfortunately something that could have been foreseen, a scenario of horror that we’d feared and dreaded,” said Ludovic Hochart, a police union official in Calais.

Across the channel, in the British port of Dover, small business owner Paula Elliot said: “It’s dreadful that people have lost their lives.”

“The vessels that they take, are traveling in, are not fit for purpose,” she said. “They probably don’t understand how arduous the journey is going to be, and especially at this time of year, it’s so much colder than in the summer.”

Devos, the rescue volunteer, told reporters in comments broadcast by coastal radio Delta FM that the flimsy craft used by migrants for the crossing are increasingly overloaded, with as many as 50 people aboard.

Macron described the dead in Wednesday’s sinking as “victims of the worst system, that of smugglers and human traffickers.”

France has never had so many officers mobilized against illegal migration and its commitment is “total,” he said.

Ever-increasing numbers of people fleeing conflict or poverty in Afghanistan, Sudan, Iraq, Eritrea or elsewhere are risking the perilous journey from France, hoping to win asylum or find better opportunities in Britain.

The crossings have tripled this year compared to 2020. French authorities said Wednesday’s was the deadliest migration tragedy in the channel since seven migrants died in October 2020. Shipwrecks on that scale, however, are not uncommon in the Mediterranean Sea, where just this year about 1,600 people have died or gone missing, according to U.N. estimates.

Interior Minister Gerald Darmanin said children and pregnant women were among the dead. Two survivors from the sinking were treated for hypothermia. One is Iraqi, the other Somali, Darmanin said. He said authorities are working to determine the victims’ nationalities.

Macron’s government vowed to bring those responsible for the tragedy to justice, piling pressure on investigators. Darmanin announced the arrests of five alleged smugglers who he said are suspected of being linked to the sinking. He gave no details about the alleged links. The prosecutors’ office investigating the deaths confirmed five arrests since Wednesday but said they didn’t appear to be linked to its probe.

Darmanin said a suspected smuggler arrested overnight was driving a vehicle registered in Germany and had bought inflatable boats there.

He said criminal groups in Belgium, the Netherlands, Germany and Britain are behind people-smuggling networks. He called on those countries to cooperate better against smugglers, saying they don’t always respond fully to French judicial requests for information.

“Britain and France must work together. We must no longer be, in effect, the only ones able to fight the smugglers,” the minister said.

In their immediate response to the sinking, French authorities initially gave differing figures on the number of dead, from at least 27 to 31. The figure that Darmanin used Thursday morning on RTL radio was 27.

The minister also took a swipe at British government migration policies, saying France expels more people living in the country without legal permission than the U.K. Illegal migration from France’s northern shores to Britain has long been a source of tension between the two countries, even as their police forces work together to try to stop crossings. The issue is often used by politicians on both sides pushing an anti-migration agenda.

He also suggested that by hiring people living in the country illegally, British employers are encouraging illegal migration to English shores.

“English employers use this labor to make the things that the English manufacture and consume,” he said. “We say ‘reform your labor market.’”

U.K. officials, meanwhile, criticize France for rejecting their offer of British police and border officers to conduct joint patrols along the channel coast with French police.

He and Macron spoke after the tragedy and agreed “to keep all options on the table to stop these lethal crossings and break the business model of the criminal gangs behind them,” Johnson’s office said.

Macron advocated an immediate funding boost for the European Union’s border agency, Frontex, according to his office.

“France will not allow the Channel to become a cemetery,” Macron said.