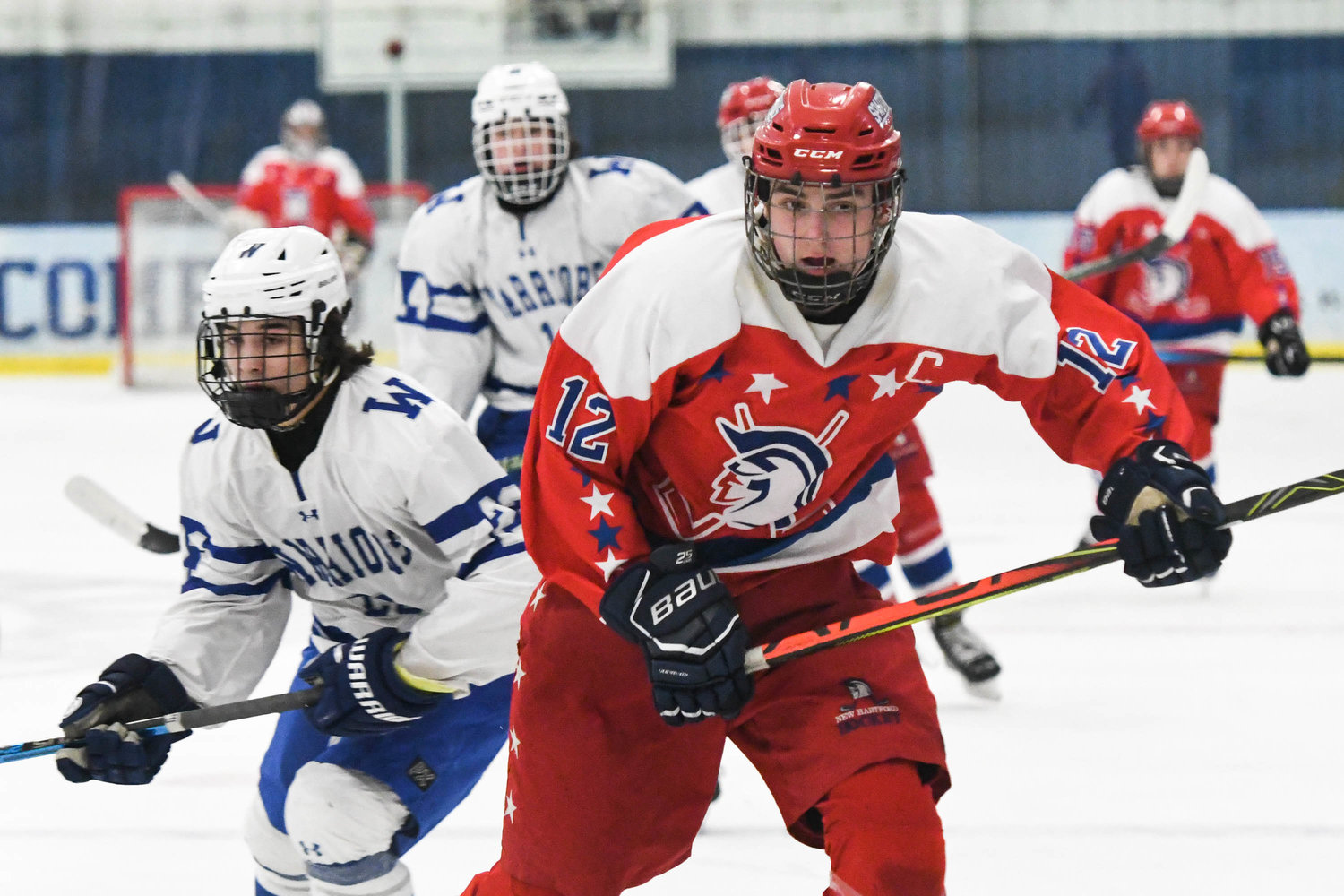 MAKING A PLAY — New Hartford player Will Gall (12) races toward the puck during the game against Whitesboro on Tuesday at Whitestown Ice Rink. He had a goal and two assists in New Hartford’s win. The Spartans won 5-2.
(Sentinel photo by Alex Cooper) 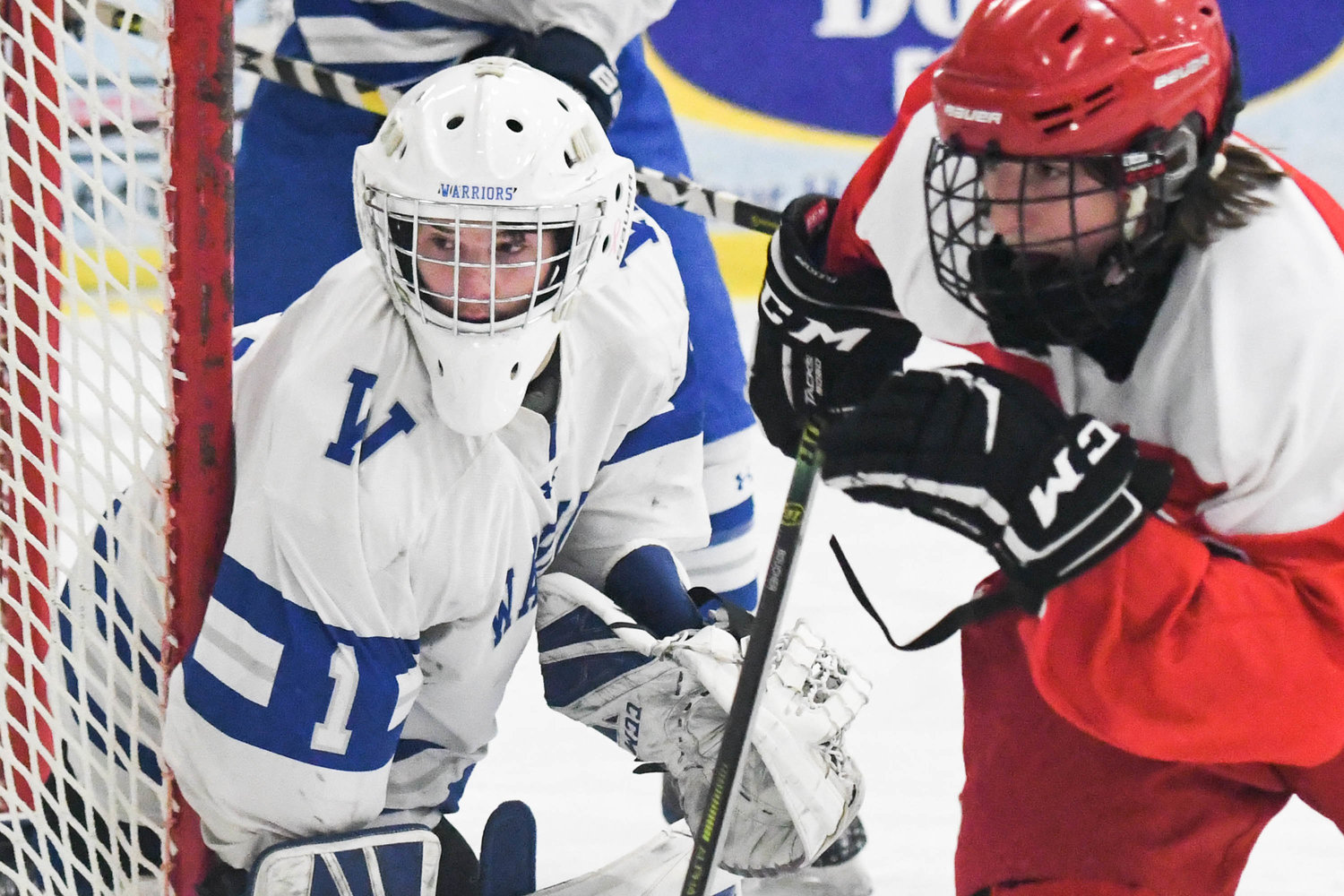 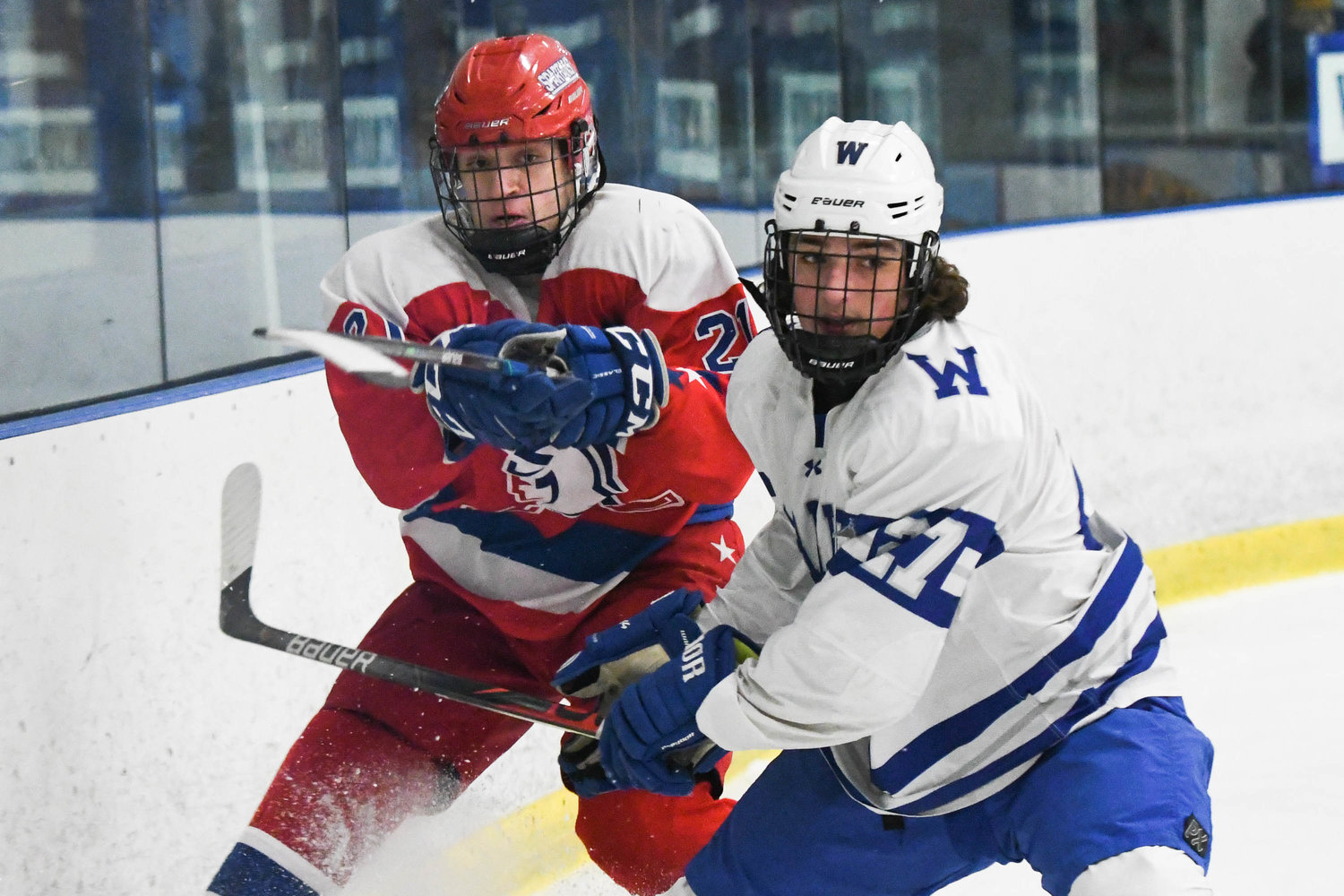 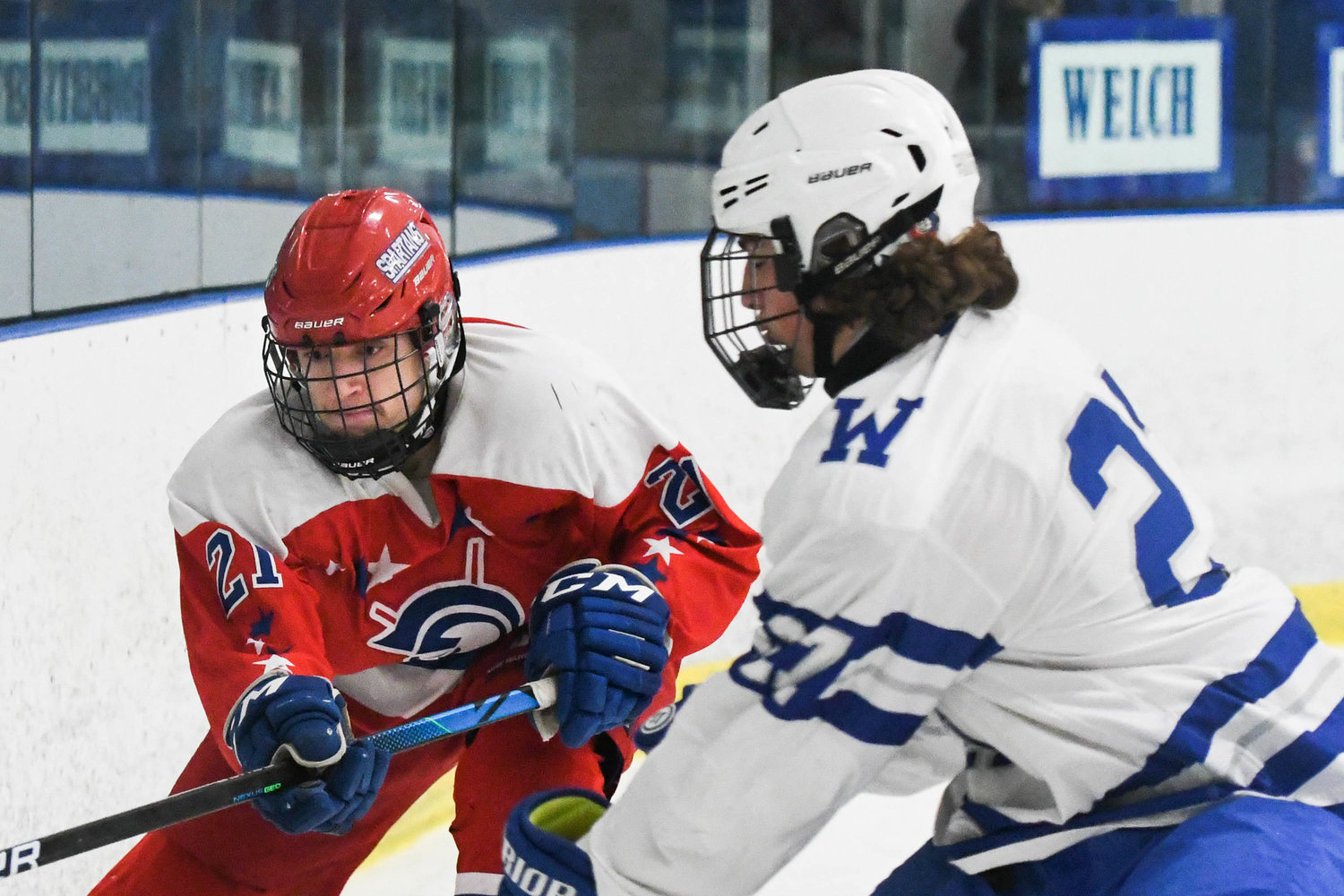 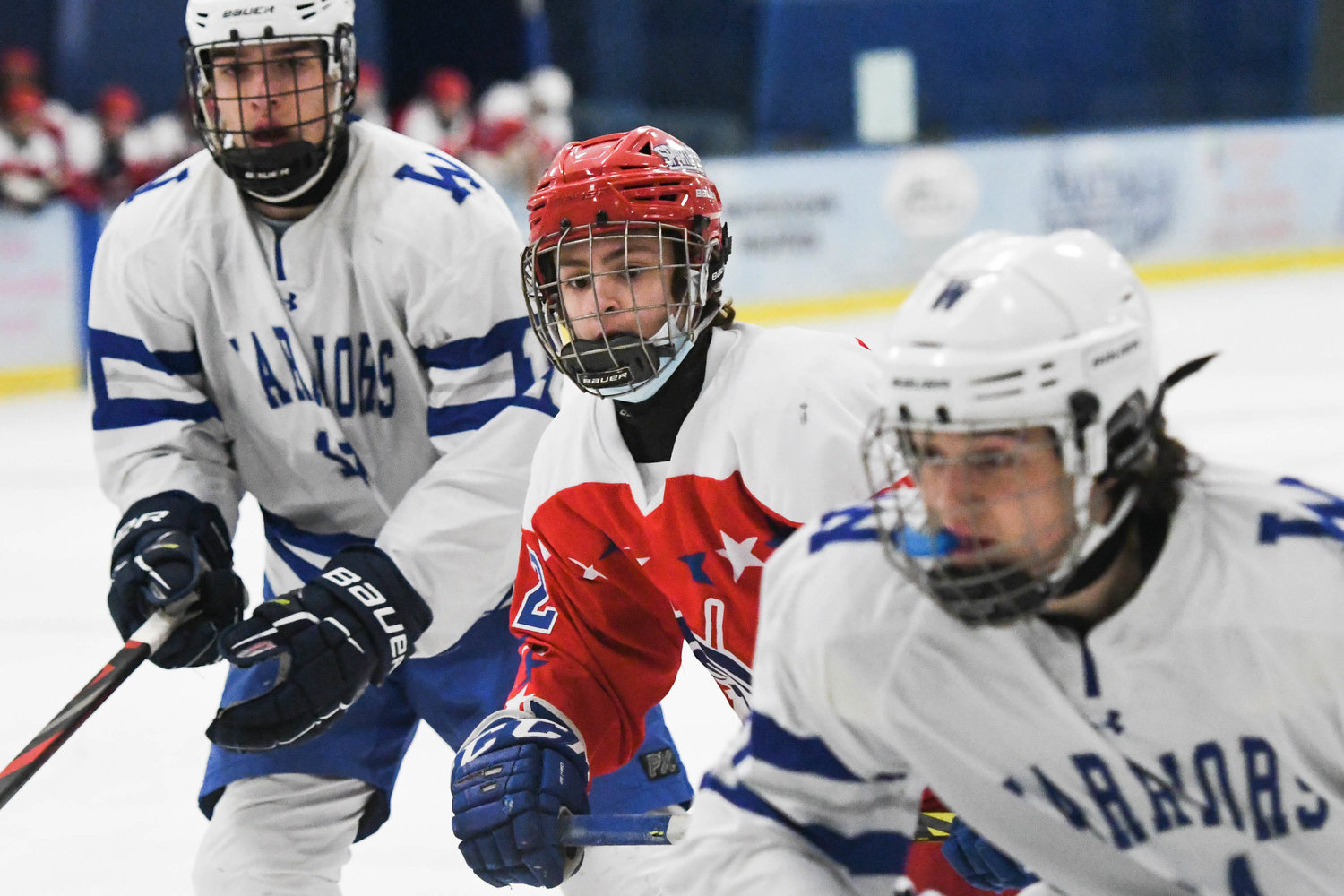 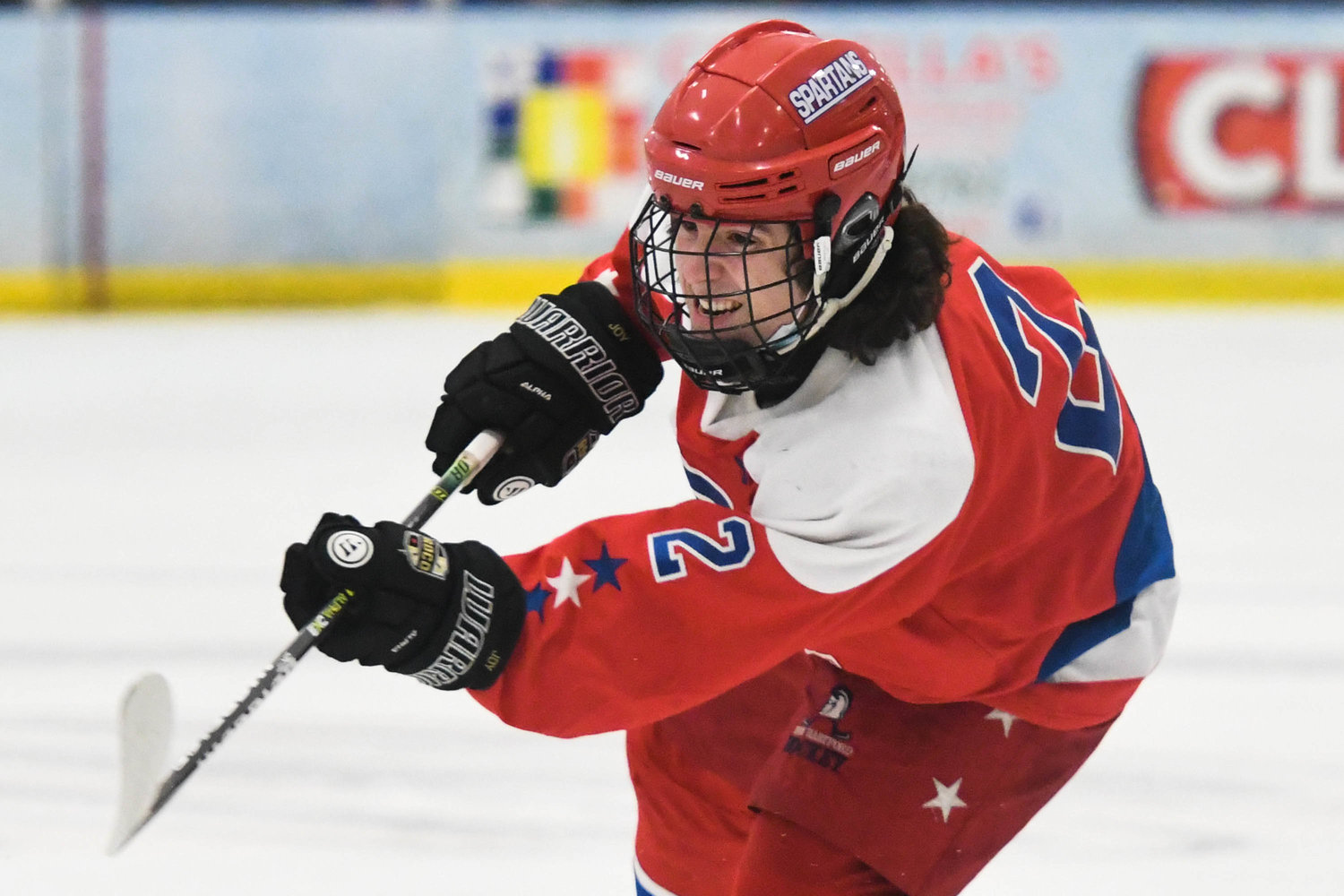 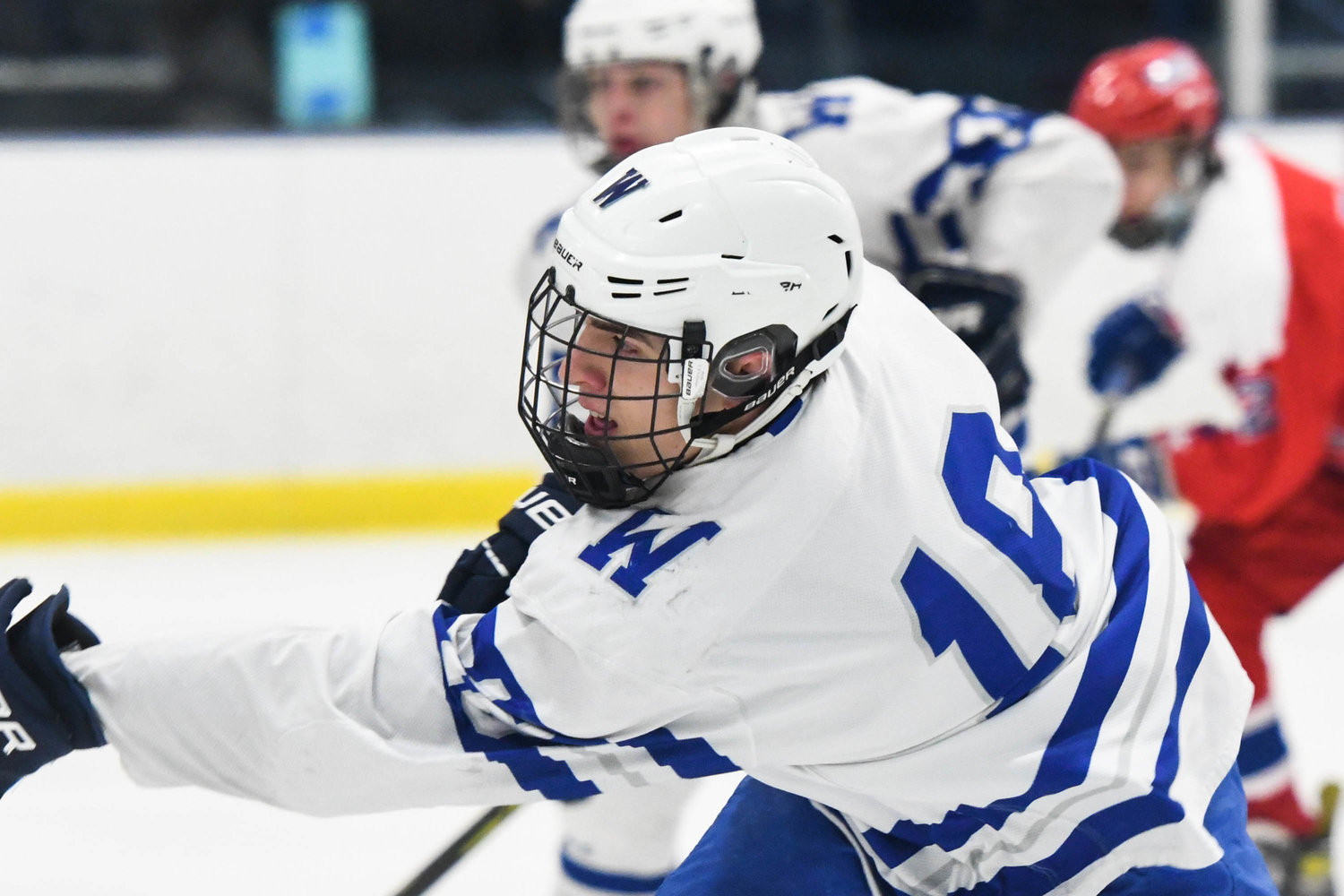 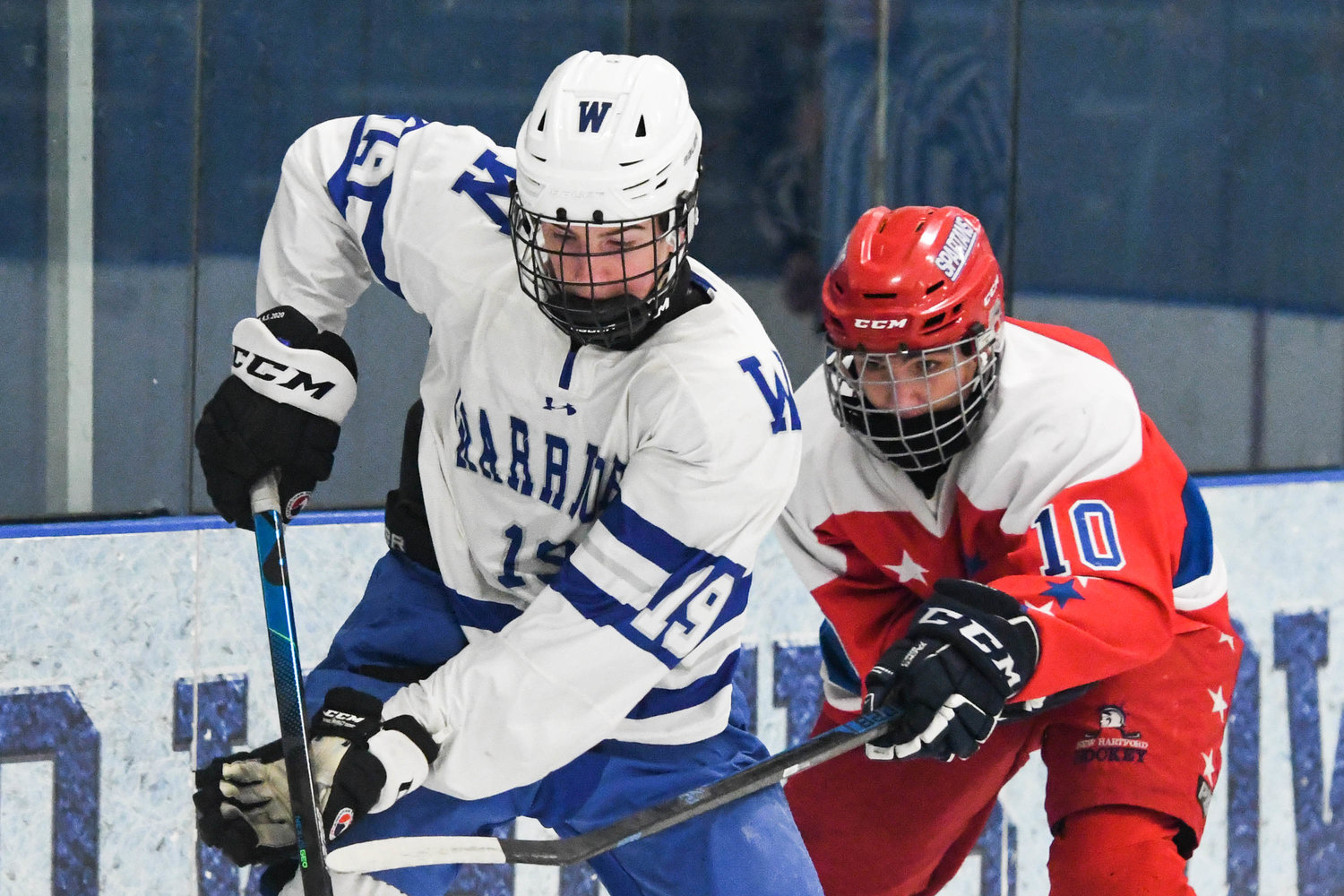 The Black Knights bounced back from a 5-1 loss at home to Cazenovia Tuesday with a win that will go a long way toward earning the team a home game in the opening round of the postseason.

Nick Toth-Ratazzi scored his first two goals of the season for RFA. Tyler Lokker scored two as well, pushing his team-leading total to 12. Jake Premo and Tyler Wilson each tallied a goal and an assist. Antonio Bevilacqua also scored. Earning an assist each were Nate Van Wie, Chris Brement and Luke Haag.

Lenny Dormio made 16 saves and allowed a goal in net for the win. Braeden Sturtevant played the last six minutes in goal for RFA, with six saves and two goals allowed.

RFA improves to 5-10-3 overall and is 3-5-2 in Division I. The Black Knitghts close out the regular season on Senior Night at 7 p.m. Friday hosting league foe Fayetteville-Manlius.

New Hartford was led by Will Gall, who had a goal and two assists. Chuckie Gaetano had two assists and Anthony Falvo, Gabe Syrotinski and Caden Kramer each had goals.

Derek Joy finished with 27 saves for the Spartans.

Logan Lachacz and Frankie Centro each had a goal and assist for Whitesboro.

The Utica Notre Dame girls basketball team raced out to a 16-5 first quarter lead then finished off Whitesboro with a 19-3 fourth quarter to get a 52-28 Tri-Valley League at home Tuesday.

Maggie Trinkhaus led the Jugglers with a dozen points as well as five rebounds. Alexa Durso scored nine and had three assists, three steals and a pair of rebounds.

Statistics for Whitesboro were not submitted.

Whitesboro wraps up the regular season with a home game against Oneida at 7 p.m. Friday in the league.

Notre Dame has one more regular season game left as well, at 5 p.m. Tuesday at Vernon-Verona-Sherrill in the TVL.

The Sauquoit Valley girls basketball team scored two points in the first quarter Tuesday at home against Mount Markham but battled back and won 42-37 in the Center State Conference.

Sauquoit outscored Mount Markham 18-11 in the second to lead 20-18 at the break. The Mustangs grabbed the lead back and were up by three headed into the fourth quarter but the hosts outscored them by eight in fourth for the win.

Individual statistics for both teams were not submitted.

Sauquoit ends the regular season at Canastota at 7 p.m. Friday in a non-league game.

Poland takes over in second half

The Poland girls basketball team led by one at the half but broke out for a 52-39 road win over Oriskany Tuesday in the Center State.

For Oriskany, Ashley Reid led the way with 20 points.

Oneida is now 7-5 and will play a league game on the road against Sauquoit Valley at 6:45 p.m. Friday.

Emma Friedel continued to be a key contributor, totaling 25 set assist, one kill, three aces, and 10 digs. Taylor Krol lead with 10 kills and had 16 digs. Elise Courto had eight kills and 12 digs. Rosalind Lampert had 19 digs and a set assists.

The Spartans are set to play for the Class A section title at 4 p.m. Saturday at Jamesville-DeWitt High School.