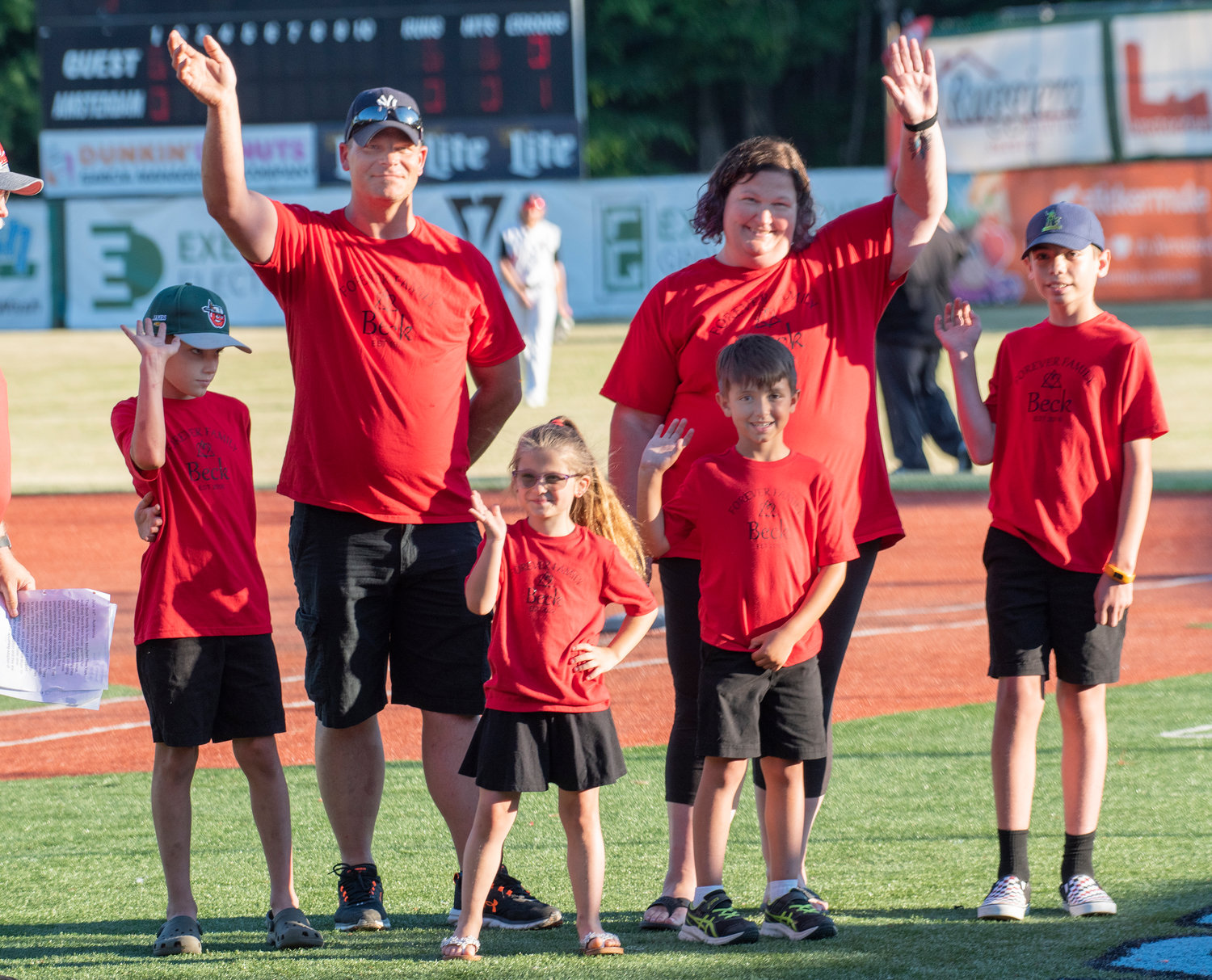 The Beck Family waves to the crowd as they were honored for their years as a foster family and their recent adoption of Audrianna, front center, after she threw out the first pitch at Tuesday, June 14, at the Amsterdam Mohawks game at Shuttleworth Park in Amsterdam.
(The Recorder/Stan Hudy) 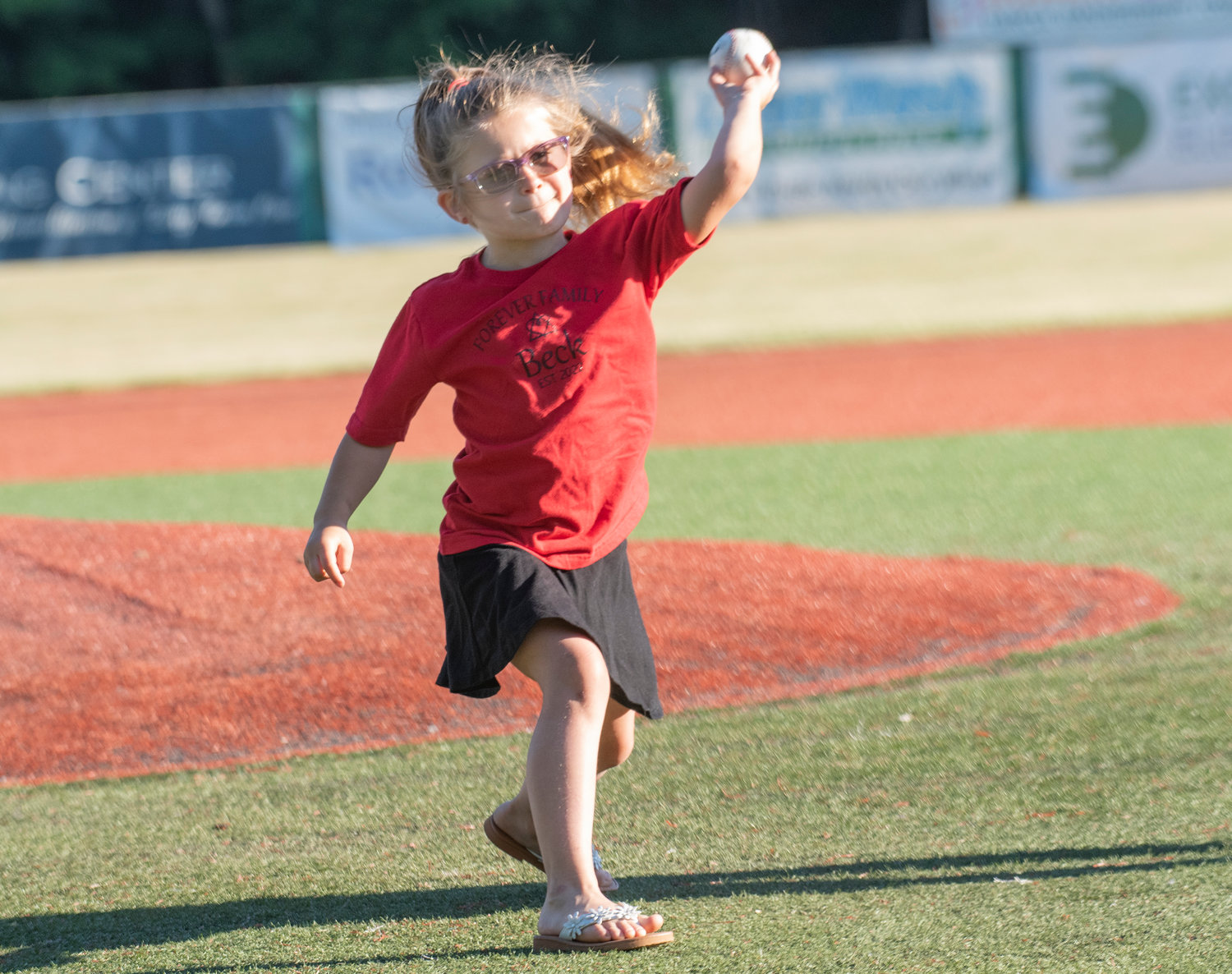 Audrianna Beck looks like a crafty left-handed pitcher on her throw to home plate, honored with throwing out the first pitch at Tuesday, June 14, 2022 Amsterdam Mohawks game at Shuttleworth Park in Amsterdam.
(The Recorder/Stan Hudy)
Previous Next
Posted Wednesday, June 22, 2022 5:16 pm
Andrew Waite via Associated Press

AMSTERDAM — Tammi and Steve Beck lost more than 10 pregnancies. They dealt with ectopic pregnancies, tried in vitro fertilization and lost one baby at 13.5 weeks.

So, despite really wanting children, the Becks, of Mayfield, figured parenting wasn’t their path. They looked into adoption, but decided it was too expensive.

Then, at a fair in 2015, Tammi found a flier on the ground for Northern Rivers Family of Services, an agency that trains foster parents, connects them to kids and provides regular resources including weekly check-ins and therapeutic support.

Tammi tucked the flier in her pocket and decided to call the number when she got home.

Roughly seven years later, the Becks, 41 and 43, were celebrating the adoption of their fourth child, Audrianna, whom the Becks officially adopted in May after bringing her into their home as a foster child last February.

On Tuesday evening, Audrianna threw out the first pitch at an Amsterdam Mohawks’ baseball game to raise awareness for the need for foster families, much in the way the Northern Rivers flier at the fair first made the Becks consider becoming foster parents. Friday is also Northern Rivers’ Foster Care Night at the Mohawks’ game.

The need for foster families is as great as it has ever been, especially as the pandemic has stressed families and made childcare and other services tougher to access, potentially putting families in less of a position to take on children, said Star Gregory, director of Foster Care Recruitment and Retention at Northern Rivers. Serving the greater Capital Region and the Southern Tier through seven offices, Northern Rivers works with about 275 foster children, and in its 190-year history, it has supported 18,000 children, adults and families throughout 41 counties in New York.

“There are never enough homes. There’s always been a need, and right now the need is extreme,” Gregory said.

The May numbers from Northern Rivers’ Gloversville office alone illustrate the point. While the office had 52 kids in need of placement, the office was only able to find homes for two children because of a lack of available foster homes in the Mohawk Valley region, said Trista Gordon, program coordinator for the Therapeutic Foster Family Program at Northern Rivers.

Foster care can take on many forms, Gordon and Gregory explained. Some families bring children into their homes looking to adopt. Others take in children for short periods of time. In fact, during the pandemic, foster parents have been able to watch children as their caregivers recovered from COVID-19, said Gordon.

“You’re not coming into foster care to rescue a child; you’re coming into foster care to support a family. And sometimes supporting that family might mean adopting that child, but it also might mean maintaining a connection with the birth family,” Gordon said. “The main thing is do you want to parent? And for people who already have children, I would say, can you bring one more with you?”

The Becks, who work for the Town of Johnstown (Steve) and a pharmaceutical company (Tammi), certainly wanted to parent. But they never quite expected their foster experience to work out the way it did.

When working with Northern Rivers, the process begins with an orientation and 10-week training and certification program, which is a time for the family and the agency to assess if foster parenting is going to work in this particular instance.

Trainings cover everything from what to expect of children’s needs to learning how to manage and understand grief and loss to an overview of the foster care system.

The day after the Becks became certified was the day they were given their first placement, Tammi said.

They wanted a kid four or younger, and they got a 4-year-old boy, Ayden. But they were also asked if they could take in the boy’s 2-year-old and 5-month old brothers, Maddex and Gavin.

The Becks slept on it for a night, but ultimately agreed.

It was rough in the early going, Tammi said. The first night was sleepless and involved pulling a bunk bed apart after one of the older boys feared falling out of the top level.

When Tammi dropped Ayden off at school the next morning, he was screaming and crying.

But things changed when she picked him up.

“He saw me, and he ran to me, and from then on it was like he was a completely different child,” Tammi said. “It was like all the anxiety – or whatever was in him – left.”

The boys had been bounced around from home to home, so Tammi thinks Ayden and his brothers just wanted a less transitory life – they wanted a family.

In fact, when the Becks took the boys for a vacation in Maine early after being matched with them, Ayden thought a vacation meant Tammi would drop him off permanently at somebody else’s house.

But after first matching with the boys in May, the Becks took them in full-time in July, Tammi said. The Becks officially adopted the boys four years later.

Even with three boys, the Becks kept their home open to fostering, thinking they might want to adopt a girl. They took in babies for a short while, knowing it would just be temporary.

“That was the first time we ever experienced kids going home. It was very hard on all of us, but we talked with the boys, and Ayden said if we can give somebody four good months out of their life, it’ll be worth it,” Tammi said.

Then, in February of last year, the Becks took in Audrianna, now 7. They finalized her adoption last month.

After throwing out the first pitch at the Mohawks’ game, Audrianna was all smiles, sitting with family and friends in a private deck at Rao Family Stadium at Shuttleworth Park as the baseball game played out below. Audrianna said these kinds of experiences are a big part of what she loves about her family – they take care of her, yes, but they also take her to fun places, providing her the kind of full and exciting life she never used to have.

“They took me to Disney,” Audrianna said of what she likes about the Becks, prompting laughter from Tammi. “And at Christmastime we went to see the lights.”