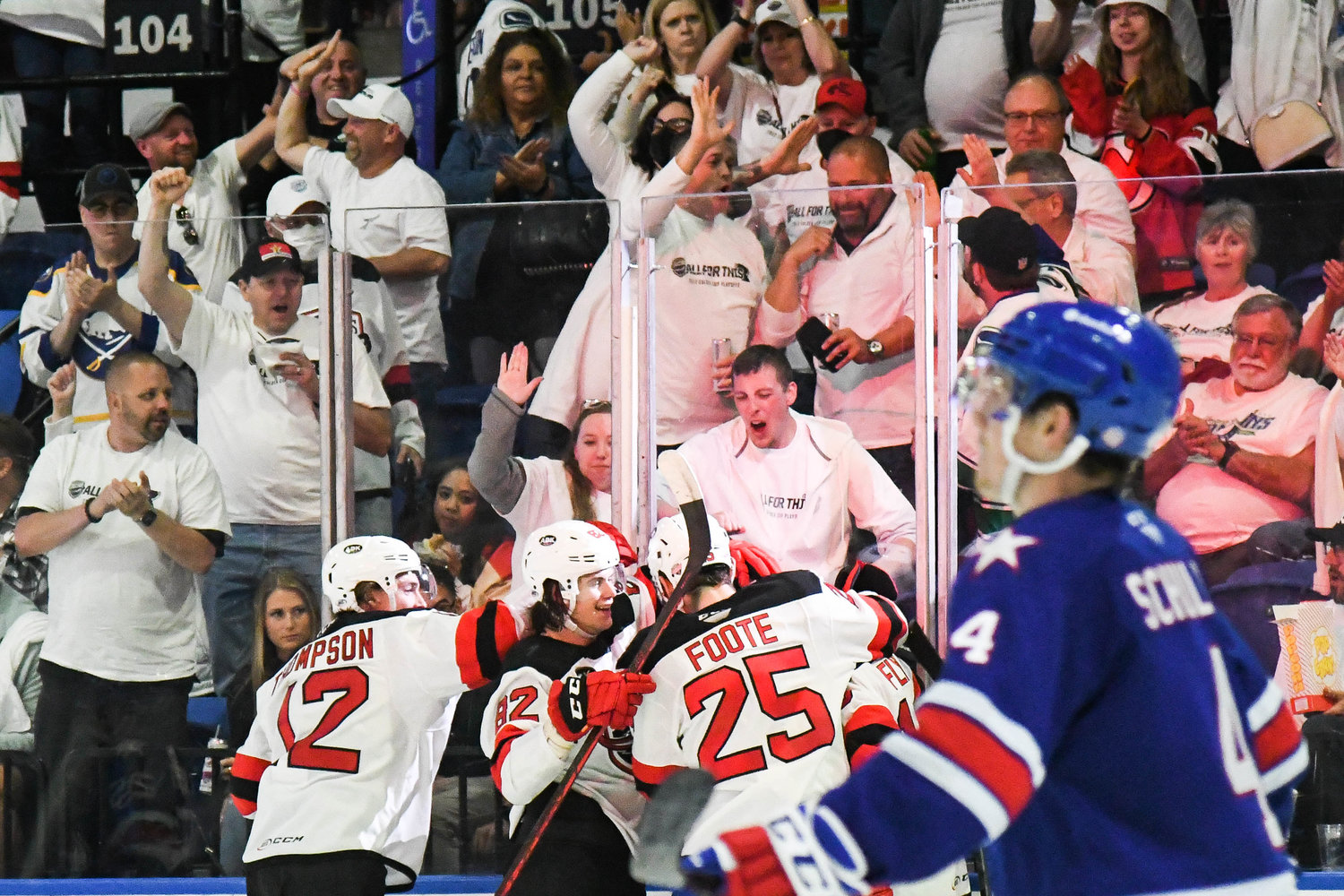 UTICA — It is all about learning for Nolan Foote.

For the 6-foot-4 Foote playing in his first full American Hockey League, that means the 21-year-old winger is getting his first experience with playoff hockey in the pros while developing into a power forward while playing with the Utica Comets.

The big-bodied New Jersey Devils prospect turned in a solid performance as the Comets rallied for a 6-3 win Tuesday over Rochester in Game 1 of the North Division semifinals.

He’s among 20 players on the Comets roster who are playing in their first pro postseason.

“It was real exciting. Obviously, last year with the COVID year and now to have a full barn we have great fans. It was cool with the whiteout (atmosphere),” said Foote, who was linemates with former Comets forward Kole Lind at the junior level. “In the playoffs, it is a lot more physical. After the whistle there’s a lot more fights or scrums. That’s normal. It is fun at the same time. It is fast-paced and guys get in your face quick. But, it is a lot of fun.”

Foote was among the prospects to contribute to giving Utica a 1-0 lead in the best-of-five series against the Amerks. Game 2 is at 7 p.m. Saturday in Utica, followed by Game 3 at 5:05 p.m. Sunday in Rochester.

“They’re high-character individuals. They play the game hard and the right way for the most part,” Comets coach Kevin Dineen said. “There’s some hiccups in there, but at the end of it I think they realize it is a long, hard season. Then, you get into the playoffs and it is a whole new animal.”

Foote was among three players with multi-point efforts, totaling two assists on the Comets’ goals 59 seconds apart in the second period to help the team pull out of a two-goal deficit.

It comes after Foote got a look with New Jersey at the end of the regular season and didn’t seem out of place.

“He had a little confidence going coming back from Jersey,” Dineen said. “It was a very strong showing (Tuesday) by Nolan. We expect that moving forward.”

“It is just being a real complete 200-foot player,” said Foote, whose father, Adam, won two Stanley Cups with Colorado. “I am becoming a power forward and learning how to play that role.”

There were a few interesting developments at the team’s practice Friday at the Whitesboro Community Rink.

Standout defenseman Reilly Walsh didn’t practice, though he was later spotted in street clothes. He didn’t appear have any overt injury.

Dineen said there was “no update” regarding the 23-year-old Walsh. It is playoff time and often most updates on a player’s status are vague.

Walsh’s absence is notable, though. One reason is that he played in all but two of the team’s 72 games during the season, missing one while on recall late in the season and another as a healthy scratch.

Another reason: The Comets need someone to quarterback their top power-play unit.

Considered a high-end prospect after the Devils selected him 20th overall in the 2020 NHL draft, the 20-year-old Russian played the last three seasons in the KHL and was assigned to Utica on Monday and was on the ice for warm-ups Tuesday, but didn’t play in Game 1.

On Friday, Mukhamadullin filled the power-play quarterback role as the lone defenseman on the unit. He seems to skate well and has strong passing ability. And, he appears to have a solid shot in his arsenal.

“He’s as advertised. He’s a guy that can make plays and do things under pressure,” said Dineen, who noted there isn’t much panic in his game. “There’s no reason not to give him an opportunity.”

Dineen said some changes to the lineup could happen for Game 2, but didn’t elaborate Friday on who is in or out.

Versatile forward Frederik Gauthier (out since April 1) skated with the team in a jersey that appeared to signal he would be a scratch in Game 2.

Still, it is one of the first times he’s participated with the full team, so it is a positive.

Joe Gambardella spent time with his family after his wife’s grandfather passed away earlier in the week. He could be an option again after scoring the go-ahead goal in Game 1.

Garrett Van Wyhe, who made his debut April 16, and then missed time with an injury also appeared to be full participant.

Forward Chase Stillman remains out. Dineen previously said he would not be an option for this series.