A construction crew was busily working to build scores of new single family homes in the former Woodhaven area in Rome on Thursday, June 2, 2022. A forum discussed the need for new and additional housing amid ongoing revitalization efforts in the region.
(Sentinel photo by John Clifford) 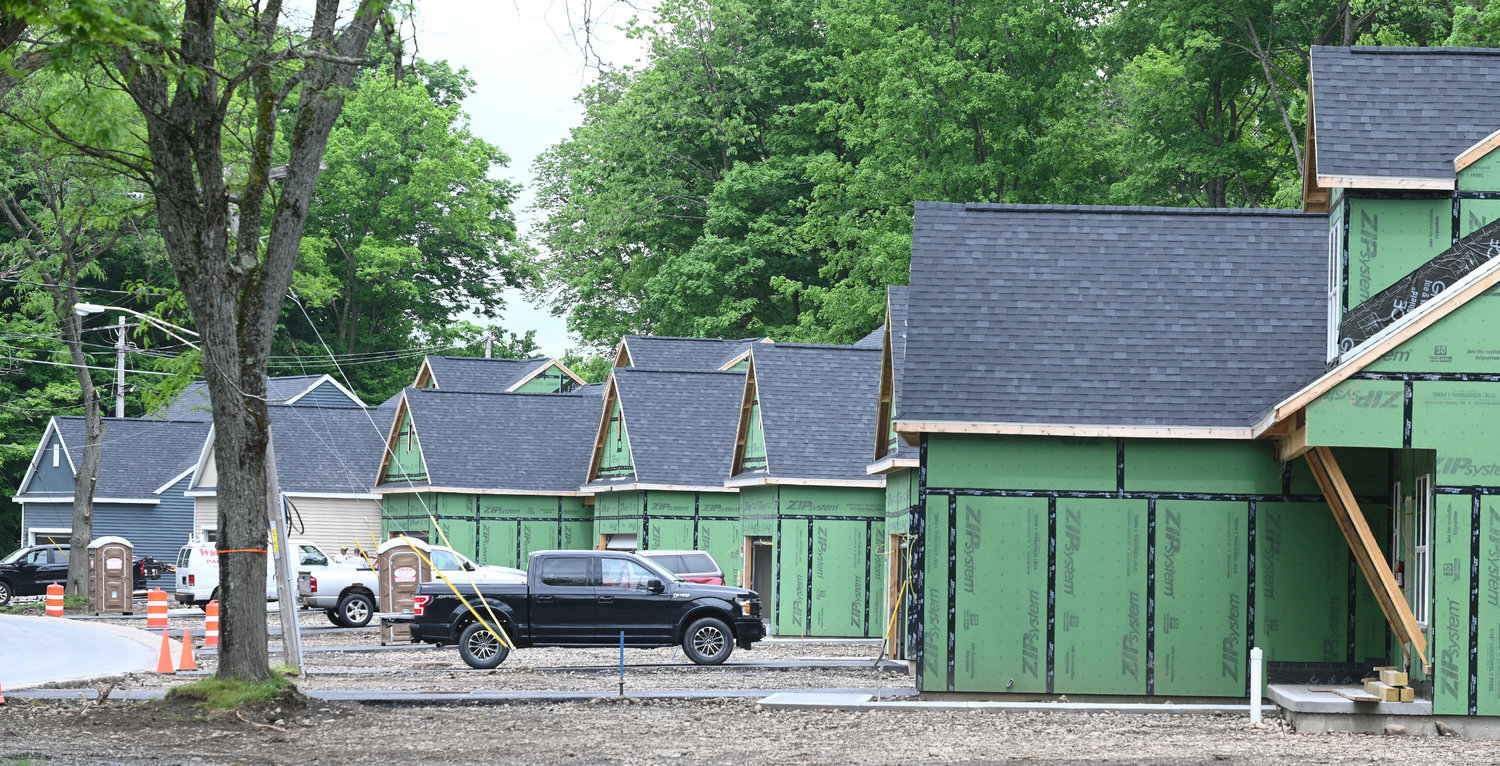 In a Thursday housing forum hosted by the Chamber Alliance of the Mohawk Valley at Harts Hill Inn in Whitesboro, housing challenges and data collection efforts highlighted the discussion as well as immediate and long-term housing needs as it impacts community issues such as workforce recruitment.

During the past year, a task force working through the Genesis Center for Excellence has gathered community data and conducted meetings with area stakeholders to examine the role and impact of data analytics in various industries as well as identify potential projects focused on workforce recruitment and retention efforts in the Mohawk Valley and having enough available, suitable housing options at different price points to fit all needs.

An emerging theme from the work has been the lack of housing and its direct impact on the difficulty to recruit and retain workers, affirmed panelists speaking to the impact of housing on the local economy that included: were Linda Aloisio, president of the Home Builders & Remodelers of the Mohawk Valley; Richard Dowe, executive director of Stone Ridge Residences in Herkimer County; James Genovese, commissioner of the Oneida County Planning and OC Vision 20/20 and Timothy Crilly, of Park Grove Realty and the Tech Barn at Marcy Nanocenter.

Collectively, the panelists’ remarks painted a chicken or the egg situation when it comes to both recruiting and retaining employees to the area and looking at available housing.

Dowe noted that while there is housing project growth in Herkimer County, there are challenges such as the lack of available public transit options that some might need to get to a job in surrounding communities. So, developers looking at the marketability of a neighborhood for a project might be deterred from pursuing some communities.

The housing situation is not black and white data shows, according to the forum panelists.

As an aside from their discussion, one can start getting the picture by looking at Census.gov population estimates for Herkimer, Lewis, Madison and Oneida counties — then comparing them with available housing unit stock.

The United States Census bureau provides yearly data estimates outside of the official ten-year Census. In their methodology, they start with data collected in the ten-year study and consider births, deaths and migrations, for their population estimates. Housing units are estimated by using the ten-year Census count as a base and reviewing available data regarding new construction projects (often searching for building permit information), mobile home constructions and subtracting known housing unit losses in a particular area.

According to yearly estimates conducted by the United states Census, datasets published this spring show that in 2021, Herkimer County had about 32,408 housing units and a population of 59,937.

After looking at those numbers, you might ask yourself, “What is the problem?”

Touching on the math behind assessing available housing stock, Genovese said due to a variety of reasons there is currently a 7% vacancy rate in rental units at all price points and 2% of residential homes are currently empty.

“It’s a low rate,” he said, which is contributing to the current low housing stock sentiment.

This adds to the struggle of recruiting employees because they can’t find a place to live.

Dowe added that even in Herkimer County, housing stock is low as “people are waiting for affordable housing and comfortable homes.”

As housing and employment data sets continue to be collected and co-examined by the task force and others, remedies include searching for state and federal grant moneys that can aid in renovation efforts of existing buildings, working to enhance public infrastructure and utilities to make more building sites attractive to developers and finding ways to lower property taxes, said Genovese and the panelists.

Switching to a discussion of ongoing housing work, Genovese noted that since 2010, there have been 1,694 housing units constructed in Oneida County.

Among ongoing housing projects are Rome’s AirCity Lofts, and the Woodhaven residential project — which will total nearly 250 single-family residential homes by the end of construction.

Aloisio added that there needs to be more grant programs available to encourage the renovation and improvement of existing housing units.

At the conclusion of the forum, all agreed that looking at housing and employment issues and creating solutions to fix them is a “team effort.”