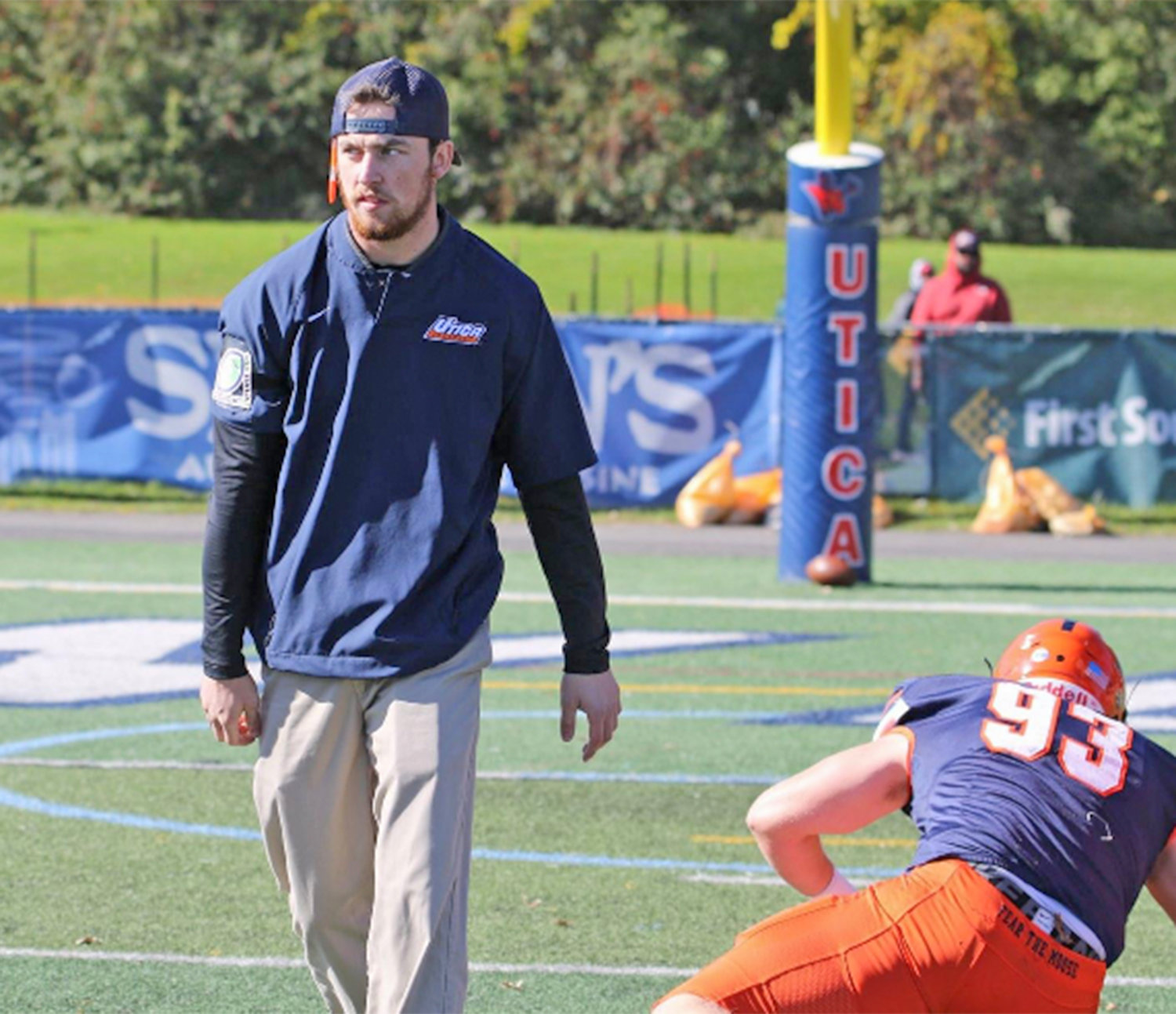 TAKING THE REINS AT ONEIDA — Matt McCoy walks the field at then-Utica College as a defensive coach before a game. McCoy, a Vernon-Verona-Sherrill graduate and former UC defensive back, has been chosen as the new varsity head football coach at Oneida.
(Photo submitted)
Posted Friday, April 22, 2022 8:00 am
Steve Jones
Sports writer
email / twitter

ONEIDA — Oneida has hired former Utica College player and coach Matt McCoy as its new varsity football head coach. McCoy is quite familiar with the team, having played for rival Vernon-Verona-Sherrill.

McCoy is 25, a 2014 graduate of VVS who played for five years at UC as a defensive back, two of them as a captain.

He had an injury for which he was granted an extra year of eligibility. He joined the Pioneers’ coaching staff as a graduate assistant. He first coached outside linebackers and defensive ends and later coached the secondary. He also served as junior varsity defensive coordinator. Later, with the varsity team he was in the press box on game days working with the defensive coordinator. He also traveled the country for the program in recruiting capacities and learning at clinics.

“Had a really good experience coaching and really wanted to get back to high school football,” said McCoy. For the past two seasons he’s been a volunteer coach on the VVS staff. He currently works as a health teacher in the VVS district.

He said he saw the Oneida opening and went for it. He was interested in the job because of “the people, really, and how much the community cares about football in Oneida. Being from VVS I played against Oneida and I know they cared. They built a culture of smash mouth football.” He continued: “I saw that the head coaching job was open at Oneida. It never hurts to interview. I was interested and ready to take the step and become a head coach.”

McCoy said, “It felt right and felt like a good fit.” He even lives close to the job, in Oneida within a football’s toss of the field.

The Oneida Board of Education approved McCoy’s hiring at its meeting this week. Coach Jason Fuller resigned for personal reasons, according to the district.

What does McCoy think of an eventual game against his nearby alma mater? It won’t be this coming season. “When that happens sometime down the road, I’m really excited. It’ll be fun. The rivalry is still alive,” McCoy said. “I have a really good relationship with (VVS head coach Gary) Oliver.”

Oneida was 3-5 last season. The team’s schedule this fall starts with a scrimmage Sept. 3 then the team opens at home against the Institute of Technology Central at 7 p.m. on Friday, Sept. 9. The team travels to Homer the next Friday then hosts Camden Sept. 23. They travel to South Jefferson then Central Valley Academy the following two weeks then finish the regular season with homes games against Cortland on Oct. 14 and Indian River on Oct. 21.

McCoy has his coaching style but it’s still too early to say what the team will look like under his leadership. “We’re just getting to start some things. I plan on sitting down with the coaching staff this weekend,” he said. He has his own ideas but the coaches haven’t talked about schemes yet, he noted. He’ll introduce himself to the players next week then start planning off-season programs. “It’s important to understand who you have as players so you can put them in the best positions to be successful.”

Last year’s team, he noted, graduated a lot of seniors “but there’s a lot of young guys on the team. It’s a good core group of juniors I’m looking forward to working with.”

“I’d say I’ve always been a defensive guy,” which helps him understand what can work on offense. “I enjoy drawing up plays.” He added, “I’m not going to be the kind of guy who comes in and tries to do it all.” He said he plans to delegate responsibilites and let coaches coach.

McCoy knows he’s going to be in a tough Tri-Valley League. “I was really hoping to play VVS this year because everyone looks forward to that rivalry.”

But VVS dropping down to Class C affects how often they’ll play Class B Oneida.

New Hartford head coach Jim Kramer recruited McCoy to play at Utica College, he noted, but because the Spartans bumped up to Class A that’s another team they won’t play every season. “The Class B teams, on our side especially, are all very good. It’s going to be a tough schedule. There’s a lot of good teams that like to beat up on each other.”