St. John the Baptist Church, 200 E. Dominick St., will soon be home to a replica of The Pietà, a sculpture by Michelangelo that sits in The Basilica of St. Peter in Vatican City, Rome, Italy. A … 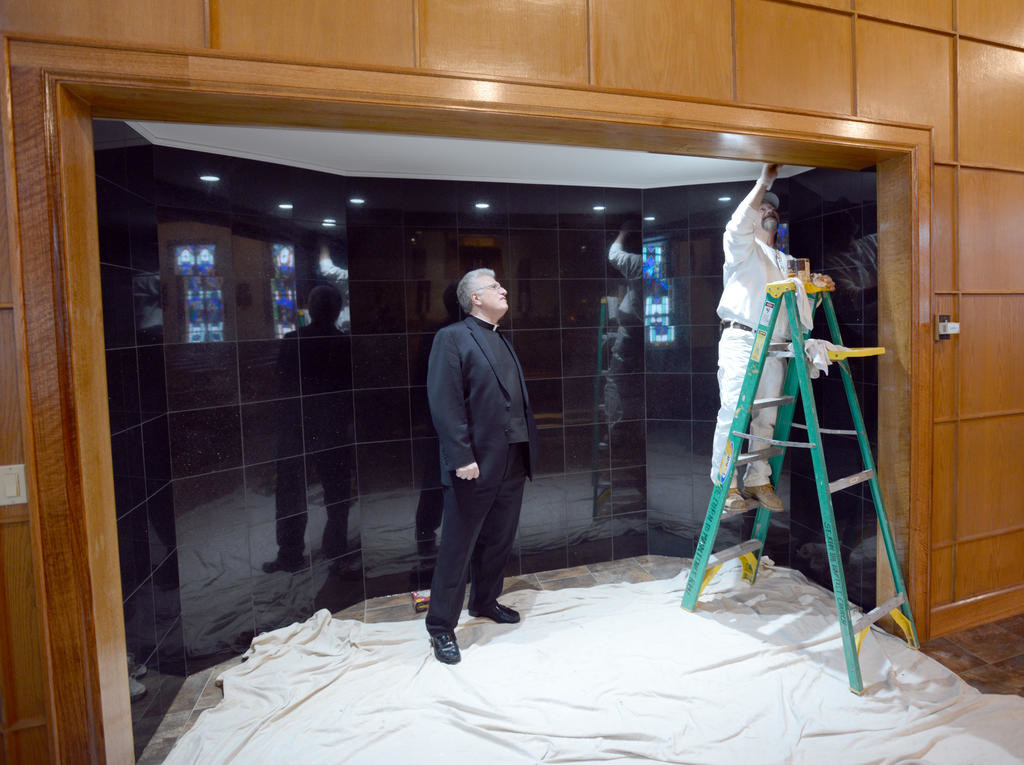 FIT FOR A MASTERPIECE — The Rev. Paul F. Angelicchio watches Mark Nellenbach, owner of M&M Painting and Wallpapering, put finishing touches on a display area at St. John the Baptist Church on East Dominick Street. The recessed area will host a replica of The Pietà, a sculpture by Michelangelo that sits in The Basilica of St. Peter in Vatican City, Rome, Italy. A former Roman is financing the sculpture, one of 11 he is funding and one of 112 that will be made. It will be unveiled April 26. Story, photo, page 2. (Sentinel photo by John Clifford) 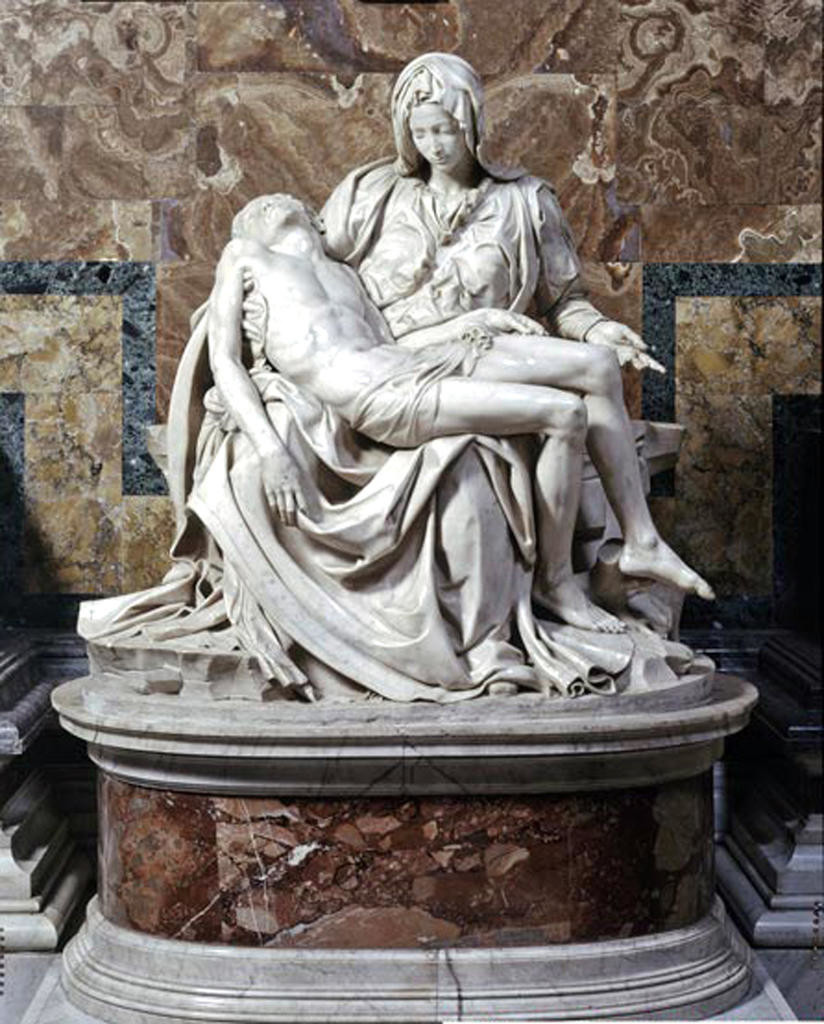 THE ORIGINAL — The Pietà, a sculpture by Michelangelo, in The Basilica of St. Peter in Vatican City, Rome, Italy. It depicts the body of Jesus on the lap of his mother Mary after the Crucifixion. Crafted in 1498 and 1499, the original now sits behind bullet-proof glass. A replica will be placed at St. John the Baptist Church in Rome, New York, one of 112 made from the original’s mold. Vatican Information Service
Previous Next
Posted Friday, March 27, 2015 4:00 pm
Steve Jones

St. John the Baptist Church, 200 E. Dominick St., will soon be home to a replica of The Pietà, a sculpture by Michelangelo that sits in The Basilica of St. Peter in Vatican City, Rome, Italy.

A group called Arte Divine is making 112 of these from a mold of the original. Richard G. Stewart Jr., a Rome, New York, native now living in California, is funding 11 of them, including the one he wanted for his home town.

The Rev. Paul F. Angelicchio said he received a phone call about the project and was surprised at the opportunity.

“When he explained the significance of The Pietà,” he said of his conversation with Stewart, he was floored. The original sits behind bullet-proof glass in Italy, crafted in 1498 and1499. It depicts the body of Jesus on the lap of his mother Mary after the Crucifixion.

Stewart, age 69, was born and raised in Rome.

“I spent a lot of time there in the church,” he said of St. John’s. “I lived on South James Street, so I walked there.”

When the statue is blessed and dedicated in a ceremony he plans to attend on April 26, it will mark the month 60 years ago when he first served as an altar boy in the church.

Stewart is chief executive officer of Help Worldwide, a company that owns nine “loyalty” companies, those who offer members discounts and savings based membership.

A portion of the money each consumer spends is given back to charities, he explained.

He visited the Vatican in connection with this program, and then became involved in this new venture. Stewart bought 11 of the replicas himself, to be put in various locations.

“Rome is it,” Stewart said of his decision to put one statue in his home town.

“From Rome to Rome. I couldn’t think of a better thing. I was born there, I’m Italian, both sides of the family. It’s the place I found God.”

He continued: “My life has been nothing but miracle after miracle.”

Stewart, who still has family in Rome and Utica, said: “Michelangelo would be absolutely elated” to know there will be a statue in Rome. Not everyone can get to the Vatican, and that one is behind glass, Stewart noted.

He and his wife Esther put one statue at the parish of La Purisima Catholic Church in Socorro, Texas, the city where she grew up and where they were married. The location has quadrupled its income since then based on a swell of tourism, Stewart noted.

“I’m hoping that people when they see it that it touches their hearts,” Stewart said. “I’ve seen people get down on their knees and pray and cry when they see it.” He said he hopes it encourages “forgiveness and love.”

“The people have been very excited,” said Angelicchio. The church has made a special space behind the last row of pews where the statue will be housed.

Angelicchio has been to the Vatican five times, and has seen the original Pietà almost every time, he said.

“There’s a sense of prayerfulness when you gaze upon it,” Angelicchio said. He added that he hopes those who see the statue in St. John’s will find something special in it as well.