Nolan Foote found some space between defenders and went to the net. Near the top of the crease, Utica Comets winger Foote got a pass from linemate Brian Pinho behind the net and quickly … 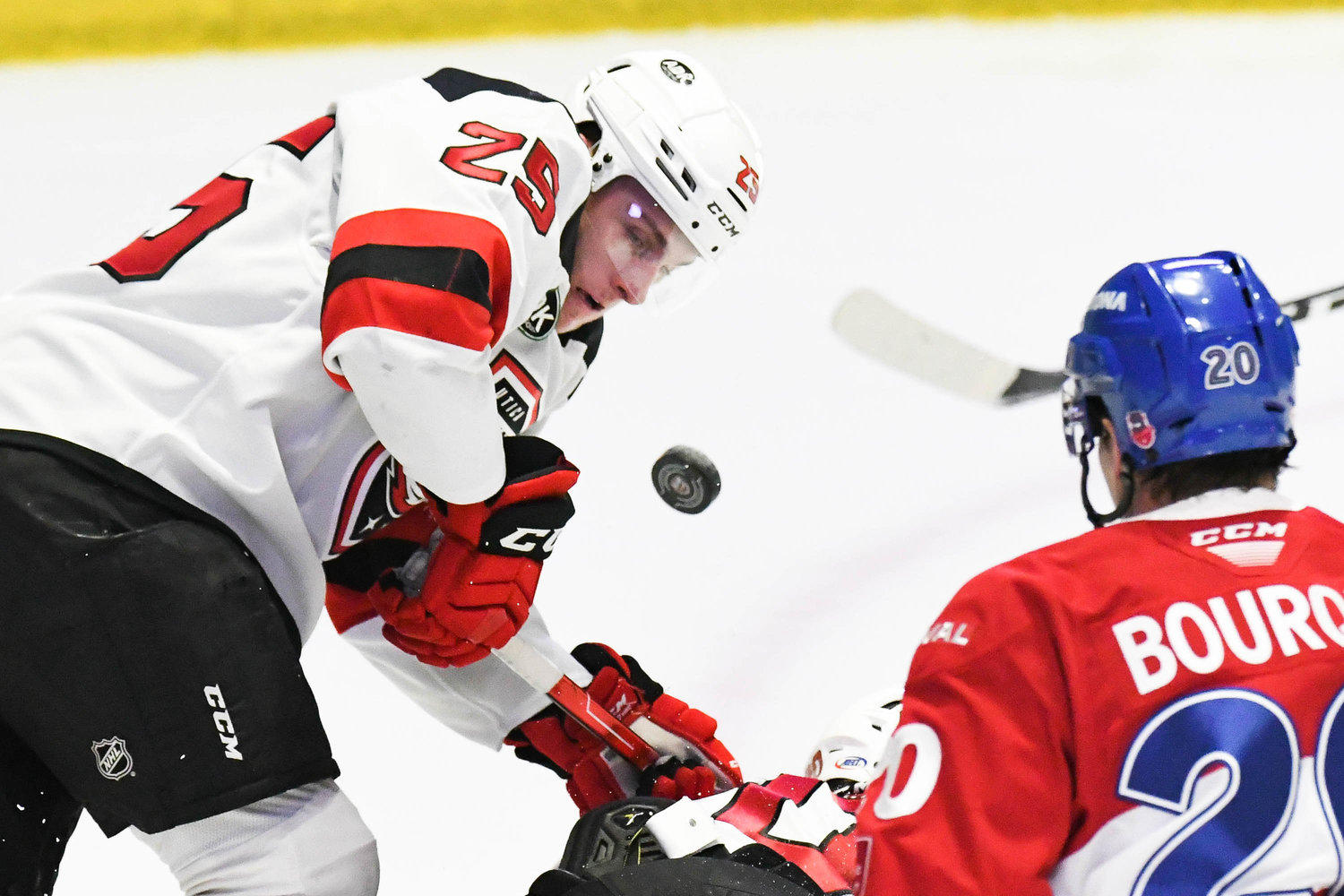 Utica Comets forward Nolan Foote, left, attempts to screen the puck in front of the net during a game against Laval last season at the Adirondack Bank Center. Foote has a goal in three consecutive games. Utica is set to play visiting Laval on Friday and at Syracuse on Saturday.
(Sentinel file photo by Alex Cooper) 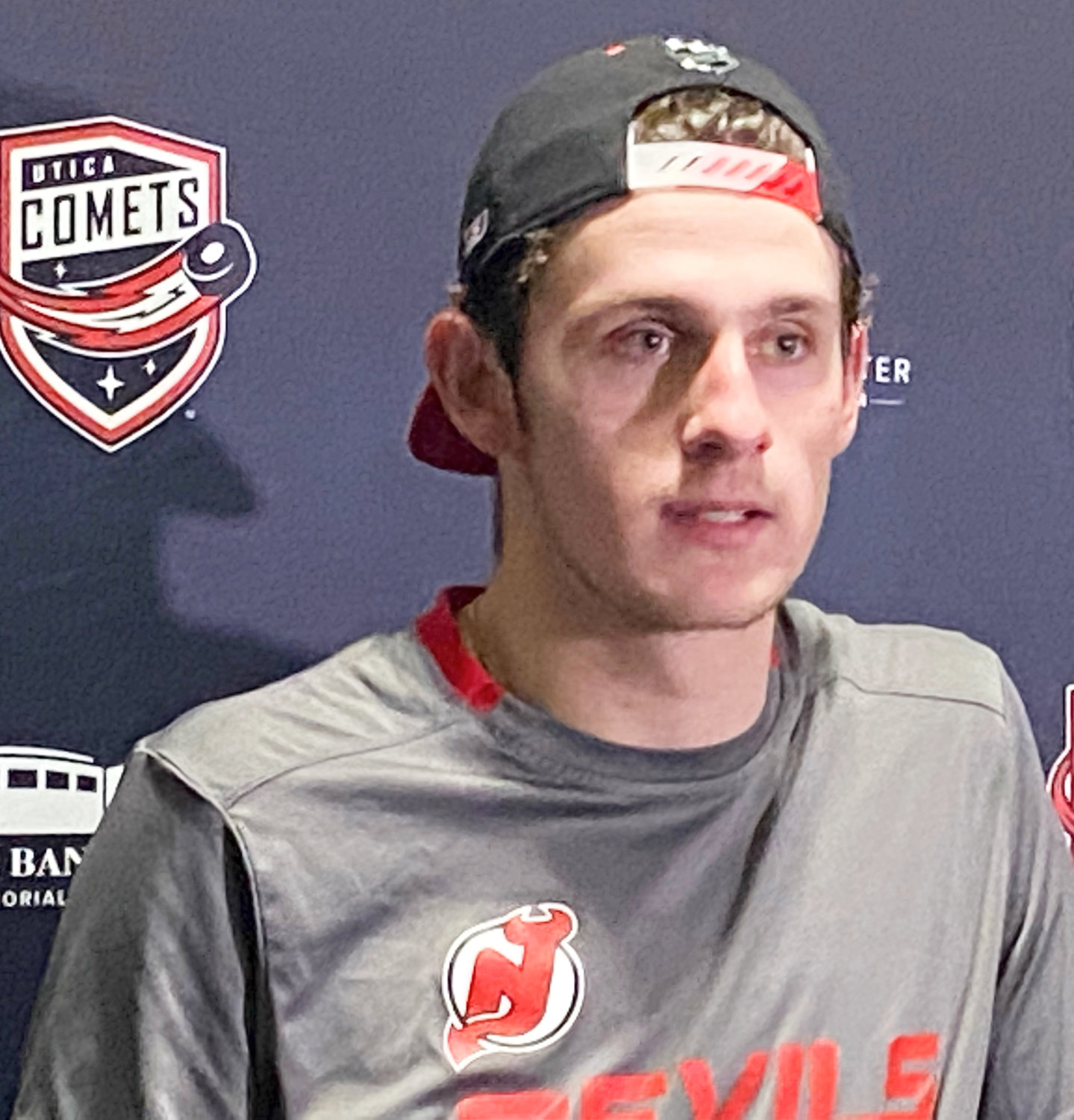 UTICA — Nolan Foote found some space between defenders and went to the net.

Near the top of the crease, Utica Comets winger Foote got a pass from linemate Brian Pinho behind the net and quickly tapped the puck in past Rochester goalie Michael Houser.

The goal, about three minutes into the third period Saturday, proved to be the game-winner for the Comets in a tight game against their North Division rival.

“I just wanted to let the play develop with (Pinho) behind the net,” Foote said following Tuesday’s practice. “He was able to handle the puck and find me in front. I think just getting to the front-net – not just for me, but for everyone – we’ll start to score more goals there.”

It was the third consecutive game that the 6-foot-3, 201-pound New Jersey Devils prospect scored in with the Comets, who are looking for more consistent offense early in the season. The team is averaging 2.63 goals through eight games, fourth-fewest among the 32 American Hockey League teams.

The Comets (3-4-0-1, 7 points) have games North Division opponents this weekend. Utica plays visiting Laval at 7 p.m. Friday before a game at rival Syracuse at 7 p.m Saturday.

For Foote, who is in his third pro season and has played 101 regular-season games between the AHL and the NHL, he’s developed some chemistry with Brian Pinho in the team’s eight full games. Pinho signed with New Jersey this past offseason and the pair didn’t know each other other than playing against each other the last two seasons. The pair have had different linemates in the games

“It has been good to find that chemistry (with Pinho),” said Foote, who has six points in nine games. “We’ve built a friendship outside of hockey. It is nice to get away from the rink and hang out with him and go get dinners and stuff.”

Comets coach Kevin Dineen noted the maturity of Foote, who turns 22 at the end of November. He is the son of longtime NHL defenseman Adam Foote and the brother of Tampa Bay defenseman Cal Foote.

“Nolan is a young kid who is very goal-oriented. His goal is to play in the NHL like every one of these players. I think he’s matured to the point that he’s not worried about hopping a step and thinking that he’s going to get right there,” said Dineen, who played in more than 1,100 NHL games. “He does have a great shot. Although, I think he understands that a big body like him and his skillset that he’s not shy about going to hard places. You can talk about that all you want and review and prepare, but when it is actually showing up on the scoresheet I don’t know that there’s any better lesson and development tool.”

There could be a spot among the forwards with New Jersey, who are without Ondrej Palát for eight-to-10 weeks, the team announced Tuesday. The team will also be without goaltender Mackenzie Blackwood (sprained MCL) for three to six weeks, the team said.

Placing Blackwood on injured reserve – something New Jersey hadn’t announced as of 6 p.m. Tuesday – would open a spot on the 23-man roster. There are options, including forward Andreas Johnsson, who didn’t practice Tuesday with Utica due to illness. Foote has put himself in the conversation for a call-up at some point.

“We have been talking about player development for a while, now we owe it to these kids to see what we have,” Devils General Manager Tom Fitzgerald told ESPN on Tuesday.

Foote said he knows it takes hard work to get to the NHL.

“I think for me just using my size down low and holding pucks longer and taking advantage of trying to create plays with my size and space for myself and linemates,” said Foote, noting that his skating has improved. “I think I’m doing better. It is getting there.”

Defenseman Nikita Okhotiuk (upper body) participated in a normal jersey after recently skating on his own after being out following his injury in the first game of the season on Oct. 15.

The 21-year-old Okhotiuk appeared to be partnered with Robbie Russo during Tuesday’s practice, a possible indication he’s close to a return.

Dineen said team officials are “encouraged by where (Okhotiuk) is at.”

“I think any time he’s in the lineup, the other team takes note,” Dineen said.

Forward Tyce Thompson had a precautionary absence Tuesday, Dineen said. Thompson had soreness stemming from a previous lower-body injury that forced him to miss time at training camp.

“We miss that enthusiasm and passion he brings,” Dineen said.