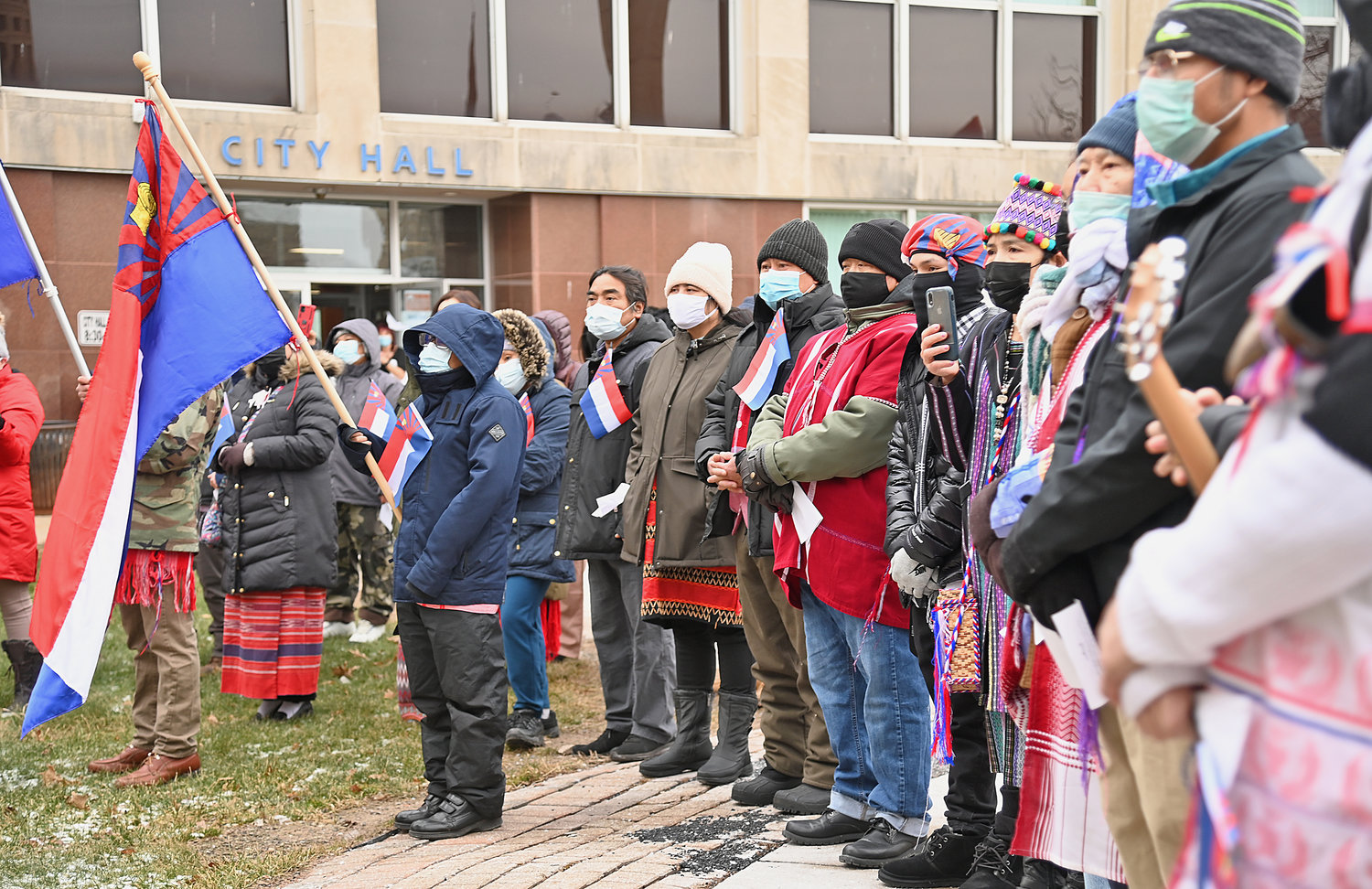 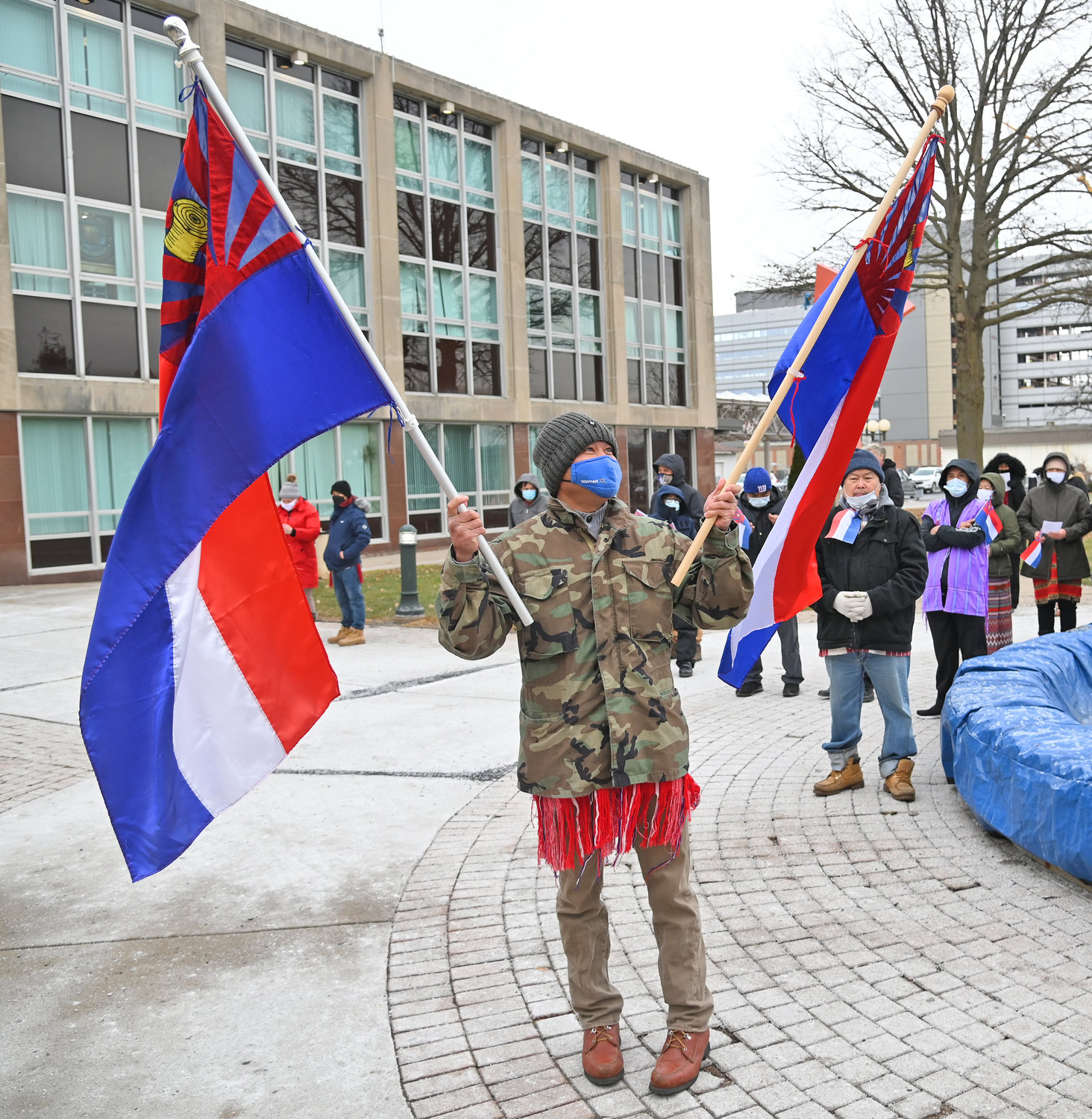 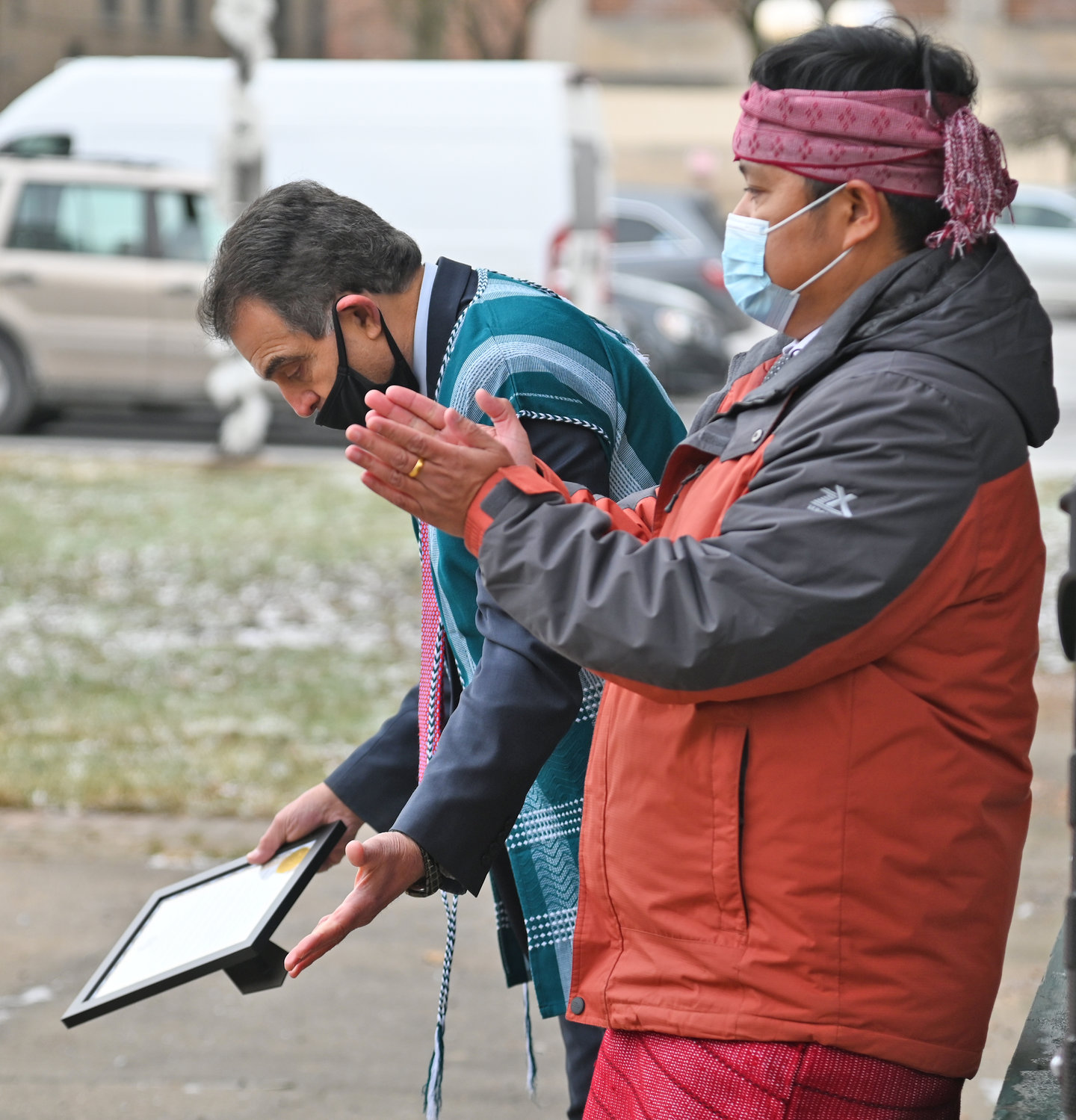 HONORING NEIGHBORS — Utica Mayor Robert M. Palmieri bows to members of the assembled Karen community after the reading of a proclaimation on Wednesday.
(Sentinel photo by John Clifford) 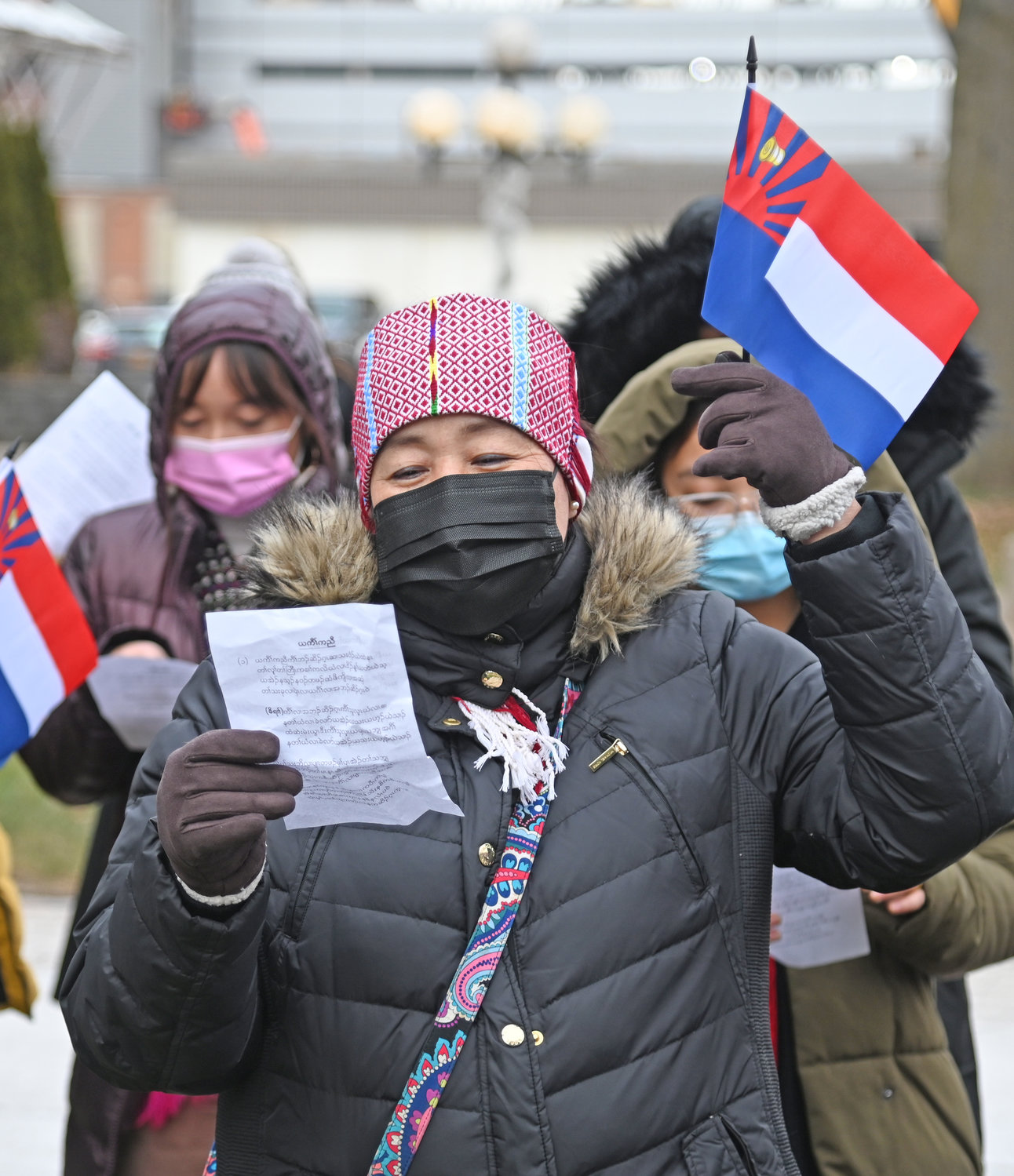 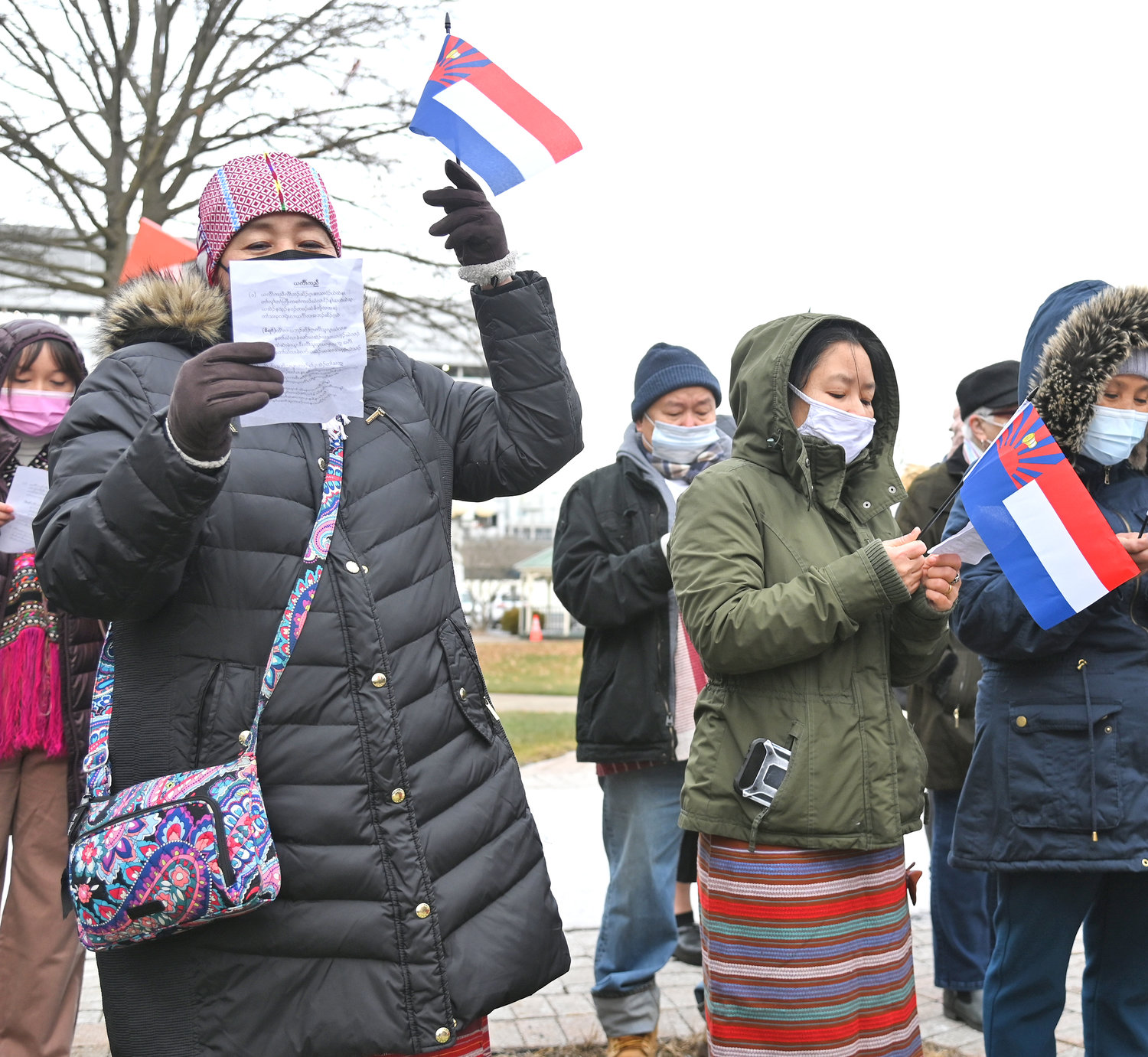 Sayway Htoo raises her flag while singing during the Karen Community Flag raising ceremony at Utica City Hall. Next to her, Lah Hser is also singing.
(Sentinel photo by John Clifford) 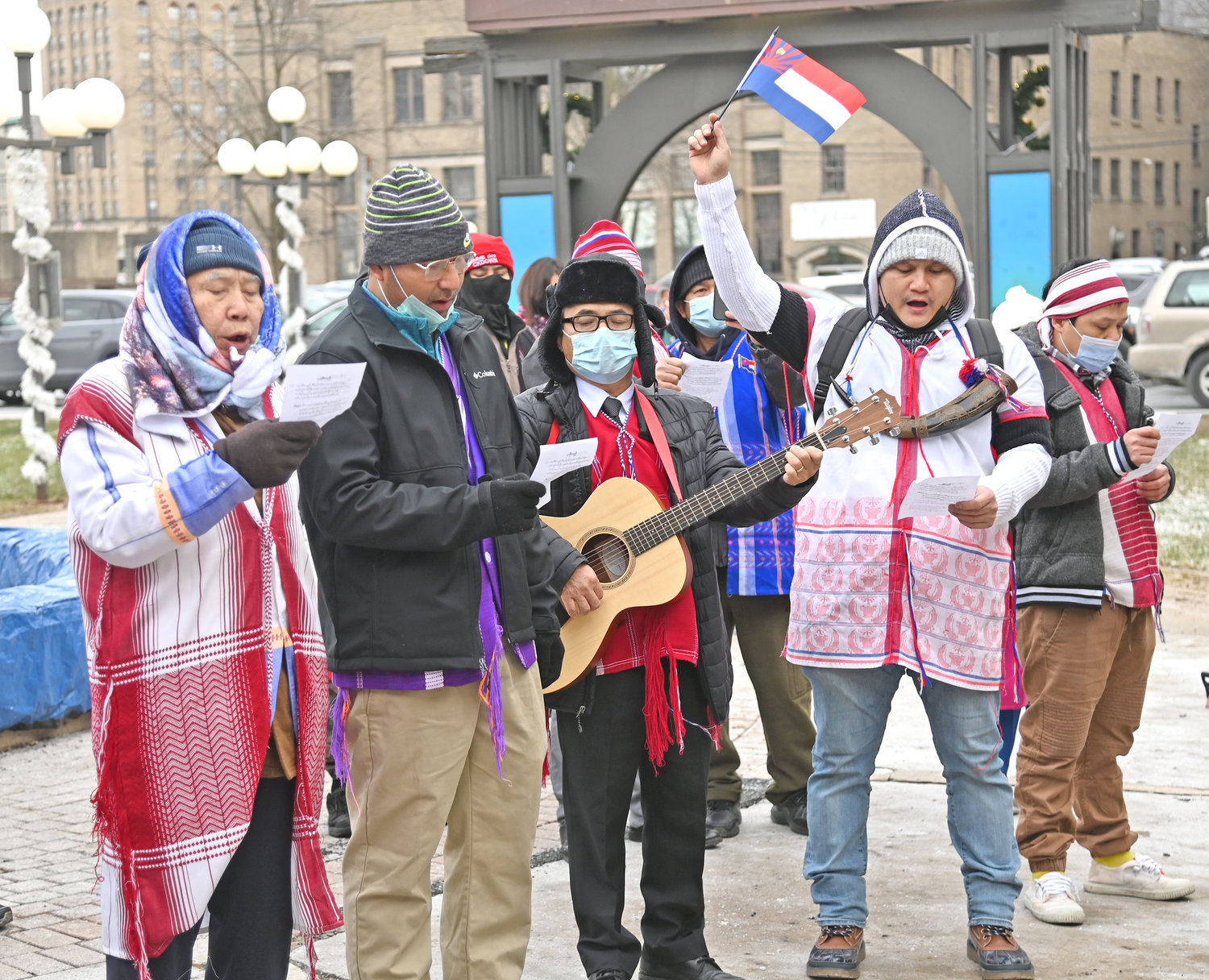 UTICA — In a Wednesday ceremony, members of Utica’s Karen population, an ethnic group from Myanmar (Burma), were able to see their cultural flag raised on a pole in front of Utica City Hall near another pole holding the American flag.

This was the first time it had ever been raised, and marked the occasion of January being declared Karen Heritage Month in the City of Utica by Mayor Robert Palmieri.

The Karen people started coming to the United States over two decades ago as refugees with the first family of the ethnic group settling in Utica in October of 1999.

And, is close knit.

“This is very significant,” Doh said looking at the flag in Hanna Park that hadn’t yet been raised. “I hope this brings us closer to the community.”

As Doh spoke, he looked at a crowd of about 50 people assembled in the park for the ceremony, many who donned traditional clothing - “chay plo gaw” a type of woven cotton shirt for the men and “nee,” a long, straight skirt-type of garment and “chay mo thoo,” or a woven cotton shirt for the women - and reflected on how the ethnic group has built a new life in Utica after being uprooted by persecution and political instability.

“We came a long way. Decades under oppression in Burma,” Doh said to the gathering once the ceremony began, “Let this moment symbolize a stronger tie with Utica.”

Others spoke as well.

“You have made our city stronger … you have made Utica, New York, your home, and it is your home,” Palmieri - who also was wearing a chay plo gaw - told those gathered.

Shelly Callahan, the executive director of The Center in Utica, said that of the Karen population who have settled in the area, a little over 4,000 resettled  with assistance from The Center, and have only added to the “warmth of the community.”

“The measure of your hearts and community spirit is unmatched,” Callahan said.