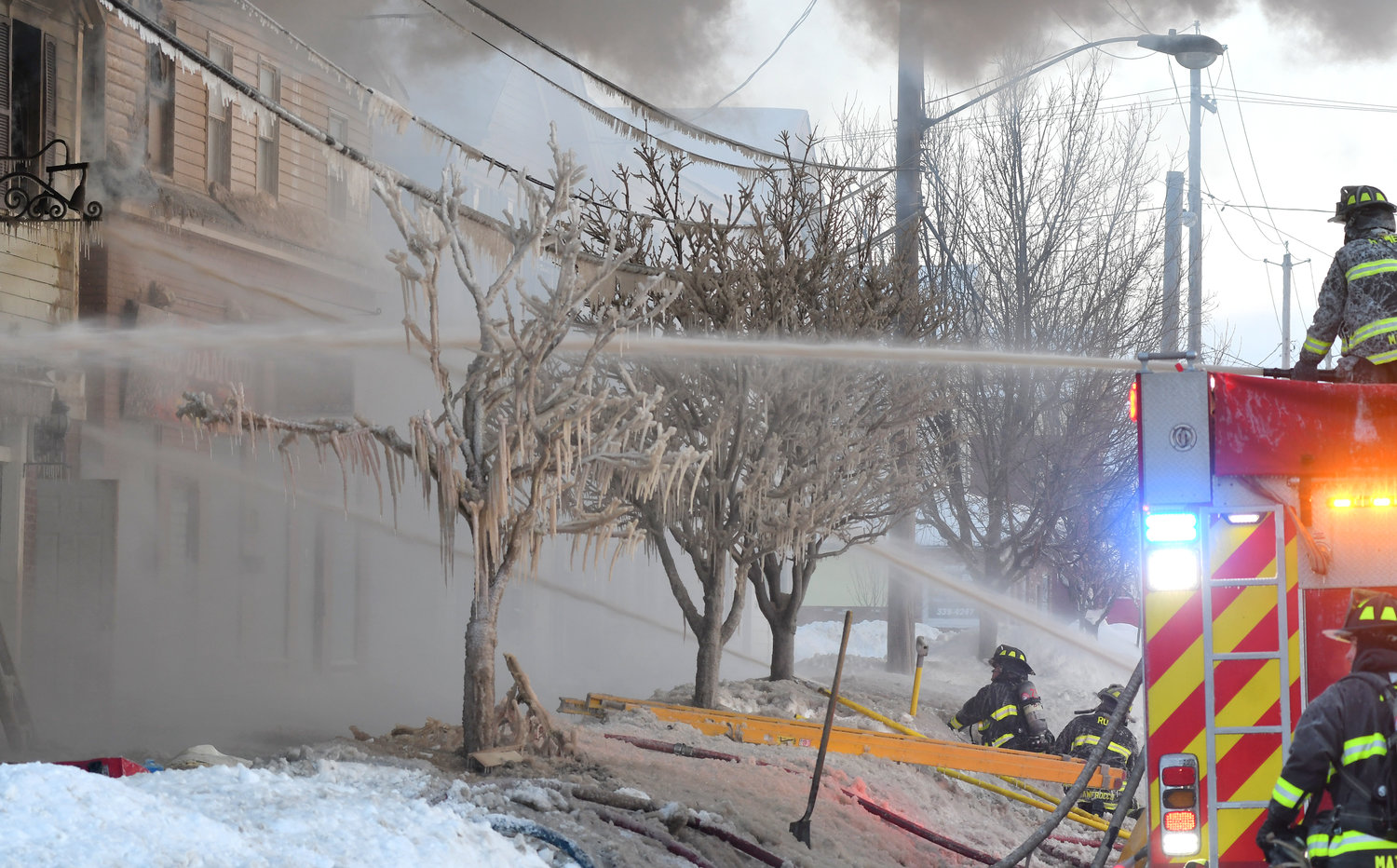 One upstairs tenant was rescued by city firefighters ahead of a massive blaze that destroyed at least three buildings at the corner of North James and Huntington streets this morning, including a longtime pet store.

All of the animals inside Peterson’s Exotic Pets are believed to have been killed, according to fire officials. “It was too far advanced in the pet store” to attempt any sort of animal rescue, said Fire Chief Ronald M. Brement at the scene this morning.

“Looks like it started on the first floor,” the chief noted. “Obviously, with that type of occupancy, you have a lot of heaters for the different exotic animals. I’m sure there was a lot of things in there that could probably” start the fire.

The exact cause remains under investigation. Peterson’s Exotic Pets at 305 N. James St. has been at the corner shop for several decades. Brement said the alarm was raised at about 4:14 a.m. when the second-floor tenant was woken up by smoke detectors in the building. The tenant couldn’t initially see smoke or flames in his apartment, but responding firefighters saw the smoke coming from the eaves of the building. Brement said the man was confined to a wheelchair when crews rushed into his apartment.

“They got him out in the wheelchair. He was the only occupant on the second floor,” Brement stated. City officials said the resident’s dog was also rescued.

The resident of the second upstairs apartment, James Peterson, is out of state, authorities said. He is one of the sons of the owners.

“We initiated a fire attack inside. The firemen on the second floor, the fire was coming right through the floor on them already when they got the guy out. So they knew they had fire on the first floor in the pet shop,” Brement stated.

“Originally they got in, but the fire was advancing so fast that we had to pull them out and make sure everybody was out of the structure.”

Thick clouds of smoke rose high above the city and could be seen for miles around throughout the crisp winter morning. An acrid smell also wafted for blocks around downtown. The clouds of smoke remained well into the morning.

Brement said they attempted to keep the fire from spreading to the vacant cafe next door at 307 N. James St., but the two buildings were very closely connected and the fire spread. The building used to house Spressos coffee shop, but now both the cafe downstairs and the apartments upstairs are vacant.
The chief said the wind played a factor in spreading the flames.
"The eaves were just so close the fire migrated," he stated. "It's tough when you get into tight buildings like this. It's what the old cities were like."
The chief said crews were able to keep the fire from spreading to the third building, the Legg's Diamond pawn shop, at 309 N. James St. But he said there was heavy smoke and water damage at the pawn shop.
According to city records, Peterson's Exotic Pets is owned by AW & Edna Peterson. It has an assessed property value of $79,800, and was opened in 1970.
The pet shop was initially owned by James Peterson, who passed away in 2008. Now the store is run by his wife, Patty Peterson, and one of their sons, Angelo.
"She said it's like losing a child of 48 years," said family friend Joann Beasock, this morning. Patty Peterson stayed with Beasock during the fire, while Angelo Peterson went to the scene of the fire.
"This is shocking. You don't expect this. It's her livelihood."
The Peterson family did not have insurance on the property, she stated.
All of the animals were lost, including fish, birds, hamsters, sugar gliders, snakes and more, Beasock stated. The fire also likely killed the pet store's African grey parrot, Jocko, who has been with the Peterson family for 19 years. Patty Peterson said she had raised Jocko since he was only two weeks old.
"He was the pet store's pet," Beasock said of Jocko.
A GoFundMe.com fundraiser has been set up for the Peterson family under the name "Savannah Santiago".
Legg's Diamond pawn shop owner, Brian Legg, said the extensive water damage to his building is severe.
"It's not looking good at all," Legg said this morning from the scene. "My building is shot. There's a lot of memories in that building."
Legg said the North James Street shop was his first, nearly 30 years ago. He said he was in the process of remodeling both the shop and the apartments upstairs. Legg said he was nearly ready to start renting out the apartments.
Legg said his property had insurance.
The flames took several hours before they were under control, with firefighters still actively fighting flames by 7:30 a.m. Chief Brement said the building was too unstable to send firefighters inside once the fire was knocked down, so they continued to douse hot spots from outside.
Snow was still falling and temperatures were close to zero degrees when fire crews arrived on the scene of the early morning fire, the chief said.
"Everybody did a good job. Not only did we keep the water moving, but all of the rigs have water in them," Brement stated.
"The cold really takes it's toll, it just wears you down that much faster. Your gear is getting wet, your air packs; everything you're dealing with is freezing up. It definitely complicates the operation. These are probably the worst condition that we would encounter."
Once the building is safe enough to enter, the investigation into the cause of the fire will begin.
According to Deputy Fire Chief Thomas M. Iacovissi, the building last went through a fire inspection in November. The initial inspection uncovered no working smoke detectors, but Iacovissi said Peterson remedied the problem immediately and the property passed a follow-up inspection.
Those smoke detectors were credited with waking the upstairs tenant this morning.
"These fire inspections that we do saved that guy's life," Iacovissi noted.