Fight for more federal prison workers in Adirondacks gets political

If you’re not specifically looking for the federal prison in Ray Brook, chances are you won’t even notice it’s there.

Fight for more federal prison workers in Adirondacks gets political 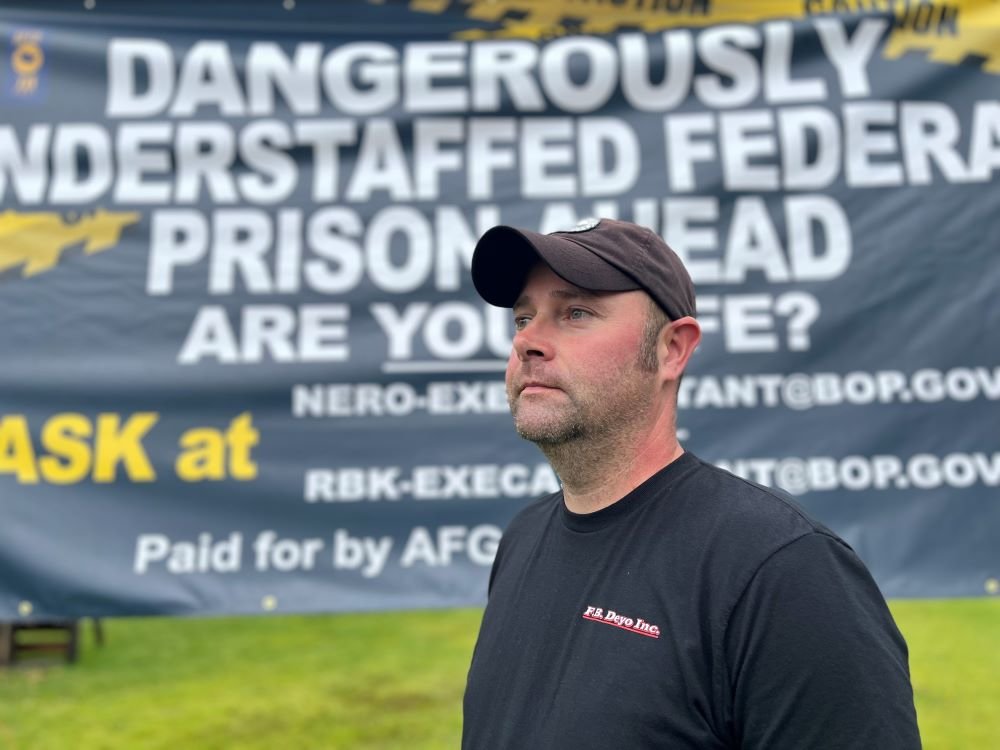 Darrell Pilon, a corrections officer at the federal prison in Ray Brook, is also president of the local union representing federal prison workers at Ray Brook. He says the facility is dangerously understaffed — and workers there are feeling the pressure.
(AP Photo/Emily Russell/North Country Public Radio) 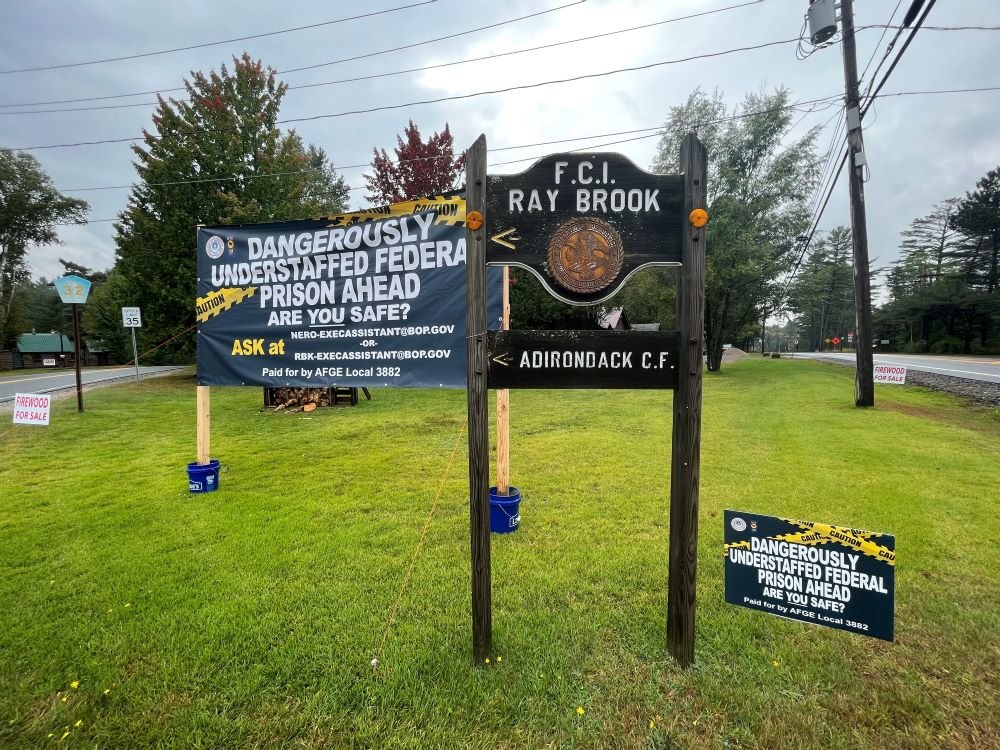 The new 6 x 12 foot sign was installed recently near the sign pointing towards the federal prison in Ray Brook and the Adirondack Correctional Facility, a state prison.
(AP Photos/Emily Russell/North Country Public Radio) 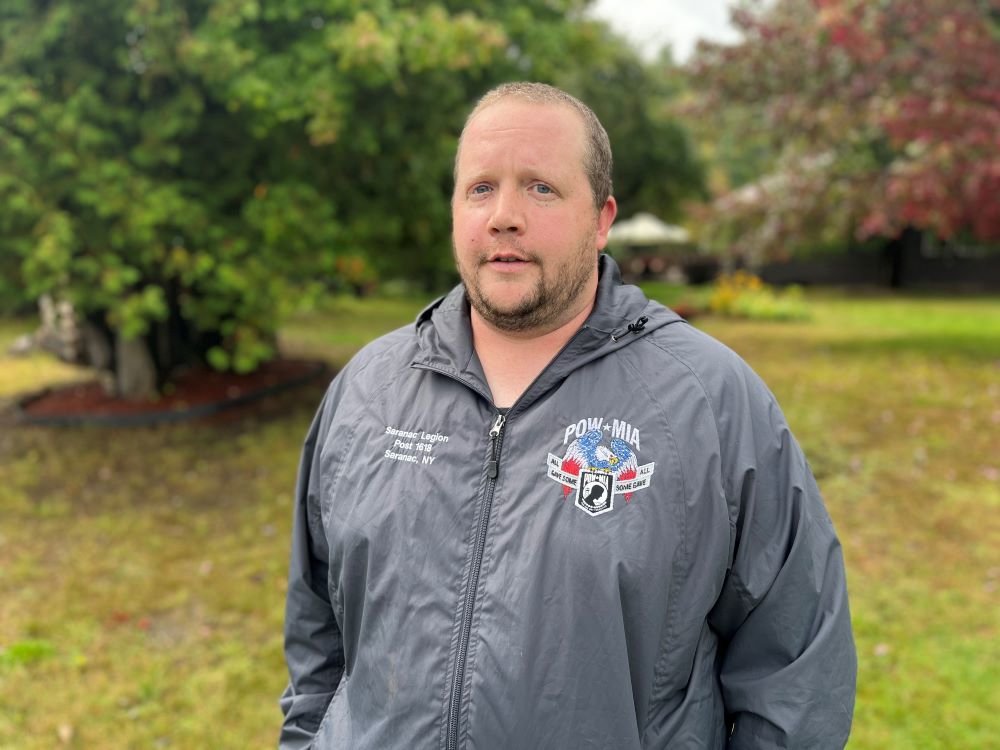 RAY BROOK — If you’re not specifically looking for the federal prison in Ray Brook, chances are you won’t even notice it’s there. It’s tucked back in the woods between Saranac Lake and Lake Placid. The sign for the facility is small and faded.

But earlier this week a much bigger, newer sign was installed right next to it. In all caps, it read ‘DANGEROUSLY UNDERSTAFFED FEDERAL PRISON AHEAD. ARE YOU SAFE?’

Darrell Pilon helped install the sign on Sunday. Pilon has been a corrections officer at FCI Ray Brook, the only federal prison in the North Country, for 11 years. Pilon is also president of the local prison workers union, which paid for the sign.

“In quite all honesty, are you safe? Yes,” said Pilon. “However, when it comes to safety, you got to keep in mind the staff that are working behind the prison that it is understaffed. It does create greater problems and issues when it comes to security.”

According to Pilon, FCI Ray Brook has about 70 corrections officers, which is about half of what they used to have. Jobs were cut back in 2016 when the inmate population started to decrease, eventually dropping down to around 500 inmates.

The following year, President Trump put a temporary hiring freeze on federal prisons. But now Ray Brook is up to more than 900 inmates. Pilon says staffing levels haven’t kept up, though, and workers are feeling the pressure.

“They’re stressed out, they’re tired,” said Pilon. “We have people that have 3 to 5 years on the job that are going back to their old employer. They’re leaving a job with a guaranteed retirement, health benefits.”

The Federal Bureau of Prisons declined an interview for this story, but said in a statement, “The Bureau of Prisons (BOP) is committed to ensuring appropriate staffing levels to maintain the safety and security of staff, inmates, and its institutions. The BOP continues to take concrete steps to increase staffing.”

According to its website, the BOP hired more than 4,000 federal prison workers nationwide in 2021. The website also says that the inmate-to-officer ratio in Ray Brook is about average, less than 8 inmates to one officer.

But Pilon doesn’t see it that way, since the BOP includes other staff like teachers, nurses, and electricians in their ratio, people like James Davis.

“We’re all having to work as officers in the housing units because it’s a prison, it’s got to run, and then our own jobs get pushed to the side,” said Davis.

Davis has been an electrician at Ray Brook for more than nine years. Not only is he working a position he wasn’t really hired for, but Davis said he’s also being required to work double shifts and a different schedule.

“I normally work through the week and I have weekends off, but now I have to work nights and weekends to help cover this. It’s affected things [like] missing out on kids’ sports and other things that I’ve always been able to be there for.”

It’s also affecting inmates. According to Davis, they’ve had to temporarily cancel visits and other programs like college classes for inmates because of the staffing shortage. Davis said he’s been working at the prison too long to quit, plus he enjoys his job.

“I like the place of work and the people I work with, everybody’s great,” said Davis. “We just need more people.”

That’s ultimately the goal of the big sign near the prison, which the town of North Elba ordered taken down on Thursday. The union wants 60 corrections officers hired back on and a 25% raise for the prison now until they’re fully staffed.

But they’ve been striking out so far. In a follow-up interview, Pilon said he’s tried to meet with North Country Congresswoman Elise Stefanik, even invited her to the prison in recent weeks, to no avail. Pilon said he’s disappointed and feels ignored by Stefanik.

“It’s all about photo ops with her. You can’t do that in a prison,” said Pilon. “Honestly, not to negate any issues people may face in their employment in her district, but we have serious issues that have a large impact.”

Stefanik wasn’t available for an interview for this story, but in a statement said, “I have brought the concerns of Ray Brook to the highest levels, including delivering Correctional Officers’ continuation of pay during the pandemic and working to ensure they had the resources they need throughout the pandemic.”

Pilon did meet with Stefanik’s Democratic challenger, Matt Castelli, earlier this week. Pilon himself is a registered Democrat but said he’s voted for Stefanik in the past.

After that visit, Stefanik’s senior campaign advisor, Alex DeGrasse, called the meeting a publicity stunt and said in a statement that Pilon “does not speak for the corrections officers,” and that officers are “absolutely angered and outraged that [Pilon] would support a Kathy Hochul endorsed candidate,” referring to Matt Castelli.

“Quite frankly, it’s laughable,” said Pilon, about the statement from Stefanik’s advisor. “I’m elected to speak for my members and also I have not had one member at all say anything negative. It’s been nothing but encouragement and praise and thanks. I honestly really don’t know what officers he’s talking to because they’re not from my facility.”

Politics aside, Pilon said he’ll keep trying to call attention to their staffing shortage at Ray Brook, but he won’t be happy until they’re back up at full capacity.