The Camden football team is dominated by seniors this season, with 21 of the 34 players in their final year of playing at the high school level. 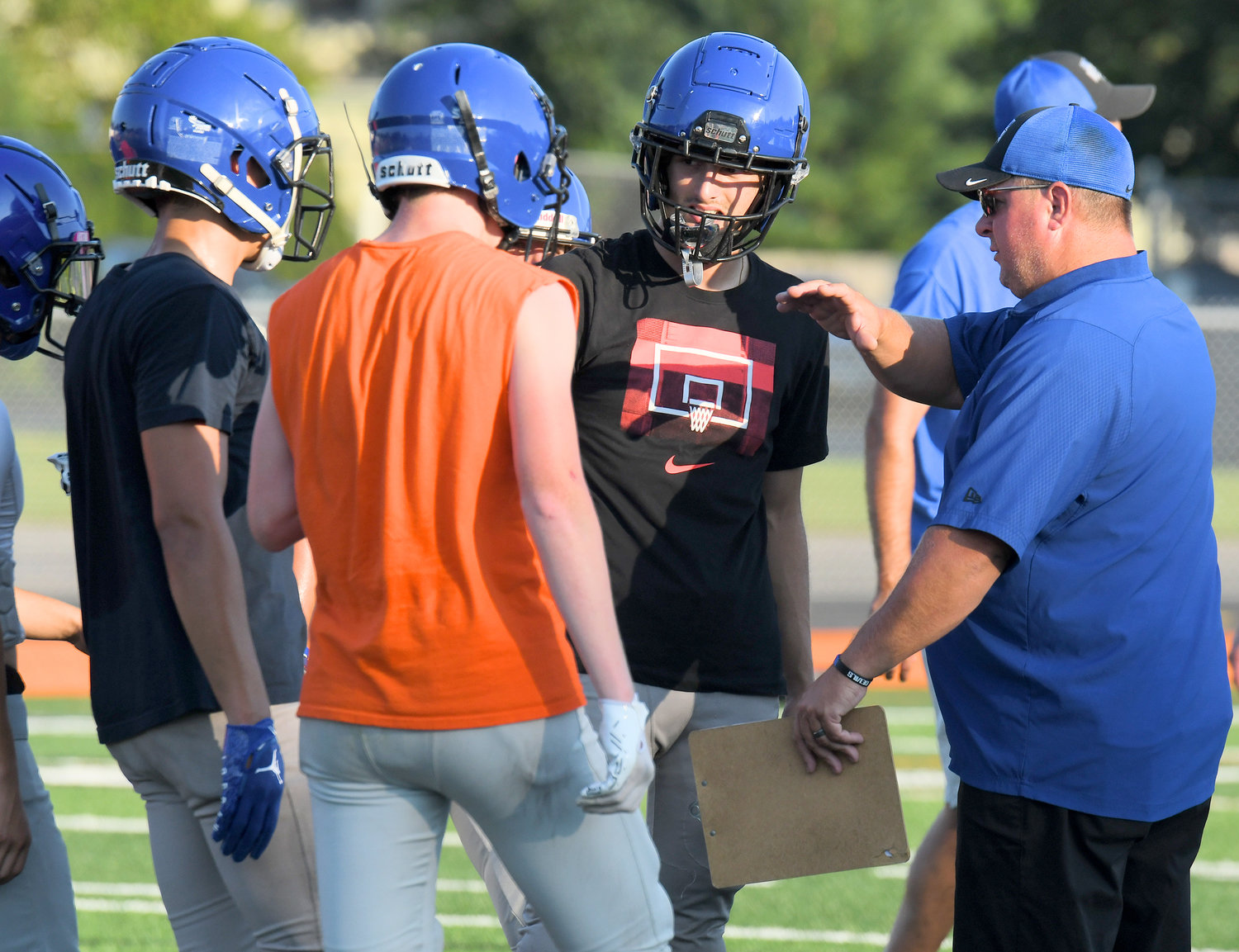 Camden head coach Jake Bates talks in the huddle with his first team offense during a seven-on-seven practice with Rome Free Academy. The Blue Devils are hopeful that a team with 21 seniors among its 34 players will have the experience to do even better than the 5-3 record compiled last fall.
(Sentinel photo by John Clifford) 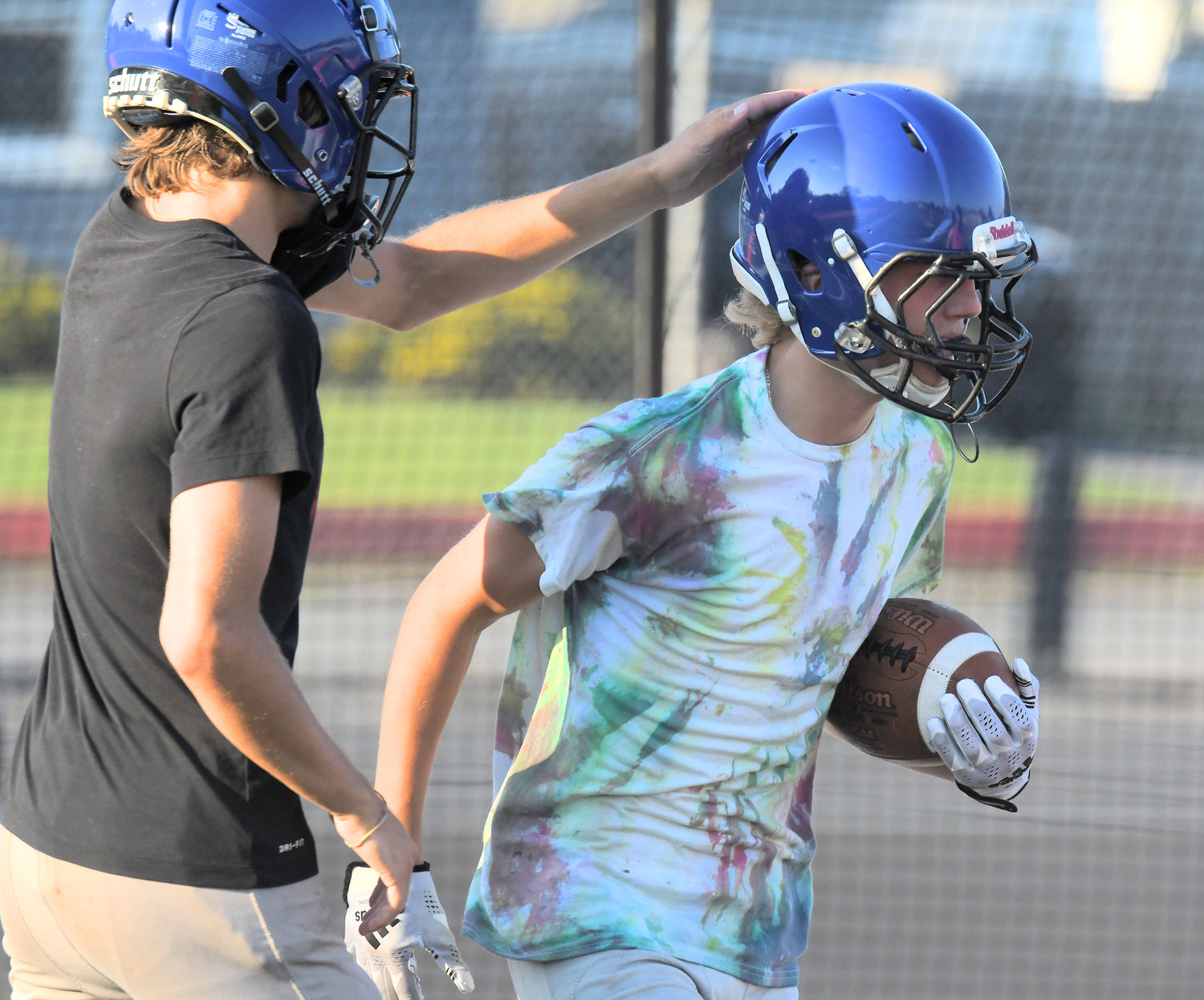 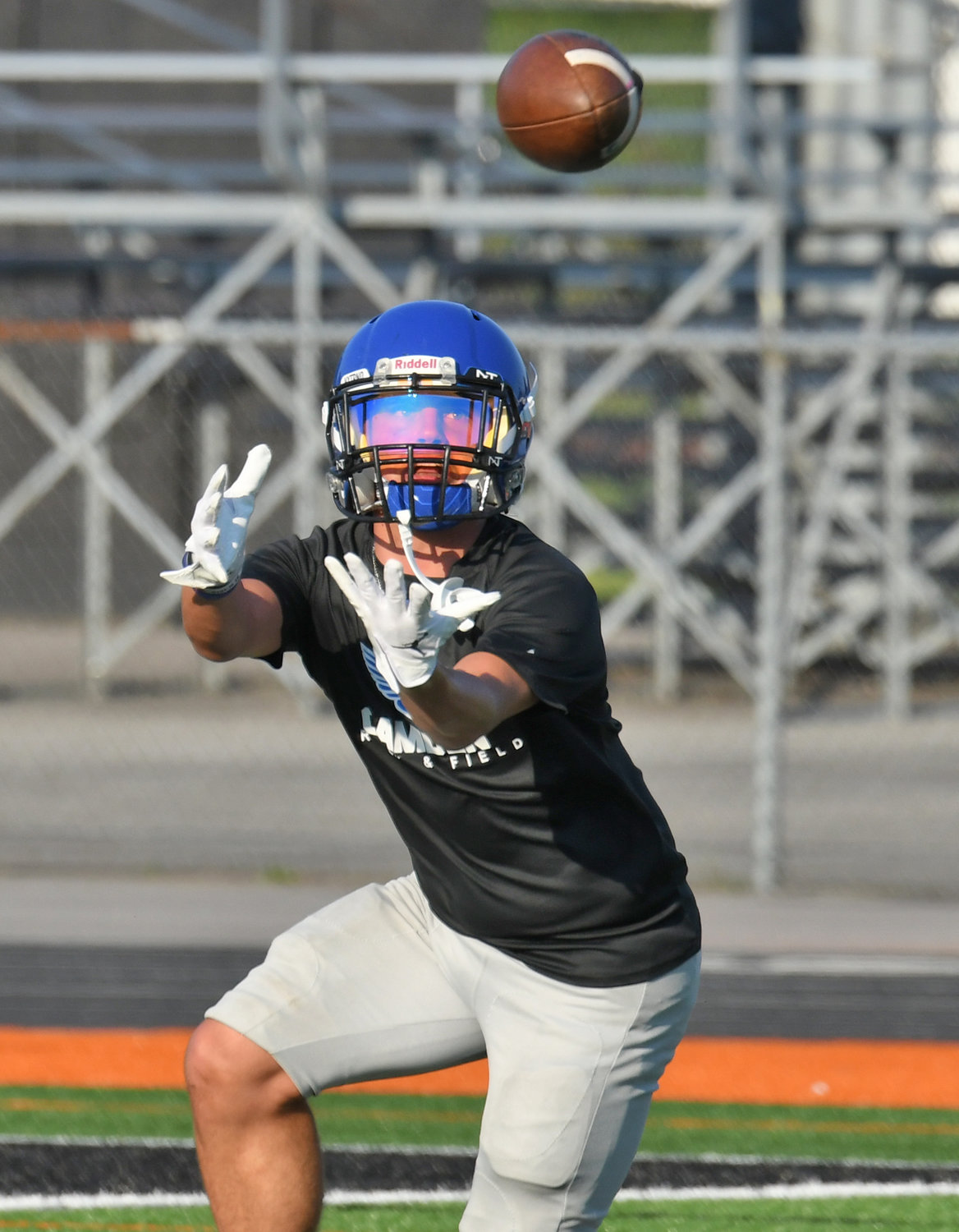 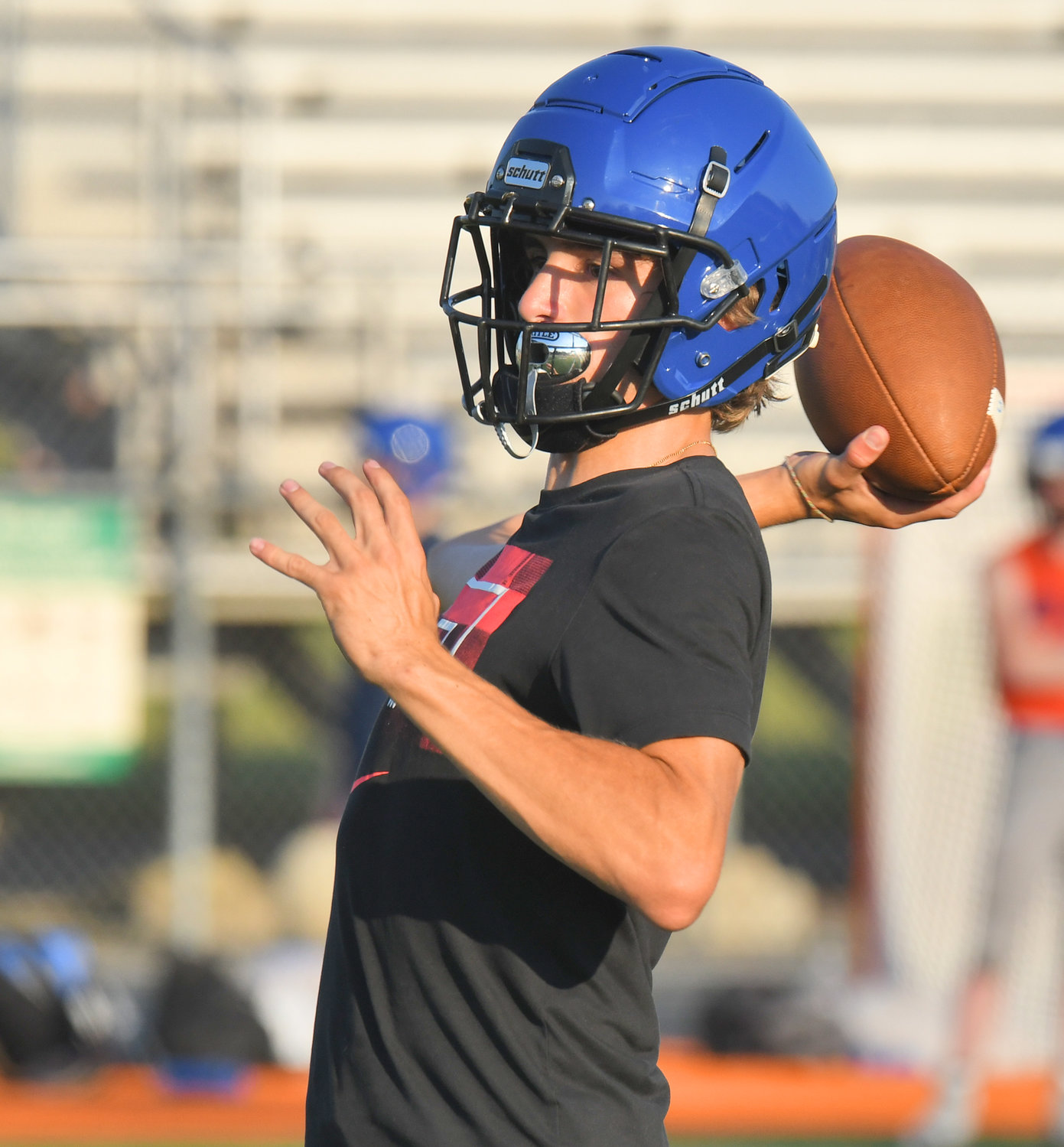 Camden senior quarterback Connor Dean makes a pass during a seven-on-seven against Rome Free Academy. Dean is back as the starter for the Blue Devils, who look to build on last year's 5-3 season.
(Sentinel photo by John Clifford) 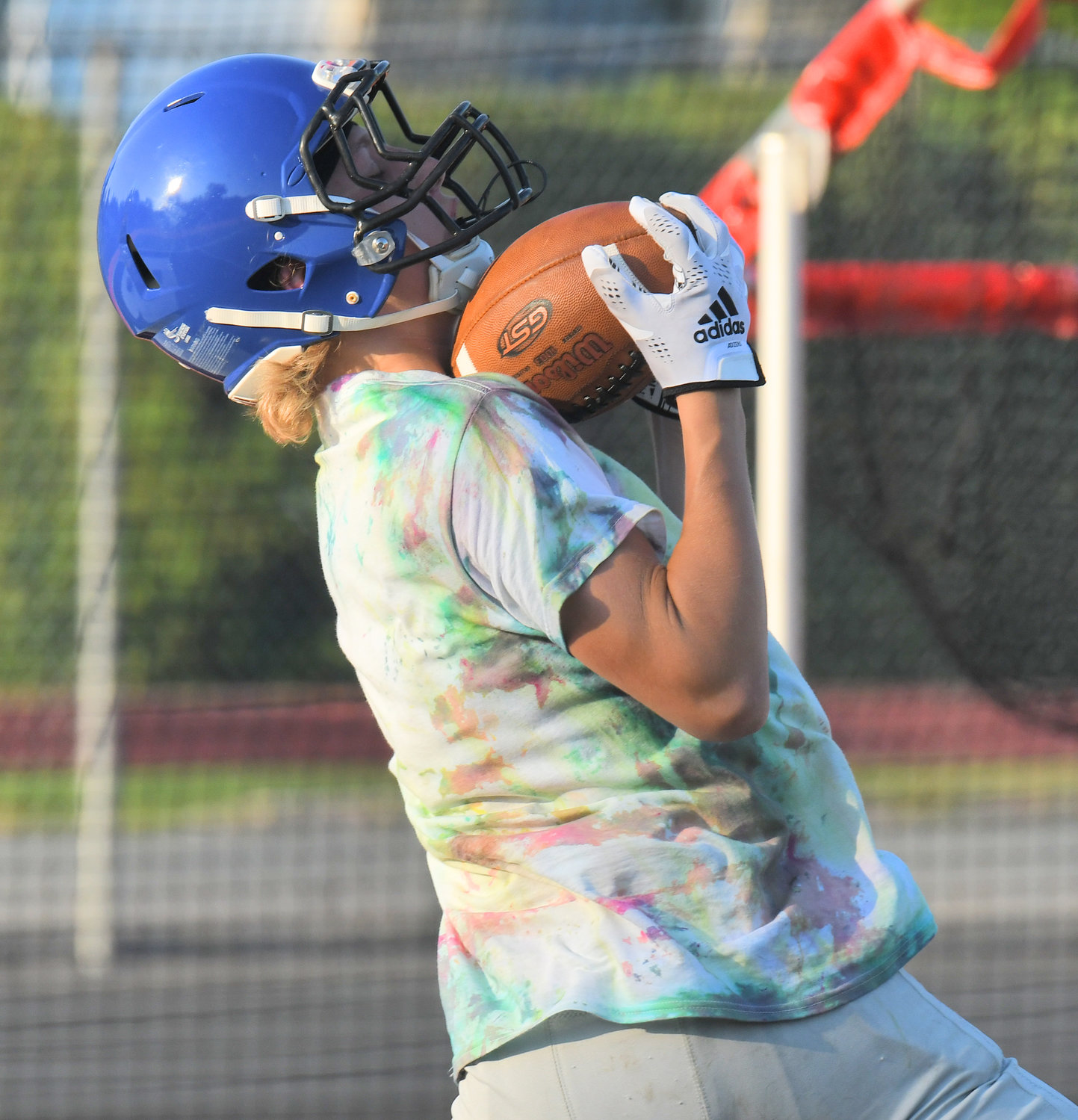 Camden junior running back Trey O'Rourke catches a long pass during a seven-on-seven against Rome Free Academy. O'Rourke will be part of a crowded backfield but the Blue Devils could be able to turn that into an advantage as the team tries to establish a power run game early in the season.
(Sentinel photo by John Clifford)
Previous Next
Posted Friday, September 9, 2022 6:30 pm
Camden’s football schedule

CAMDEN — The Camden football team is dominated by seniors this season, with 21 of the 34 players in their final year of playing at the high school level. The Blue Devils bounced back from two down years to put together a winning season last fall.

“We’re looking for our senior class to lead us this year,” said seventh year head coach Jake Bates. “They’ve really helped turn the program around from where it was three years ago.”

The Blue Devils were 5-3 last season with a loss to the Institute of Technology Central in the Class B quarterfinals.

Camden will start the season with a 7 p.m. kickoff on Friday, Sept. 9, hosting non-league opponent Chittenango.

The team must replace a number of key contributors from last season, Bates noted. They include running back-linebacker James Christmas, linebackers Ashton and Hal Pickering, lineman Paul Heller, lineman-linebacker Colin Boyd and Aiden Reed and Zana O’Hara, both at receiver-defensive back.

But the players back for another year who will help the team are also plentiful.

Senior Connor Dean is back for a third year starting at quarterback and defensive back. Junior Brian Gonzalez played some quarterback and reciever, and will appear in the defensive backfield again. When Gonzalez is at quarterback, Dean can also move to receiver, Bates noted. “Connor is just a gifted, natural athlete. He makes plays.” He’s been working on scrambling and making something out of broken plays. “He’s shown a lot of progress on that.”

Seniors Noah Morse and Trey Kimball return at running back. Junior Trey O’Rourke will get carries as well, as could classmate Jeff Flatt. Both are new to varsity this season. Also at running back are seniors Aiden Pritchard and Sean Seymore and junior Dalton Wines.

Two sophomores new to varsity who could be contributors in the pass game as well are receiver Isaac Lynch and tight end Carson Kimmel. Both are bigger guys who can run, Bates noted.

Despite losses among last year’s senior starters, the Blue Devils’ offensive line has been rebuilt around three starters from last year who are all now seniors. Gavin Kuc is back at left tackle. Joshua Salsman will start at guard (and will also get time at fullback). Tyler Spencer moves from tackle to guard. Others competing for playing time on the line are seniors Doran, Ryan Beaulac and Hayden Johnson. Senior Lyle Walker could also seen split time at fullback and guard.

“We’re taking the same approach offensively,” Bates said. “We want to establish power running early in games and early in the season. And we have offensive weapons in terms of speed so we can run spread and trips and stuff.” The preseason was all about building “some more mental toughness into the team.”

When Bates took over the program, it was more of a spread offense, a finesse team with speed. About four years ago he returned the Devils to a traditional offense with the quarterback under center and a ground-and-pound attack. The team went 2-6 in 2019, then 0-5 in the spring season that was abbreviated by the COVID-19 pandemic. Last year the team bounced back for a winning season. “We’re hoping to continue to build on that, to get kids to buy in to the physical nature of football.” In Class B, he said, “we have to be physical to win.”

Defensively, Bates said, “Our game plan is 11 hats to the ball.” He continued, “Distance equals value when you’re playing defense. The farther you are from the ball when there’s a tackle the less value you have to our defense.”

It will start up front with linemen Beaulac and Johnson at tackle, with Kimball coming in on passing downs as an undersized power rusher. Kuc and Spencer will get time inside as well. The ends will be MacArthur, Lynch, Kimmel and Salsman. Seymore will appear on the line and at linebacker.

Also on the line are O’Halloran, Doran, Parmeter, Forbes, O’Neil and Grinnell.

Flatt and Kimmel will lead the linebacking corps. Morse, Plumley and Walker will all have a hybrid role, part linebacker and part safety.

Other linebackers are Wines, Edwards, Sleeman and Simmons.

Dean will also be at safety again this season. The primary cornerbacks are Jackson, Gonzalez, O’Rourke and Reader. Kimball, Barrett, Rapp, Pritchard, Leonard and Odom are also in the defensive backfield.

What that playoff loss taught, Bates said, was “where we had to get better from last year … in our preparation.” Now the team knows it must get better as the season goes on, has learned how to warm up and how to get ready for practices and games. “We didn’t play our best game when we needed to. That’s a goal this year, to play our best at the right time.”

The schedule offers few easy games, Bates said. “Class B is always tough.” The team does start with two home games (Sept. 9 against Chittenango and Sept. 16 against Cortland) and ends at home against Central Valley Academy on Oct. 21. “That’s a pretty nice setup for a schedule.”

The first road game is against Oneida Sept. 23. The team, which Bates called “tough,” has a new head coach, Matt McCoy, “and I heard he’s doing great things over there. Oneida has always been a battle for Camden.” Westhill was strong last year with young players. Indian River is dropping down from Class A, where the program had success. CVA, the regular season finale, is always tough too, he said. But, he noted, he’s upset not to play Vernon-Verona-Sherrill. “We’ve always had great battles with VVS over the years so it stinks that we lost that game.”

Bates concluded: “For everything people say we lost, we definitely gained.”