Evidence of apparent growth in homelessness raises concerns in Cortland

Scraps of a homeless encampment lay near the West Branch of the Tioughnioga River in Cortland.

Evidence of apparent growth in homelessness raises concerns in Cortland 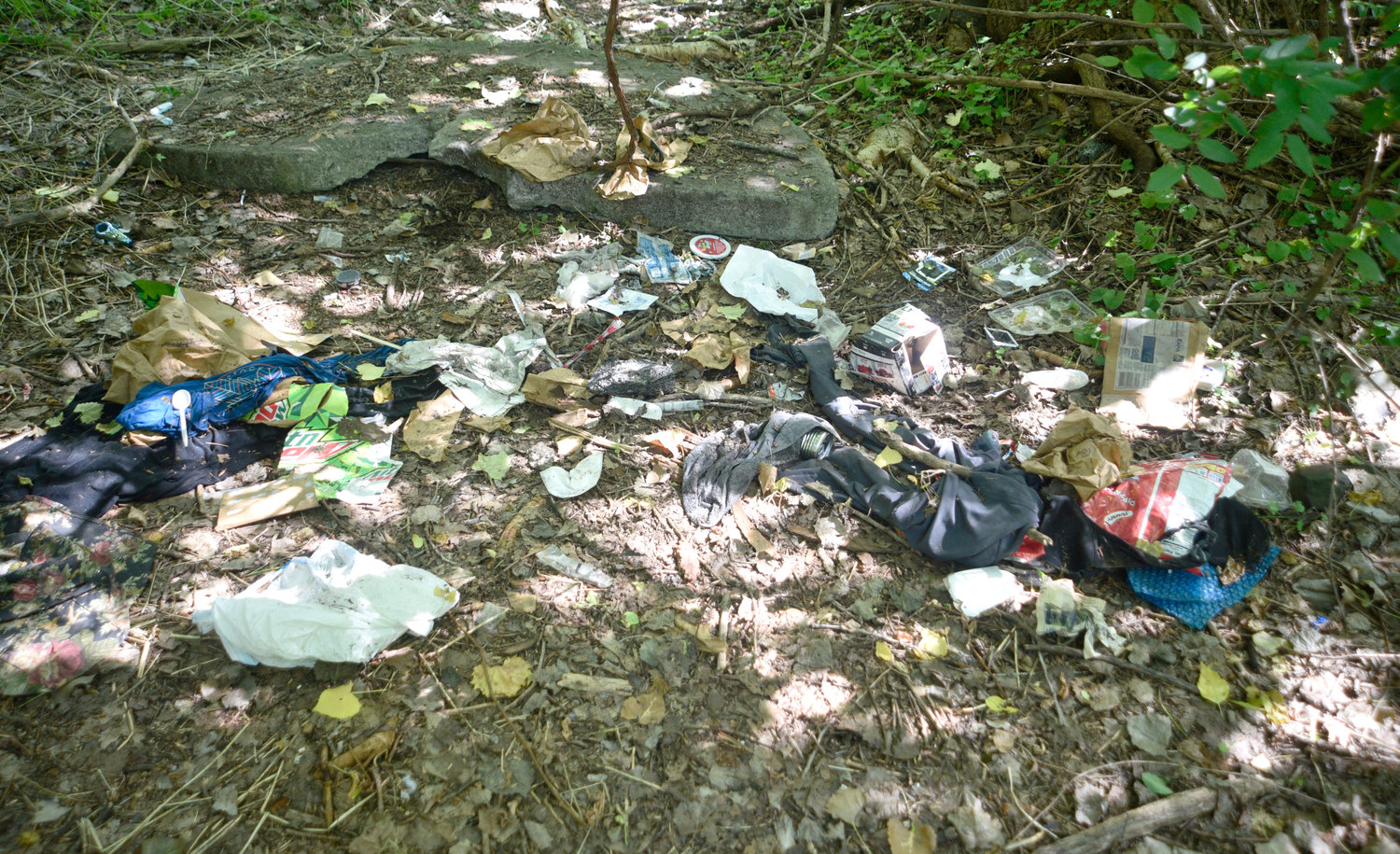 Remnants of occupants litter the ground of the wooded area in the northeast corner of the Riverside Plaza property in Cortland.
(AP/George Murphy-Wilkins/Cortland Standard) 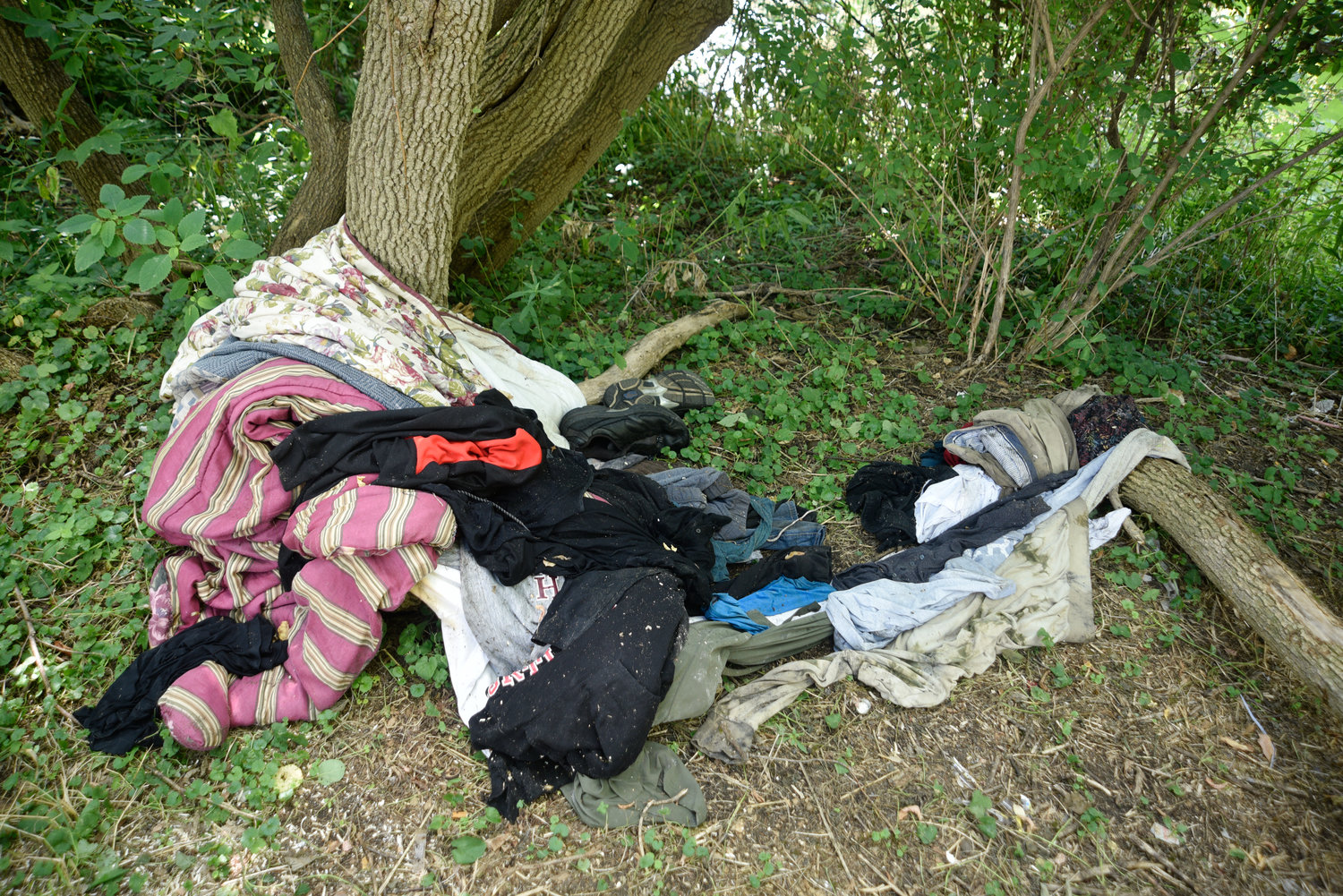 Scraps of a homeless encampment lay near the West Branch of the Tioughnioga River in Cortland. Piles of blankets and clothes, a mattress topper, and trash spread throughout the thicket at the edge of the Riverside Plaza parking lot.

Empty cups of yogurt, plastic takeout containers, and cans of alcohol sat in the dirt. Farther down the trail, the brush got denser and the ripe smell in the air grew stronger. An old fire pit, garbage bags, chewing tobacco containers and a glass pipe awaited.

At the edge of the river, a pile of white packets with blue ink generally used for opioids and heroin overflowed from a cupping root.

Cortland’s homeless population is the largest that Deputy Police Chief David Guerrera has seen in years. “We’re constantly getting calls about homeless people,” he said.

Police have found people sleeping in parks and bushes, or seen people walking around with shopping carts. Enough of them so that Police Chief Paul Sandy said this year has seen the biggest rise in homelessness by far.

He said the situation is “far more visible than it has ever been.”

Homeless people often have mental health problems or deal with substance abuse, Sandy said. Others, said Lt. Cheyenne Cute, face addiction. In his experience, homelessness and addiction are tied. “A lot of them are habitual drug users,” he said.

Officers seek people without housing, meet with them and try to connect them with support agencies.

“Some, we are successful. The vast majority refuse,” Sandy said, and there’s little police can do. “They are choosing to live this lifestyle,” often citing the rules to use public services.

That lifestyle, at least for some of them, is outside the Riverside Plaza off Clinton Avenue, said Alexis Muraco of Empire Management, which owns the plaza. Plaza managers have complained to authorities of homeless people rummaging through the garbage and sometimes running around naked in the parking lot.

“It’s getting worse as we go,” Muraco said.

Governments had declared a moratorium on evictions, and other housing complications have arisen, Monroe theorized. “Limited housing stock, rising rents, an end of the pandemic eviction moratorium, unmet mental health and substance use needs, bail reform, etc.,” she said in an email.

The county Department of Social Services has programs to help, but they have requirements people must comply with, she said. And homeless people need to accept help.

Some people who need the help may no longer be eligible because of conduct problems, Sandy said, adding that while the community has resources to help, it lacks a mechanism to compel people who accept help.

“We know we need more affordable housing and we know many people need to be offered and accept support to succeed,” Monroe said. “I think every service provider across New York State and possibly across the country is currently seeking short and long-term solutions to this complicated problem.”

People with no place to live often lack transportation, too, so what living situation they have must be within walking distance of work, food and all the other things required to live, Lockwood said. In a rural community like Cortland County, that pushes them to the city of Cortland.

This is “increasing the number of people looking for apartments in an area that already does not have enough affordable housing,” which puts a strain on the city, he said.

Catholic Charities has programs to help, he said, such as the Solutions to End Homelessness Program and Emergency Solutions grants to help people move up to apartments from motels or shelter-less living. But monthly referrals have doubled, to 40 to 60 per month from 20 to 30. He thinks that might be related to the end of the eviction moratorium.

“Now that eviction proceedings have returned to normal, we have seen an influx in people calling with eviction cases.” Lockwood said.

A way to be contacted

Homeless people face other hurdles. To get into housing facilities, people need to have a way to be contacted, he said — a phone and minutes to use.

This means homeless people need a phone or phone access, and they need a mailing or email address — essential when filling out and updating applications, Lockwood said.

“It is difficult to expect someone to keep up with their appointments and requirements that come with living in motels, or other temporary living situations, if they do not have consistent access to a phone or internet,” he said.

Cortland County has no year-round homeless shelters. People facing homelessness can go to the Department of Social Services, which places them into a motel until more permanent arrangements can be made.

The Salvation Army operates warming centers when the temperature goes below freezing, but Lockwood said they have limited hours, and Sandy said the program has specific conduct rules.

A group of service providers, housing agencies, law enforcement and a representative from the state Office of Temporary and Disability Assistance meet regularly to explore the need and seek resources to meet it, Lockwood said.

In the meantime, people and programs not specifically tasked with helping homeless people are stepping in.

Kim Hill, executive director of Cortland Loaves and Fishes, said she has seen an increase in services, nearly doubling from the 50 meals a day before this year. Part of this is because “food stamps aren’t going as far.” Not everybody who uses the service lacks housing, she said, but some do.

Jen Graney, director at the Cortland Free Library said homeless people might use the library for its restrooms or to charge their phones. More now than the past year, she added. It’s every day, now. Some are new faces, Graney said; some ask for directions to service providers.

The library offers a safe space with the computer and internet access essential to fill out social service and other applications. That attracts people who lack housing and now service providers to connect with them.

“Since Cortland doesn’t have a homeless shelter, I think they know it’s a place where they are welcomed with kindness and a smile,” Graney said.

Still, the library closes. And when it does, homeless people have to go somewhere. For some, that’s to the encampment at the Riverside Plaza, where farthest back, the stench refused to be ignored.

Through deep brush, two dugouts peaked out of the weeds. Ragged clothes were strewn in front of a log that guards the makeshift bedrooms: places to sleep, clothes, sneakers, even a wooden chair. Just no walls or ceiling.