The Erie Canal was the most successful 19th Century project of its kind in the United States.  It reduced transportation costs across the state by more than 90 percent, and reduced the typical … 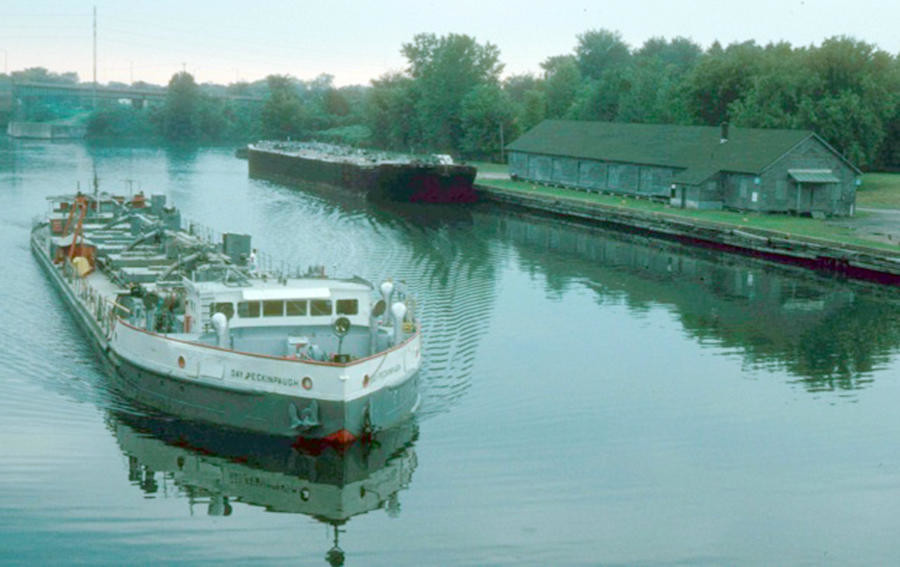 HEAVY HAULER — The ship Day Peckinpaugh makes its way through Rome on the Erie Canal, past what is now Bellamy Harbor Park. Named for the brother of a New York Yankees player, the ship is listed on the National Register of Historic Places, and is kept in Cohoes, where it is being restored. (Photo courtesy Canal Society of New York) 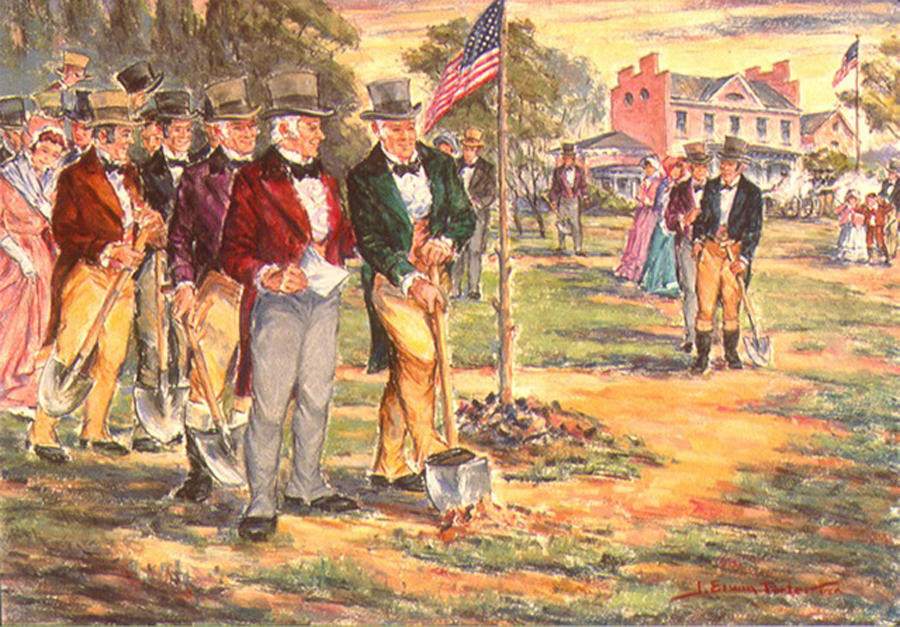 DIGGING IN — The first shovel full of earth was dug for the Erie Canal, as depicted in this drawing, on July 4, 1817, in Rome. In the background is the U.S. Arsenal — now known as the Arsenal House — at 514 W. Dominick St. (Photo courtesy Rome Historical Society)
Previous Next
Posted Sunday, July 9, 2017 9:00 am
Patrick Reynolds and Chip Twellman Haley

The Erie Canal was the most successful 19th Century project of its kind in the United States.

It reduced transportation costs across the state by more than 90 percent, and reduced the typical six-week wagon trip from Albany to Buffalo to merely a week on the canal. Tolls were charged to pay for the canal, and it was so busy that it showed a profit in only ten years. As thousands of settlers poured west, the Erie Canal brought raw materials and finished products from distant markets and cities. Construction of the enlarged Erie Canal began in 1836 and the canal was rerouted through downtown Rome (current Erie Boulevard), whose growth subsequently caught up with the other canal boom towns.

In 1817, New York State governor DeWitt Clinton had persuaded the state Legislature to build the $7 million canal from Buffalo to Albany. Because Rome is located in the middle of a long stretch of flat ground in the middle of the state, the canal commissioners decided to begin construction of the Erie Canal here.

When the canal was completed, Gov. DeWitt Clinton embarked on a nine-day journey on it and celebrated in over 30 towns. He transported a keg of water from Lake Erie to New York City where he dumped it into the Atlantic Ocean, symbolizing the unification of the country.

Here are a few little-known facts about the Erie Canal:

• Although it’s often said that Irish immigrants built the canal, records show that 75% of canal workers were native upstate New Yorkers who lived and worked along the canal lands.

• Although no official engineering training was available in the U.S., the canal became an improvised school of engineering. Pioneering men devised ingenious ways to overcome the challenges of building a canal through 363 miles of wilderness.

• Rome resident and lawyer Benjamin Wright taught himself the principles of engineering. By the time the Erie Canal was commissioned, Wright was one of the most knowledgeable surveyors in the state. He was chief engineer of the Erie Canal from 1817 – 1826. He later served as engineer for the Delaware and Hudson Canal, the Welland Canal, and a proposed ship canal on the St. Lawrence River. Like other canal engineers, he eventually turned his talent to railroad building in the mid-1800s.

• The son of a farmer, John Jervis started his career on the canal as an axe-man, clearing trees for survey contractors. After his first season, he spent the winter studying under Benjamin Wright and his assistant Canvas White. Jervis quickly rose among the ranks and was made resident engineer of a 17-mile section of the canal near Amsterdam by 1823. In 1825 he resigned his canal commission and went on to become chief engineer of three major canal projects, chief engineer of the 41-mile Croton Aqueduct which provided a water supply to New York City, consulting engineer for the Boston water system, and construction supervisor of America’s five earliest railroads.

• Canvass White, of Whitesboro, traveled to England to learn how canals were built there. He later found a type of limestone in Madison County that, when made into cement, could harden under water. More than 400,000 bushels of this cement were used on the canal, building locks, aqueducts and other features. Expensive imported cement was no longer needed.

• On Oct. 23, 1819, church bells rang and crowds cheered, as a group of officials, accompanied by a band, took a ride along a just-completed portion of the canal, on “The Chief Engineer of Rome,” between Utica and Rome.

• The business of moving goods and people along the canal involved thousands of boats and their crews. In 1845, there were 4,000 boats on the canal, operated by 25,000 men, women, and children. Packet boats, which carried passengers, were largely operated by boat companies, while cargo boats tended to be family owned. In addition, thousands of individuals were employed to maintain and operate the canal itself, including lock tenders, toll collectors, bridge operators, surveyors, and repair crews. There were also merchants, hostellers, liverymen, and shopkeepers along the route, who fed, clothed, housed, and supplied those employed on the canal.

Packet boats carried between 50 and 100 people, had six or seven crew members, and were pulled by a team of horses or mules. Cargo boats were usually family-owned and contained living quarters and a stable in addition to the cargo hold.

• Cargo ships transported many types of raw materials including: grains, lumber, salt, hay, fruit, stones and coal. Wheat was one of the most common raw materials shipped on the Erie Canal. In 1829, there were 3,640 bushels of wheat transported down the canal from Buffalo. By 1837 this figure had increased to 500,000 bushels; four years later it reached one million. Rome itself primarily shipped out lumber, gypsum, stone, ashes, and wheat.

• Between 1905 and 1918, the canal was enlarged once again. In order to accommodate much larger boats, the engineers abandoned much of the original Erie and “canalized” the rivers. However, with growing competition from railroads and highways, and the opening of the St. Lawrence Seaway in 1959, commercial traffic on the Canal System declined dramatically in the latter part of the 20th century. Canal traffic reached a peak of 5,211,472 tons in 1951. By 1995, it had dropped to 21,789 tons.

This column was compiled for the Rome Historical Society by Patrick Reynolds, Society educator, and Chip Haley, retired Daily Sentinel news editor, with photos supplied by Reynolds. Comments, old photos or suggestions for future columns may be emailed to: chiphaley@yahoo.com. Copies of the book “Rome Through Our History,” a collection of some of Haley’s columns, may be purchased at the Rome Historical Society.

The Rome Historical Society, 200 Church St., is open from 9 a.m. to 3 p.m. Tuesday through Friday, and from 10 a.m. to 2 p.m. Saturday. Go online atwww.romehistoricalsociety.org, visit their Facebook page, or call 336-5870 for more information.