The U.S. Environmental Protection Agency has completed cleanup work to address asbestos contamination at the Charlestown Mall site, according to an announcement Wednesday by EOA officials. 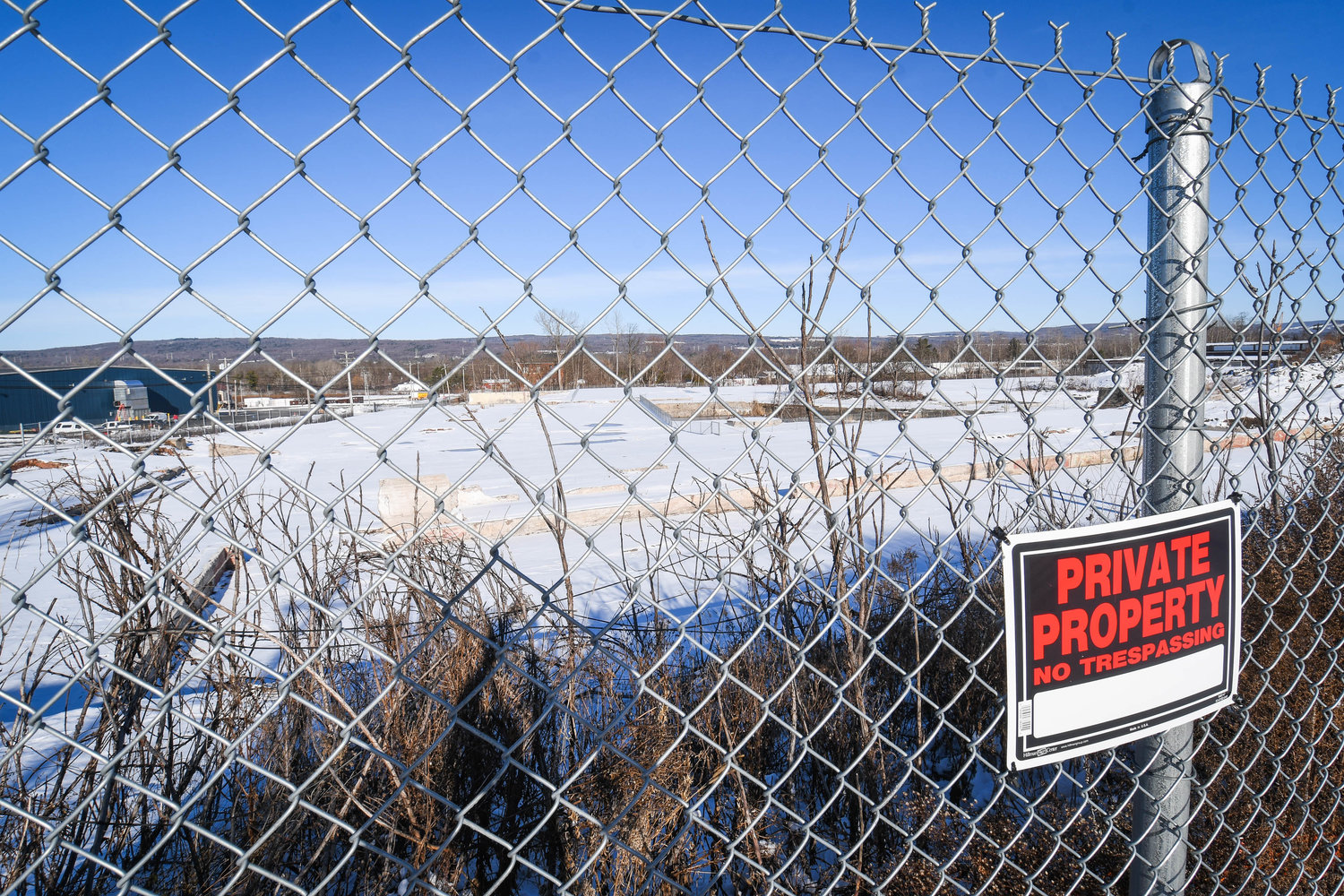 The U.S. Environmental Protection Agency (EPA) has completed cleanup work to address asbestos contamination at the Charlestown Mall site. Nearly 30,000 tons of debris were removed from the site.
(Sentinel photo by Alex Cooper)

Here is an aerial view of tghe site structures at the former Charlestown Mall in Utica after a fire in August 2020.
(Image courtesy USEPA/Anubis Drone Photography/TJ Grady)

After (October 2022): View of site conditions, from the northwest corner of the site. Turner Street is visible to the right. Remaining concrete slabs are shown in the foreground. Bleecker Street is visible in the background.
Previous Next
Posted Thursday, December 15, 2022 10:10 am

UTICA — The U.S. Environmental Protection Agency has completed cleanup work to address asbestos contamination at the Charlestown Mall site, according to an announcement Wednesday by EOA officials.

The EPA removed a total of nearly 30,000 tons of debris from the site and completed all site activities at the vacant structure — much of which was destroyed by fire in August 2020.

The 11-acre site includes properties in both Utica and Frankfort. The structure housed manufacturing and commercial businesses since the early 1900s. It was a weapons manufacturing factory before being repurposed in the late 1970s as a retail shopping outlet and a commercial business complex. It has been mostly vacant since the 1990s when it began a slow decline into disrepair.

The New York State Department of Environmental Conservation (NYSDEC) referred the Charlestown Mall site to the U.S. Environmental Protection Agency (EPA) in 2008 after unpermitted demolition activities at several site buildings released asbestos, a hazardous substance, into the environment. EPA’s Emergency Response program led two cleanups at the site, in 2010-2011 and 2020-2022, to protect people’s health and the environment.

Both EPA cleanups included gathering hazardous substances such as asbestos, polychlorinated biphenyls (PCBs), as well as other toxic, flammable and corrosive liquids, and taking them off site for disposal. EPA demolished and removed remnants of six buildings from the east side of the site in 2010 and 2011 to address the threat of asbestos in building materials and debris. After a major fire in August 2020, EPA fenced the site to prevent access. In 2022, EPA demolished the remnants of 15 more structures at the site.

“The demolition of the former Charlestown Mall site is a win for the safety of our residents. It’s also a good example of municipalities and governmental agencies working together for the safety and well-being of the people we serve,” said Utica Mayor Robert Palmieri. "I would like to thank the Environmental Protection Agency, the town of Frankfort and our federal representatives for getting this done once and for all. We will continue to work with our partners to bring development and opportunity to that historic site.”

“This area is now an opportunity for redevelopment. This site was a contaminated eyesore, but through EPA’s Superfund Program, we are turning blight into might, protecting people’s health, and safeguarding the environment,” said EPA Regional Administrator Lisa F. Garcia. “Over the coming months, EPA will engage with local elected officials and regional economic development leaders to open up discussions about potential future uses at this site.”

In August 2020, a massive fire destroyed more than 500,000 square feet of the former manufacturing and retail space. EPA boarded up the remaining structures to limit access and secured the property in December 2020 by erecting a fence. EPA began the site cleanup in June 2022 by tearing down the remaining structures to their foundations and removing the asbestos-containing waste.

With the cleanup completed, the EPA’s Superfund Redevelopment Program is available to provide ongoing reuse support services to the community to transform this site from a liability into an asset supporting economic development, the announcement said.

The Superfund Redevelopment Program has developed a Charlestown Mall site fact sheet, which can be found online at: https://response.epa.gov/sites/14933/files/Charlestown%20Mall_FAQ_PropertyFactSheet%20FINAL%20v2_508.pdf.

The site, the EPA announcement said, still has all building foundations and slabs remain in place. Some concrete surfaces were broken during demolition, while others remain intact.

The site is in an area zoned for industrial uses and should be evaluated for environmental conditions, as would be appropriate at any former industrial property, the EPA added.