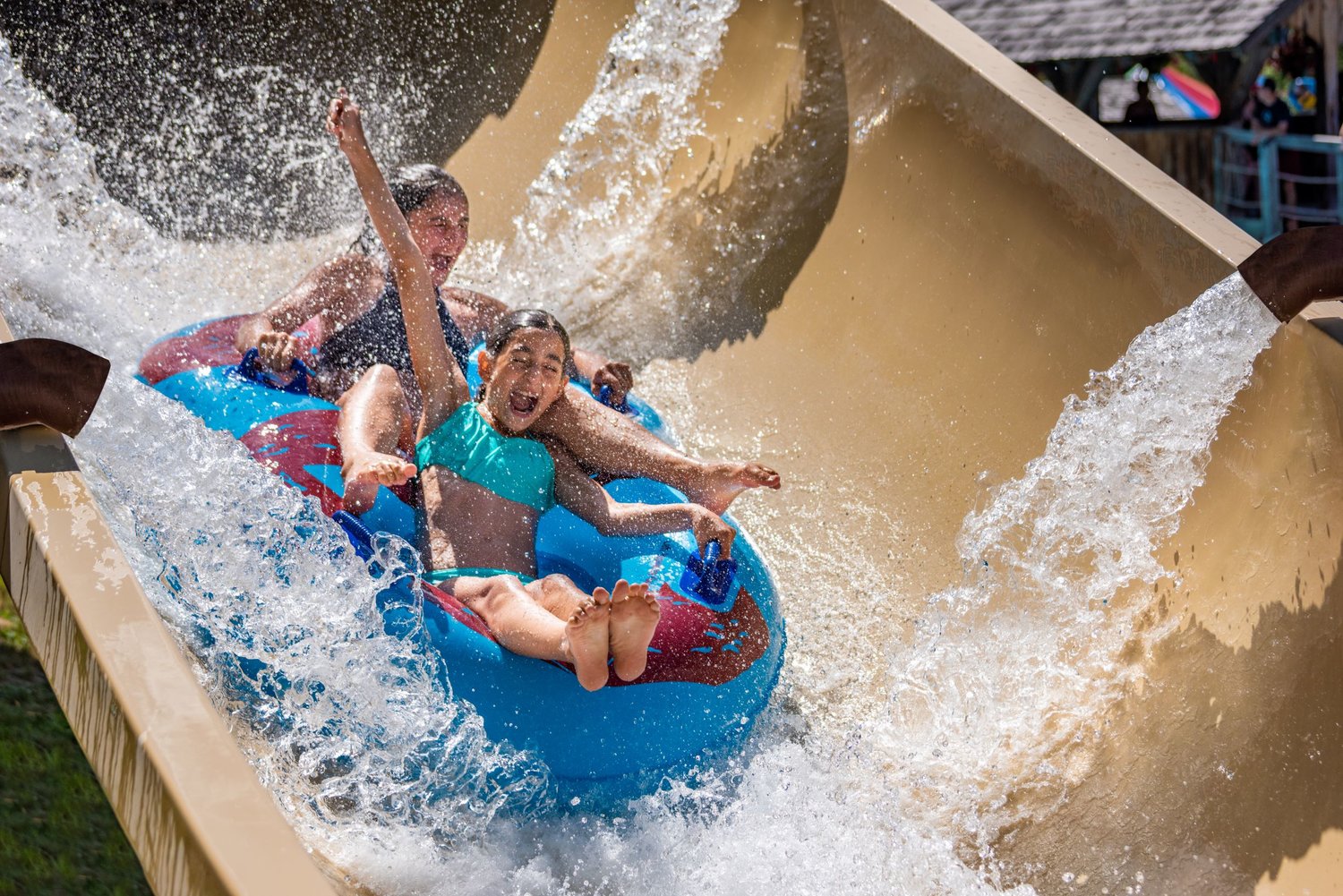 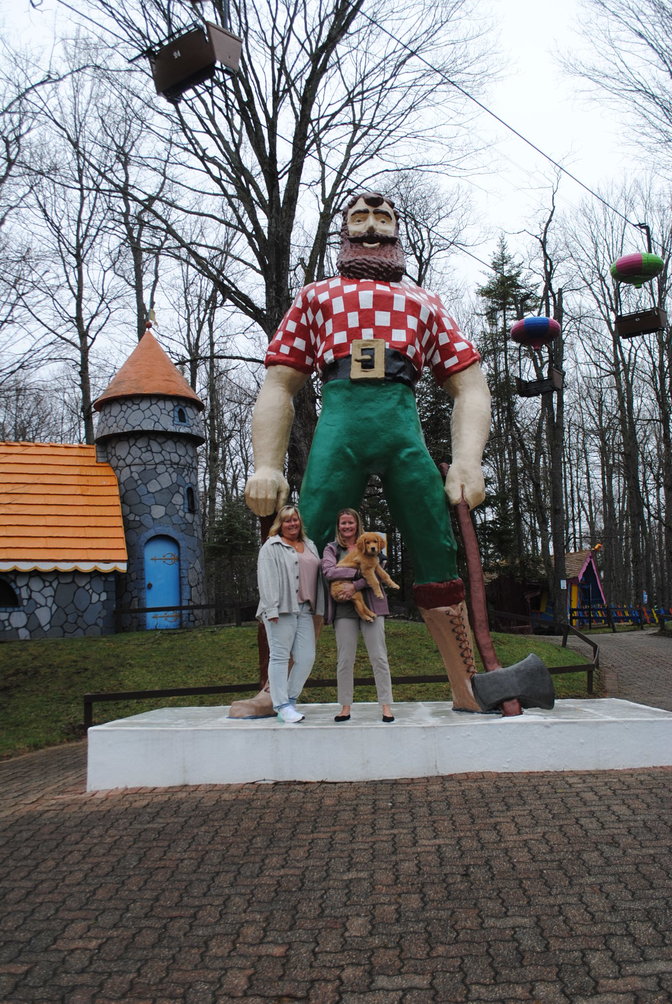 From left, Kelly Greene and Katie Wojdyla with the 18-foot Paul Bunyan that welcomes visitors into the Enchanted Forest Water Safari in Old Forge.
(Photo by Mary Beth Roach)
Previous Next
Posted Sunday, June 12, 2022 7:00 am
Mary Beth Roach, Special to the Daily Sentinel

OLD FORGE — When Enchanted Forest Water Safari in Old Forge opens on Wednesday, June 15, it’ll mark the 45th year that the Noonan family has owned and operated the attraction, and to say it has grown since Tim Noonan first bought it in 1977 is an understatement.

Today, two of Noonan’s four daughters – Kelly Greene and Katie Wojdyla – have co-owned Enchanted Forest Water Safari since 2012, along with Calypso’s Cove, the Old Forge Camping Resort, and Water’s Edge Inn, across Route 28 from the park’s main entrance. The pair continue to improve and upgrade the facility while maintaining some of its traditions that harken back to the 1950s and 1960s under previous owners.

The 70-foot white arch still stands tall in the parking lot on Route 28, a landmark in and of itself; the 18-foot Paul Bunyan (19 feet if you include the base it stands on) welcomes visitors into the Park, and the bright, colorful Storybook Lane Little Houses still delight children of all ages.

“Those traditions are important to us to keep and to continue. All of that is how I grew up,” said Greene.

It is also how many park guests of a certain age grew up, and for those wishing to revisit those days, there is the Museum of Enchanted Memories, opened in 2005, and located in the back of the park.

Enchanted Forest originally opened in 1956, founded by Joe Uzdavinis, who partnered with local landowner and developer Richard Cohen. The latter also owned Old Forge Hardware, which was founded by his father, Moses Cohen, and was the principal partner of the development firm of Cohen, Rice and Romano. Uzdavinis had the vision to create the circus at Enchanted Forest, featuring the Wallenda family trapeze and high-wire stars, according to Mike Farmer, publicity director for the Town of Webb Tourism.

When Tim Noonan bought the park in 1977, he was in his mid-20s, lived in New Hartford, and owned a liquor store in Utica, Wojdyla said, and although he was looking to get into the hotel business, he saw Enchanted Forest was on the market.

Under Noonan’s leadership, the attraction has expanded exponentially.

“He’s definitely been the mastermind behind it all,” Greene said. He decided that he wasn’t going to be able to compete in the roller coaster race between some of the bigger amusement/roller coaster type parks, Wojdyla said. Water parks were just coming on the scene, she added, and he decided it was feasible for the Adirondacks and Upstate New York. “He paved that path in New York State,” Wojdyla. said.

In 1984, Noonan added Wild Waters, Enchanted Forest’s first water slide, and with the addition of more water features, the attraction’s name changed to Enchanted Forest Water Safari in 1988. Wild Waters has since been replaced by The Shadow.

In the mid-1990s, Calypso’s Cove family entertainment center was opened. Noonan would then acquire the Old Forge Camping Resort, previously a KOA site, and then in 1999, a major expansion was introduced at the water park, called the Adirondack Expedition, with features including Rondaxe Run and The Black River, Cascade Falls, The Sawmill, and The Log Jammer. Noonan would then buy the Water’s Edge Inn in 2006. Wojdyla explained that her father’s decision to acquire the campgrounds and the inn was based on providing more beds that would feed the business.

Today, Enchanted Forest Water Safari consists of about 65 acres featuring 33 water rides and 12 amusement rides, and it draws about 200,000 people a season, which runs from mid-June to Labor Day, approximately 83 days, Greene pointed out.

The 130-acre campgrounds area consists of 132 cabins, 60 cottages, 131 RV sites, 24 tent sites, 42 year-round sites, and Lake Serene. Wojdyla estimated that they handle 10,000 reservations in the campgrounds throughout the year, and like the campgrounds, Water’s Edge Inn, too, is open year-round, with 77 rooms.

The Park advertises that it’s “Where the Fun Never Stops.” But that also means that the work to create that fun can be constant, as well. The sisters oversee every aspect of the park’s operation, from the rides to the games, from the gift shop to ground and ride maintenance. They bring decades of experience to that job, having worked in many different departments of the park growing up. They also keep up with the replacement of aging rides and new technology in the industry. They attend expos hosted by the International Association of Amusement Parks and Attractions, participating in classes and seminars and meeting other water park operators. They work with Canadian-based company, ProSlide Technology Inc., on developing and/or updating many of the water rides, which are then designed to fit in with the topography of the park. And of course, Dad, too, is a consultant for them. “No matter what, he’s our dad, and he’s going to give us his opinion,” Greene said, with a chuckle.

Three new rides were added in 2021, which are certainly not for the faint-of-heart: Serengeti Stampede, a 293-foot-long four-lane mat racer; Mamba Strike, a 285-foot enclosed body slide that winds around the Stampede with a trapdoor that drops guests onto the slide; and Killermanjaro’s Revenge, a 207-long speed slide that also drops visitors through the floor and into the slide.

While many water parks are now owned by large corporations, there are still a few that, like Enchanted Forest Water Safari, remain family-owned, but Greene admitted it’s a dynamic that’s getting more unique. The sisters work well together, and they play off each other’s strengths, Wojdyla said.

Enchanted Forest Water Safari may be “where the fun never ends,” and it makes a big splash in the economic impact of the town of Webb and the surrounding areas.

During the summer, Wojdyla said they employ about 450 people across all their properties, and according to Farmer, they are Herkimer County’s largest employer.

Farmer also noted that while it’s not possible to provide an exact number on the economic impact of individual businesses, “Enchanted Forest Water Safari is a cornerstone of our summer tourism economy, and the economy of the Town of Webb is based totally on tourism.”