The power running game of Elmira overwhelmed the Rome Free Academy defense Friday in a 62-28 win for the Express and spoiling Homecoming at RFA Stadium. Brady Keefe ran for 173 yards and three … 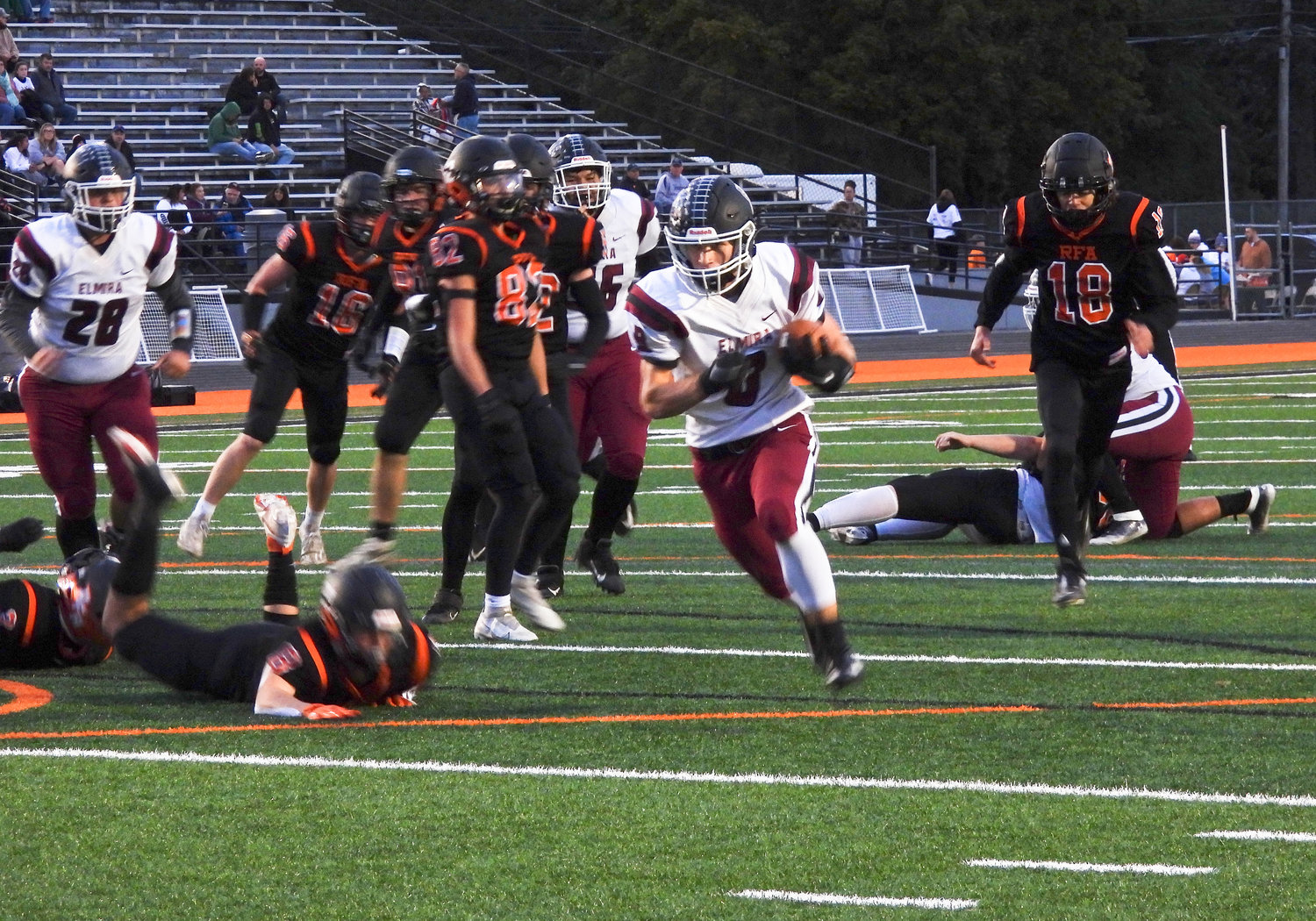 Elmira running back Brady Keefe heads for the end zone in the first half of the team's 62-28 win at RFA Stadium Friday night. Keefe ran wild in the game, going for 173 yards and scoring three times.
(Sentinel photo by Charles Pritchard) 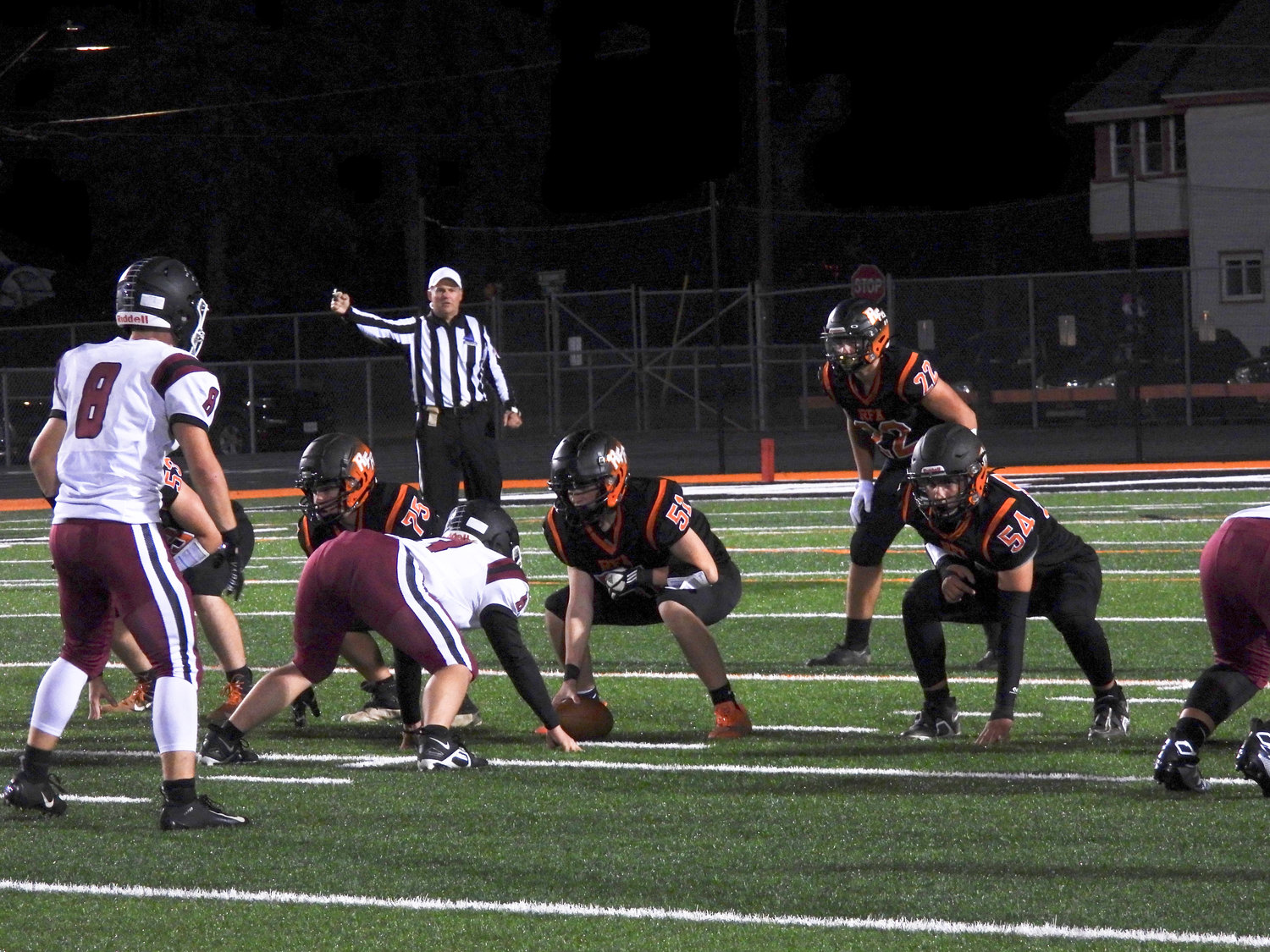 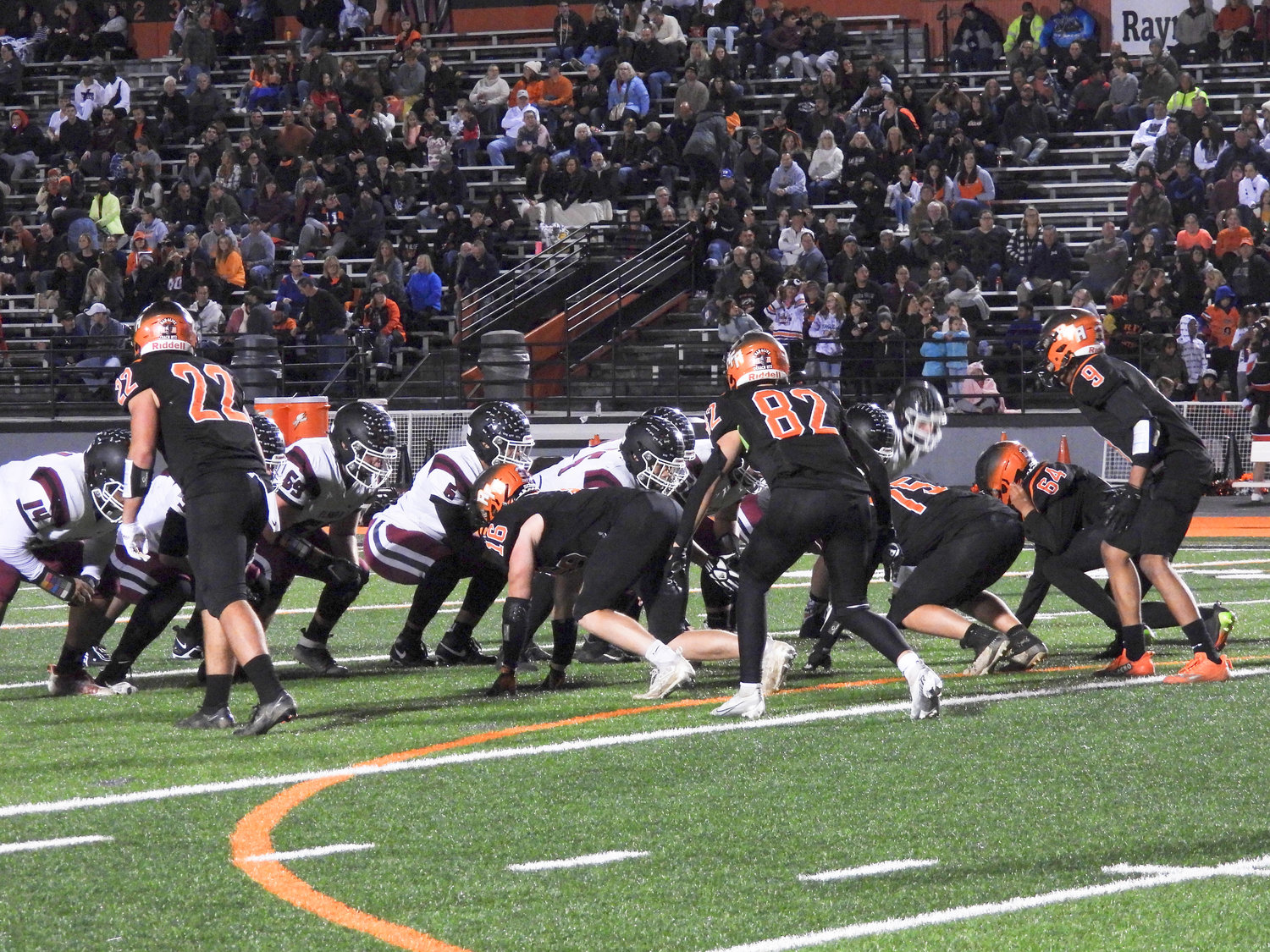 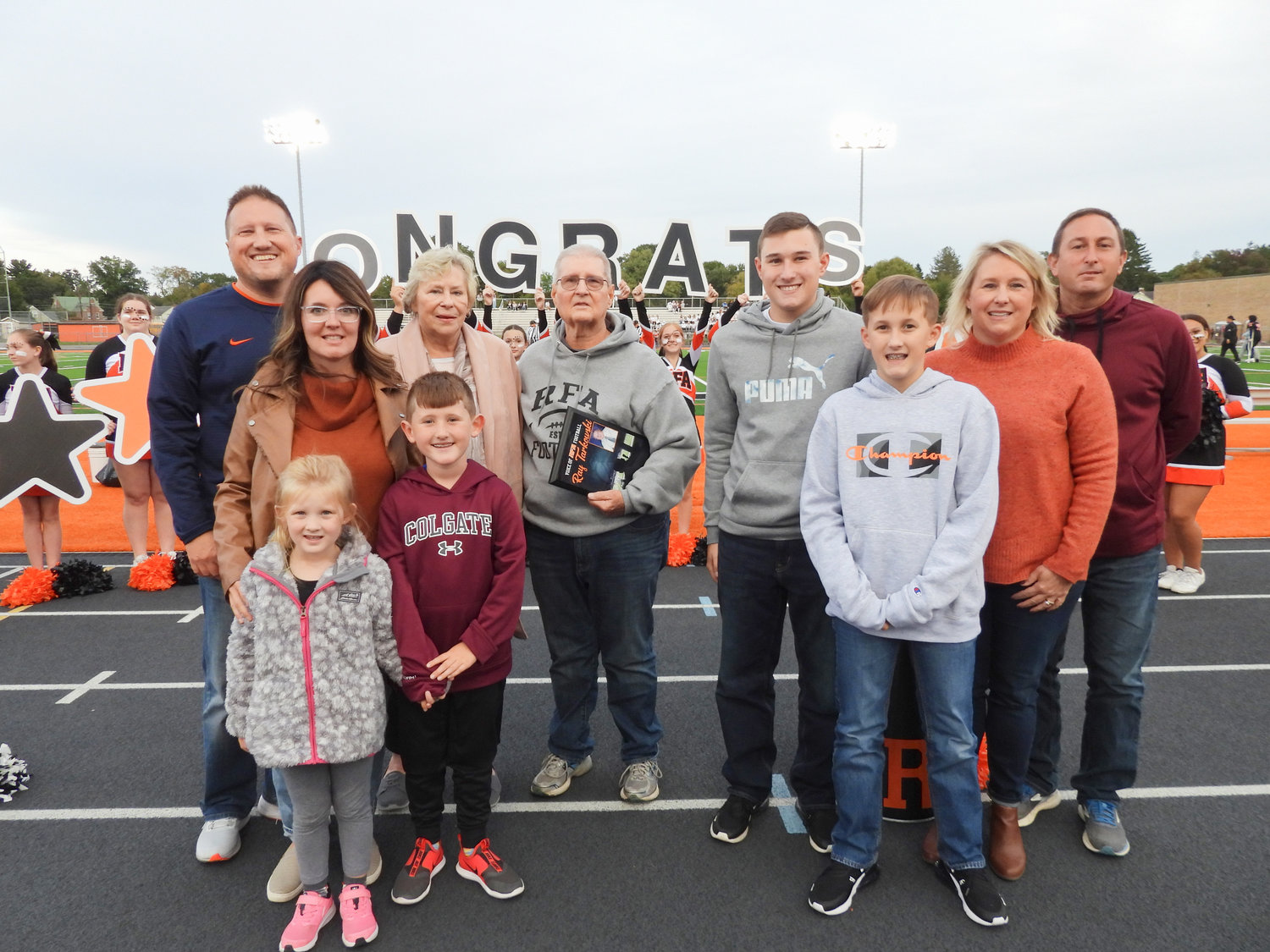 Raymond Tarkowski poses with his family, with his plaque in hand, before Friday's Rome Free Academy football game at RFA Stadium. The voice of the RFA football team was honored for his 49 years at the microphone when the district unveiled the press box at the stadium that is now named in his honor.
(Sentinel photo by Charles Pritchard) 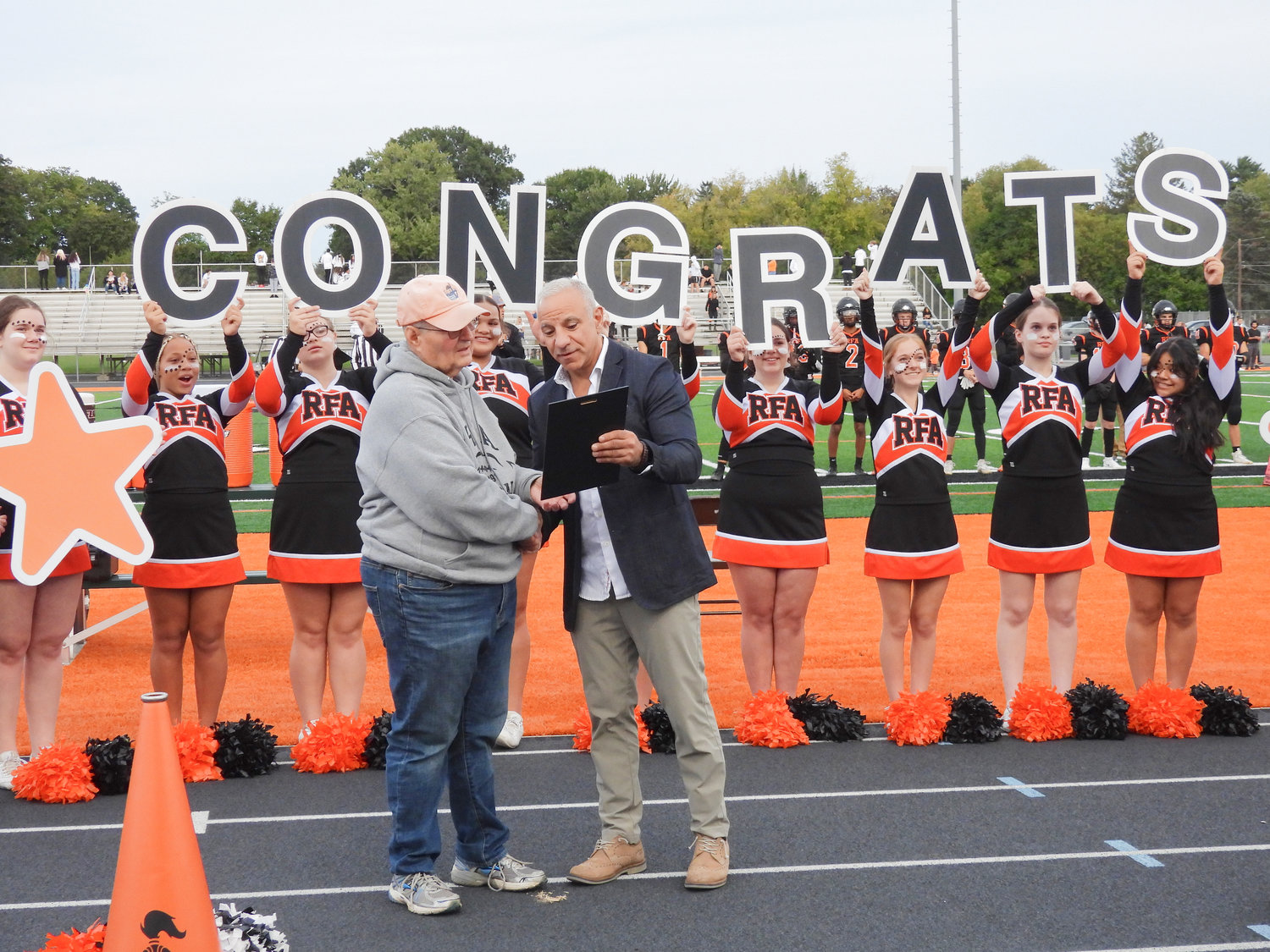 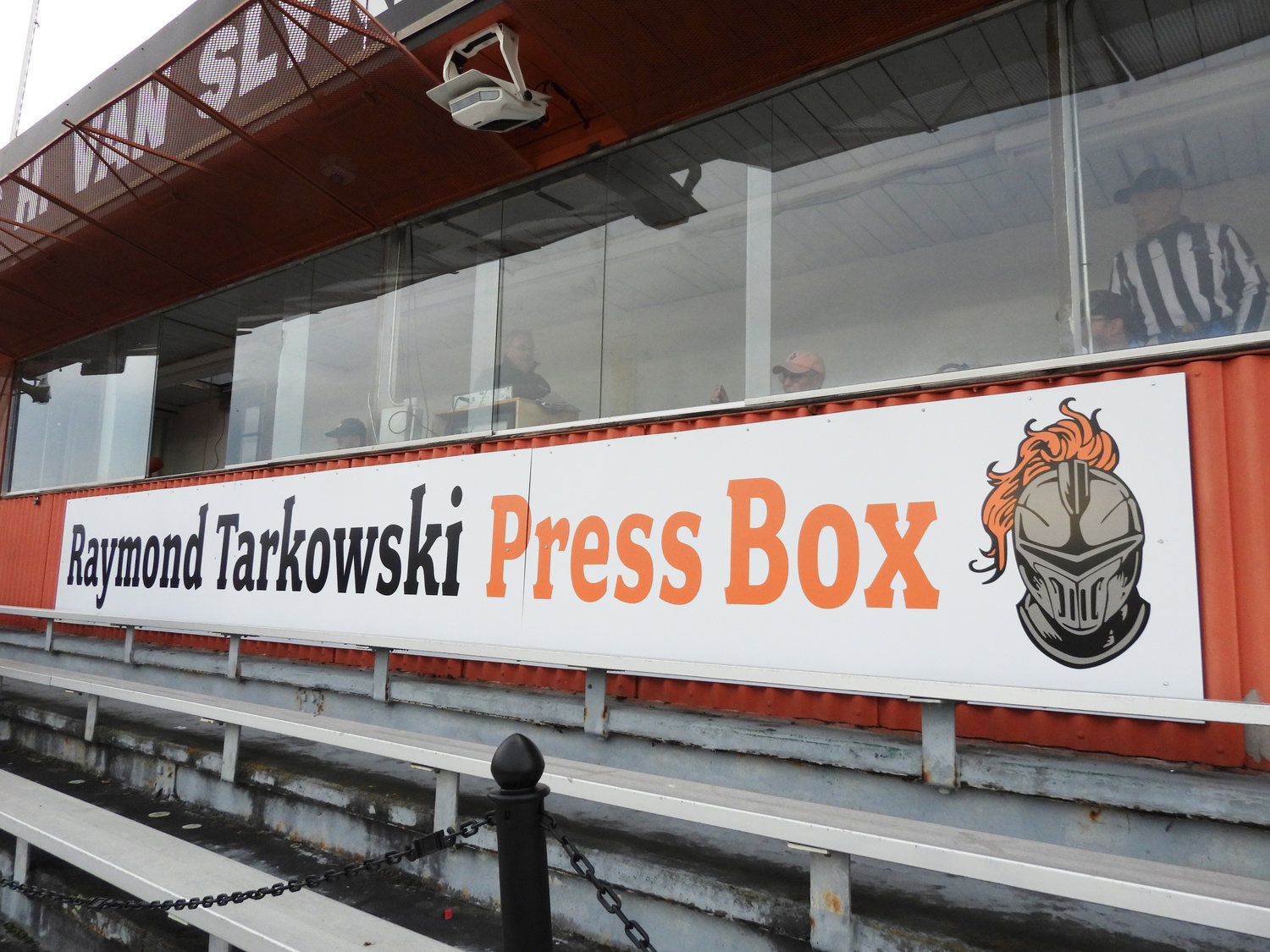 The power running game of Elmira overwhelmed the Rome Free Academy defense Friday in a 62-28 win for the Express and spoiling Homecoming at RFA Stadium.

Brady Keefe ran for 173 yards and three touchdowns for Elmira. Amir Williams had 165 yards and two TDs, while Johnnie Garcia added 60 yards as well. Quarterback Evan Garvin had a 61-yard TD toss to Garcia on his only pass of the first half and later in the half ran one in himself from a yard out. In the second half he threw twice, with one of them a seven-yard scoring throw to tight end Christopher Woodard.

To stop the Elmira run game, the defense needed to make good reads, said RFA head coach Jake DerCola after the game. “If we’re reading our keys and getting off the ball, we can play. But if we’re slow and hesitant it’s trouble. And that is what they did to us.”

RFA started strong with the game’s first touchdown. Quarterback Evan Carlson-Stephenson hit Jack Lawless for a 41-yard TD strike to go up 7-0 on the game’s opening drive. But the RFA offense couldn’t stick with the prolific scoring of the Express running game.

Carlson-Stephenson found Surafia Norries twice in the first half on passing scores, the first for 27 yards when Norries wriggled out of a tackle near the goal line then later when he barely stayed inbounds as he went out the back of the end zone. The Black Knights trailed 48-20 at the half.

Sal Martelli ran in from the six for RFA early in the second half, making it 48-28 but the RFA offense could not get the score any closer. He finished the night with five carries for 34 yards and the score and well as four catches for four yards.

Carlson-Stephenson was 23-for-33 passing for 300 yards and three scores. Lawless had six catches for 110 yards, Bowman had four for 70 yards, Norries caught three for 67 yards and Austin DeJean had four catches for 45 yards.

The Knights were without a pair of contributors, with senior lineman Brian East out for the season after sustaining a neck injury last week and junior receiver-defensive back Ricky Fernandez out but likely back next week.

“You try to put it behind you,” DerCola said of the loss. “We have to find guys who are hungry and go to the ball,” he said of the defense, which has struggled in allowing 243 points in five games. Some players are hesitant, he said, while others are young and inexperienced. “Once they get confidence,” he said, “they’ll play fast.”

Offensively for RFA, the coach said, “we have to try to run as much as we can to keep teams off of us.” And while the run game was better this week, he said, a pair of fumbles prevented the team from being able to keep up on the scoreboard. He said the offensive players are aware they have to play well to hang with each opponent's scoring pace. “They put pressure on themselves. We have a fumble or something, they get down on themselves.”

RFA, DerCola said, has to continue to prepare for each week’s game while building long-term by refining the basics and getting players experience. “We go each week and we try to have a good game plan to compete and battle.” But players have to keep their heads up even if they’re trailing on the scoreboard. “Stay positive and pick out the good things.”

The loss drops RFA to 1-4 on the season. The team has a challenge next week when it hosts 5-0 Christian Brothers Academy at 1 p.m. on Saturday, Oct. 8, at RFA Stadium.

The district honored Raymond Tarkowski before the game by naming the press box for him as thanks for 49 seasons as the voice of RFA football. He is one of the founders of the Touchdown Club and was inducted into the Rome Sports Hall of Fame in 2015.

“I’m humbled and honored,” he said at halftime. “I wanted to thank (then-athletic director) Bill Coughlin for asking me to do a game 49 years ago. And for my son Andrew for doing all the work with the Board of Education,” to get his name on the press box.

The Camden Blue Devils poured it on in a 54-28 win Thursday at Westhill in Class B.

Camden is now 4-0 and sits atop the Class B North East division.

Trey Kimball opened the scoring with a six-yard touchdown run for Camden and quarterback Connor Dean hit Noah Morse for a 54-yard score later in the quarter.

Down 28-14, Camden scored twice late in the second quarter to equalize the score at the break. First it was Morse taking a kick back for an 83-yard TD after a Westhill score then Dean connected with Brian Gonzalez for a 20-yard passing score.

The second half was all Camden. Morse had a one-yard run for the lone TD of the third quarter. Dean had a rushing touchdown of his own from 23 yards to open the fourth quarter scoring. Then Kimball had his second and third TD runs, first from a yard out then nine.

Dean finished 6-of-11 passing for 125 yards, two scores and two interceptions. He had five rushes for 49 and one score.

Morse ran nine times for 54 yards, with one rushing score, one through the air (his lone catch of the game) and the return TD. Kimball had 11 carries for 42 yards and three TDs.

Defensively, Lyle Walker led the Blue Devils with 12.5 tackles and three sacks. Morse had nine tackles and a sack. 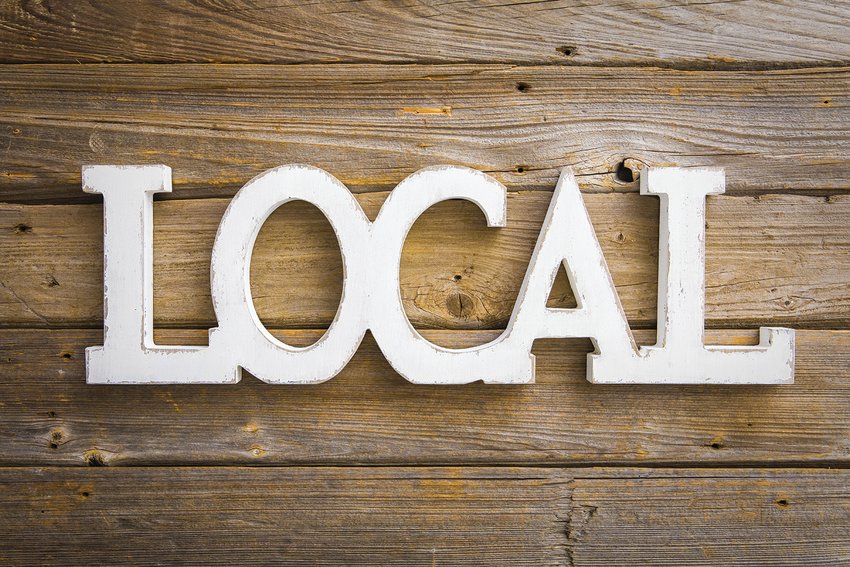