UTICA — Visitors enjoying historic Frederick T. Proctor Park in Utica will soon see duct tape encircling some trees around the park — but there is a method behind this seemingly strange sight. … 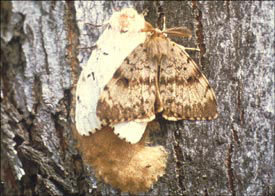 EFFORT UNDER WAY — A spongy moth is shown in this New York State Department of Environmental Conservation. Soon, volunteers — who have been at work over the winter trying to protect trees in Utica’s Frederick T. Proctor Park — will place sticky bands around the trunks of various trees in a bid to thwart the efforts of the voracious insect.
(Photo courtesy NYSDEC)
Posted Wednesday, April 27, 2022 7:10 am

UTICA — Visitors enjoying historic Frederick T. Proctor Park in Utica will soon see duct tape encircling some trees around the park — but there is a method behind this seemingly strange sight.

“Do not be alarmed,” said Olmsted City co-chair and volunteer coordinator Amy Funkhouser. “These sticky bands are part of Phase Two of Olmsted City’s effort to protect our park’s trees from the spongy moth or lymantria dispar, formerly known as the gypsy moth.”

The moth’s presence became evident last summer, when caterpillars that eventually transform into moths ate their way through a large proportion of the leaves in several parts of F.T. Proctor Park and on the Parkway.

Olmsted City, a program of the Landmarks Society of Greater Utica, which is dedicated to restoring Utica’s Olmsted-designed parks system, decided to do what it could to diminish a repetition of last year’s dismaying damage.

During the cold winter months of 2021-22, its volunteers scraped thousands of egg masses from trees in F.T. Proctor Park as part of Phase One of Olmsted City’s multi-year moth eradication effort. Many of these trees were completely defoliated by the spongy moth caterpillars that emerged last spring in great numbers.

The trees mostly recover after one season of feeding spongy moth caterpillars, but after a few successive years of defoliation the trees can suffer and weaken—and eventually they might die from lack of leaves that help them capture the sun’s nourishing rays. Olmsted City believed it was its duty to protect F.T. Proctor’s tree canopy from further devastation.

“Our volunteers came out all winter and disposed of countless thousands of eggs. But there are still many egg masses high up in the tree branches that we can’t reach,” said Funkhouser. “These bands should help us catch those caterpillars after they hatch.”

Now, as part of Phase Two, Olmsted City’s volunteers will be installing barrier bands around selected trees. These bands of duct tape protect the trees from a sticky substance that is applied over the tape that will help trap caterpillars that survived the winter.

The sticky bands are most effective in spring when young emerging caterpillars spin “parachutes” and “balloon” to a new food source often landing on the ground.

They are then caught in the sticky substance when trying to ascend the tree. These bands can also be effective in preventing female moths from crawling up trees to lay their eggs in the summer because the flightless females get hung up in the sticky substance. Preferred host plants include oak, maple, birch, elm, ash, apple, crabapple, cherry and blueberry, and Olmsted City’s volunteers will be focusing on these trees, as well as specimen trees in scenic locations around FT Proctor Park.

“These moth egg masses aren’t just found in the park,” remarked Olmsted City Chair, Phil Bean. “They have also been spotted on trees in neighborhoods adjacent to the Parkway, and we urge Uticans to look for and remove them. We need to do what we can to drive them from this area and to reduce the damage they can do to this community’s tree canopy.”

Doing so is easy, as it involves using a pocketknife or some other flat sharp object like a putty knife to very gently scrape the masses—which are flat, beige, and usually larger than a quarter, often oblong — off the tree bark and into a container with soapy water.

“If we all do our part, eventually the population of these moths will decrease and they will begin to migrate elsewhere,” said Funkhouser.

There are still 3 to 4 more weeks left this season in the Utica area to remove egg masses before the caterpillars start hatching and begin destroying the leaves on trees.

Those who are interested in volunteering to help Olmsted City with this and other work in the parks, or want further information regarding spongy moths, email to olmstedcity@gmail.com