For the first time come November, New York State residents won’t have to wait until Election Day to vote. Instead, they’ll be able to cast ballots at special polling places at any time in the 10 … 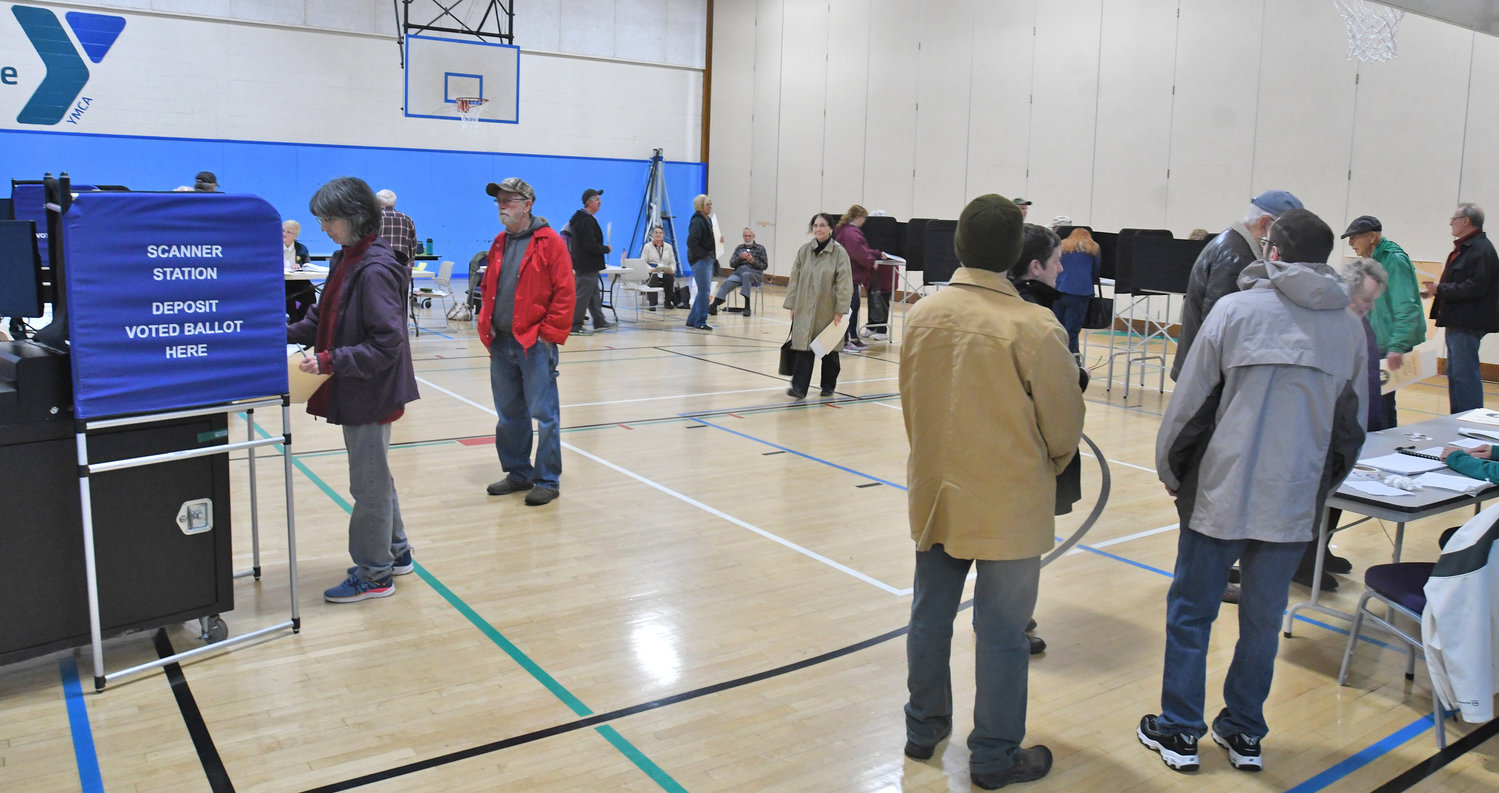 For the first time come November, New York State residents won’t have to wait until Election Day to vote. Instead, they’ll be able to cast ballots at special polling places at any time in the 10 days before the election, weekends included.

The state Legislature took care of that early in its session this year, passing a package of election-reform bills in January, and Gov. Andrew Cuomo signed them into law.

But the details of how to actually get ballots before voters are falling to the state Board of Elections and even more so to local boards including in Oneida County.

“It’s do-able. It’s just going to be a lot to do to make it happen,” said Democratic Elections Commissioner Carolann Cardone.

Cardone and her Republican counterpart, Rose Marie Grimaldi, discussed this week how they plan to carry out early voting. They said that other reforms such as the combined federal and state primary in June, automatic in-state transfer of registration for residents who move, and the advanced registration of 16- and 17-year-olds will not cause major changes in how they operate.

It’s early voting that they’re working through. Because many details have not yet been set, they haven’t been able to make a cost estimate. They hope, as do other local elections boards and election-reform groups, that money to help counties pay for the added costs is included in the fiscal 2020 state budget due April 1. If not, they will have to ask the county Board of Legislators for added funds this year.

The early voting requirement takes effect for this year’s general elections in November, then will also be required for primaries starting in 2020, when state and federal offices, including the presidency, will be on the ballots.

The law stipulates that counties have at least one early voting polling place for each 50,000 registered voters. For Oneida County, that means at least two, as the county has about 128,000 registered voters. Grimaldi and Cardone said they are considering three general locations: Likely one at the Board of Elections office in Utica’s Union Station, one in Rome for central and northern portions of the county, and one in New Hartford for the county’s southern side.

Early-voting polling places have to be open at least eight hours on weekdays and five hours on Saturdays and Sundays. Sites have to accommodate a polling place for 10 straight days including weekends. At least one polling place for early voting has to be open until 8 p.m. at least two week days in each week. Grimaldi and Cardone said that will probably mean hours into the evenings Tuesdays and Thursdays.

Meanwhile, poll personnel will have to be paid. Now, poll site coordinators are paid $200 for Election Day and $170 for primaries; poll inspectors are paid $170 and $150, respectively. At least two are required at each site.

It’s likely the duty will be rotated among regular poll workers rather than the same people staff the polls the entire 10 days, the commissioners said.

The law says any voter may vote an any polling place for early voting unless it is impractical to provide all the election district ballots or doing so interferes with making sure no one votes twice. Whether to divide into assigned polling places for early voting is up to the local board of elections; if the board doesn’t vote for it, the default is everybody can vote anywhere.

Unless the local board of elections decides to go with assigned polling places, approach, voters must be able to vote at any of the sites, not just his or her regular assigned polling place. That’s especially significant in Oneida County this year, as 23 county legislative seats are to be filled in November  – and with them, 23 different ballots will be needed.

The hope is to print ballots as needed and dictated by where voters who come early live.

“(If you live in ) Camden and you got to Rome to do the early voting you have to have a Camden ballot there, because the legislators are running this year and there’s 23 different districts that are broken up,” Cardone said. “It’s gonna be hard to say you know how to give that person the accurate ballot.”

Similarly, unless voters are assigned to a particular site, all early-voting sites need to have records of the whole county when voters arrive. The records may be needed in any case if people from other districts go to a different early-voting site, Cardone noted.

“If we do ... a southern district, northern district, and then central Oneida County, you’re still going to need the county file in case somebody goes to one of those locations. So the easiest way to do it would be the electronic poll books, and I’m sure other counties are definitely thinking the same thing.”

Electronic poll books, the term given to a system of computerized voter information, check-in, verification, signature-taking and recording, has not been specifically authorized by the state Legislature. Bills doing so are in each chamber. Using them will come with costs related to software and training, Cardone and Grimaldi noted.

New York is now the 38th state to allow some form of early voting.

As for the consolidated primaries, Grimaldi and Cardone say it isn’t a huge change for elections personnel, though it may help both candidates and voters. New York had remained the only state with September primaries for state offices while holding nominating contests for Congress in June. In 2020, there will be three elections instead of four, they pointed out: the presidential nominating primaries in April, the June primaries for everything else, then the November general election. That will save the county, Cardone pointed out.

“Instead of having four primaries, four elections, we’re only going to have three,” she said. “I think it also gives the candidates a longer time to make sure that they’re on the November ballot after the June primary …  to get out there to the people so the people can make a better choice.”

In other reforms, voters who move within New York will have their registrations automatically transferred by the state Board of Elections as long as they have filled out a change-of-address form with the U.S. Postal Service.

Sixteen- and 17-year-olds will be expressly allowed to register to vote and automatically become eligible when they turn 18.

Bills to allow same-day registration by eliminating the 10-day period before voting and to allow absentee voting by mail without a specific excuse – in effect, mail-in voting — were passed but the changes require amending the state Constitution. That requires passage by the Legislature in two consecutive sessions then voter approval in a statewide referendum.

Rome-area lawmakers were split the reforms.Assemblywoman Marianne Buttenschon, D-119th District, voted for all the measures. State Sen. Joe Griffo, R-47th of Rome, voted against the early-voting bill, primaries, against teen pre-registration and against same-day registration, according to the Senate’s legislative tracking system.

Griffo said in an interview early voting was pushed through without consulting those who have to carry it out, mainly local elections commissioners and boards. He supports no-excuses absentee voting, or in effect vote by mail and introduced a bill on it in the Legislature’s previous session. But he said other reforms were rushed without regard to unfunded mandates on localities and security concerns by downstate Democrats eager to announce they’d reformed elections, and without regard to upstate concerns.

“There’s so many things that have not been well thought out here because they want to ensure they implement these measures, and it makes you question what is the true motivation behind the measures,” Griffo said.

Republican lawmakers supported consolidating primaries but sought an August date because June forces candidates seeking to get on primary ballots to collect signatures as early as February, Griffo said. “Their counter-argument was it’s going to be hot. Hot you can deal with. You can’t navigate through a blizzard.”

Buttenschon said opening voting for a 10-day period has added costs and the Assembly budget contains funds for local boards of elections.

“ This new legislation was brought forward to ensure that all who want to exercise
their right to vote will have that opportunity,” Buttenschon said in a statement. “This legislation is from a review of other models that have been used, and it will enhance voting opportunities for all.”

The New York State Assembly’s One-House Budget has requested funding for
local boards of elections, so that these new policies can be supported
financially.Opening polling for a 10-day period certainly has financial
challenges, and we are aware of that.

Election reform advocates, including the group Let NY Vote, seek other measures. Let NY Vote is promoting easing ballot-design requirements that they say make New York ballots confusing, restoration of voting rights for parolees, automatic registration when dealing with any government agency, and flexible change of party registration. Now, one general election must occur before a person’s change of party or entry into a party from non-affiliated allows participation in primaries. The effect is that to be eligible to take part in next year’s presidential primaries, a voter would have had to have changed registration before this coming November’s election, and for any state primaries this year, before last November’s election.

This year’s primary election day is June 25. The general election is Nov. 5.