Dozens of guns turned in during attorney general’s buyback event 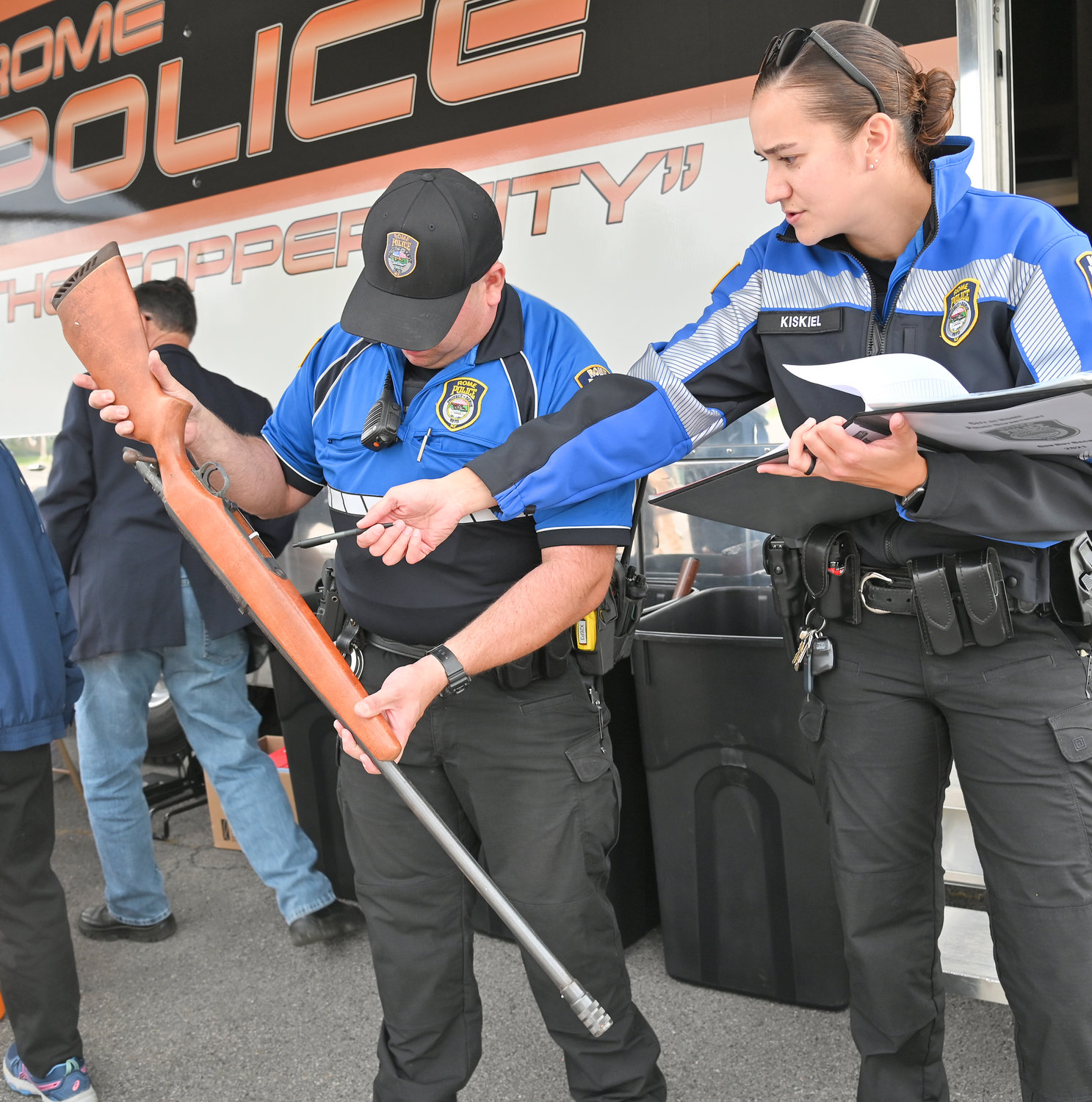 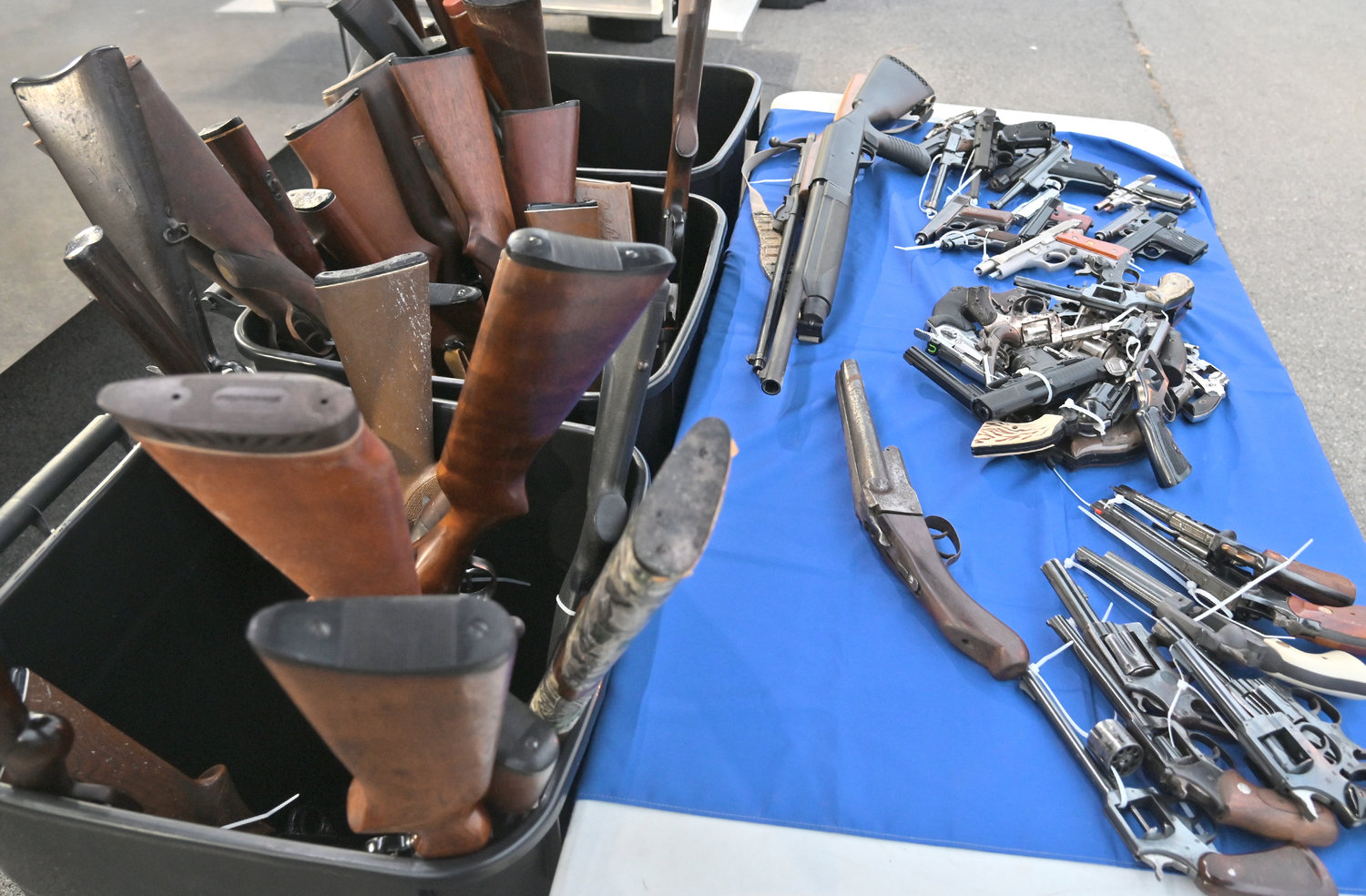 TAKEN BACK — There was a total of 84 guns, includuing 20 non-working weapons; 34 long guns and 30 handguns. In exchange for the weapons, officials gave out $7,550 in prepaid debit cards.
(Sentinel photo by John Clifford) 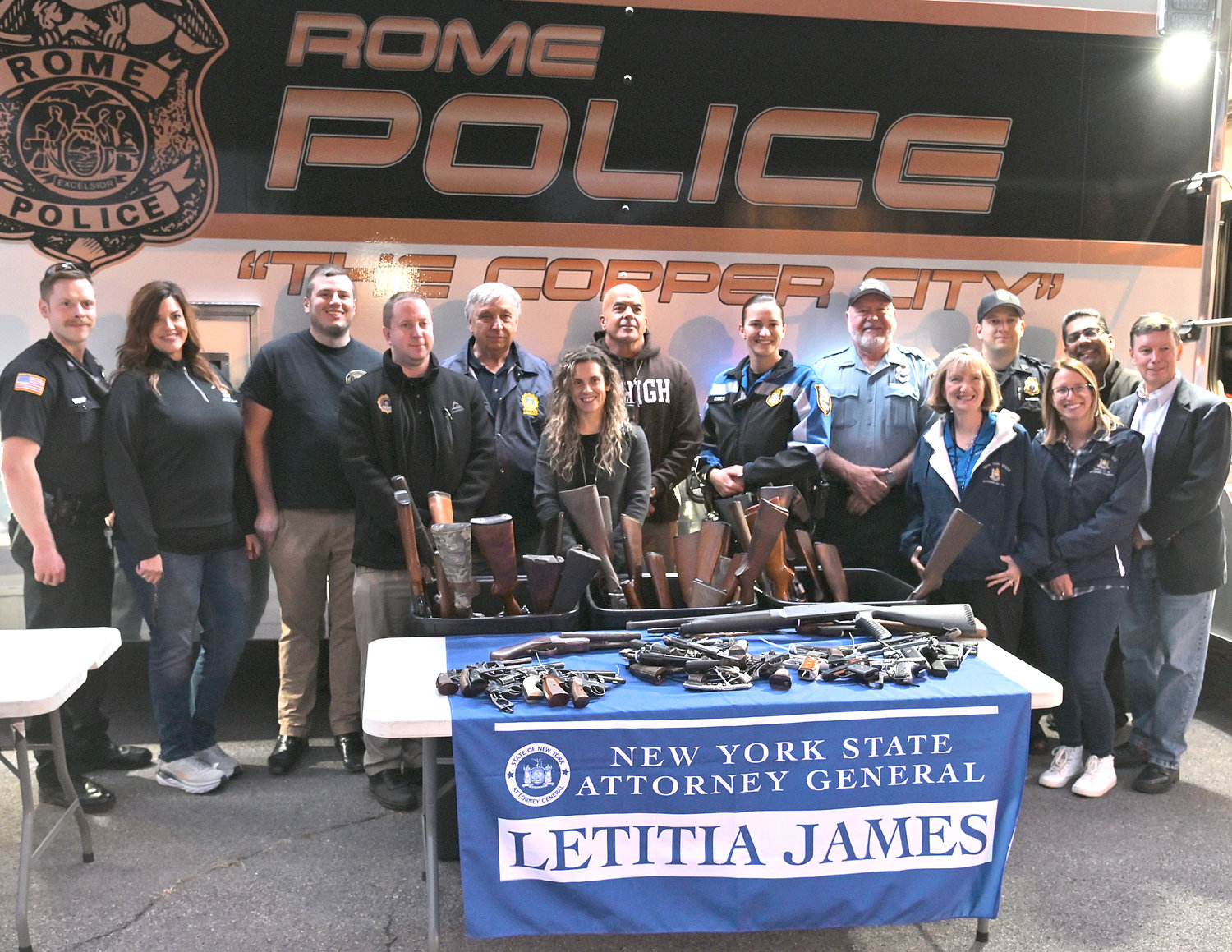 Personal from the NYS Attorney Generals office and Rome Police Department pose with the 84 firearms handed in Wednesday afternoon and evening. There was a total of 84 guns: 20- non-working, 34- long guns and 30- handguns. They gave out $7,550 of money cards.
(Sentinel photo by John Clifford) 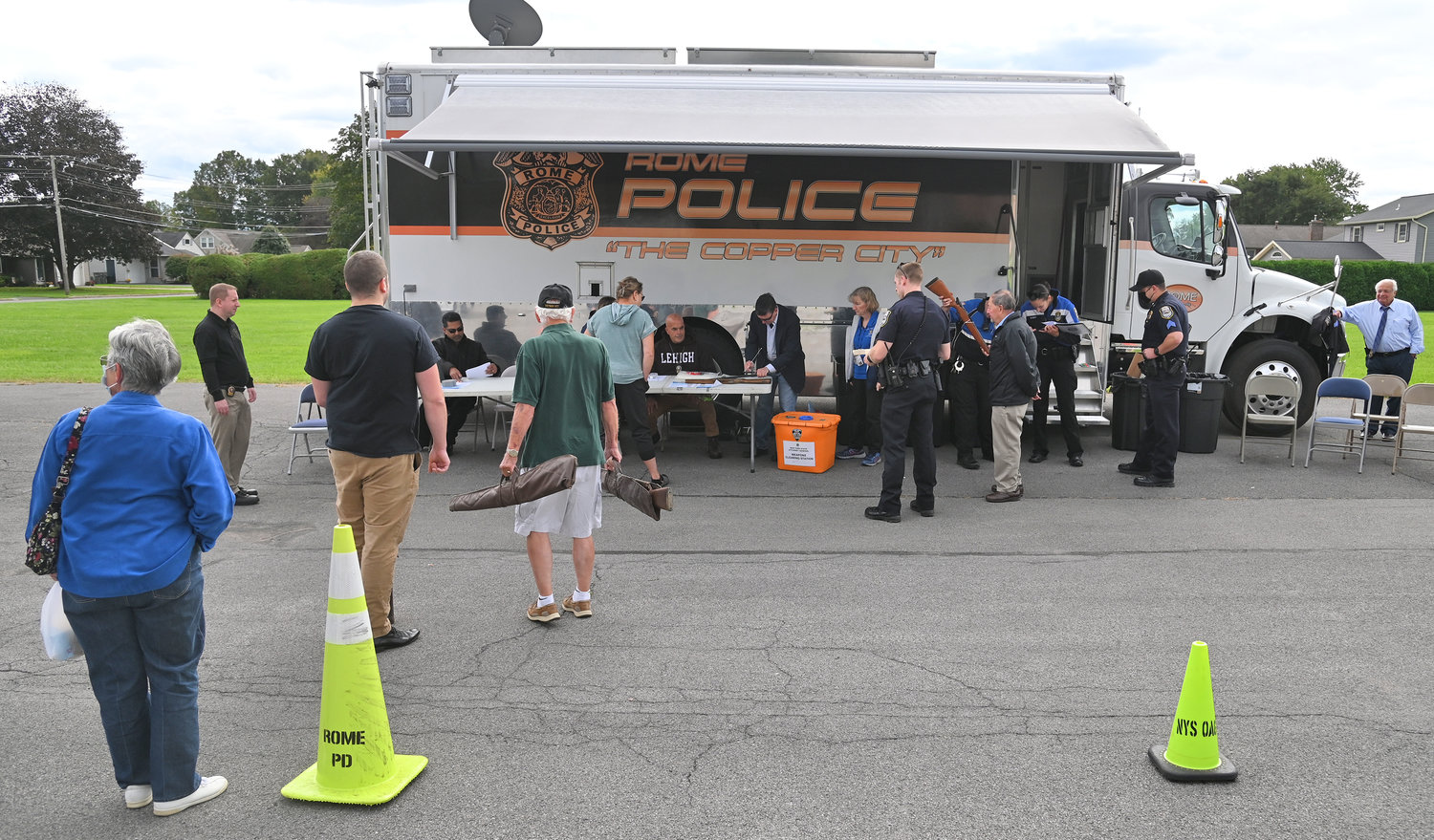 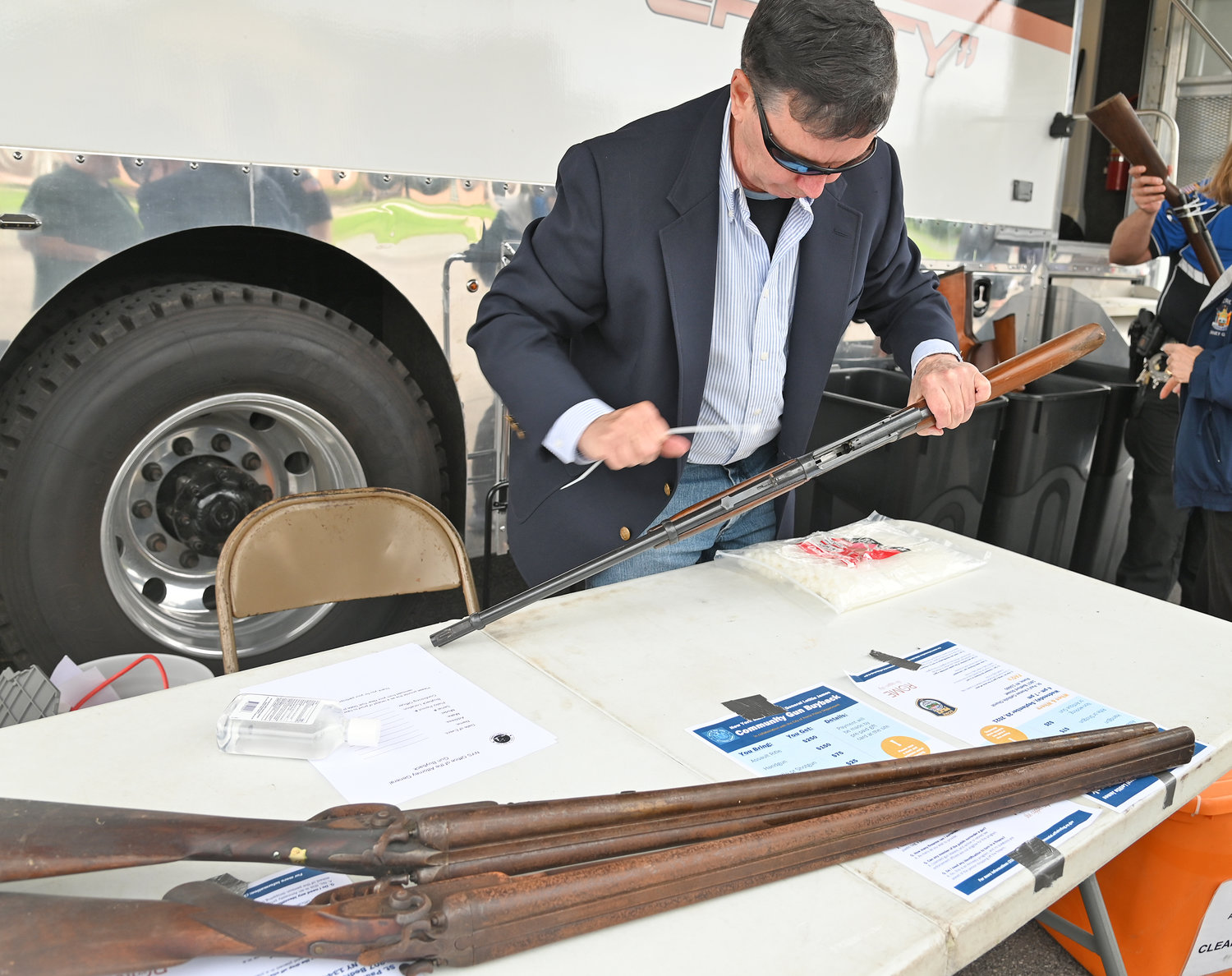 John Wood an investigator with NYS Attorney Generals office looks over a rifle that was brought to the gun buy back Wednesday afternoon.
(Sentinel photo by John Clifford) 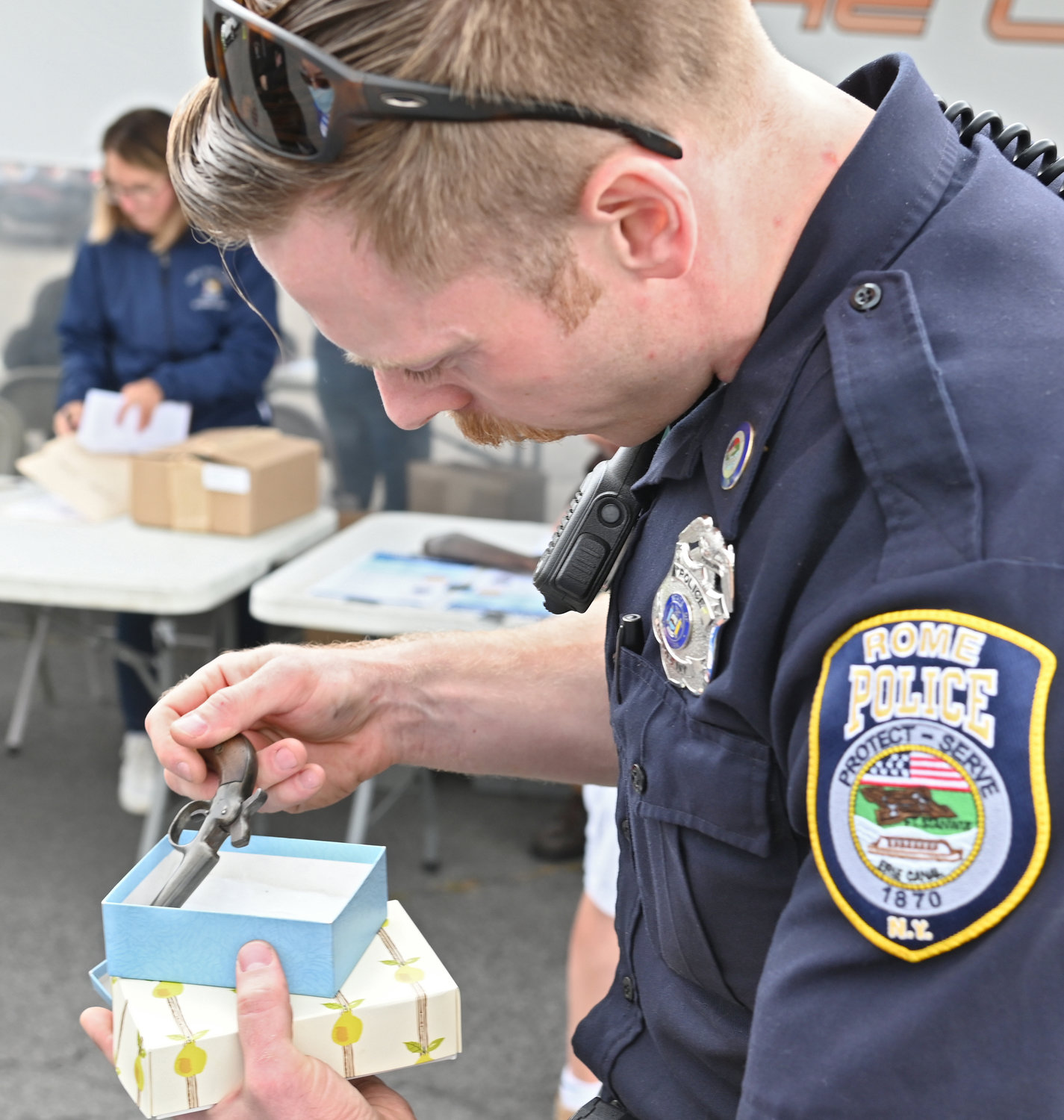 Rome PD Officer Chris Herring looks over a little .22 pistol that was brought to the gun buy back Wednesday afternoon.
(Sentinel photo by John Clifford)

New York Attorney General Letitia James announced on Thursday that 84 firearms were turned in to law enforcement at a gun buyback event at St. Paul’s Church on Cypress Street.

The event, hosted by the attorney general’s office and the Rome Police Department, accepted — with no questions asked — working and non-working, unloaded firearms in exchange for compensation on site.

To date, James said in the announcement that including the Rome event, her office has helped to take more than 2,300 firearms out of communities through gun buyback events and other efforts since taking office in 2019.

“Gun buyback programs are essential to protecting New Yorkers and preventing dangerous guns from ending up in the wrong hands,” James said. “The threat of gun violence has loomed over our communities for far too long, and it is imperative that we take every step possible to eradicate this violence. My office will continue to use every tool at our disposal to keep our neighborhoods safe, and we thank the Rome Police Department for their invaluable support and partnership in this effort.”

“We are grateful for the opportunity to get guns off the street, preventing them from falling into the wrong hands, and keeping the community safe. We are very supportive of any proactive approach to put an end to and prevent gun violence,” the unit’s statement added.

The community gun buyback resulted in the collection of 84 guns, including 30 handguns, 34 shotguns and rifles, and 20 non-working guns. Since 2013, OAG has hosted gun buyback events throughout New York state and has successfully collected more than 4,300 firearms.

In exchange for the firearms, OAG offered monetary compensation, in the form of prepaid gift cards, when an unloaded gun was received and secured by an officer on site.

“The city of Rome and the Rome Police Department are very pleased to partner with the New York Attorney General’s Office at this community gun buyback program,” said Rome Mayor Jacqueline M. Izzo.

“Gun buyback programs are an important tool in reducing gun violence,” said State Assemblymember Marianne Buttenschon, D-119, Marcy. “They allow unwanted and unused firearms to be taken off the streets, ensuring they will not fall into the wrong hands or be used to harm anyone in our community. I thank Attorney General James and local law enforcement for partnering and offering this program.”