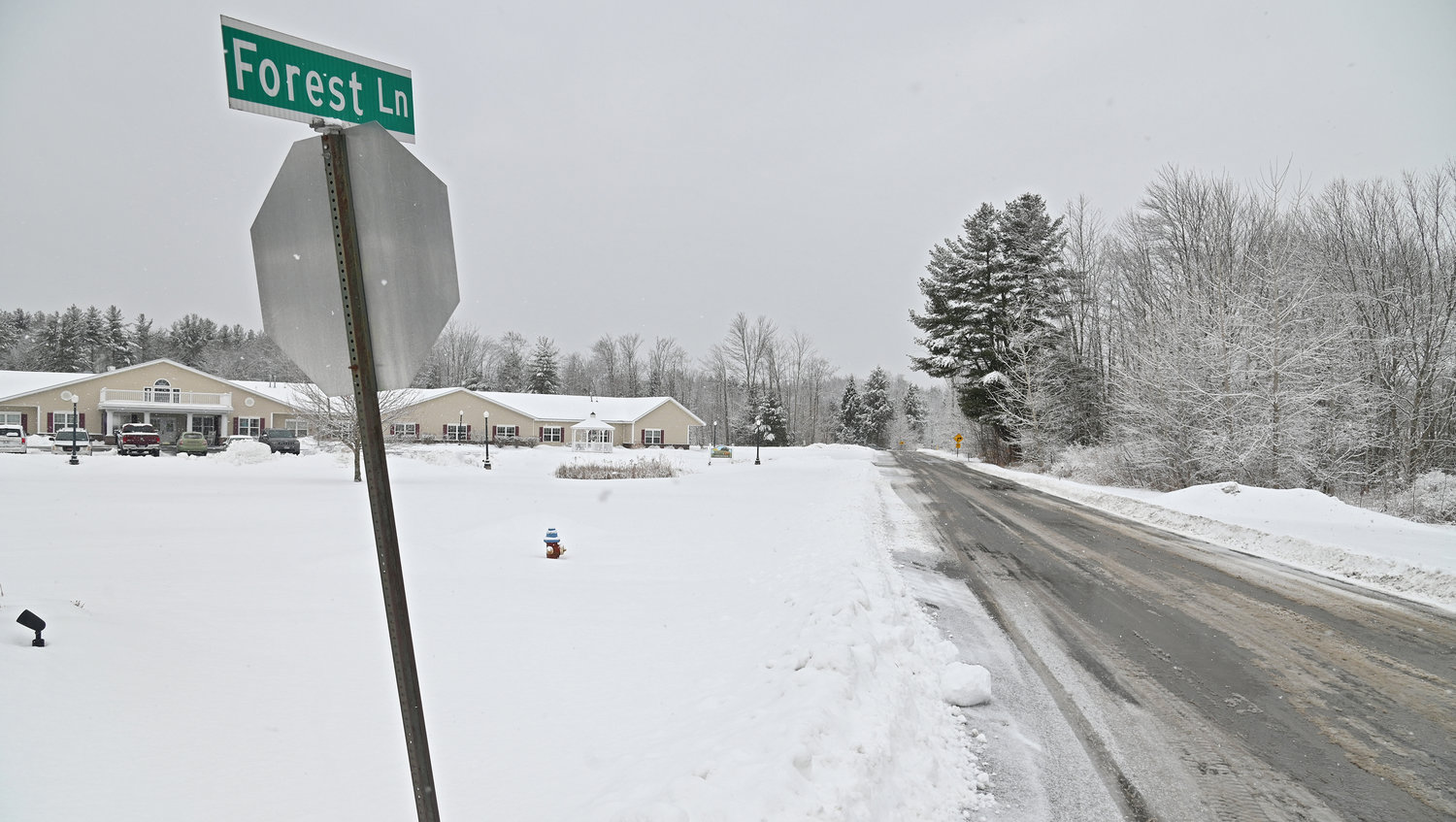 BUFFER ZONE — Neighbors on and near Forest Lane, with The Terrace at Woodland assisted living facility in the background, requested among several issues that Seaboard Solar, which is proposing a 215-lot major subdivision to be built nearby, include natural buffers along the borders of their development for privacy and to abate noise, especially for elderly residents.
(Sentinel photo by John Clifford)

NEIGHBORS IN PROTEST — This shows the intersection of Ironwood Drive and Forest Lane in Rome, which lies near a proposed 215-lot major subdivision. Neighbors asked for guarantees from developers Seaboard Solar, of Connecticut, during the city planning board meeting Tuesday, to mitigate stormwater management issues in the area and complete the scope of the planned 8-section, 10-year construction project.
(Sentinel photo by John Clifford)
Previous Next
Posted Thursday, March 3, 2022 6:30 am
Nicole A. Hawley
Staff writer
email / twitter

About 25 neighbors of a 215-lot subdivision off Turin Road, proposed by Seaboard Solar, LLC, expressed concerns about the project — the majority citing existing drainage issues, with some worried about traffic, noise and construction disrupting their quiet neighborhood — during Tuesday’s regular city Planning Board meeting held in Council Chambers of City Hall.

Seaboard Solar, of Danbury, Conn., parent company of Turin Road Solar, LLC of New Milford, Conn., is the same company whose 31-acre solar array for the same property was overwhelming rejected by the community and Zoning Board of Appeals last summer. The issue prompted City Council members to draft and pass legislation establishing a 6-month moratorium on the establishment and construction of solar arrays within the city.

Last month, requests by Seaboard Solar for a Site Environmental Quality Review and preliminary plat review for the 215-lot subdivision were tabled to the March meeting. Following the public speaking portion of the meeting Tuesday, Planning Board members voted unanimously to table a negative declaration on the SEQR for the project, but passed the preliminary plat review.

While local residents were asked to refrain from speaking against the project seeing that the subdivision proposal was within legal, allowed uses for the property, most speakers expressed opposition due to concerns for stormwater management, which is already a major issue in the area without any development.

Meanwhile Steven Wilson, of Polar Engineering, spoke on behalf of Seaboard, explaining to board members that their project would be developed in eight separate areas over the course of 10 years depending on market demand. Wilson said they also mapped out stormwater management and runoff, as well as drainage issues on the site and in the neighborhood.

“There are stormwater management areas located within each development area, and our goal is a robust one where post development runoff would equal or be even less than pre-development runoff associated with the site,” said Wilson. “We’re looking to improve things in the area. And we would design the system within DEC (state Department of Environmental Conservation) guidelines, which are very strict, and we will make sure we’re all compliant in conjunction with the valuation of soil and the infiltration system.”

Asked if Seaboard would go before the Planning Board for each development separately or all eight at once, Real Estate Development and Project Manager Kevin O’Neill said “it’s not likely” Seaboard would come before the board for the final plats for each subdivision area “all at the same time.”

As for the design of the stormwater management system, “A third party can be selected by the city to review the stormwater design if that would help the public and the board feel more comfortable,” said O’Neill.

Upon review of the topography of the area, Wilson mentioned there are a series of sub watersheds, with water flows moving in different directions. He said plans now are to have about a dozen stormwater management areas scattered throughout the site, and that Seaboard would first build the stormwater management system before they “would put one foundation” of a home “into the ground.”

Before the public comment portion, Planning Board Chairman Mark Esposito stated to those in attendance, “This is a permitted use within the zoning and we would encourage you to use your time for things” Seaboard “can do to mitigate your concerns instead of stopping the project. We don’t have a basis to stop the project as the Planning Board — we’re here to evaluate the site plan and subdivision of the property, things of that nature — it’s to work with the petitioner to come up with a design to meet city code.”

Rome Attorney J. Kevin O’Shea, of Ironwood Drive, said he was speaking as a concerned citizen and on behalf of his neighbors. He described his neighborhood as peaceful and quiet, with the majority of residents being retirees who chose to live there “because it’s peaceful.” He said there are about 90 homes in the neighborhood, with 37 bordering the property of the proposed development.

“This scares us, why? Because it’s changing our daily, ordinary lives,” said O’Shea. “Our proposals we hope you’ll incorporate into your decision” as a board.

O’Shea then presented eight recommendations to the developers to consider during construction of the project. They were: Establish a 200-foot natural buffer between the bordering residential properties for privacy and to act as a barrier for noise and stormwater; hire an independent, certified water expert to certify the project will not increase stormwater runoff seeing there are plans to cut down 105 acres of trees for the subdivision; get the state DEC and the Army Corps of Engineers involved in the project; don’t extend Ironwood Drive for access which will result in traffic issues and use Forest Lane as an access point for the subdivision onto Turin Road; that the number of proposed homes (lots) be less than 215; reduce the 10-year time line for construction; don’t allow construction traffic through the neighborhood; and reduce active construction days from seven to five, with hours between 8 a.m. to 5 p.m.

“We come to you in good faith with a solution, and the fact that it’s a proposed use doesn’t mean you can’t mitigate and regulate the actions of the developer,” O’Shea concluded.

Dennis Brown, of Lorena Road, said the project would “disrupt our way of life...What about nature — the turtles, snakes, deer, owls — they all have homes in the woods and you’ll tear up over 200 acres? That’s a lot. What about their homes; does anyone care about nature?”

Some residents complained that within the last three years or longer, basement flooding in the neighborhood has been an on-going issue, with homeowners operating more than one sub-pump and still experiencing water problems. Another area resident, who said he built roads and highways for a living for 38 years, said the local streets were not built to withstand construction traffic consisting of large logging trucks, concrete trucks and other heavy machinery, and asked for Seaboard to look at a better way of accessing the property.

John Capponi, 8364 Forest Lane, said he built his raised ranch in 1992 and water will go right through the cement blocks of his foundation.

“The yard is totally soaked in the middle of the summer. There’s no way for the water to drain out,” said Capponi. “We’re sitting on clay and it just won’t drain. The city came in and put in an 80 foot drainage pipe in the property and it doesn’t do anything...This subdivision will make it worse. I don’t know how they can dig (for) a cellar if I can’t even have a half cellar in our place” not filled with water.

A resident of Lorena Road presented video on his cellphone showing running water on his property and asked what the city would do to rectify his and his neighbors’ situations.

An Ironwood Drive resident said his street was “not the place” to have a potential 400 cars from the proposed development “trying to get out on Turin Road” and that it should remain a dead end. It was also suggested that there should be some type of fencing or barrier of trees for noise abatement and so residents of the development don’t have access to their back yards.

Theresa Gualtieri, of Ironwood Drive, said she was “against the project” because of its size, the noise created by construction and because the land is too wet. Gualtieri said she has had to mow her lawn in boots because of the mud and has experienced problems with sink holes on her property.

“I’m not against Rome having new developments — I just want to make sure that when they do, they do their due diligence because Ironwood is a very small area and neighborhood,” she said. “I ask you to consider a buffer so we can have some privacy between properties...Please don’t forget about the people who are already here.”

Sherry Anne, a singer and author from Utica who said she moved to Kolton Drive in August so she and her mother could live in a quiet neighborhood, said when moving to her new home she had an elevated level of radon and wondered if additional digging for the subdivision would increase levels further in the area.

Jim Sullivan, of 6389 Ironwood Drive, asked, “Why is a solar company building houses?”

“I worry they’ll get involved in that (development) and in 3-4 years they say they’re dropping it because they’re not getting anywhere with it,” he said. “What guarantee do we have that they’ll continue and not leave a dump at the end of Ironwood Drive and around Forest Lane? We need protection for something like this.”

Fifth Ward Councilor and Cedarbrook Drive resident Frank R. Anderson thanked neighbors for speaking and noticed representatives of Seaboard “took good notes and will continue to take notes and work to do what they said last month about plans to make the area even better than prior to construction.”

“On everyone’s mind is stormwater management, but one question, and I had hoped the board would filter through this, is the logging that will be done and the planning of that, because it will lead to stormwater and draining issues,” Anderson said.

And because initial construction would not begin until April 2023 for the first phase according to the developer’s plans, Anderson requested there be “some commitment — is there a schedule? I’d like a commitment regarding timing, because timing is very important here.”

Esposito thanked the crowd for their feedback and positive comments, and Vice-chairman Joseph Calandra asked Assistant Corporation Counsel James S. Rizzo about establishing an easement on city-owned property for construction trucks to have access to the property, and Rizzo said there’s nothing that would “prevent that outright.”

As for the possibility of Seaboard walking away from the project once construction begins, “which is within their right,” according to Esposito, Deputy Director of Community and Economic Development Matthew Andrews said there can be a performance bond on the project.

Esposito also said while the city cannot demand the number of lots that make up the project, he did ask Seaboard representatives take the public’s concerns into account and consider reducing the number of homes and having larger lots.

Calandra requested that instead of 10 years of infrastructure work, that Seaboard include in their plans the building of roads, water retention areas, concrete sidewalks, etc., in the first phase before constructing the houses.

Calandra then made a motion to table the SEQR, requesting more information on stormwater management plans, which was unanimously approved. As for the preliminary plat review, Calandra said Seaboard “met all the criteria” and made a motion to approve the preliminary plat on the condition that developers have a credentialed engineer with experience involving similar projects of this size for “water relocation” management.

“Get a third party before you come back” before the board, Calandra said. The motion was also unanimously approved.