Double dose of good news 2,000 jobs and $2B investment predicted in pair of projects 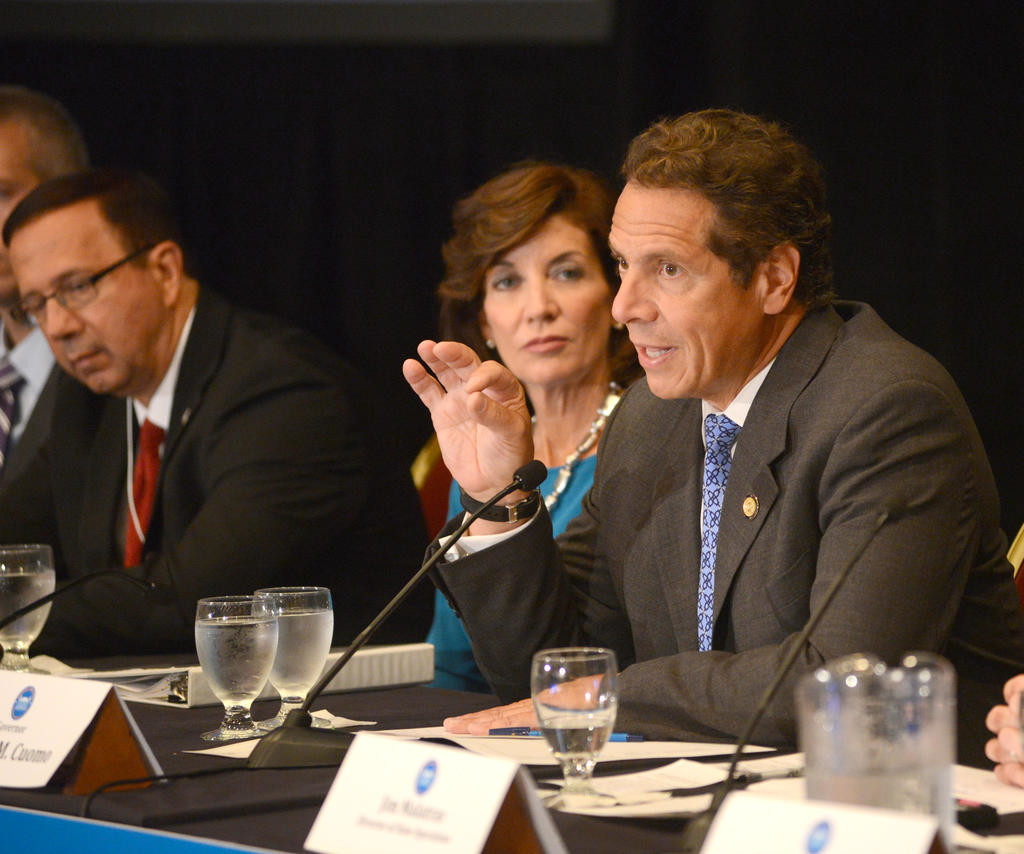 HIGH-TECH PROJECTS — Gov. Andrew Cuomo kicks off his Capital for a Day at the Raddison Hotel in Utica this morning. The governor and his staff were touring the region today, meeting with residents and local leaders as well as announcing a pair of high-tech projects for the region which are anticipated to bring some 2,000 jobs to the area. (Sentinel photo by John Clifford)
Posted Thursday, August 20, 2015 12:20 pm

MARCY — The Mohawk Valley received a welcomed double dose of high-tech good news today with 2,000 jobs and some $2 billion in private investment projected in a pair of projects for the region.

Speaking at SUNY Polytechnic Institute this morning, Gov. Andrew M. Cuomo said an Austrian company — AMS AG — has picked the Marcy Nanocenter for a computer chip plant — an announcement that was more than 15 years in the making. He also announced that General Electric will be the first major tenant in the Computer Chip Commercialization Center, or Quad-C, that’s nearing completion on the SUNY Poly campus.

AMS AG said at the end of July it had signed an agreement with the state to operate a chip fabrication plant at an unidentified New York location. Much speculation and optimism immediately followed that Marcy would be the company’s choice. Mohawk Valley EDGE has been developing the site since the let 1990s. All the work paid dividends today with the landing of AMS and its 360,000-square foot wafer fabrication facility.

Construction of the AMS plant is scheduled to begin in spring 2016 at the 450-acre Marcy Nanocenter site.  Capital purchases, operating expenses and other investments in the facility over the first 20 years are estimated at more than $2 billion.  AMS will create and retain more than 700 full time jobs and anticipates the creation of at least 500 additional support jobs from contractors, subcontractors, suppliers, and partners necessary to establish the full ecosystem necessary to enable advanced manufacturing operations.

The company wants to have volume production underway by early 2018. Jobs estimates predict an additional 500 jobs when the plant is fully operational. AMS will lease the factory and manufacture chips for 20 years. It makes chips used in sensors for mobile devices and other products.

AMS Chief Operating Officer Dr. Thomas Stockmeier said, “Building a new wafer fab will help us achieve our growth plans and meet the increasing demand for our advanced manufacturing nodes. Our decision to locate the facility in New York was motivated by the highly-skilled workforce, the proximity to esteemed education and research institutions, and the favorable business environment provided by Governor Cuomo and all the public and private partners we are working with on this important project.”

Additionally, AMS will collaborate with FSMC and SUNY Poly on a joint development program to support complimentary research, commercialization and workforce training opportunities at SUNY Poly facilities throughout New York State, expanding and enhancing the ever-growing high tech cluster that is centered in Albany at SUNY Poly CNSE.

The GE Global Research and SUNY Poly developing Power Electronics packaging facility, is expected to create at least 920 jobs as Quad-C’s first major tenant. At least 470 jobs are expected to be created in the Mohawk Valley in the next five years from SUNY Poly, GE and affiliated corporations and another 350 in the subsequent five years.

GE Global Research and SUNY Poly will develop a Power Electronics packaging facility at Quad-C that will advance New York’s leadership in next-generation semiconductor research, development, and commercial fabrication to meet the global demand for smaller, faster, and more efficient devices, the governor said. This development will expand the scope of the Nano Utica initiative from computer chip commercialization into power electronics applications for industrial products such as wind turbines, utility-scale solar inverters, data centers and hybrid cars.  GE’s silicon carbide technology is a new material platform upon which the next generation of power devices will be built, enabling higher power in smaller, more efficient packages.

GE Senior Vice President and Chief Technology Officer Mark Little said, “Together with New York State and SUNY Polytechnic Institute in Albany, and now Utica, we are creating a Silicon Carbide Corridor that will be the epicenter of the next revolution in power.  In Utica, it will expand the focus from computer chip commercialization to creating the first U.S. based Power Electronics Manufacturing Center with GE’s silicon carbide technology. We want to commend Governor Cuomo and Dr. Kaloyeros for providing the spark that will attract many other great companies and jobs for the Mohawk Valley.”

Advanced packaging technologies are vital in the development of faster and more powerful computer chips, as well as silicon carbide chips for power electronics applications. They refer to the conductors that connect the circuits, provide power, and discharge heat to keep the chips functioning properly. The packaging facility at QUAD C will lead to commercial breakthroughs in an array of applications ranging from defense, super-computing, tablets, cell phones, and a myriad of power electronics applications.

The packaging facility is a critical component of the New York Power Electronics Manufacturing Consortium, the governor’s $500 million public-private semiconductor research partnership that includes over 100 companies. Based at the SUNY Poly Megaplex in Albany with lead partners including GE and IBM, the Consortium is driving coordinated materials research and job creation across the Upstate corridor.

With about 450 acres, the site has been planned for three chip plants and affiliated facilities. Jobs will come not just in the facilities, but also externally.

Backers of the Marcy Nanocenter say the region will benefit from new jobs and companies coming into the area and existing ones expanding to support a chip fab.

The Quad-C was announced in 2009. The facility will include cleanroom space and will host public-private partnerships as part of Cuomo’s $1.5 billion Nano Utica initiative. The project has undergone revisions and expansions since it began.

The expansion of QUAD C includes state-of-the-art cleanrooms, laboratories, hands-on education and workforce training facilities, and integrated offices encompassing 253,000 square feet. The cleanroom will be the first-of-its-kind in the nation: a 56,000 square-foot cleanroom stacked on two levels that is now five times larger than initial plans.

Quad-C was originally projected to create as many as 1,500 high-tech jobs over time. With the ramped up version, a higher final number is anticipated. A year ago, more than 1,700 people turned out for a job fair.

The original price tag to build Quad C was $125 million. Now, it is heading toward $300 million.

In accordance with the governor’s innovation-driven economic development model, no public funds will be given to private companies. New York will invest $250 million at Quad-C and the Marcy Nanocenter to support critical equipment and infrastructure improvements at both locations. The state will own and manage these facilities through SUNY Poly and such state investment will catalyze the Mohawk Valley’s high-tech economic ecosystem, attracting additional nanotechnology jobs and supply chain companies to support and contribute to Nano Utica initiative.

‘Capital for a Day’

Today’s announcements were part of the Democratic governor and his cabinet traveling to Utica for a day of meetings and activities designed to give state officials a better sense of the Mohawk Valley’s challenges and opportunities. In addition, his cabinet members were scheduled to meet with local residents and regional leaders to get a better sense of the community.

It’s part of a series of such visits by Cuomo. Rochester was named the state’s “Capital for a Day” earlier this year.

According to a schedule released by the governor’s office, high level state officials planned nearly two dozen visits to local sites, events and organizations to meet with residents and local leaders.