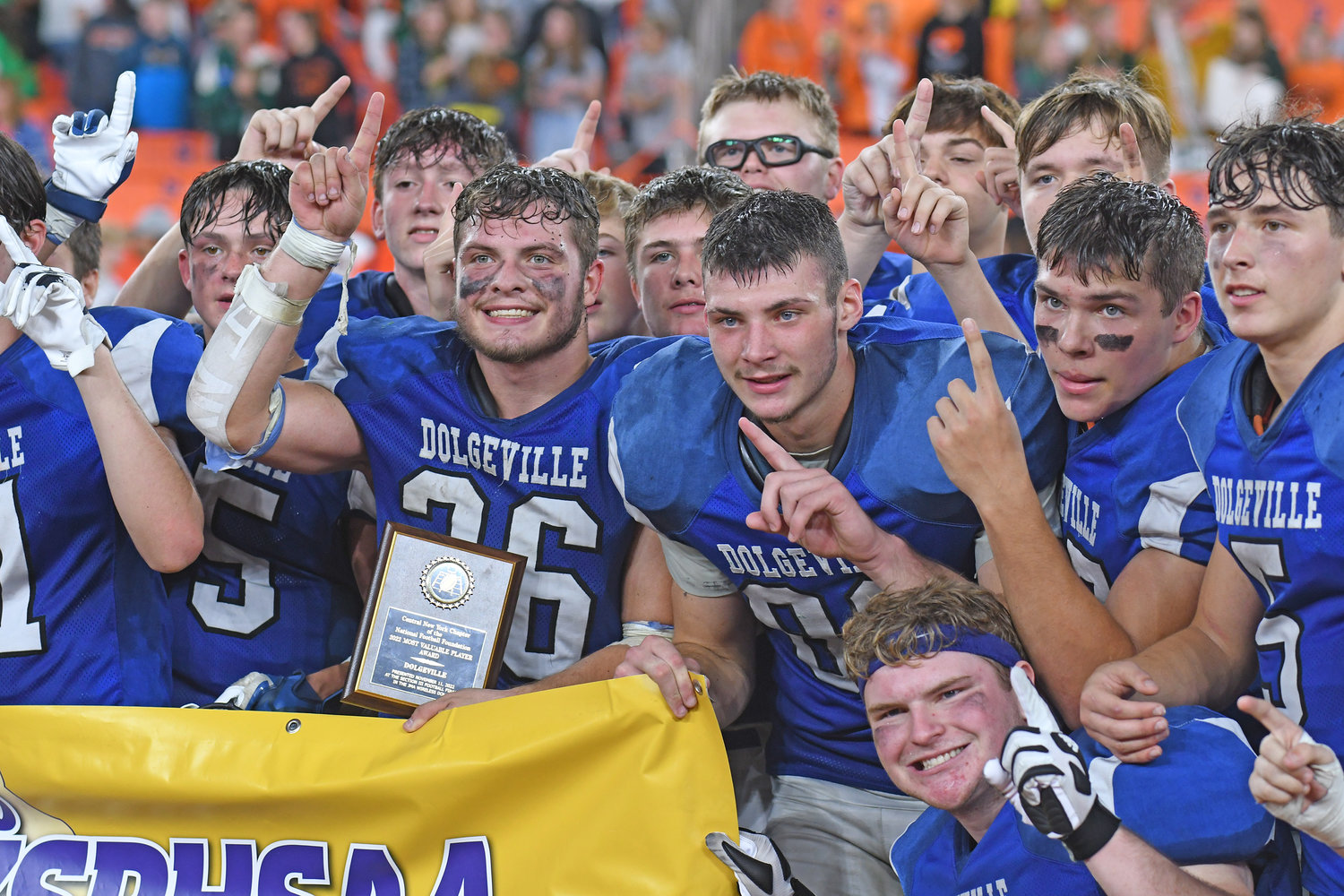 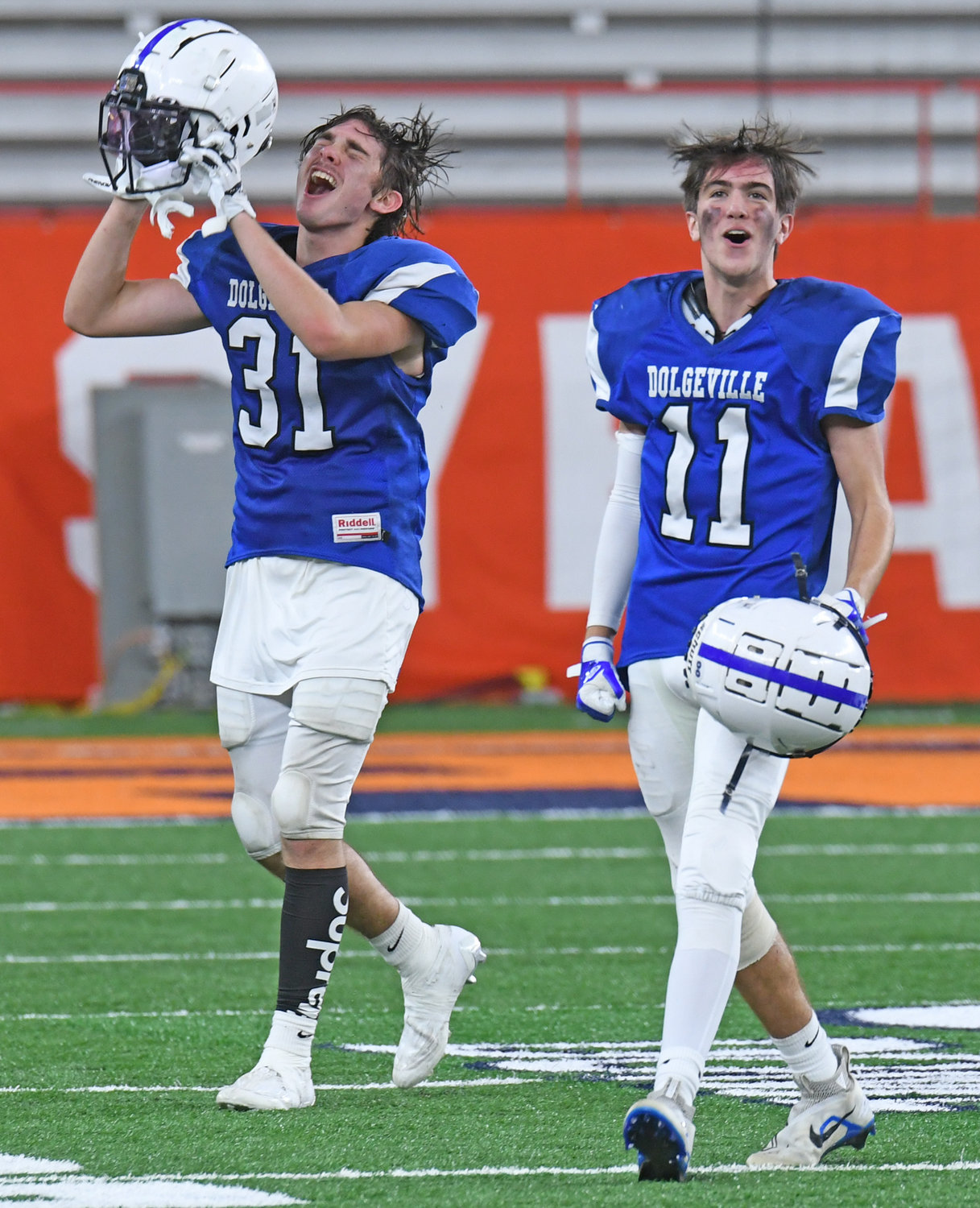 Dolgeville's Michael Blaskey, left, and TJ Rankins whoop it up after the final seconds tick away in the Section III Class D win over Beaver River in the championship at the JMA Wireless Dome in Syracuse.
(Sentinel photo by John Clifford) 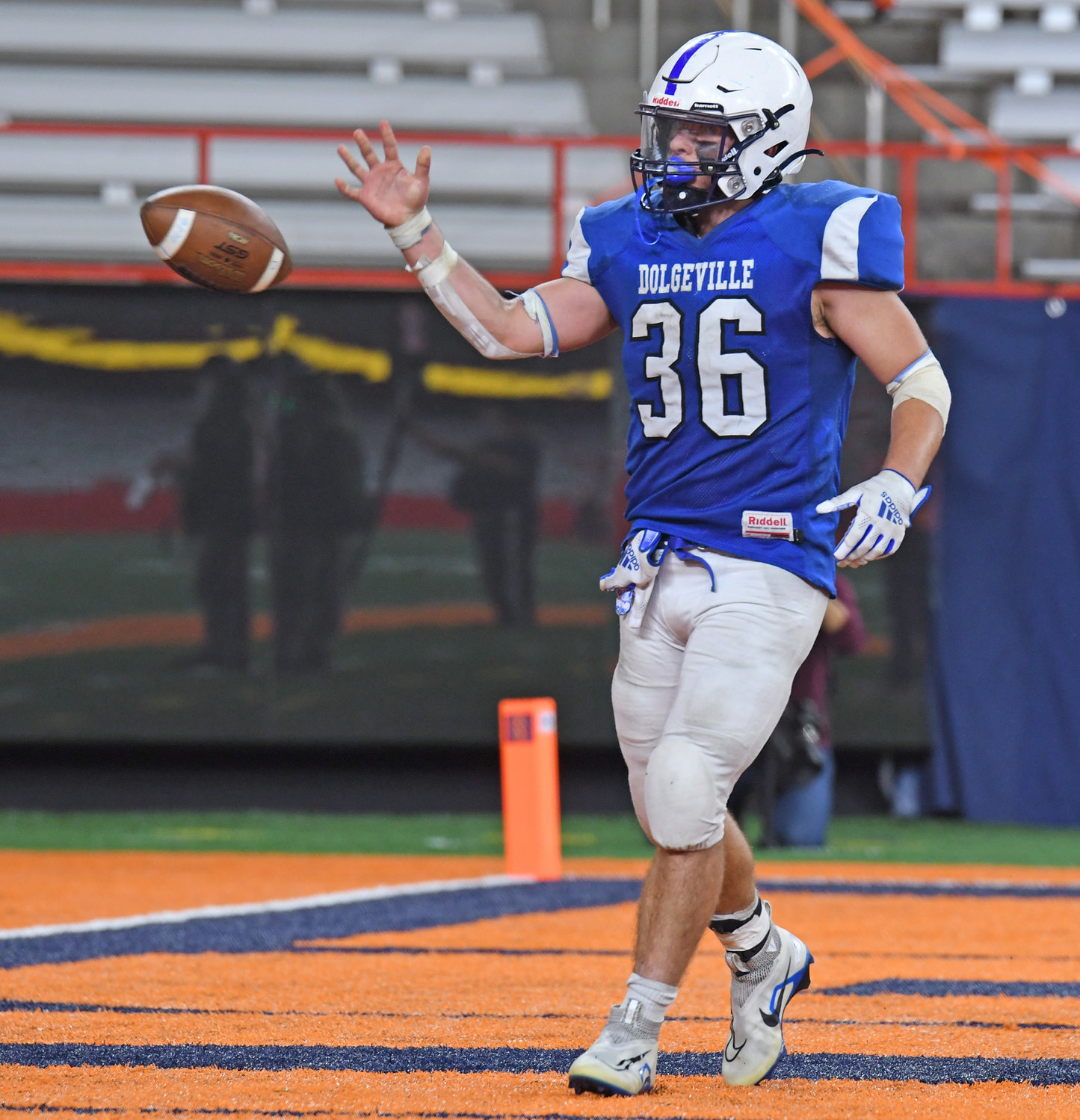 Dolgeville's Jared Bilinski tosses the ball to a referee after scoring a touchdown on Friday afternoon during the Class D final at the JMA Wireless Dome in Syracuse. Bilinski totaled four rushing touchdowns in the Blue Devils' 44-24 victory over Beaver River
(Sentinel photo by John Clifford) 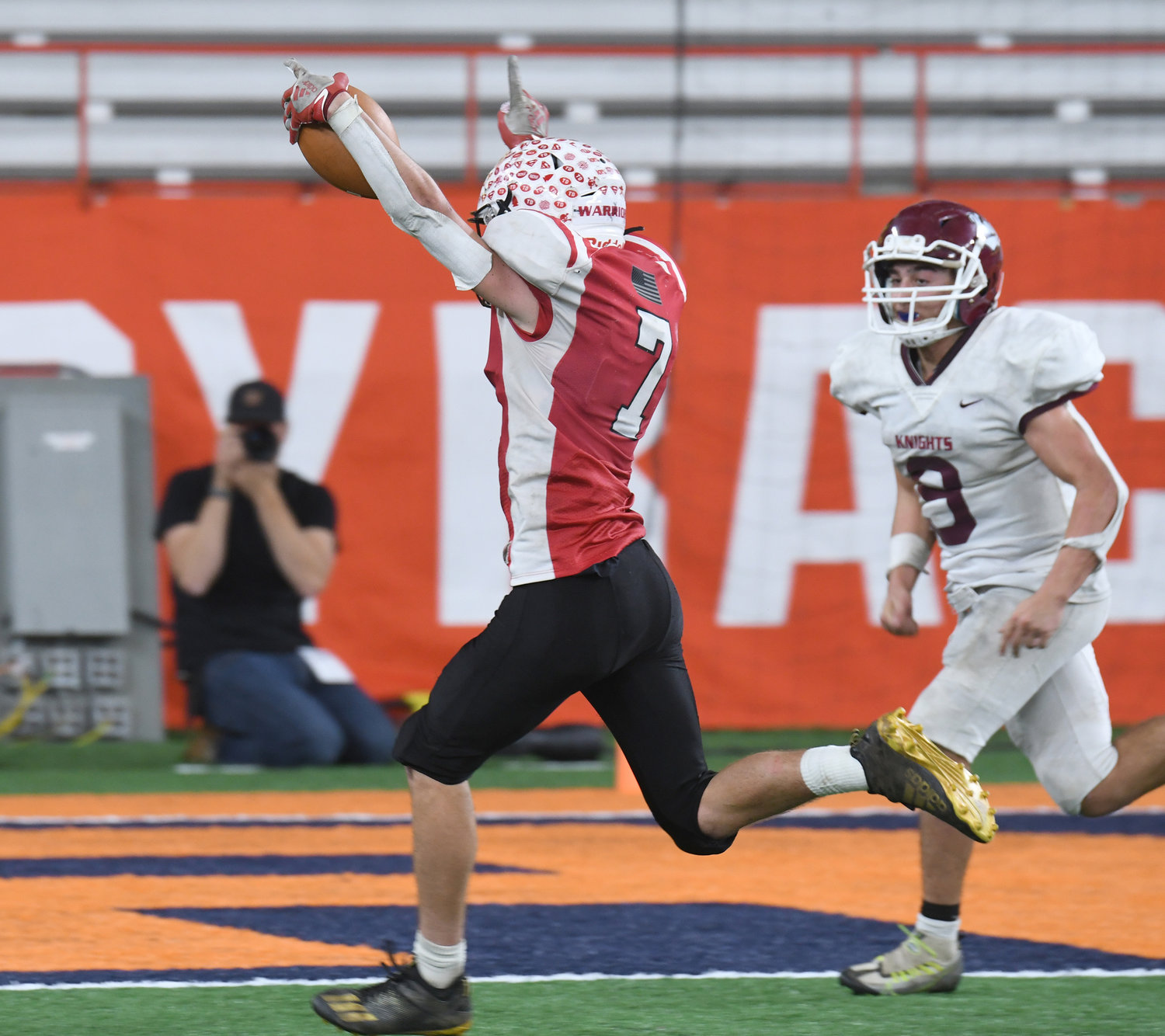 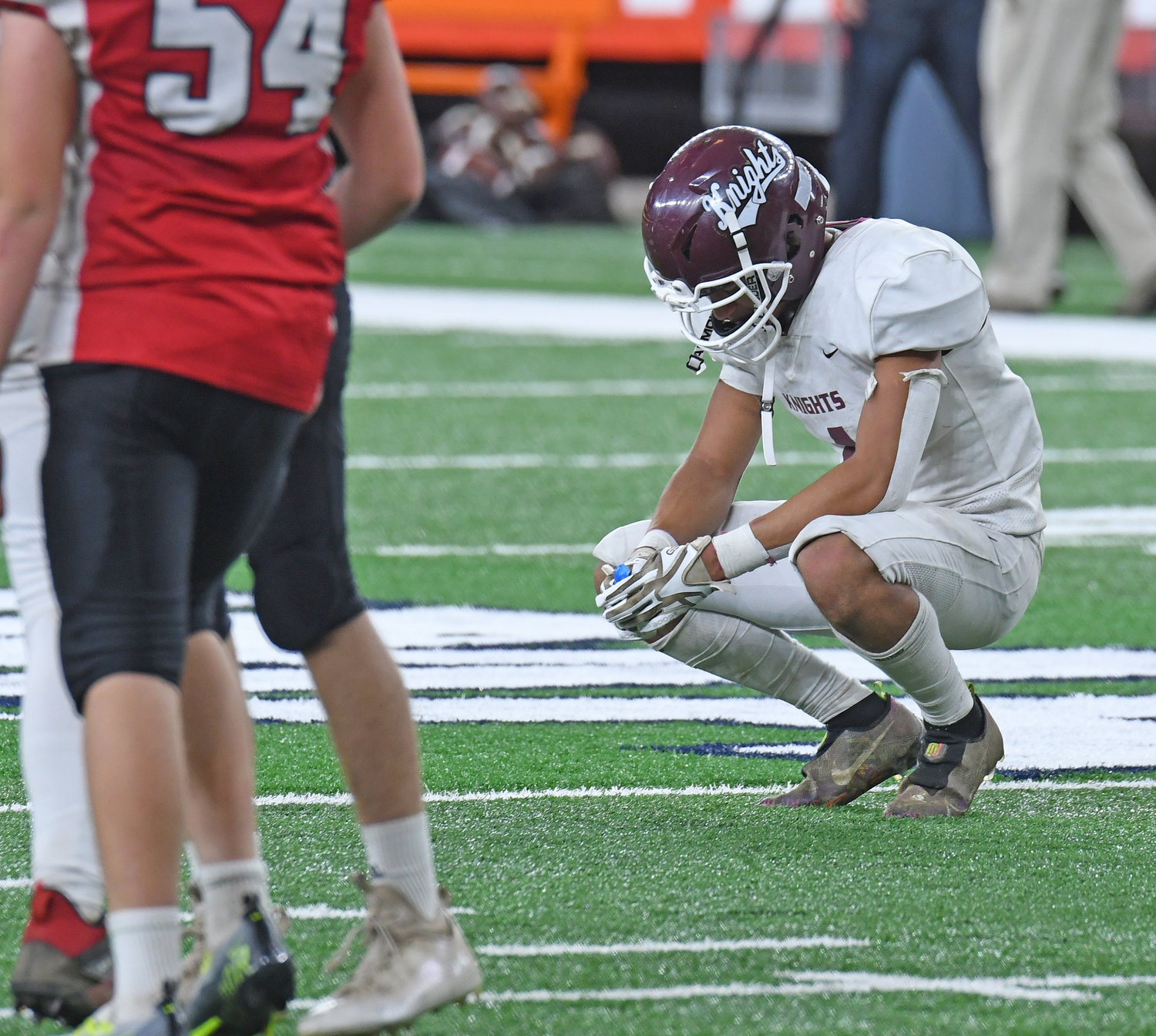 Frankfort-Schuyler's Lionell Coulthurst reacts after Morrisville-Eaton claimed the Section III 8-man title Friday afternoon at the JMA Wireless Dome in Syracuse. Coulthurst had a touchdown in the first half as Frankfort-Schuyler led 16-2. Morrisville-Eaton won 30-28 with help from a late stop to claim the 8-man title.
(Sentinel photo by John Clifford) 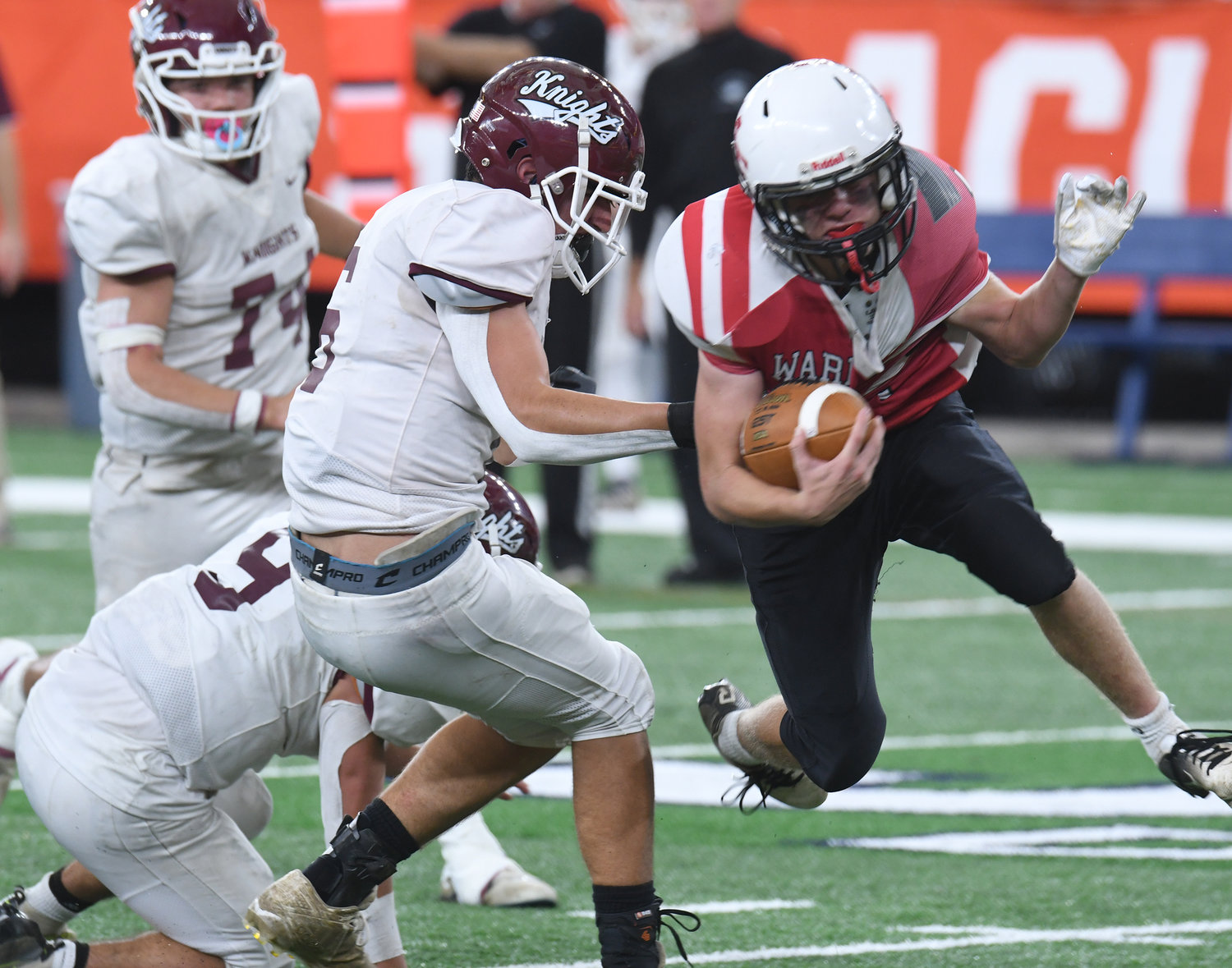 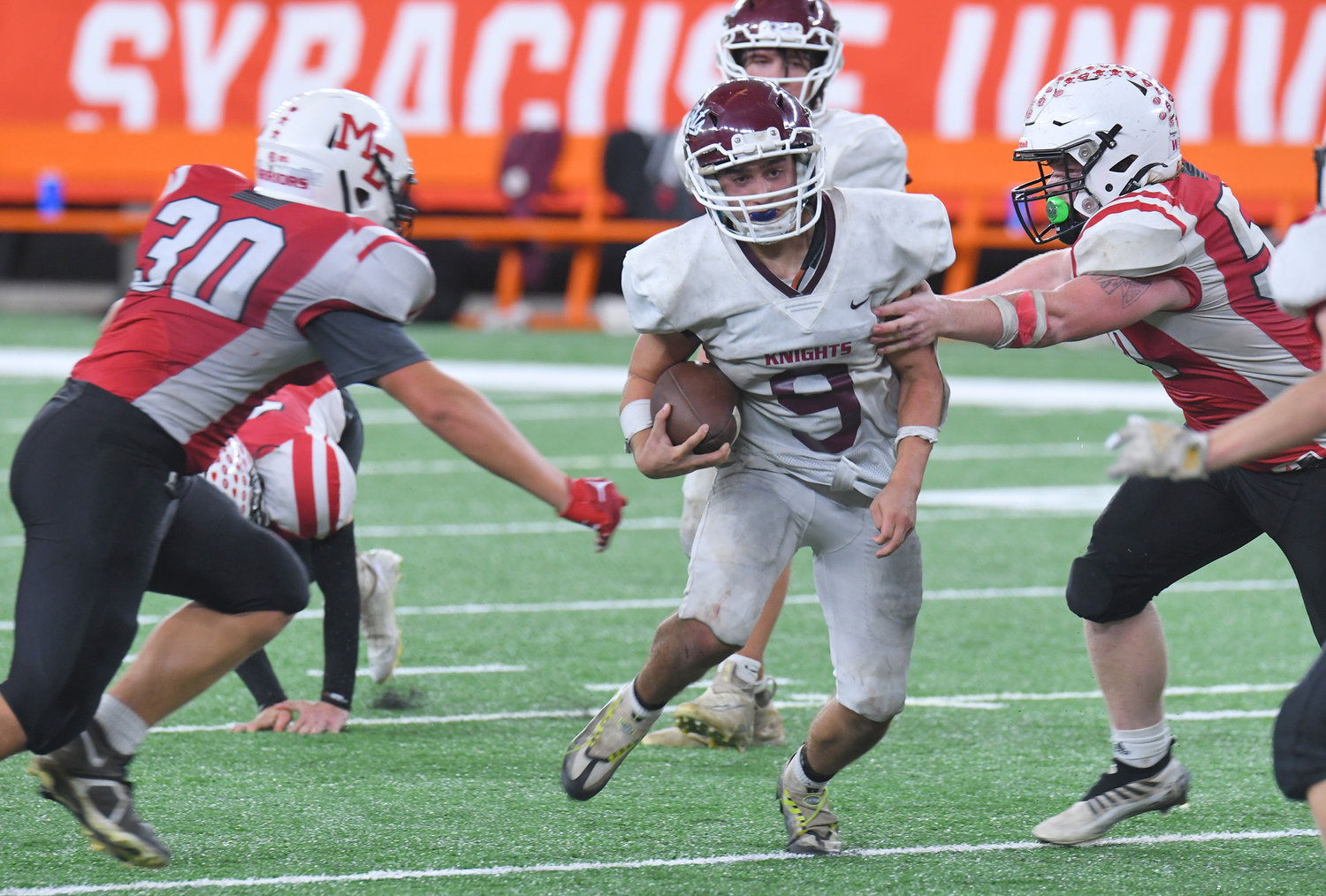 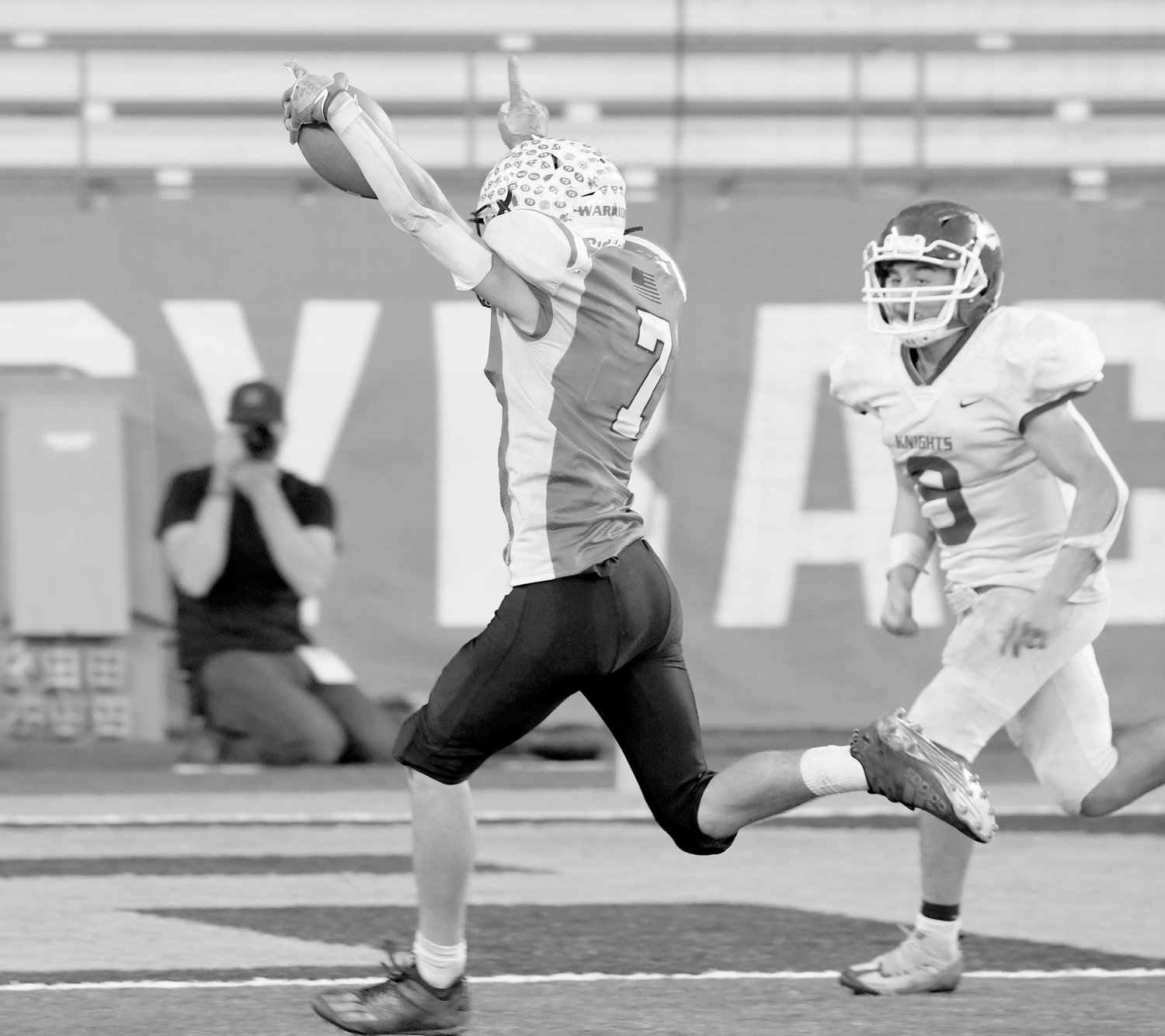 The 19 Section III titles are believed to be a record.

The Blue Devils (10-0 overall) are sectional champions for the second time in as many years. Dolgeville advances to take on Section IV Tioga’s in a state regional game at 5 p.m. Nov. 18 at Cicero-North Syracuse.

On Friday, Bilinski scored on runs of 10, 3, 3 and 12 yards to dominate the ground game against Beaver (8-2, both losses to Dolgeville).

His second TD of the day helped give the Blue Devils some cushion in the third quarter. He polished off a drive with a 3-yard run to put Dolgeville ahead 22-6 with 5:43 left in the quarter.

Bilinski also had an interception that helped give Dolgeville good field position.

Bilinski capped a drive for his third score of the game. Mosher’s 2-point pass to Cameron Dager sent the Blue Devils up 30-6 with 4:08 left in the third.

Beaver River responded with a touchdown pass to pull the Beavers within 30-12, but Mosher countered on Dolgeville’s next drive by hitting Kamryn Comstock for a 13-yard score for a 36-12 lead.

Top-seeded Morrisville-Eaton got a key offensive effort in the second half and made a big stop with under a minute to play to edge second-seeded Frankfort-Schuyler 30-28 in the Section III 8-man football championship at Syracuse University’s JMA Wireless Dome.

Frankfort-Schuyler led 16-2 at halftime before Martino Rocco scored his second total touchdown of the game with 7:26 to go in the third quarter.

However, Morrisville-Eaton got a 52-yard rushing score from James Dapson about a minute later and then Carter Highers scored from the one with under a minute left in the third quarter to get within six points.

Highers added another touchdown early in the fourth quarter for ME’s first lead before Rocco answered with a rushing touchdown with 7:29 remaining.

Dapson helped Morrisville-Eaton re-gain the lead with 4:01 left on a five-yard run and his second start of the game.

On Frankfort-Schuyler’s ensuing drive, the Knights got to ME’s 12, but the Warriors made a stop on fourth down to clinch the win.