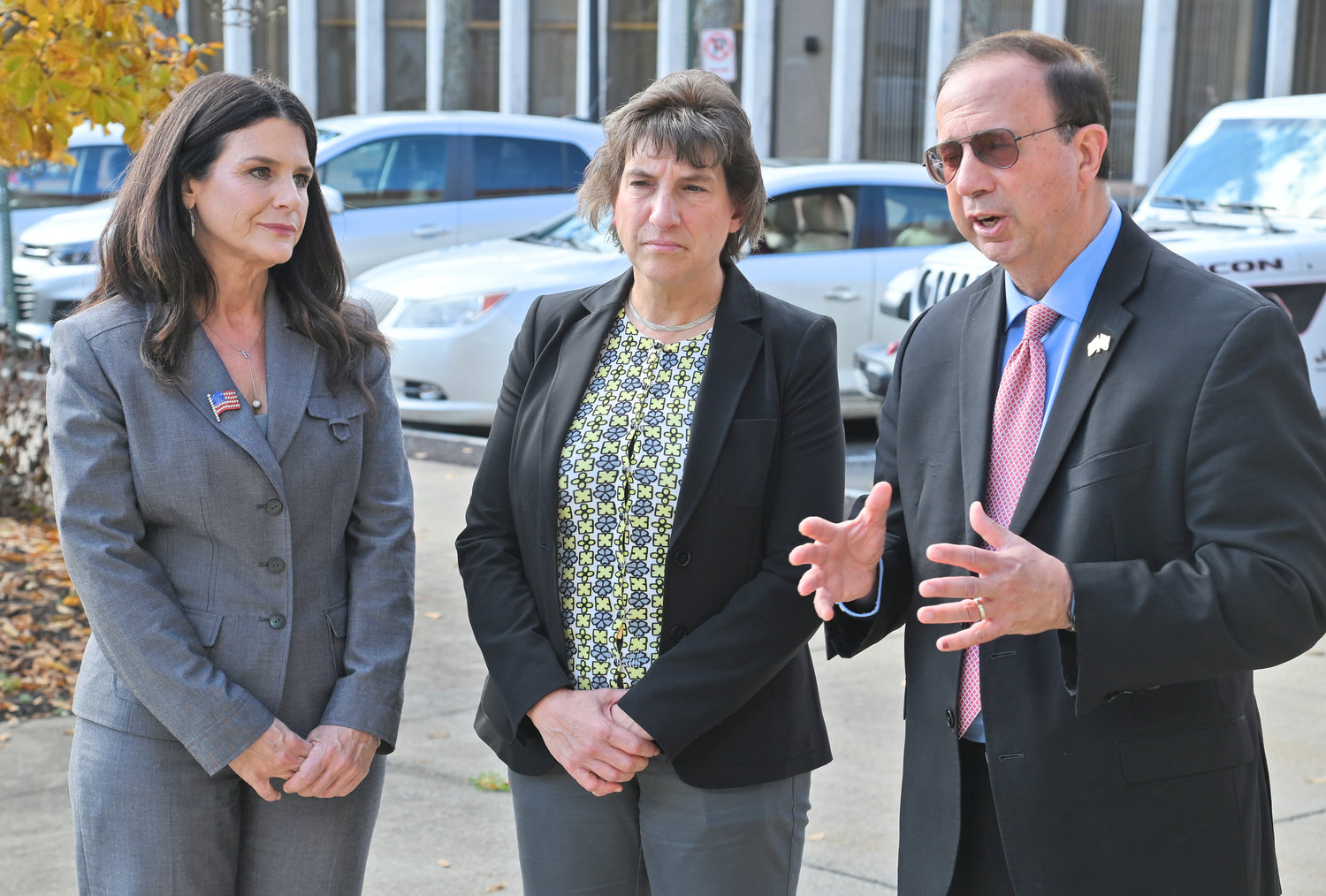 During a press conference outside Rome City Hall Tuesday, Sen. Joseph A. Griffo and Mayor Jacqueline M. Izzo praised Republican Conservative County Clerk candidate Mary Finegan for assisting in efforts to get the Rome Department of Motor Vehicles office back up and running full-time. Griffo is also introducing legislation that would allow counties to receive a 12.7% remittance on all DMV transactions, including in-person, online and by self-serve kiosk. From left: Finegan, Mayor Izzo and Sen. Griffo.
(Sentinel photo by John Clifford)
Posted Wednesday, October 26, 2022 7:40 am
Nicole A. Hawley
Staff writer
email / twitter

Finegan is facing Merima Smajic-Oren, a Democrat, in the Nov. 8 general election for Oneida County Clerk. Smajic-Oren was an outspoken critic of the partial closure of the Rome office and also campaigned for its full reopening. On Oct. 11, County Clerk Sandra J. DePerno said hours of operation for the 301 W. Dominick St. office would be 9 a.m. to 4 p.m. Monday through Friday, with the office closed for lunch from noon to 1 p.m.

In May, the county clerk announced the Rome office would be closed due to staff shortages. At the time, DePerno stated that the Rome office could not function within state DMV guidelines due to the lack of staff.

Following the announcement, Izzo stated that the city had not been notified by the County Clerk’s Office in advance of the closure. Days later, the county clerk’s office released a statement indicating that the Rome DMV would now be open 9 a.m. to 4:30 p.m. Tuesdays and Thursdays only, effective Tuesday, May 31.

The DMV opened under the newly stated hours on Oct. 13.

In addition to commending Finegan’s efforts to reach out to and work with County Clerk DePerno in reestablishing operations at the Rome DMV five days a week, Griffo announced his plans to introduce bipartisan legislation, backed by Assemblywoman Marianne Buttenschon, D-119, Marcy, in the State Assembly, that would bring online and kiosk transactions to the downtown DMV office, in addition to making them in line with the amount of money counties receive for in-person transactions from the state.

In his remarks about Finegan, Griffo stated that the Whitestown town clerk came up with the idea of bringing self-service kiosks to the DMV if elected. However, while in-person transactions remit 12.7% of each transaction back to the county, and that counties receive 2.5% of certain online transactions, currently no money is received through kiosk transactions.

Griffo said his legislation would allow counties to receive 12.7% for each online and kiosk transaction as well, which would make the remittance “fair and consistent” across the board.

“Thanks to Mary’s forward-thinking suggestion, I will be introducing legislation that will help local governments financially when New Yorkers conduct transactions either online or through kiosks at the DMV,” said Griffo. “Mary has what it takes to be county clerk, and I look forward to continuing to work with her to move Oneida County forward.”

Griffo further stated that he would be introducing the legislation during the next State Senate session.

Finegan said introducing kiosks at the county’s DMV offices would be a “small step” in moving operations forward.

“The Department of Motor Vehicles office must modernize and utilize technology to improve the in-person experience,” Finegan said. “I believe that the use of self-serve kiosks can do just that. There is no reason that simple transactions and appointment check-ins are not already happening. I approached Sen. Griffo with this idea, and I appreciate his willingness to submit legislation that aims to make the experience at the DMV easy.”

During the Oct. 11 announcement that the Rome DMV would be open five days a week, County Clerk DePerno said Finegan provided assistance and “valuable advice” to get operations back to full-time.

Izzo stated Tuesday that Finegan’s long-time experience as town clerk would serve well at the county level, as well as her established working relationships with county and state officials. She noted that Finegan was the only one to reach out and offer assistance to the county clerk to improve operations at Rome DMV.

Being a busy, well-utilized office, the mayor said it was important not only for the city, but for the region, to have operations go back to full-time.

“Within hours of the Rome DMV closure, Mary contacted me to offer her help and guidance towards a fast reopening,” said Izzo. “Her years of knowledge as a town clerk will serve her well, and allow her to hit the ground running with relationships she has built over the years with her colleagues throughout the state. I look forward to continuing our relationship not only with DMV operations, but the overall business of the Oneida County Clerk’s Office.”