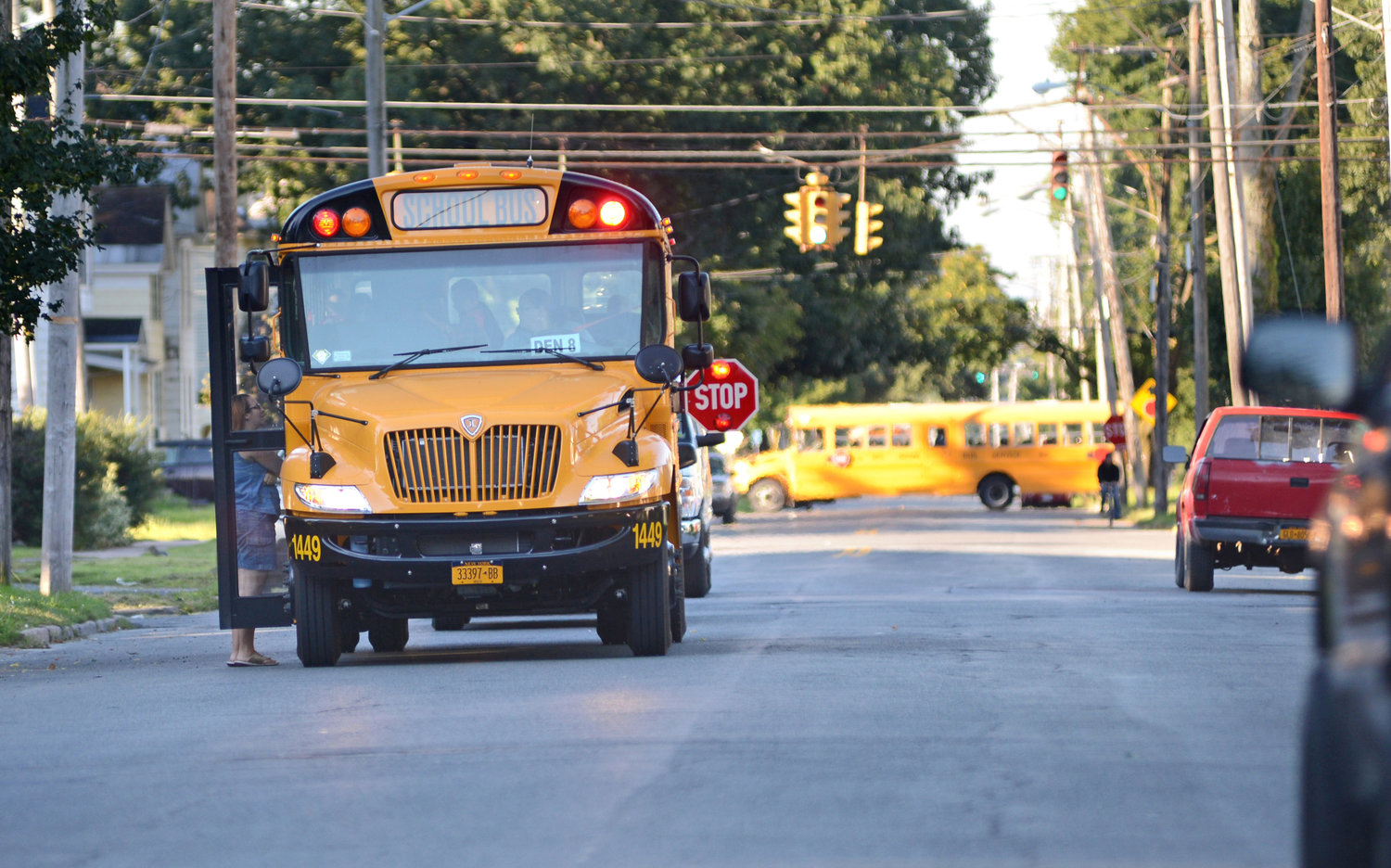 SOME SCHEDULES RELEASED — The Rome City School District has released bus schedules for Rome Free Academy and Strough Middle School students via a listing on the district’s website. Elementary school schedules have been delayed by the relocation of students from the now-closed Staley Elementary School. Elementary routes will be released next week, according to district officials.
(Sentinel file photo by John Clifford)
Posted Friday, September 3, 2021 9:00 am

With the recent closure of Staley Elementary School, 620 E. Bloomfield St., because of the August flooding, school district officials have to revamp many of the district’s elementary school bus routes.

As a result, the district’s elementary school bus route schedule will be released Wednesday or Thursday, Sept. 8-9, according to district officials.

The district was able to release the bus schedule for students attending Rome Free Academy, 95 Dart Circle, and Strough Middle School, 801 Laurel St., on Thursday via a link on the district website.

For students riding a bus to RFA, the bus routes and schedule can be found online at https://www.romecsd.org/common/pages/DisplayFile.aspx?itemId=16505215. The website lists 26 routes for RFA with the earliest pickup being the Turin Road stop at 5:47 a.m. on bus Route 21.

For students riding a bus to Strough, the bus routes and schedule can be found at https://www.romecsd.org/common/pages/DisplayFile.aspx?itemId=16506152. The website lists 17 routes for Strough with the earliest pickup also being 5:47 a.m. on bus Route 12 on Stokes-Westernville Road.

In addition to the bus routes, the district is seeking help from parents whose children will not be riding a bus this year. The district asks that those parents contact Andy Thompson at 315-338-6550 or email him at athompson@romecsd.org as soon as possible. This information helps him and his team adjust routes and scheduling, the district website adds.

This fall will mark the first time in more than 60 years that Rome City School District students will not be transportated by the Birnie Bus Service. The district chose to enter into a contract with a new vendor, First Student, starting this fall. Signage at the Birnie Bus Company garage, 248 Otis St., on the Griffiss Business and Technology Park, has been taken down and voices messages left on the company’s answering system have not been returned.

Birnie Bus Company, which had been familiy-owned and operated, was acquired by Krapf School Bus in 2017.

Earlier this week, the Utica City School District announced that it has filed a countersuit against Birnie Bus Service, Inc. in response to their suit filed against the school district in July, claiming it owed the bus company $2.7 million for invoices from April through June of last year.

In their countersuit however, UCSD is suing for breach of contract and nonpayment. Utica Attorney Donald R. Gerace, who represents the school district, said Birnie actually owes the district more than $34 million for damages since the 2016 school year.

In Birnie’s claim, they stated the school district did not pay its invoices for April, May and June of 2020 when bus services were not used. However, Birnie claimed the company still had to remain staffed during the pandemic. Gerace said, however, those were not costs the district is responsible for.

“We had many problems with their performance,” Gerace said, adding that these problems had been occurring for the duration of a few years and had been in violation of their contract. “We even had students dropped off for athletic contests who were never picked up. They (Birnie) didn’t respond to requests for remediation of their actions.”

The countersuit claims Birnie Bus did not meet its contractual obligations over the past four school years by:

• Failing to pick up about 300 students per year.

• Picking up students late about 125 times per year.

• Dropping off students at the wrong locations about 20 times per year.

• Dropping off students late about 100 times per year.

UCSD also accuses Birnie of failing to pick up 315 students; picking up 125 students late; dropping off 92 students late; and dropping students off at the wrong location 19 times during the abbreviated 2021 school year from March through June.

Schools met in person “just a few months last school year and we had just as many problems as a whole year,” Gerace said.

UCSD stated Birnie also failed to return their calls 100 times and “were not truthful” about having appropriate levels of staffing to meet contractual obligations, meanwhile, Gerace said the Board of Education and administration attempted to speak with Birnie representatives “several times.”

The district is asking for more than $24 million in liquidated damages for these complaints.

According to court documents, in the second and third counterclaims, the district is asking for $5 million for the performance issues and another $5 million for what they’re calling “bad faith actions” during the 2020-21 school year.