Oneida residents have long considered the Hotel Oneida to be an eyesore in the community’s downtown. 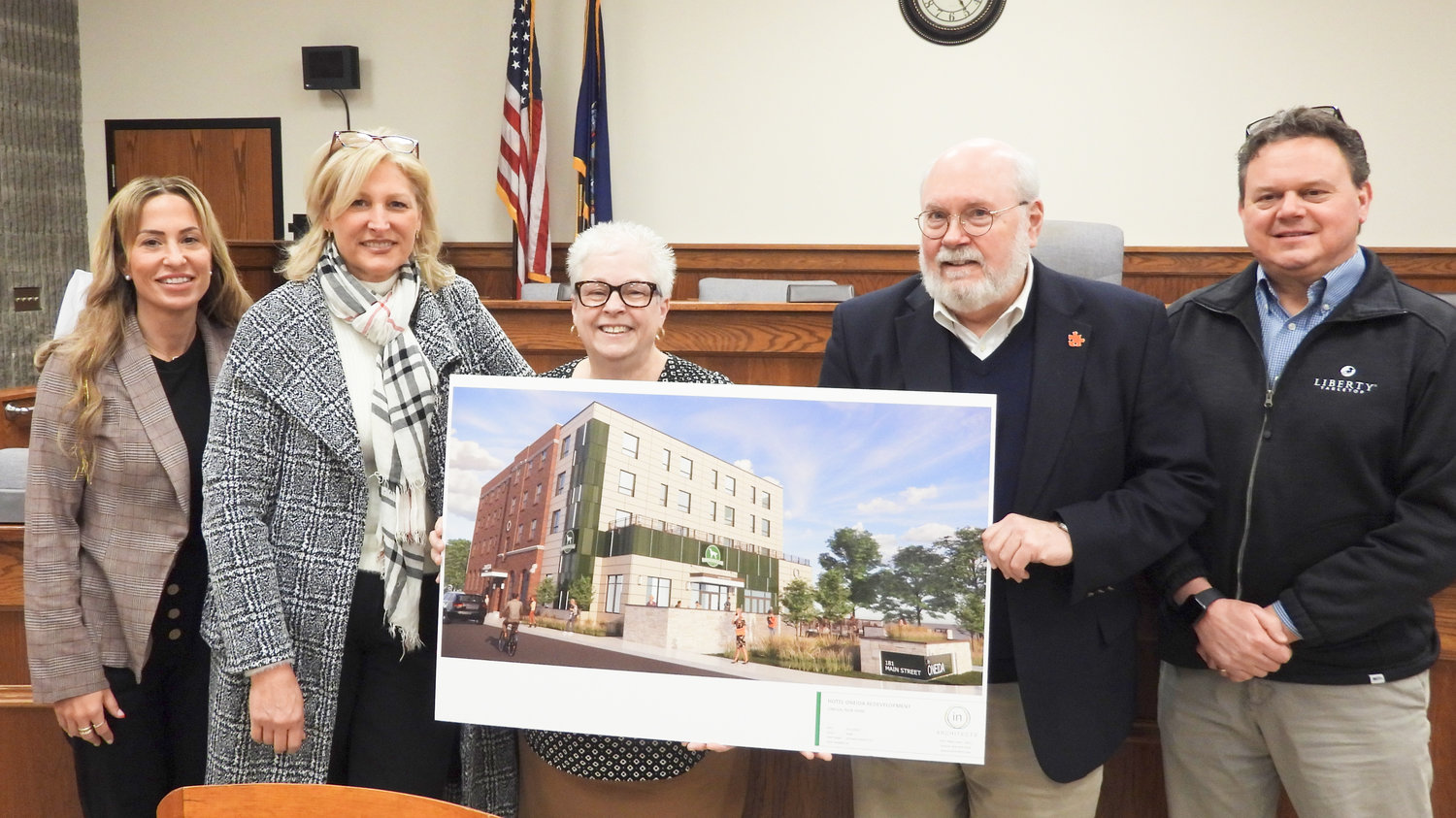 Members of Oneida city government and a member of the development team pose with a rendering showing what The Oneida will look like in 2024. From left: Supervisor Brandee DuBois; Mary Cavangh; Mayor Helen Acker; Managing Member Edward Riley; and Supervisor Matthew Roberts.
(Sentinel photo by Casey Pritchard) 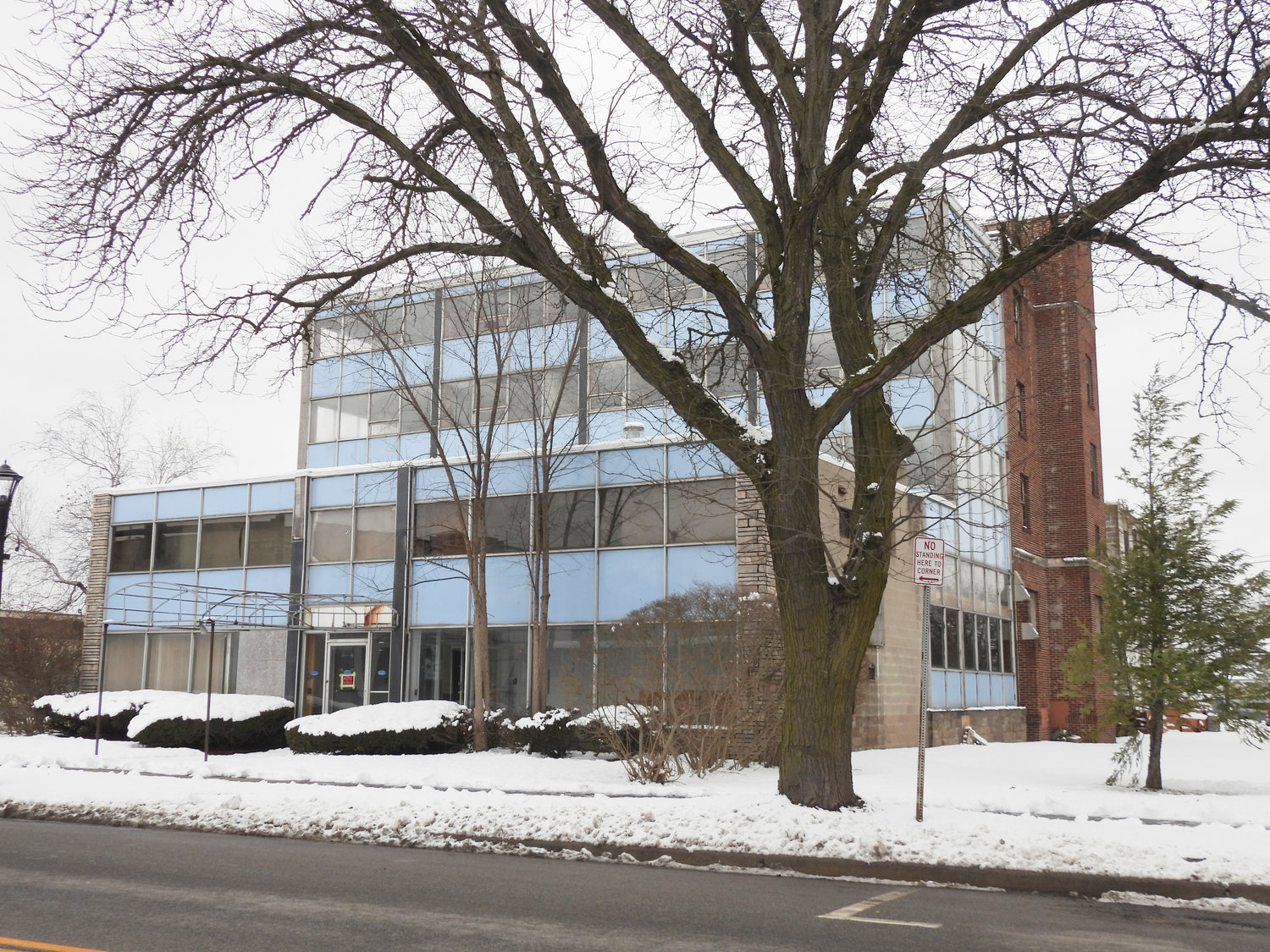 The Hotel Oneida, shown here on Tuesday, Jan.24, has long been a sore topic in Oneida with the vacant structure sitting idle for more than a decade. City officials and a development team have unveiled a renovation project that will aim to breathe new life into the property.
(Sentinel photo by Casey Pritchard) 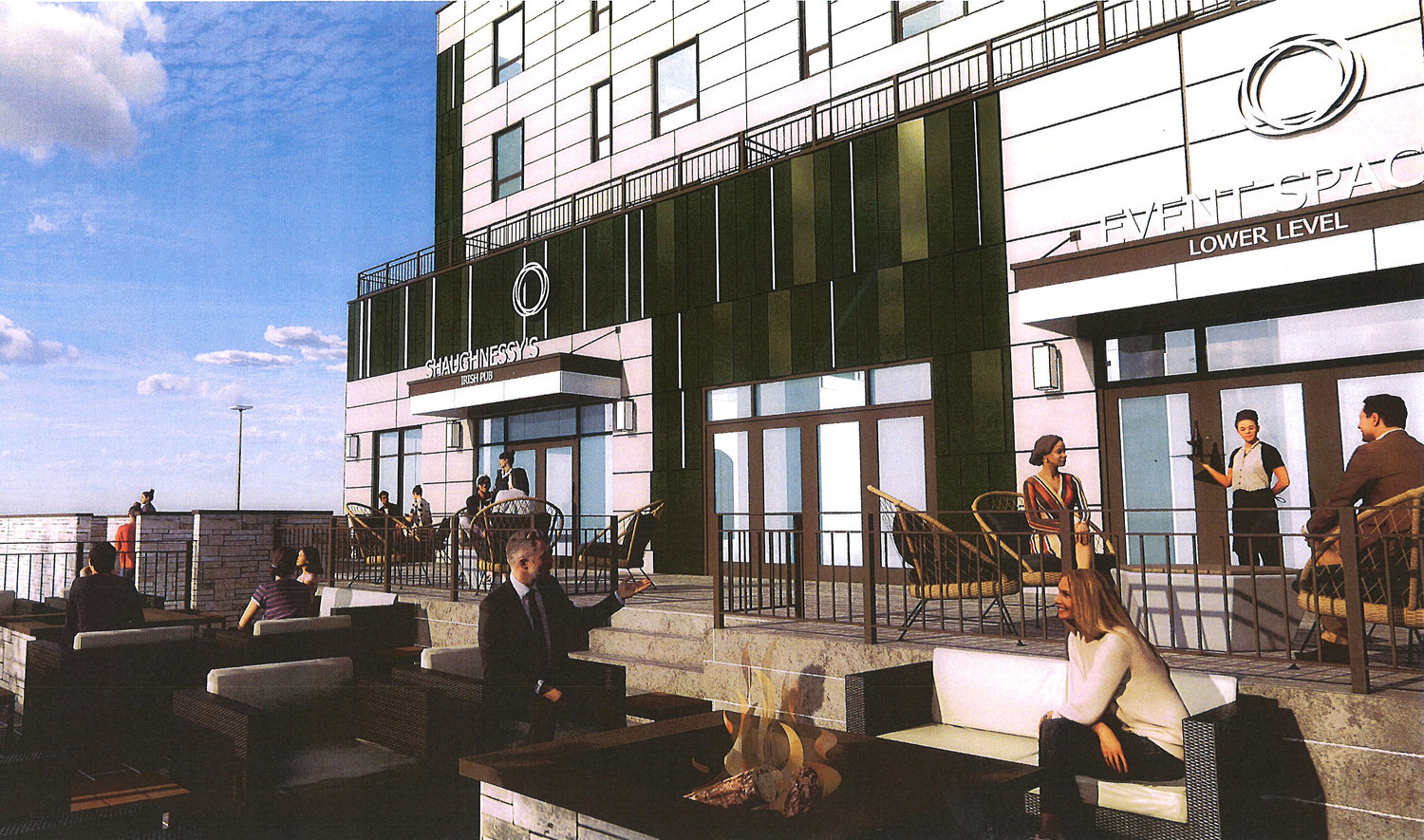 This is an artist’s rendering of what “The Oneida” could look like when the roughly $8.7 million renovation of the former Hotel Oneida is complete. Developers said the project has a target date of completion in August 2024.
(Illustration courtesy Hotel Syracuse Restoriation, LLC) 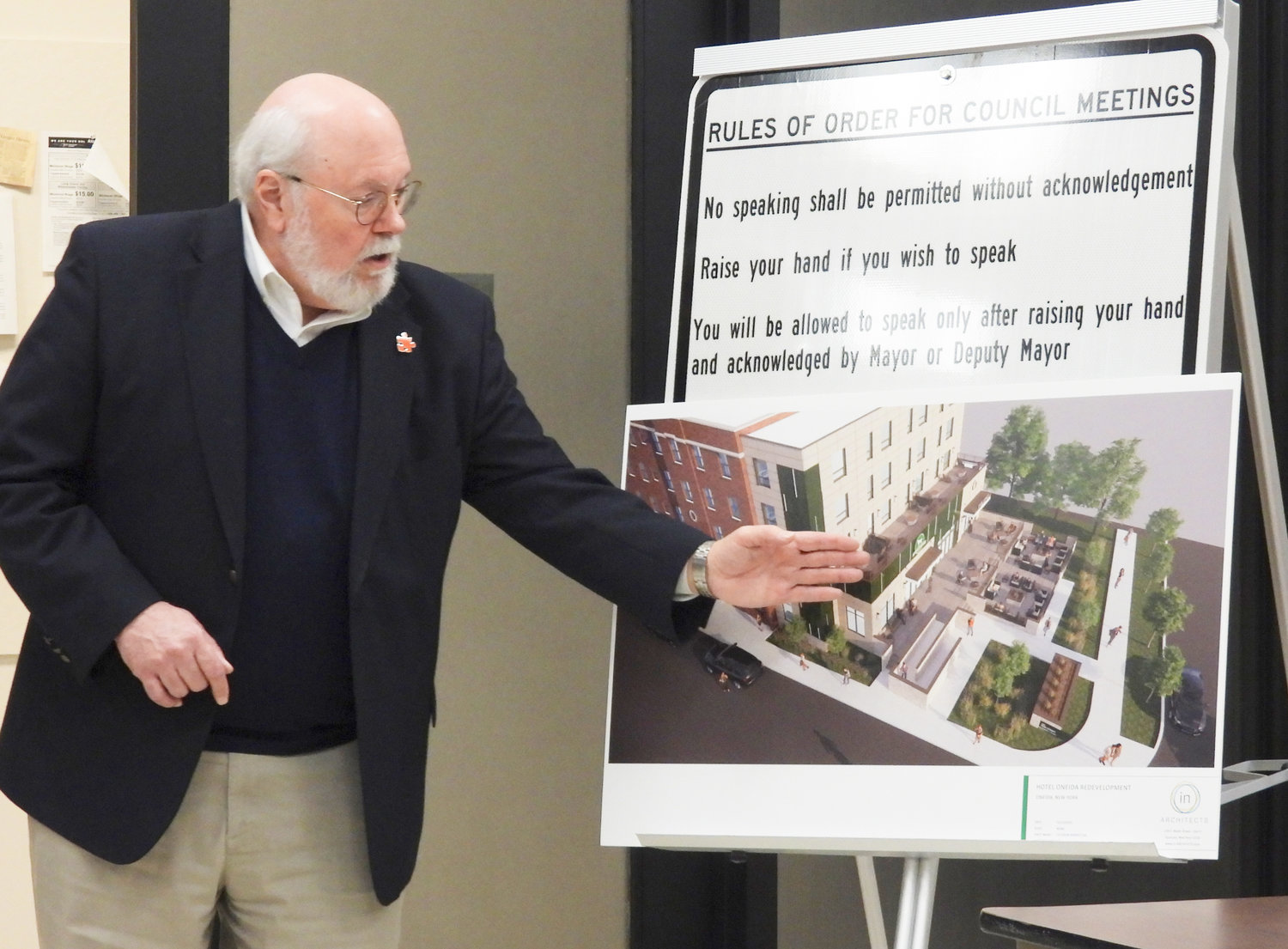 ONEIDA — Oneida residents have long considered the Hotel Oneida to be an eyesore in the community’s downtown. But that is expected to change, and soon, according to developers and city officials.

At a press conference Tuesday, plans for the embattled building were outlined by the new project’s development team and city officials.

"This is an exciting time for Oneida," Mayor Helen Acker said. "Our first project that everyone has been talking about since day one of the Downtown Revitalization Initiative has been Hotel Oneida. This is the number one project that people want done in the city."

The Hotel Oneida was built in 1925 and opened in 1927. It remained a popular spot for visitors and community members and was converted to a restaurant and hotel in 1982. By the early 2000s, the building had fallen into disrepair and it was closed in 2009.

In addition to the unveilng of the plans for a new building was the the unveiling of a new name for the facility, “The Oneida,” courtesy of owner Robert Sullivan.

Edward Riley of Hotel Syracuse Restoriation, LLC, the managing member of the Oneida project, outlined the designs and renovations planned. Riley managed the restoration of the former Hotel Syracuse, a $74 million project that saw the Hotel Syracuse become the Marriott Syracuse Downtown, which is now a four diamond-rated hotel.

"Riley did a fantastic job in Syracuse and Supervisor Matthew Roberts called him and asked if he would like a tour of the Hotel Oneida. And that's where it started," Acker said.

Riley said that this project was made possible thanks to public and private partnerships, and he and his team have already gotten some feedback from the community. "Candidly, the [Hotel Oneida] is something that probably nobody likes to look at," he said. "I know personally, I don't like the blue exterior,” he said jokingly of 1960 addition to the parcel.

"I've heard that about that blue addition more than once," Riley said with a laugh. "And I can tell you right now, that's going."

The building's ground and lower levels will consist of a Shaughnessy's Pub Restaurant and Catering facilities.

The project budget is estimated to be around $8.7 million.

Riley said that there will be some work will be done to preserve historic spaces but that it wasn't practical across the whole building.

"So many of those historic spaces in this building have been lost, so it's not really practical to go back and restore things that are either not there or have been changed around so much it doesn't have that character anymore," he said.

Riley said when everything is up and running, they're looking at 54 people employed both full-time and part-time, equating to 24 full-time equivalent positions.

"One thing we want to do in terms of being positive to the area is how we hire," he said. "In Syracuse, over 65% of our associates in Shaughnessy's and the Marriot are from the local community and are probably 12 to 14 blocks away and that there has seen a $7.5 million of influx of employment in that area. And having a service industry like this, we don't need a highly skilled labor pool. We just want people who want to work and work themselves up. We'll be focusing on local people in the city of Oneida and make an impact. If we're going to be a good neighbor, we have to step up and do that."

During the question and answer session, one member of the audience asked what would happen in a worst case scenario and the project is not finished on time or not finished at all.

"The way the state and this grant works is the individual has to put the money up for the project and then they are reimbursed," Acker said. "The city is not out the money, the client is. And that's any project, whether it's Hotel Oneida or any other. They have to prove they doing the job and they've paid their bill, whether they've bought four nails or 4,000."

Another question was what to do about parking. Riley responded that they are in talks with the city about using the parking lot behind the Kallet Civic Center.

Riley said construction is expected to be completed by August 2024. Apartments would hit the market in July and the pub's official opening would be in September.

Roberts said the city is fortunate to have Riley and his team taking on this project.

"Anyone who knows the legacy of what he and his team has done knows what they did with the Hotel Syracuse or places in Buffalo,” Roberts said. "When they agreed to the renovation, we got ourselves a real professional group to do this."

"The old adage from [Field of Dreams] is 'If you build it, they will come.' I think if we start with this as the cornerstone of the redevelopment of downtown Oneida, we'll see other buildings that have been vacant or falling apart start to be invested in and gain momentum," he continued. "This is just the start; 10 years from now, you won't recognize Oneida."