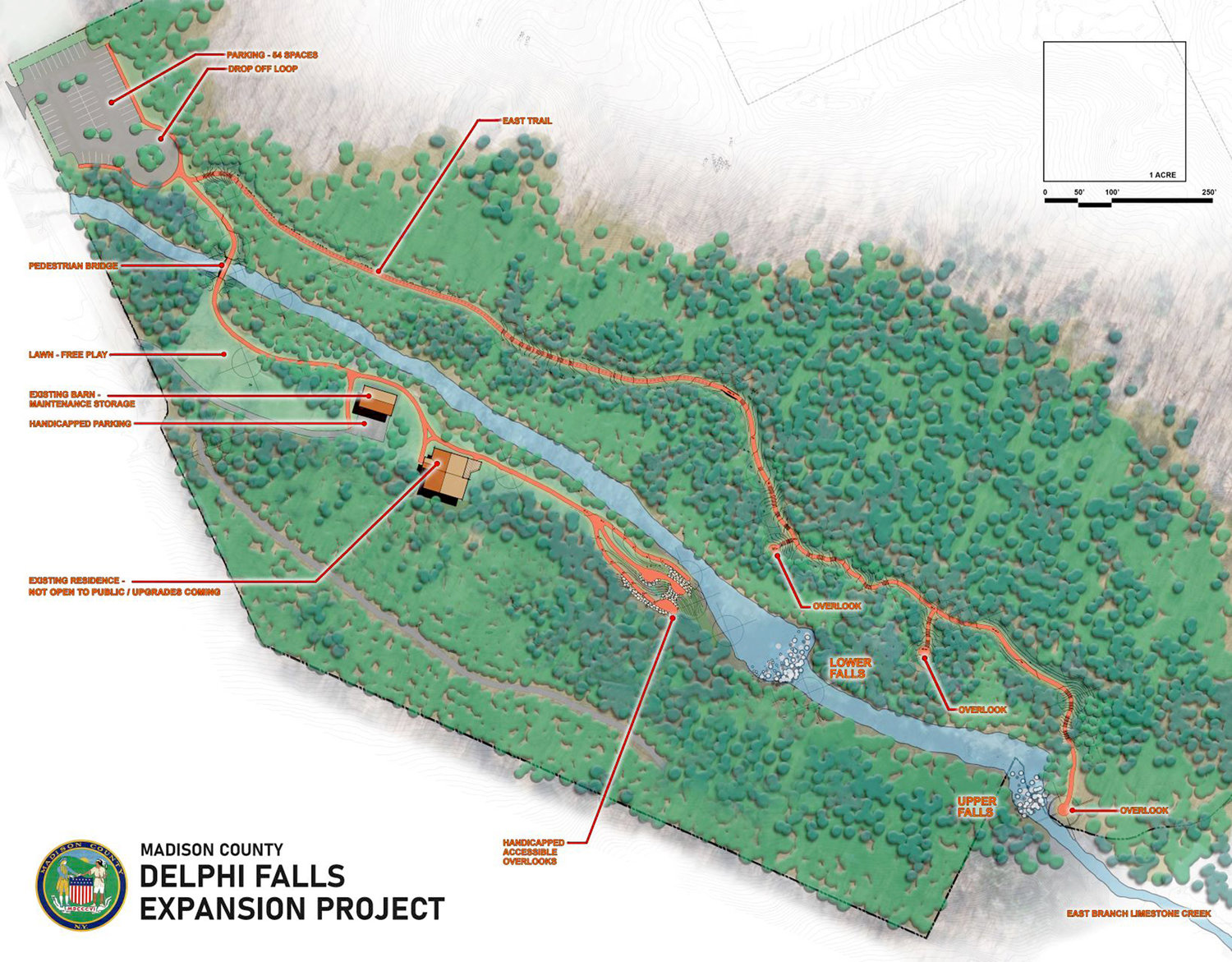 This summer, the 66-acre Delphi Falls County Park property – with only a fraction of its acreage currently accessible to the public – will be entering into phase one of planned improvements and expansion.
(Provided image)
Posted Thursday, July 14, 2022 1:30 pm
More information

-The park is currently open year round from sun up to sun down.

NEW WOODSTOCK  — Delphi Falls, a hidden gem among Madison County’s rolling hills that’s become the region’s latest outdoor recreation destination, is due to offer an enhanced experience for its visitors. This summer, the 66-acre property – with only a fraction of that currently accessible to the public – will be entering into phase one of improvements and expansion.

When locals call Delphi Falls a “hidden gem,” they really mean it. For more than 50 years, beginning in the mid 20th century, the property at 2006 Cardner Road was privately owned, said Scott Ingmire, director of the Madison County Planning Department. The park was acquired by the county and opened in 2018 and has quickly gained the interest of residents far and wide, becoming a popular subject for drone photography, backdrop for couple’s photo sessions, and ideal spot for a picnic on a summer’s day, officials said.

Visitors often come to cool off in the shallow waters below the majestic 62-foot tall lower waterfall, the park’s centerpiece that’s only a quick walk away from the parking lot.

With plenty of shaded areas and open grass nearby, guests of all abilities and curiosities have come to take in the park’s wonder, officials added.

Phase 1 of the project, to be performed by Upstate Companies LLC, will see the park undergoing numerous upgrades that are intended to increase the overall experience for visitors while keeping its natural beauty, according to officials.

The Phase 1 upgrades include:

While a lot more of the 66 acre property will be utilized, a large portion will remain natural and cut off from public access, Ingmire said. The park includes acres of woodland and riparian forest along the east branch of Limestone Creek.

Guests may continue to visit the outdoor attraction during this phase of the project, which began on Tuesday, Ingmire assured. Phase two may require some closures, which will be announced when the time comes, he said. All enhancements are anticipated to be complete by October, he said.

“We’re trying really hard to make this a better place, and hopefully everyone respects that,” Ingmire shared. Back in 2020, the county closed the park as its misuse was getting out of hand – this included people doing backflips off the falls and leaving the place littered with trash.

“We certainly hope that people will pick up their trash and not use the park in a way that’s offensive to others,” he added.

Officials hope to see a ripple effect in terms of the park’s benefit to the community.

“We’ve had Chittenango Falls State Park open to the public, which has been quite a draw and I think now (Delphi Falls) is on equal footing with that as far as an attraction that people are willing to travel to see. Certainly, it’s our hope that regardless of where people are coming from, there’s businesses in the DeRuyter and Cazenovia area that people will stop as part of their trip, and certainly there’s spinoff opportunities from that,” Ingmire said.

Until recently, Delphi Falls had remained a mystery to locals for years. In 2018, the private property was up for sale with a price tag the county just couldn’t match. Thanks to the generosity of Harold Jones, a retired Syracuse University professor, he purchased the land and in turn sold it to the county at a steep discount, donating nearly $750,000 when all was said and done, Ingmire explained.

Officials reported the total project cost for the Delphi Falls improvements is $1.3 million, with $1 million of that coming through State grants – a New York State Parks Grant and SAM/DASNY Grant from Sen. Rachel May, D-53, Syracuse, providing $500,000 each.