The last player on the roster of Holland Patent’s Section III title-winning football team has graduated, leaving a roster full of players looking to make their own history. 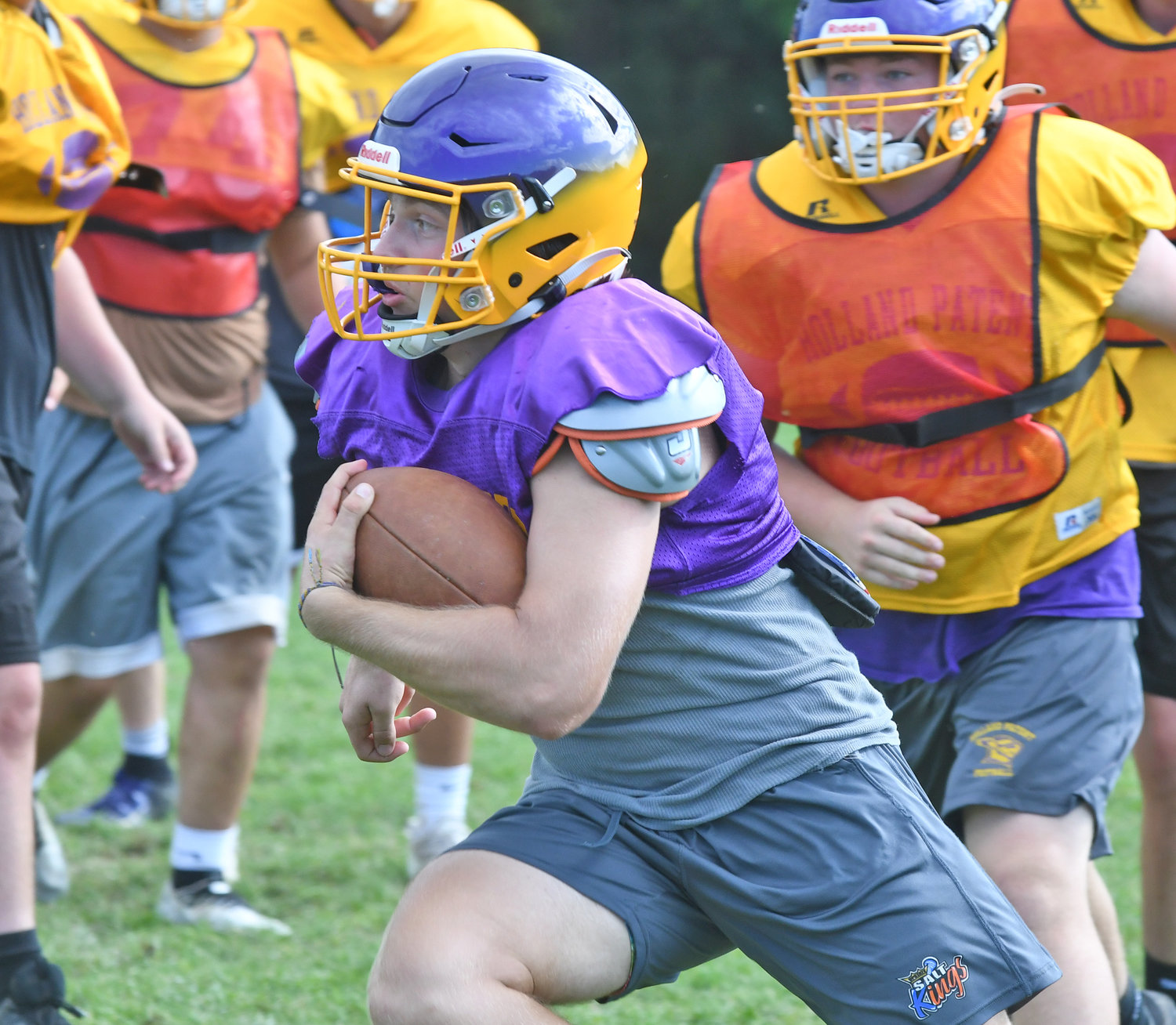 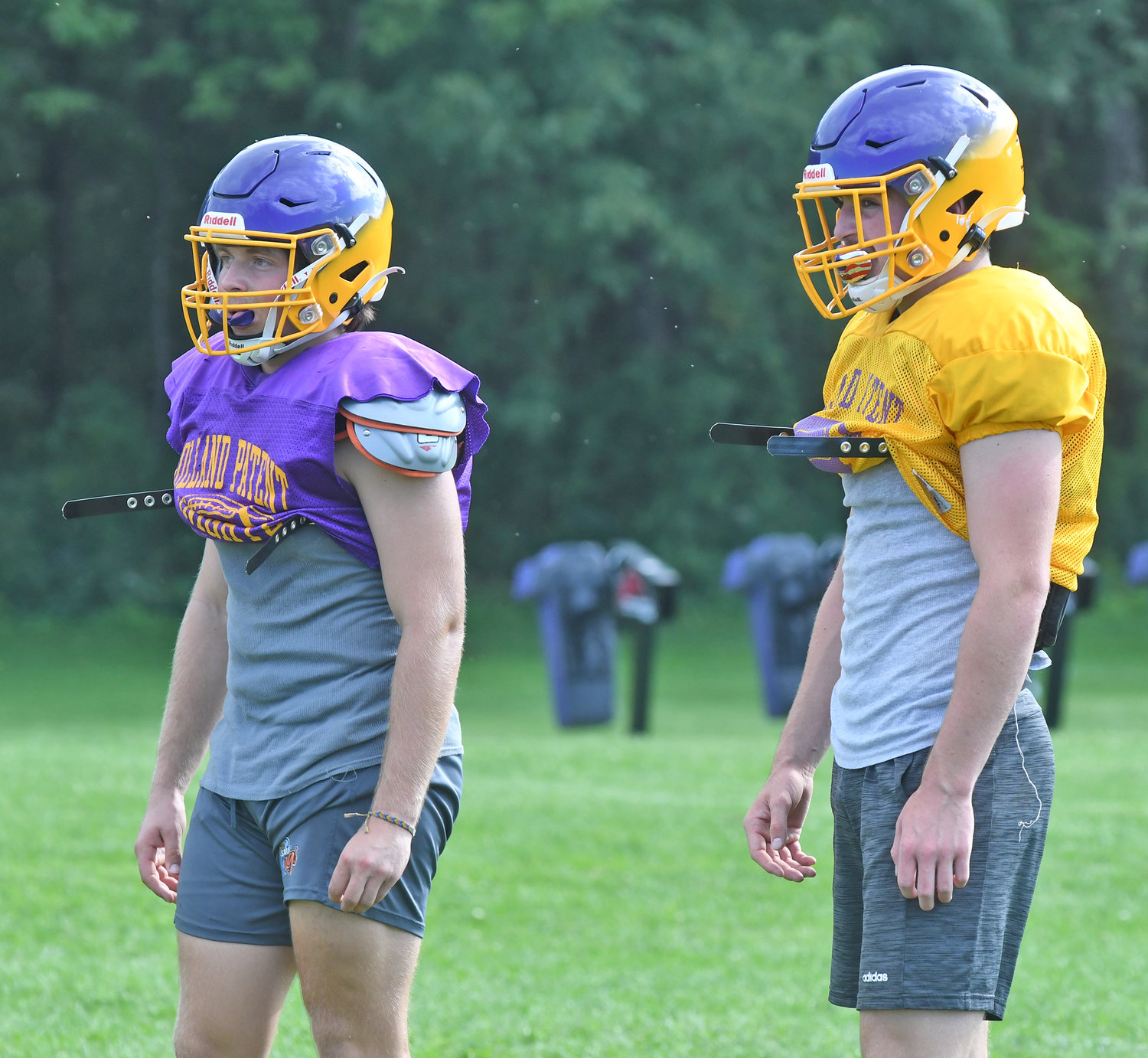 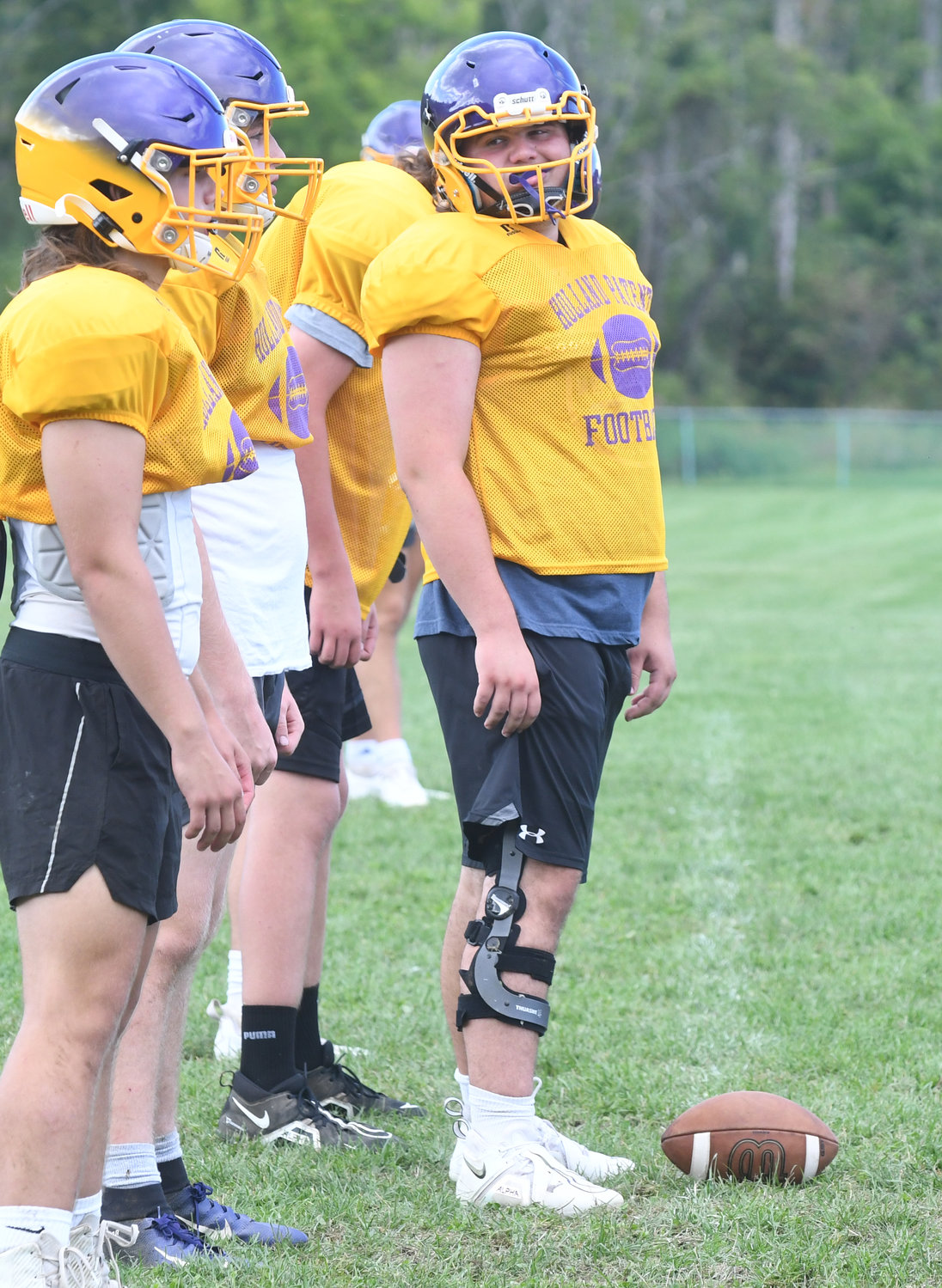 Holland Patent center Alex McLaughlin looks back at the rest of the offensive line before a play starts during practice at the high school in preseason. McLaughlin is one of 18 seniors on the team that boasts a roster of 44.
(Sentinel photo by John Clifford) 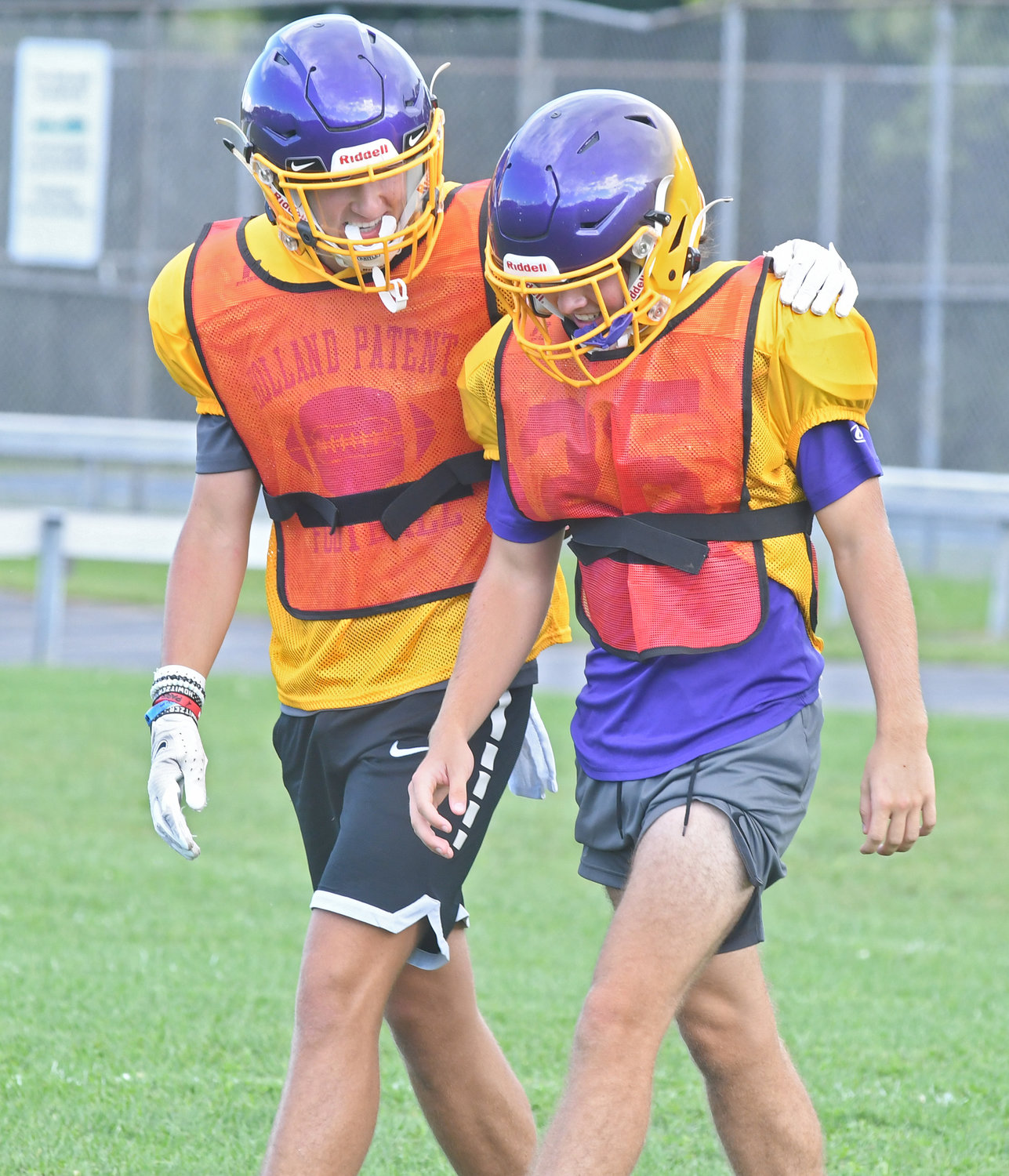 Holland Patent juniors Nick Acevedo, left, and Alex Hoole talk about coverage as they walk back to the huddle during defensive drills at the high school. Acevedo returns as a starting cornerback and Hoole is back at safety.
(Sentinel photo by John Clifford) 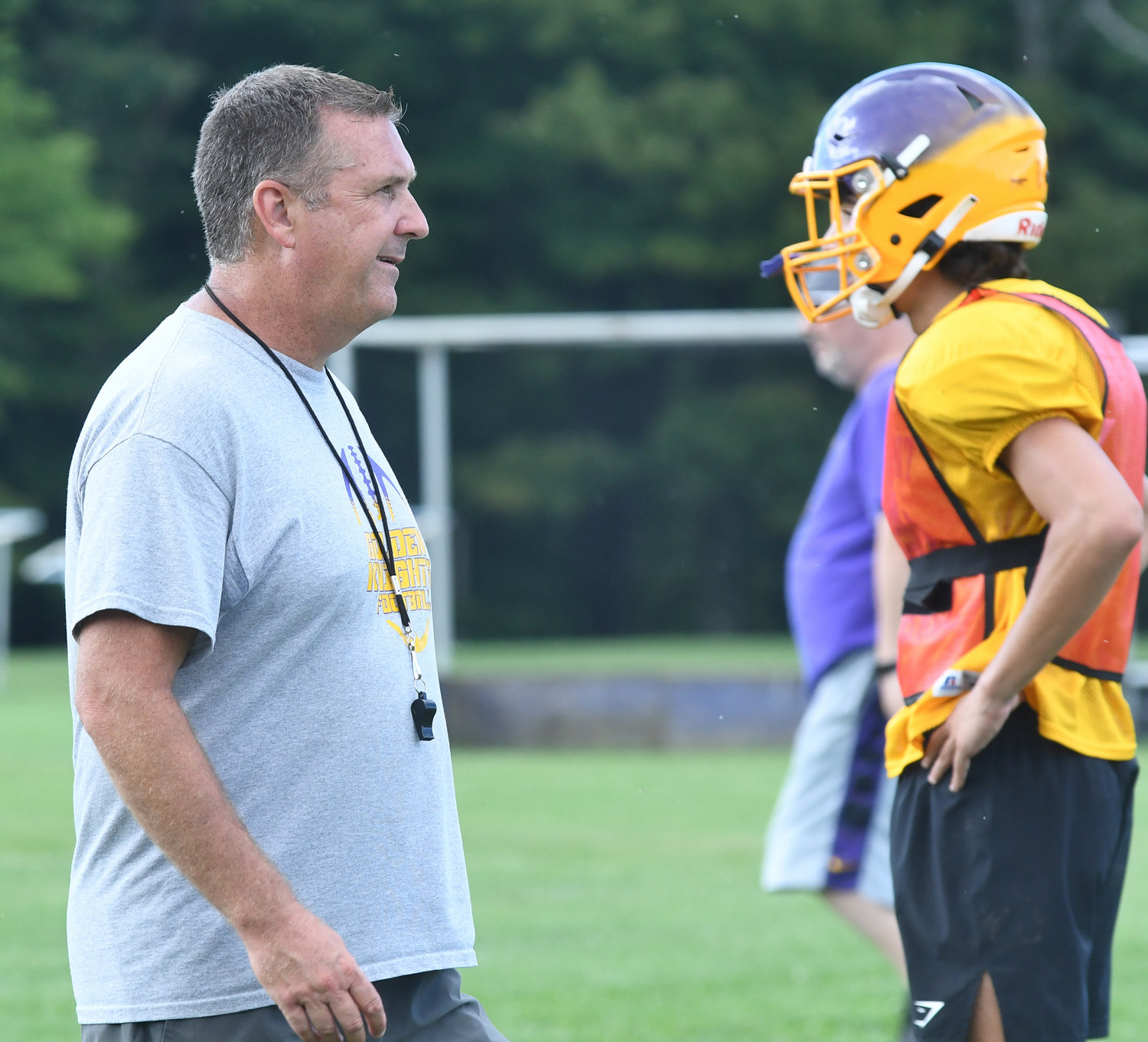 Holland Patent head coach Brian Briggs talks to the team during practice. Briggs is back for his eighth season at his alma mater, and is seeking a second Section III Class C title, having led the Golden Knights to one in 2018.
(Sentinel photo by John Clifford) 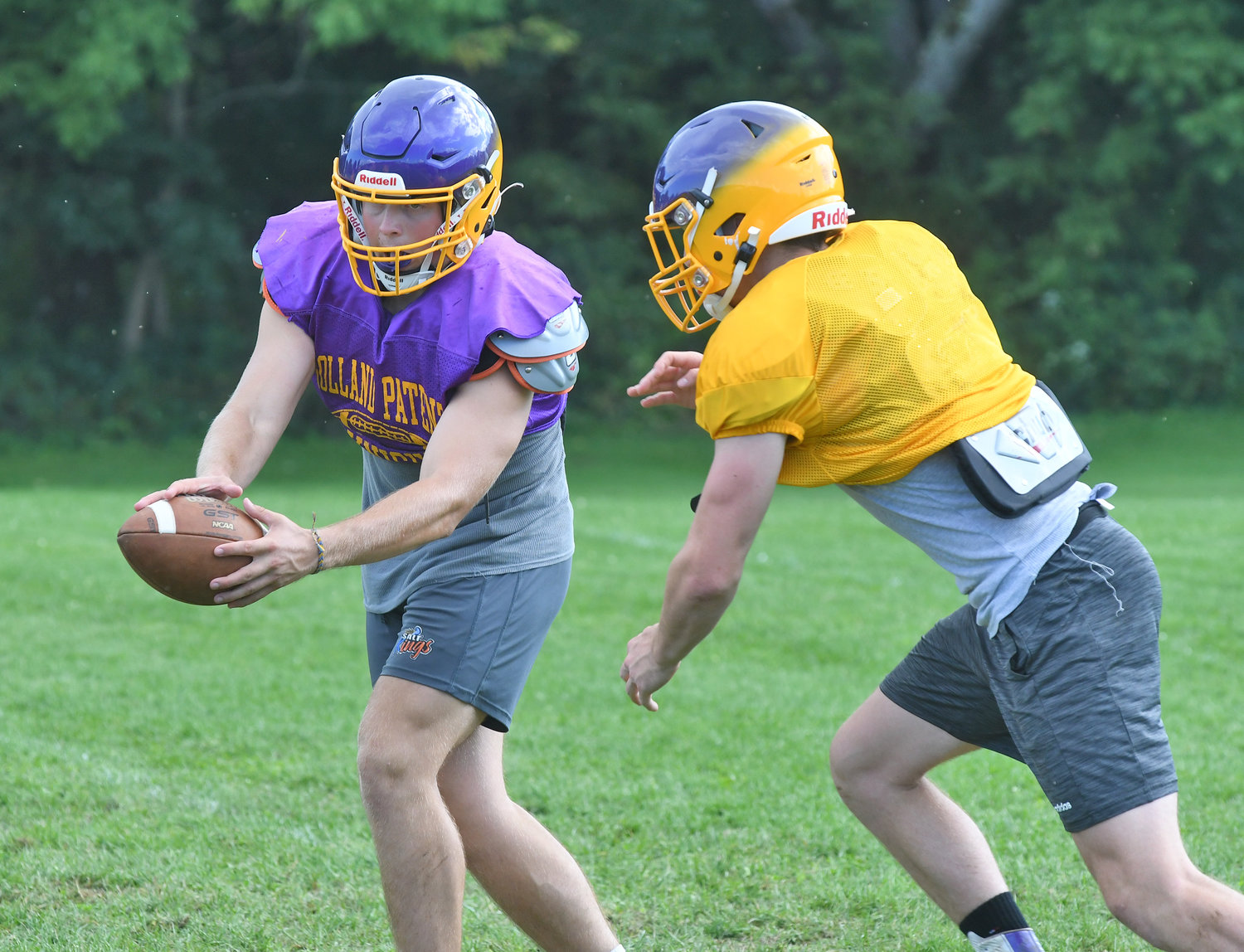 Holland Patent quarterback John Zylynski fakes a handoff to running back Jordan Koenig during practice at the high school during preseason. Zylynski, a senior, shifted to quarterback from running back after an injury to last year's starter Aidan Rubas, during baseball season.
(Sentinel photo by John Clifford) 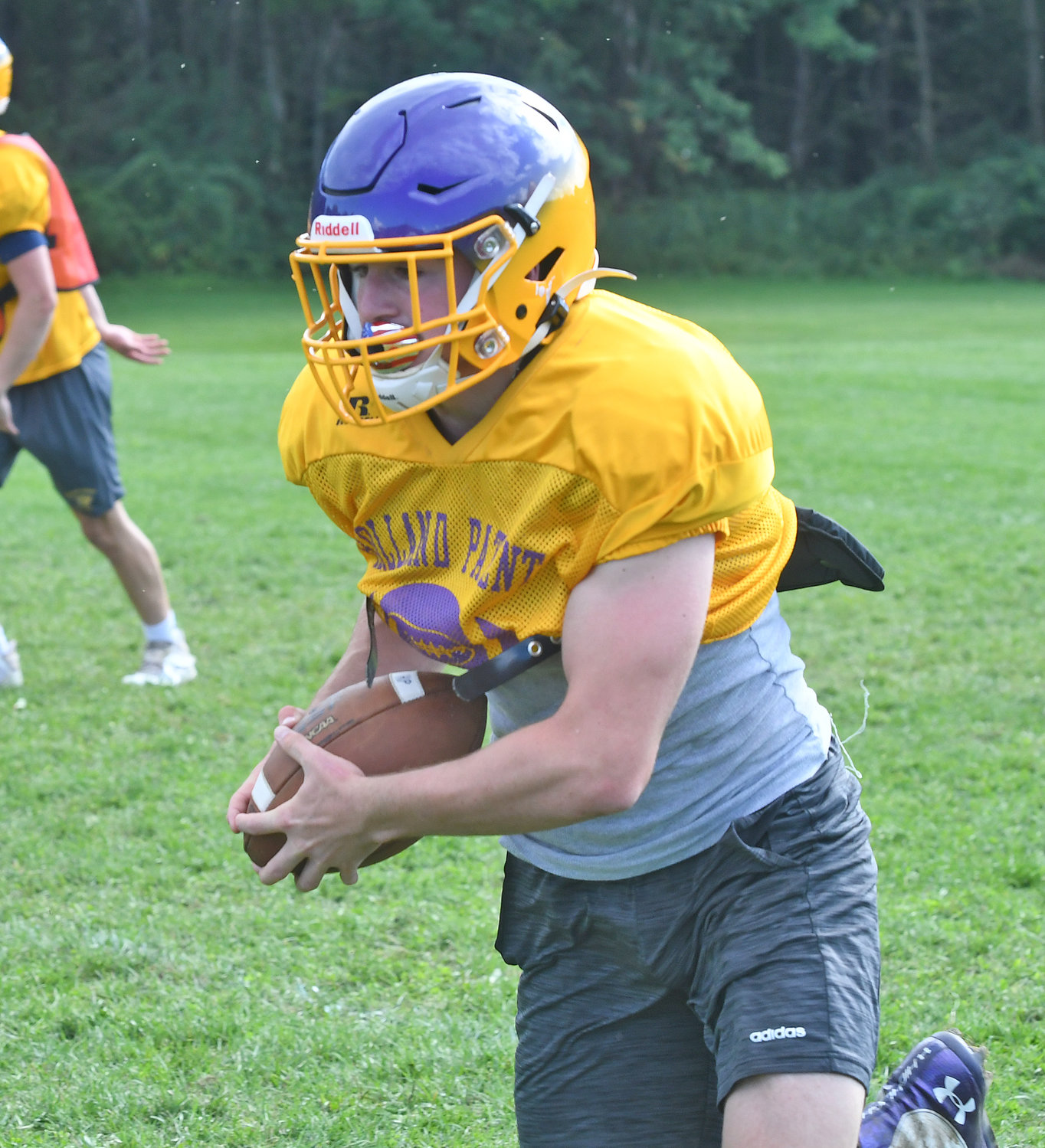 Holland Patent senior running back Jordan Koenig runs after making a catch during practice at the high school in preseason. Koenig is expected to be an impact player on offense and as an inside linebacker on defense.
(Sentinel photo by John Clifford) 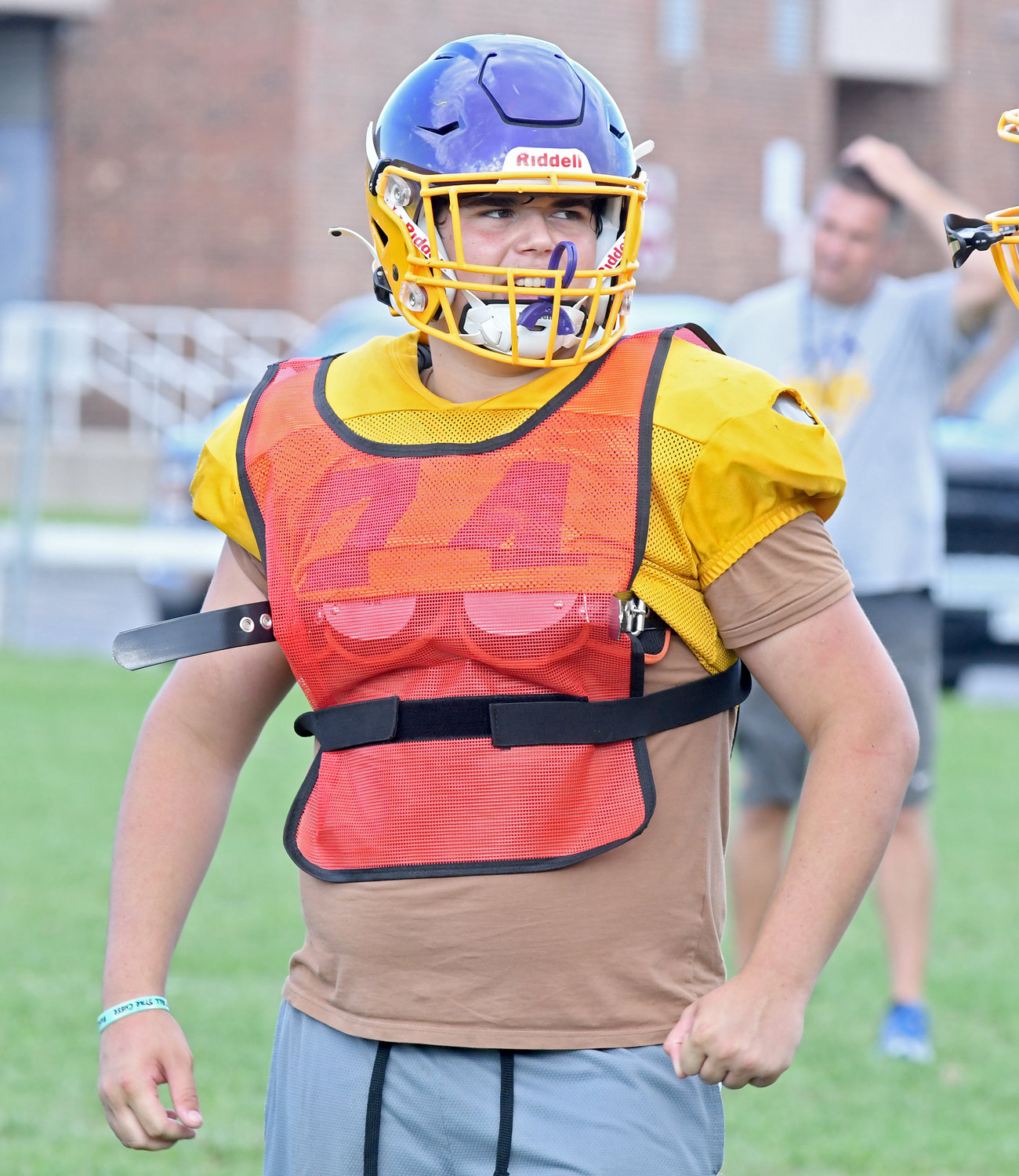 Holland Patent lineman Melby Sann during practice at the high school. Sann, a junior, is likely to be in the mix at guard on offensive and tackle on defense.
(Sentinel photo by John Clifford)
Previous Next
Posted Saturday, September 10, 2022 12:00 pm
Holland Patent’s football schedule

HOLLAND PATENT — The last player on the roster of Holland Patent’s Section III title-winning football team has graduated, leaving a roster full of players looking to make their own history for the Golden Knights.

Head coach Brian Briggs enters his eighth season in charge. His team was 5-2 last season, with a loss to Cazenovia in the Class C quarterfinals to end the campaign.

This year, the team opened with a home game on Sept. 3, against non-league opponent Herkimer and rolled to a 51-7 win.

Lost to graduation is Briggs’ son Caden, the only player from the Class of 2022 who was on the roster in 2018 when the school won its last section title, defeating General Brown in Class C. He was a receiver, defensive back and kicker for the Knights. Other key contributers last season as seniors were tight end Maddox Williams, linemen Andrew Morris and Wyatt Poynter, receiver-defensive back Adam Jones and outside linebacker Ryan Mierek.

“Those guys were leaders on last year’s team, especially Ryan Mierek, who led the team in tackles last year,” coach Briggs said. “The special teams void with Caden being gone will hurt. Morris anchored the line. Maddox Williams was probably our leading receiver.”

There are plenty of players who can step up to replace them, Briggs noted. “This is the biggest team I’ve ever had.” There are 44 players on the roster. With 18 seniors, “it’s a much older team.” There are seven offensive and seven defensive starters back from last fall.

The team is without last year’s starting quarterback, Aidan Rubas, who suffered an injury in the spring during baseball as a sophomore. So the team has moved senior Jonathon Zylynski from running back to quarterback. The dual threat — a runner and passer — “will be dangerous,” the coach said. And his inexperience at quarterback will not mean dialing down the high speed HP offense. “We’re still running a spread offense,” Briggs said. Zylynski will probably have more read options and run pass options to take advantage of his skills. “He’s going to make the decision and go.”

Joining Zylynski as a four-year starter who will be key to the offense is senior Jordan Koenig. The power runner was a third team all-state selection last fall then wrestled his way to a third place finish in the state tournament at 172 pounds in the winter. “I think he’s going to have a huge year. He’s an animal,” Briggs said.

Back after a year off from football is junior Joe Latella, a track and field sprinter. Junior Nick Acevedo and senior Adam Stowell could also earn some carries. The other running backs are sophomores Zach Meyer, Noah Rivera, Chris Siriano and Will Richardson.

Junior Alex Hoole returns as a wide receiver. He’ll be joined by Carhart and six-foot-four senior Chad Clark. The team also moved senior Nick Deforest to tight end to prepare him for a possible role there at the college level, Briggs noted. Also at the position are senior Mike Romeo and sophomore Shaun Dziedzic — both six-foot-three.

Senior Alex McLaughlin shifts to center from guard on the offensive line. The guards likely to get the most snaps are seniors David Bolin, Levi Nimey and Zion Snyder and junior Melby Sann. The tackles will likely be returning starters Nathan Craver and Trenton Stockhauser, both juniors. “They’re experienced,” Briggs noted. Senior Matt Lux could also be in the mix as an athletic player new to football.

“It’s going to be a good defense,” said Briggs about the other side of the football. “It’s going to be tough for teams to run on,” with good coverage and edge rush to shut down the passing game. The team will rely on the wealth of experience at linebacker and cornerback, especially Deforest at linebacker.

On the line, Amidon and Snyder will compete for time at defensive end, with Deforest dropping down to end at the other side often. Craver and Nimey will likely get most of the time at tackle, with Sann in the mix too.

Zylynski and Koenig are the inside linebackers. Posello, Stowell and Stockhauser will be on the outside in one combination or another.

Acevedo returns as a starter at cornerback, with Kelly and Anthony Phan competing for the other spot. Capodiferro will also have the chance to make an impact. Returning starter Hoole and Clark will be the safeties.

But first the Knights have to get through the Class C regular season. “Class C is loaded,” Briggs said. “It’s not going to be easy.” Vernon-Verona-Sherrill has dropped down from Class B. Adirondack is up from Class D after a successful season. Westmoreland/Oriskany has had plenty of success under a veteran coaching staff. General Brown and Lowville are always tough in the league, he noted. “We went 5-2 last year and lost to Cazenovia in the sectionals but it could have gone either way.” He said he’s not sure what the league thinks HP is capable of this year. But he said the team had a good off-season, with almost every player ready to run plays the first day of preseason practice. “Sometimes it’s good to be under the radar,” the coach said.

The Knights open against a Class D opponent, but the Magicians return with many starters from 2021, Briggs said. “We’ll see how we come out of the gate and score points and how we hold them.”