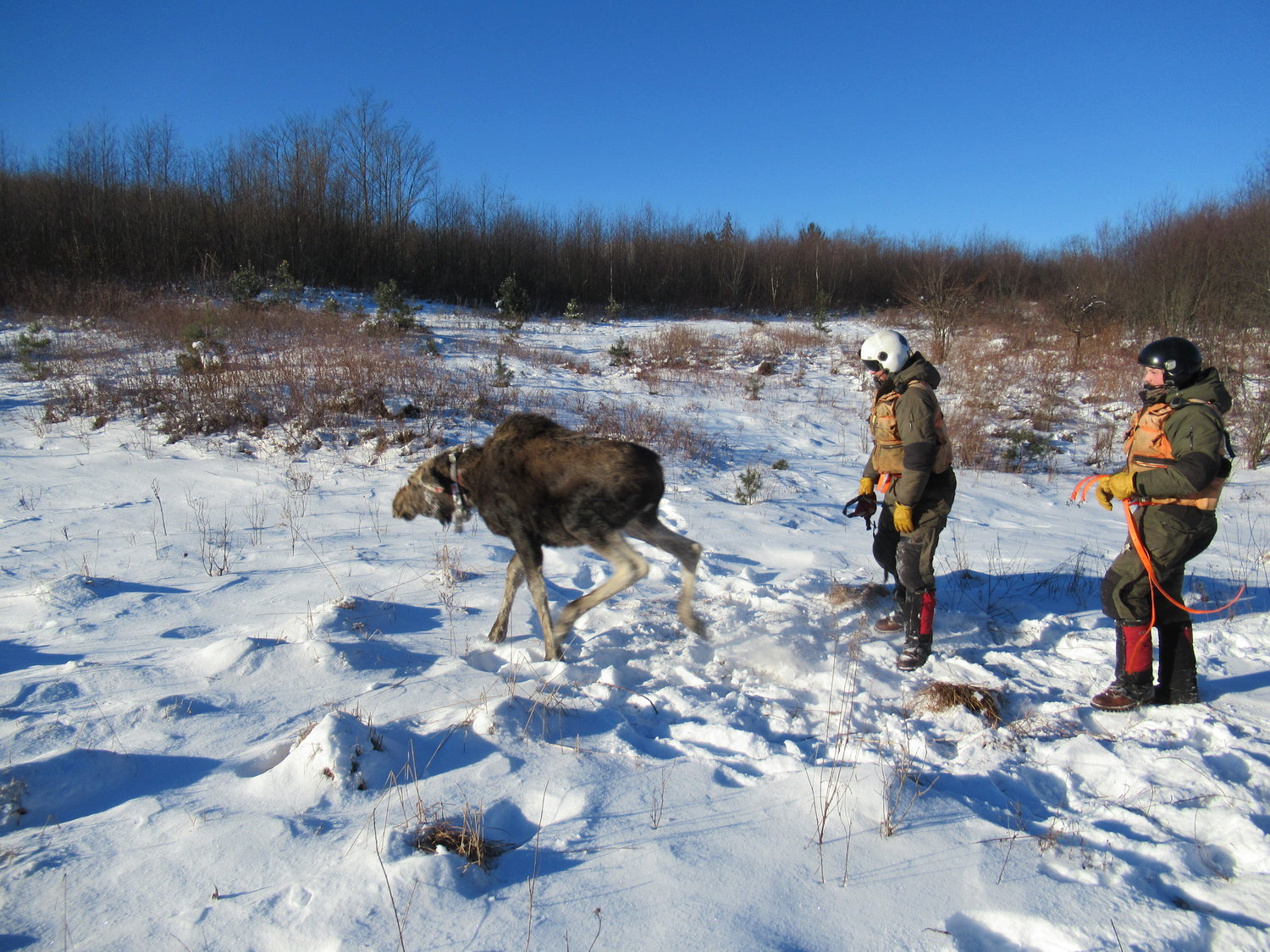 CATCH YOU AGAIN LATER — A moose calf trots away in the Adirondacks after being tagged with a GPS collar by researchers recently. In a project led by the state Department of Environmental Conservation and several partners, researchers are hoping to learn more about the creatures and their efforts to survive in the Empire State.
(Photo courtesy NYSDEC) 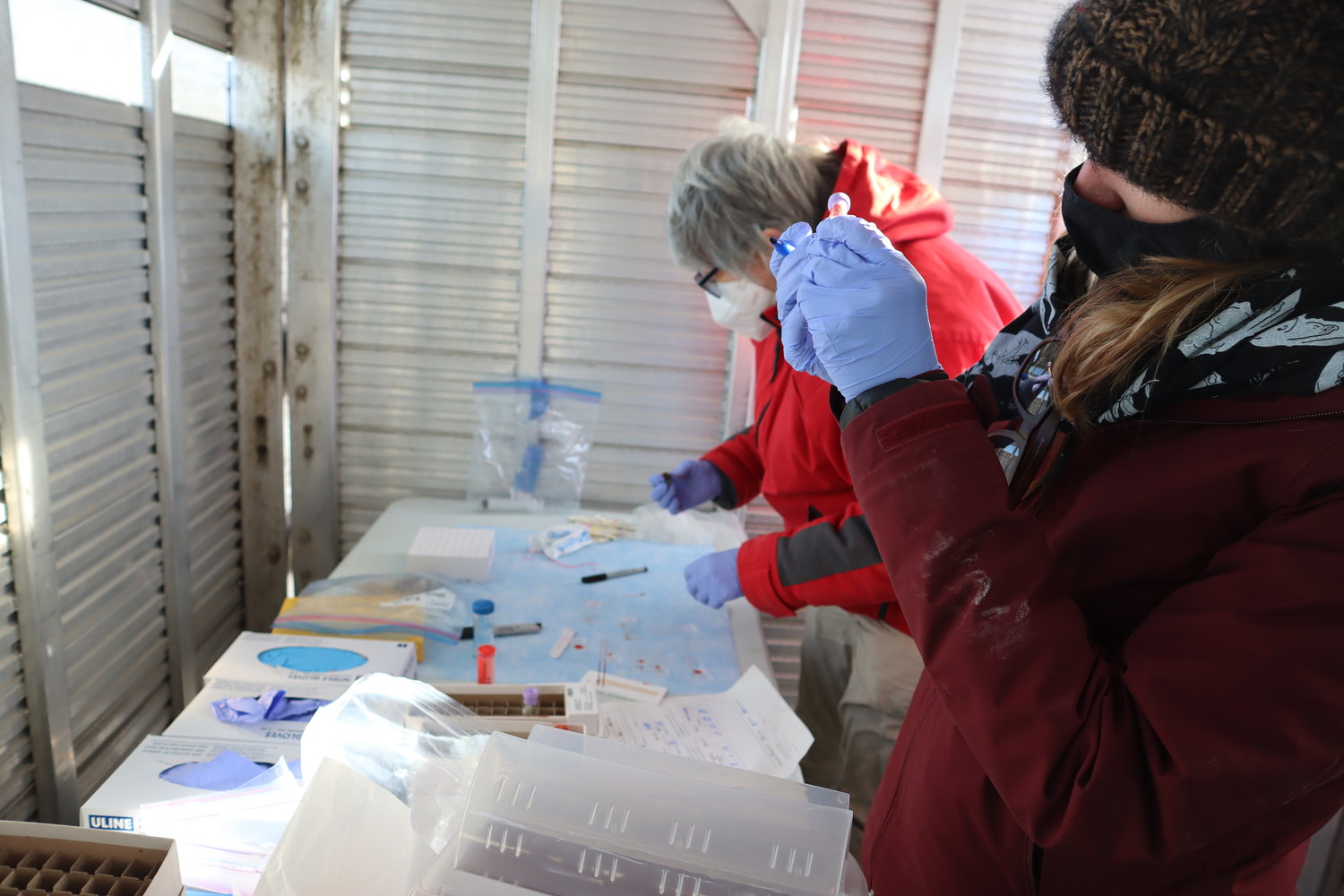 ALBANY — After tracking down more than a dozen moose and fitting them with transmitter collars, the state Department of Environmental Conservation has begun a new research project in the Adirondacks aimed at collecting valuable data about New York’s moose population.

This winter, 14 moose were fitted with Global Positioning System (GPS) collars as part of a multi-year project assessing moose health and population. To safely capture, collar, and monitor these animals, the DEC partnered with researchers at the New York Cooperative Fish and Wildlife Research Unit and the College of Veterinary Medicine at Cornell University, the State University of New York College of Environmental Science and Forestry and Native Range Capture Services.

“New York’s storied moose population, which began its recovery in the 1980s, is a critical part of our state’s biodiversity,” said DEC Commissioner Basil Seggos in a statement. “DEC’s new research partnership will collect valuable data to help us better understand these fascinating animals and guide management for moose in the Adirondacks and across their range.”

“The moose population in New York is at the southern edge of their range in the United States and has not grown as expected since moose recolonized the State in the 1980s,”said Angela Fuller, Cornell University Professor and U.S.G.S. New York Cooperative Fish and Wildlife Research Unit Leader. “We have a fantastic collaborative research team focused on unraveling the complex factors that could be limiting moose population growth. Information from the GPS collared moose calves, paired with data collected on parasites and predators of calves will allow us to better understand threats to survival and moose health.”

Moose entered the state on a continuous basis in the 1980s, having been absent since the 1860s.

DEC biologists estimated that there are roughly 600-700 moose in the Adirondack Region as of 2018. Occasional sightings of moose outside of the North Country have been reported, but they remain relatively rare. Most recently, a bull moose was seen in the Boonville area in September, ambling down Route 46 before disappearing back into the woods.

The DEC said the GPS collars will provide location data and information on moose activity patterns, movements, and mortality. Data collected as part of this research effort will contribute directly to the continued management of moose in New York.

Previous moose research in the Adirondacks has helped researchers better understand adult moose survival and reproduction, but little is known about calf survival and dispersal in New York. By collaring calves and monitoring their survival to adulthood, biologists will be able to investigate factors limiting moose population growth such as the effects of parasites on juvenile moose survival. These parasites, including winter ticks, brain worm, and giant liver fluke, and their associated diseases have increasingly become a management concern in the northeast and elsewhere.

“Moose health is a critical issue across many moose populations, including the Adirondacks,” said Krysten Schuler, wildlife disease ecologist and co-director of the Cornell Wildlife Health Lab in a statement. “Through previous work, we identified emerging health issues and are now excited to test hypotheses about the influence of parasites on juvenile moose survival.”

The research is funded by a Federal Aid in Wildlife Restoration grant through the U.S. Fish and Wildlife Service. These funds are collected through federal excise taxes on firearms, ammunition, and archery equipment and then apportioned to states for wildlife conservation.

The project also includes sampling white-tailed deer pellets and water sources to detect and better understand the prevalence and distribution of brain worm and giant liver fluke across the landscape. Larvae from these parasites are found in deer scat, where they are picked up by snails and then incidentally consumed by moose as they forage on plants. Biologists also deployed trail cameras this past fall to determine range overlap between deer and moose and monitor hair loss on moose infested with winter ticks.

The moose is the biggest member of the deer family and the largest land mammal in the state. Bulls can weigh between 600 and 1,200 pounds and stand up to 6 feet tall at the shoulder. Cows weigh from 500 to 800 pounds. Both sexes have long, grayish-white legs, dark brown or black bodies, and a dangling flap of skin under the throat called a bell, according to the DEC. A mature bull’s bell is much larger than those of cows and younger bulls while cows have light brown faces and a white patch of skin under their tails, while bulls have dark faces and no white patch, the DEC adds.

Only bulls grow antlers, beginning in March or April. The antlers, which regrow annually, may reach a width of more than 5 feet on mature bulls and are shed from November through January, the DEC said.

For additional information about moose biology, current research, or to report moose sightings, visit the DEC’s website at https://www.dec.ny.gov/animals/6964.html.