The Utica Comets lost a key player from last season’s successful team for the second time in as many days. 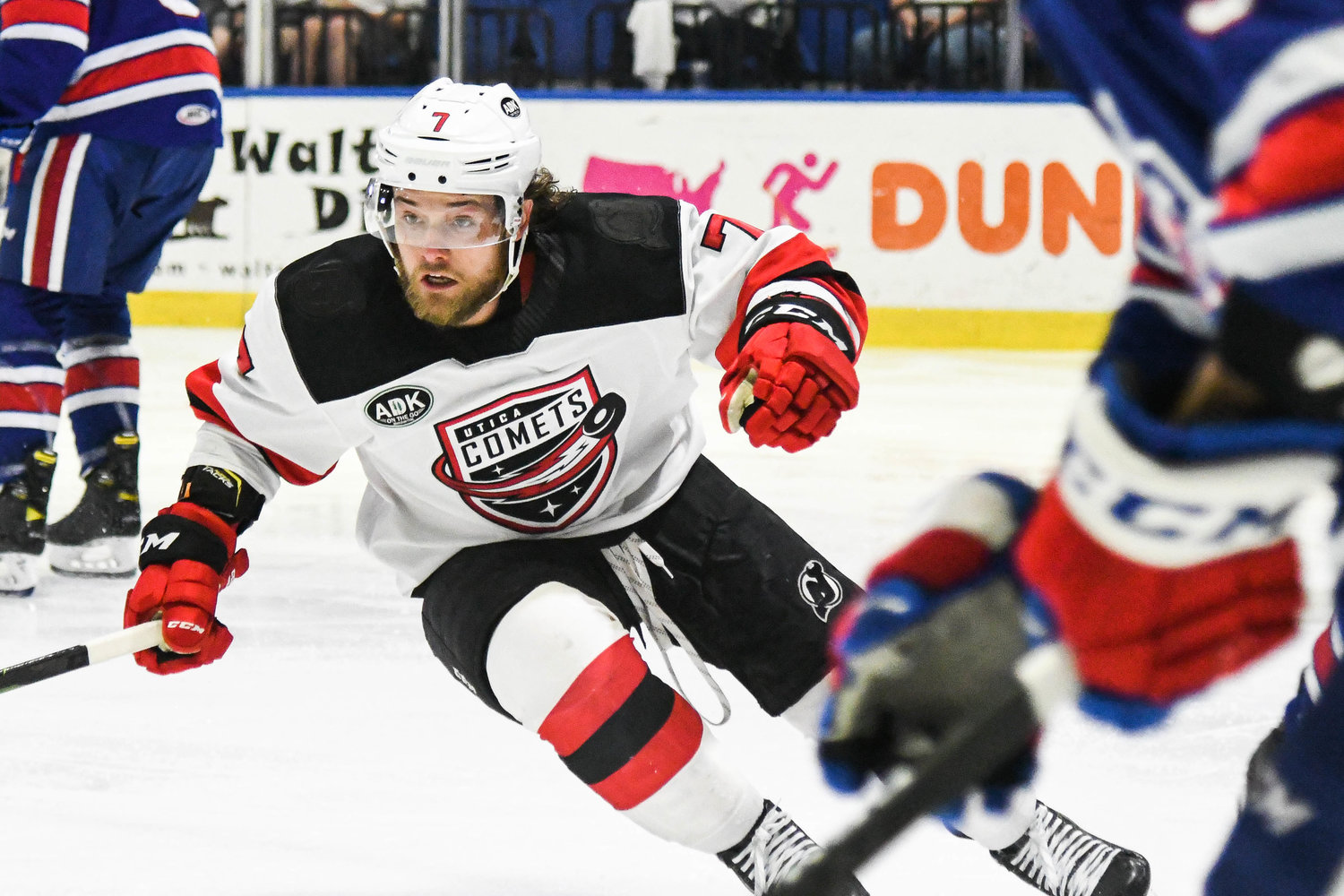 Chase De Leo looks to make a play during a playoff game against the Rochester Americans last season. De Leo was a point-per-game player with 56 points in 55 games with the Comets. He re-signed with the Anaheim Ducks on Thursday, inking a two-year deal.
(Sentinel photo by Alex Cooper)
Posted Friday, July 15, 2022 9:12 am
Ben Birnell
Sports writer
email / twitter

The Utica Comets lost a key player from last season’s successful team for the second time in as many days.

On Thursday, skilled forward Chase De Leo re-signed with the Anaheim Ducks following a career-season as the Comets’ leading scorer. The Ducks said it was a two-year deal for De Leo, who previously played three seasons in the organization before signing with the Comets’ new NHL affiliate, New Jersey, last summer. He’s due to make at least $350,000 should he play in the AHL in either of the next two seasons, according to hockey contract resource capfriendly.com. He made $300,000 while playing for Utica last season.

De Leo — an unrestricted free agent after the season ended — is the latest to sign outside of the organization after team MVP A.J. Greer signed with Boston on the first day of free agency Wednesday. Defenseman Colton White, who had been part of the New Jersey organization since 2017-18 and played six games with Utica last season, also signed with Anaheim.

There’s always changes to an AHL team’s roster as Comets fans have learned since an AHL team returned in 2013. The loss of De Leo and Greer represents a loss of two top-five scorers that will need to be replaced for the 2022-23 season. De Leo and Greer combined for 43 goals and 108 points. Both were point-per-game players for the Comets while playing top-6 roles and showing NHL potential.

De Leo’s career-best 56 points led the Comets and put him in consideration for the team’s MVP honor. The points rank sixth-best in the team history for a single-season.

The 26-year-old De Leo’s return to the Anaheim organization isn’t surprising given he’s from the area and his family has a farm there. De Leo has played 157 of his 427 pro games with either Anaheim or its AHL affiliate, San Diego. He played the first three seasons of his career with the Winnipeg Jets organization.

As for early Thursday evening, the Devils had not announced the signings of any players who could see time with Utica during the team’s 10th season. There had been reports Wednesday of at least four players either signed or given extensions with the organization.

One player that the Devils did announce has been signed is second overall pick in the recent NHL draft Simon Nemec.

The 18-year-old defenseman from Slovakia signed a three-year, entry-level contract with an average annual value of $950,000. Nemec is currently attending New Jersey’s Development Camp in Newark.

The right-handed Nemec had 26 points last season, which ranked ranked second among his team’s defensemen in Slovakia’s top professional league.

It is possible he could see time with Utica next season. New Jersey General Manager Tom Fitzgerald has said that is possible Nemec could play with the AHL affiliate.