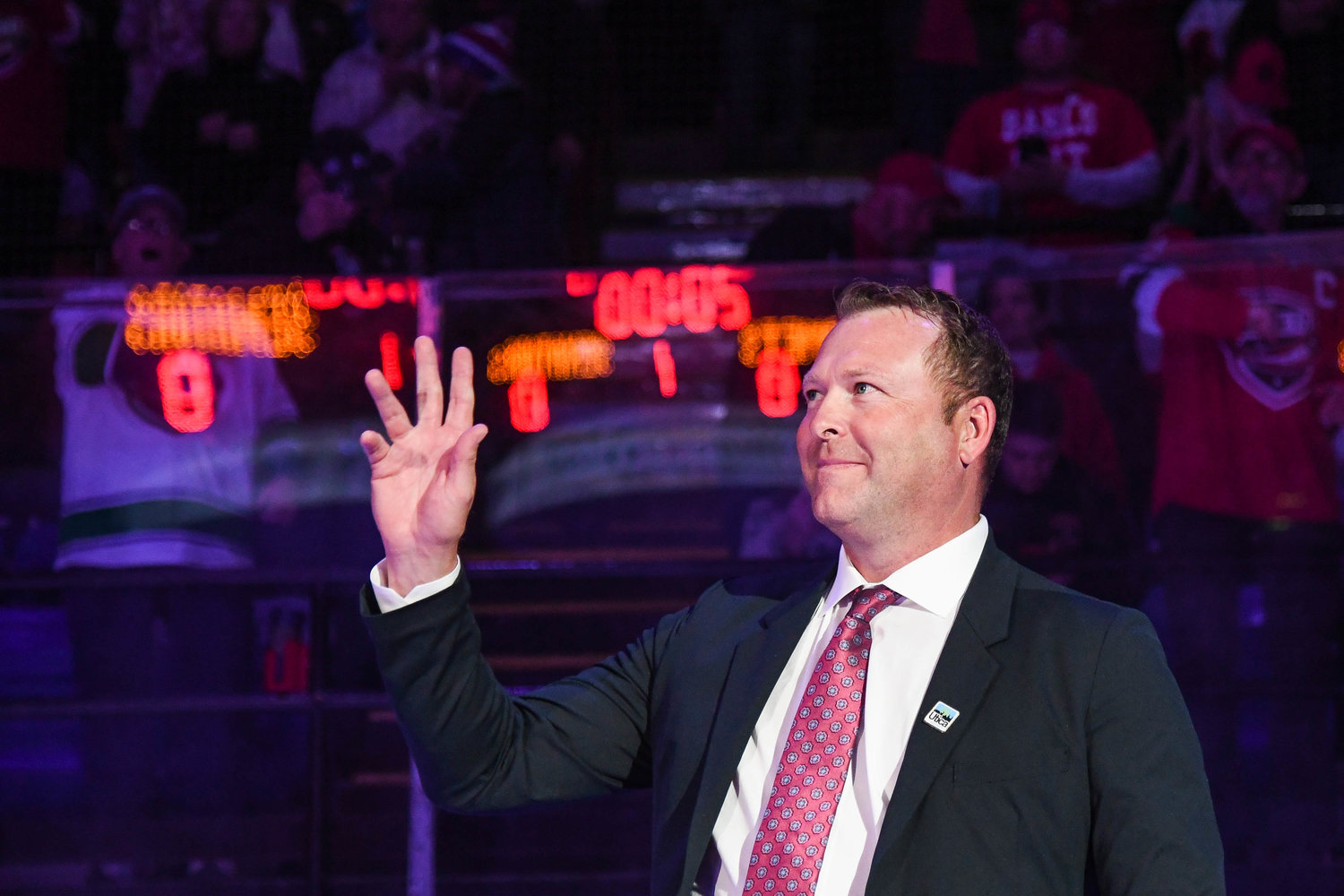 BACK WHERE IT STARTED — Hall of Fame goaltender Martin Brodeur waves to the crowd before dropping the puck to start the AHL game against the Belleville Senators on Wednesday night at the Adirondack Back Center at the Utica Memorial Auditorium. Fans were also given a Brodeur bobblehead at the game.
(Sentinel photo by Alex Cooper) 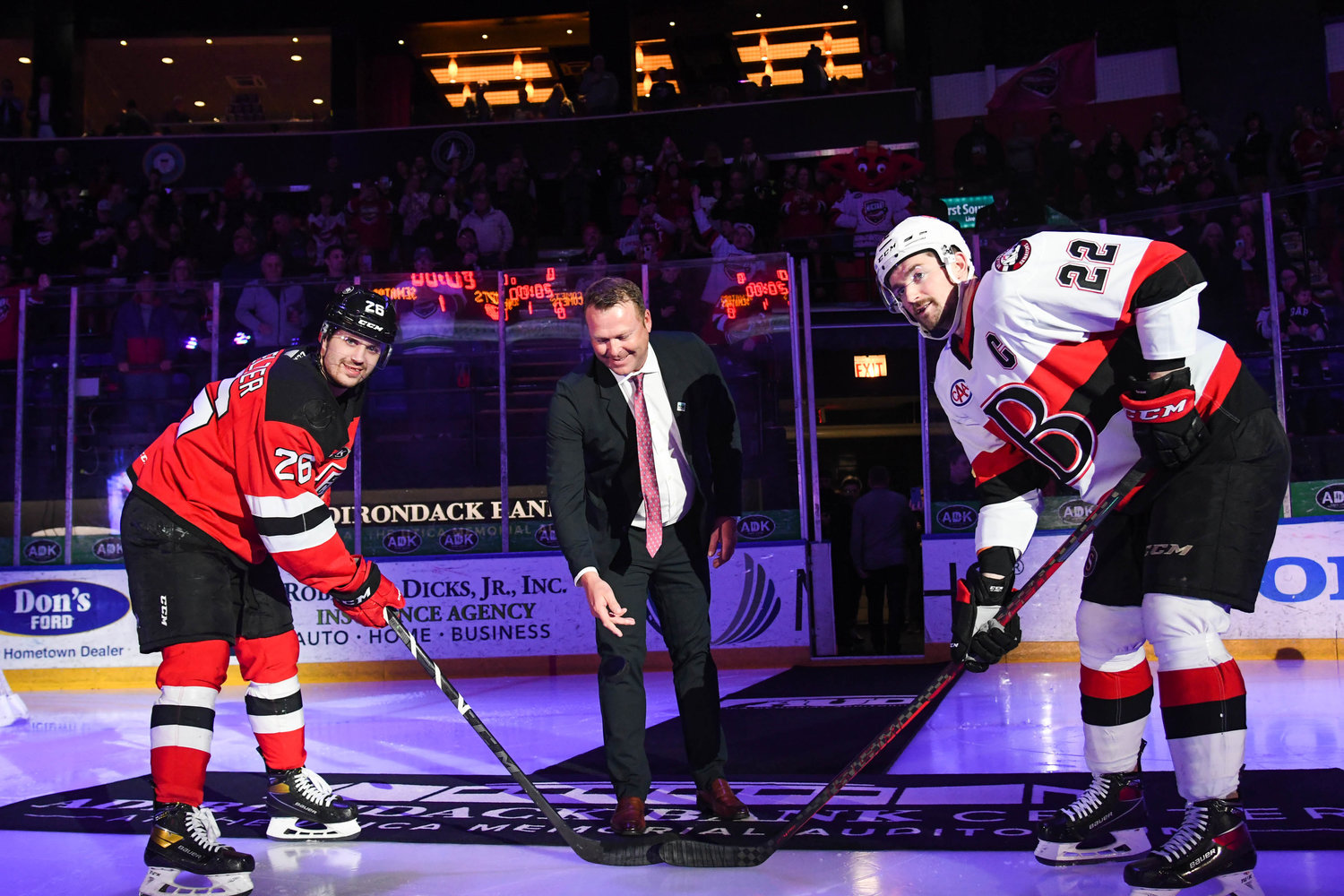 DROP THE PUCK — Hall of Fame goaltender Martin Brodeur drops the puck to start the AHL game between the Utica Comets and the Belleville Senators on Wednesday night in Utica.
(Sentinel photo by Alex Cooper) 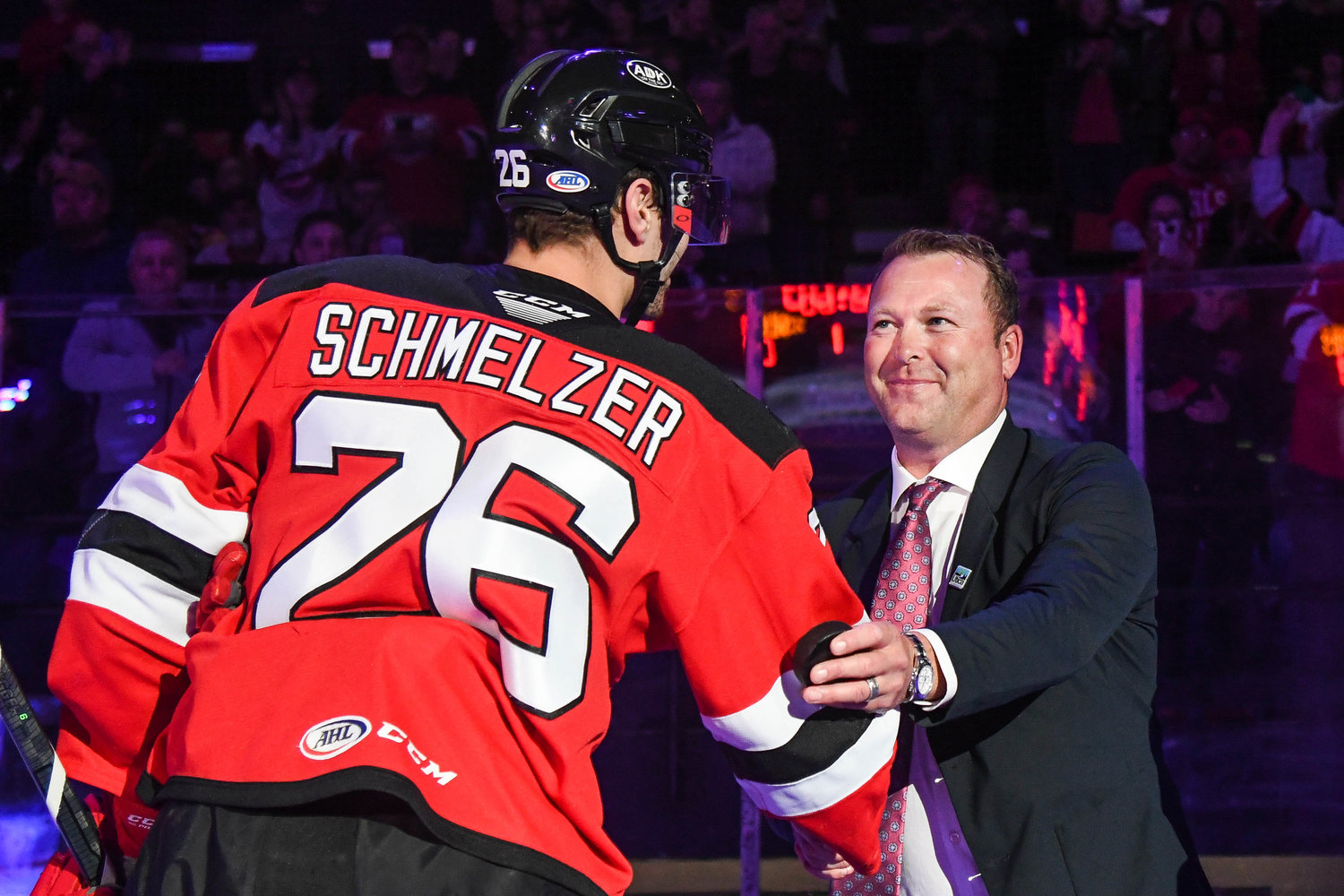 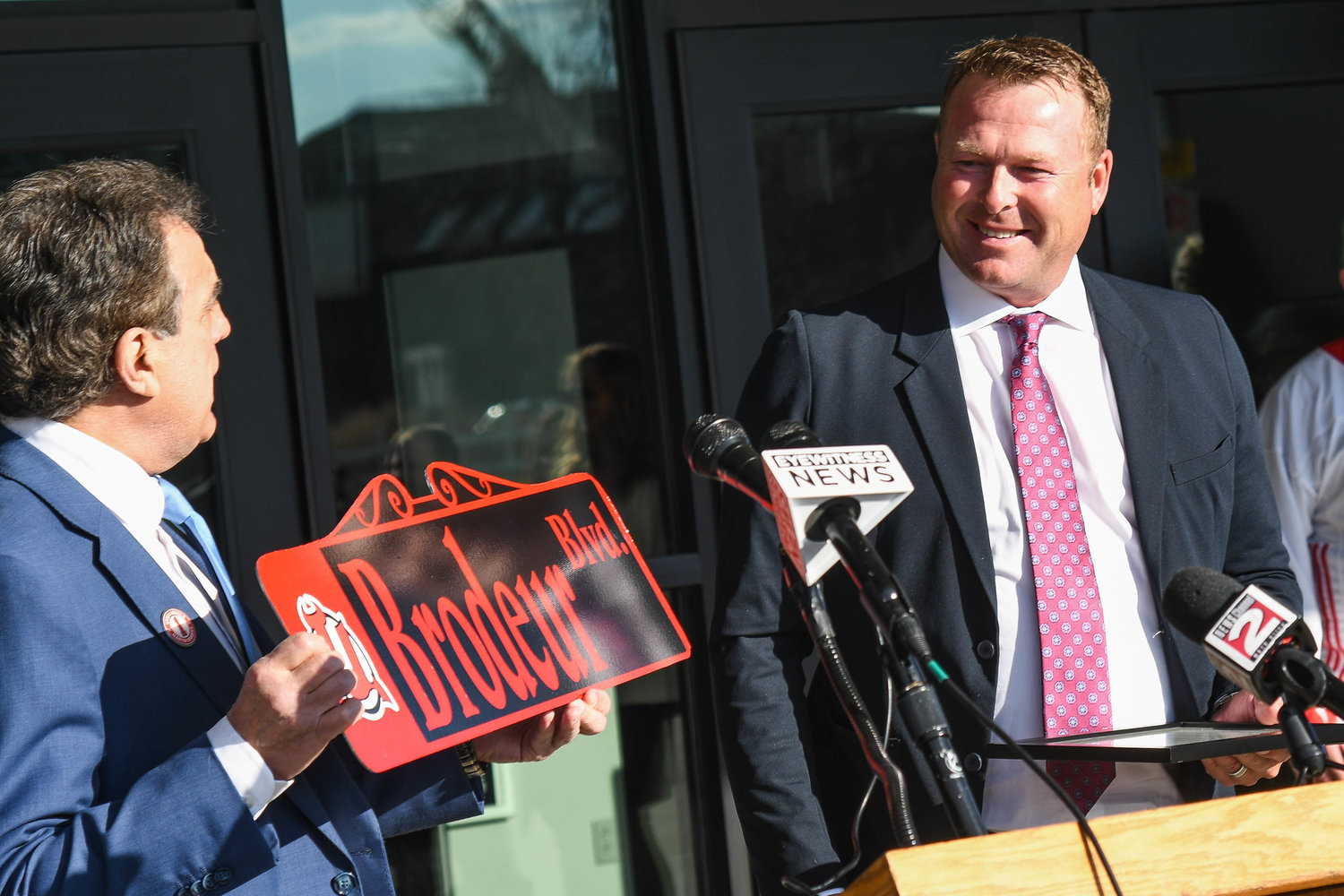 UTICA — Martin Brodeur remembers much about his season here as a rookie en route to his eventual Hall of Fame goaltending career.

“Well, there was a lot of snow,” said the 49-year-old Brodeur on Wednesday in front of small crowd of Utica Comets fans before a game against Belleville. “I have good memories. Robbie Ftorek was our coach in (1992-93 with the Utica Devils). He was the lone coach back then. It was a lot different. My partner was Corey Schwab and we alternated games. My development was a little bit slow in Utica. I was young, I was 20 years old. I was able to sit back and take in what a pro hockey player is. I came in to Utica not speaking that much English. I understood everything, but I kind of pretended I didn’t understand everything. That made my life easier. But, I had a great time.”

Brodeur, considered one of the greatest goaltenders in hockey history, returned to Utica’s downtown arena as part of a night honoring the most well-known player to suit up for the Utica Devils, which was then the New Jersey Devils’ AHL affiliate.

As part of the game, all fans – many sporting Brodeur jerseys – were given a bobblehead featuring the goalie sporting a No. 1 jersey with the Utica Devils logo.

Brodeur also dropped the ceremonial puck before the game with fans chanting his name.

Here’s an exclusive Q&A with Brodeur that he did with the Daily Sentinel:

Q: After you’ve walked around a little bit, what do you think of all the changes to the arena?

A: It is kind of a surprising a little bit when you come in so many years later and it is the same building, but it is totally different. When I played, the fan base was not as big as what it is now. Credit to them over the last 6 or 7 years to build the fan base. I was just in the locker room and it is kind of mind-boggling and I have a hard time putting it together how it looked before. Even the surrounding area is a lot different.

Q: Now that you’re back do all the memories you had come back?

A: It was an important year for my development in my career was spending time in Utica. It is always going to be part of it. For us to get back as an organization, I think it is great. … When we were talking about the (affiliation change) last summer, it put a smile on my face because it is a place that I played before.

Q: What impresses you about the team this year?

A: I think they’re extremely well-coached. There’s a good balance. I think (Comets General Manager) Dan MacKinnon did a great job with our prospects. At the end of the day, you need solid veteran leadership on this team. I think that’s the reason why you see the success. You have the older guys succeeding, but the prospects are also making an impact. … Just to show the depth, we have had to call up a lot guys from the organization and you can see they haven’t missed too much of a beat.

Q: Obviously, it has been a different year for young goaltenders Akira Schmid and Nico Daws. What have you seen from their development?

A: I think it has been great. Both have had a chance to go to the NHL, obviously Nico a lot more. Just by his performance, I think he’s been a bit more ready. We feel they should be in the AHL. They’re not ready. But circumstances made it happen this season. … But, we like what we see. Obviously, when they played a lot here and there was a regular schedule they were dominant. It got kind of screwed up a little bit, but you can see more ebb and flows in the way they play. I think that’s just normal. …

Q: Was there a moment for you when you were here that helped it click for you?

A: We didn’t have a really good team. We had a lot of work. I took pride in trying to stay above .500. … I didn’t think I was really ready for the NHL at that point. I had a good summer and got an opportunity. I was able to get in the net and show what I could do. Spending that whole year, playing and learning to be a pro. All that stuff was really important. I feel it was a big step for me to be here. … That one year was really helpful to me.