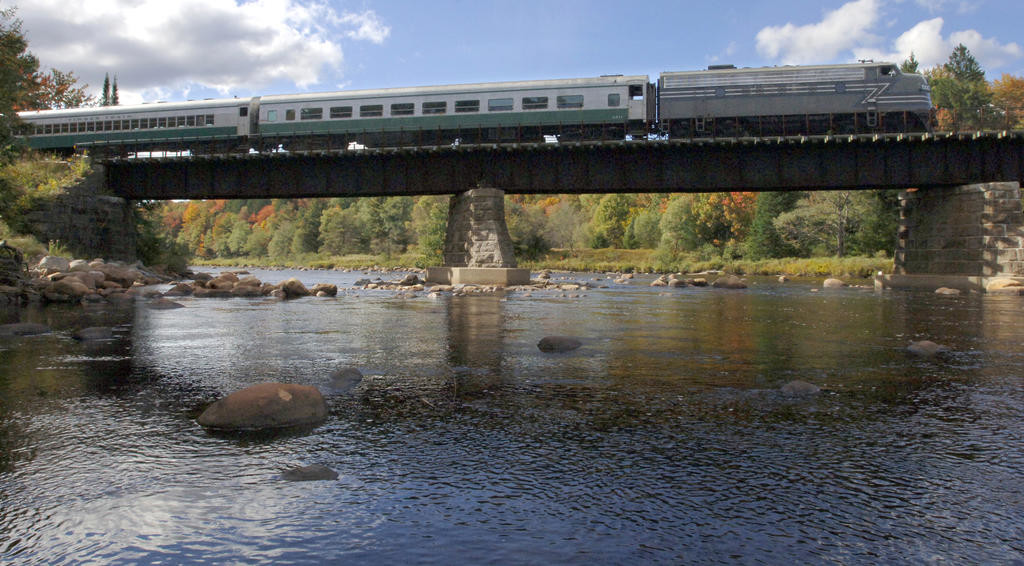 STOPPED IN ITS TRACKS? — The Adirondack Scenic Railroad crosses a trestle over the Moose River near McKeever Road in this file photo. The railroad is vowing to fight Gov. Andrew Cuomo’s approval Tuesday of a $23 million plan to convert 34 miles of a state-owned rail corridor to a multi-use trail. (Sentinel photo by John Clifford)
Posted Wednesday, May 18, 2016 4:10 pm

Gov. Andrew Cuomo has approved a $23 million plan to convert 34 miles of a state-owned rail corridor to a multi-use trail and renovate 45 miles of tracks to extend the route of the Utica-based Adirondack Scenic Railroad to Tupper Lake.

The work will begin this fall and be completed within three years, Cuomo said Tuesday. The state Olympic Regional Development Authority will have a hand in managing the broad, flat trail that will be used for bicycling, walking, skiing and snowmobiling.

“This long-distance, multi-use recreation trail between Lake Placid and Tupper Lake will complement our facilities like no other here in the Olympic Region,” ORDA President and CEO Ted Blazer said in a news release.

“By rehabilitating the railway and building a scenic trail, we are better utilizing the corridor and its surrounding lands to create more economic and recreational opportunities for residents and visitors alike,” the Democratic governor said.

Not everyone, however, is pleased with the move.

“Over the past several years, I’ve received hundreds of petition signatures from residents of the Mohawk Valley and beyond in support of keeping the railroad line intact from Utica to Lake Placid,” said Assemblyman Anthony J. Brindisi, D-119, Utica.

“Many people have weighed in, making the strong point that there are plenty of opportunities for hiking and outdoor recreation in the Adirondacks, and that we don’t need an additional trail.  Operating rail service from Utica to Lake Placid would open up the entire region to tourists from around the world.  The approval of this management plan for the Adirondack Travel Corridor will effectively stop tourism in its tracks,” he said.

“The plan to end a successful railroad line in Tupper Lake ignores the wishes of many people to have train service extended to Lake Placid, where there are many more things for visitors to do.  The Remsen to Lake Placid rail line is a national historic treasure, and as many people have said, it makes no sense to simply rip up the tracks.  Once this tremendous asset is gone, it is highly unlikely we will ever have it back.  I am extremely disappointed in this decision,” the assemblyman added.

Rail supporters, who lobbied to have the rails upgraded all the way to Lake Placid, are vowing to fight the plan.

“We are going ahead with a court case trying to prove this decision process was not conducted fully above board,” said Bethan Maher, executive director of the nonprofit Adirondack Scenic Railroad. “We firmly believe the maximum economic benefit and tourism potential will be served by extending the railroad to Lake Placid.”

Adirondack Recreational Trail Advocates, a nonprofit group formed in 2010 to promote conversion of 90 miles of the state-owned rail corridor from Old Forge to Lake Placid into a recreation trail, has accepted the state’s compromise to create a 34-mile trail.

“Now our main concern is that it goes ahead quickly,” said ARTA member Richard Beamish of Saranac Lake. “There’s no conceivable reason it couldn’t be completed by the end of next year.”

Cuomo’s news release said the State Historic Preservation Office would examine measures to address the impacts of removing the rails with regards to the corridor’s listing on the National Register of Historic Places.

From staff and wire reports