Culture, history on display during Boxing Hall of Fame weekend

Boxing’s biggest celebration and tribute to its greatest names kicked off Thursday at the Turning Stone Resort Casino.

Culture, history on display during Boxing Hall of Fame weekend 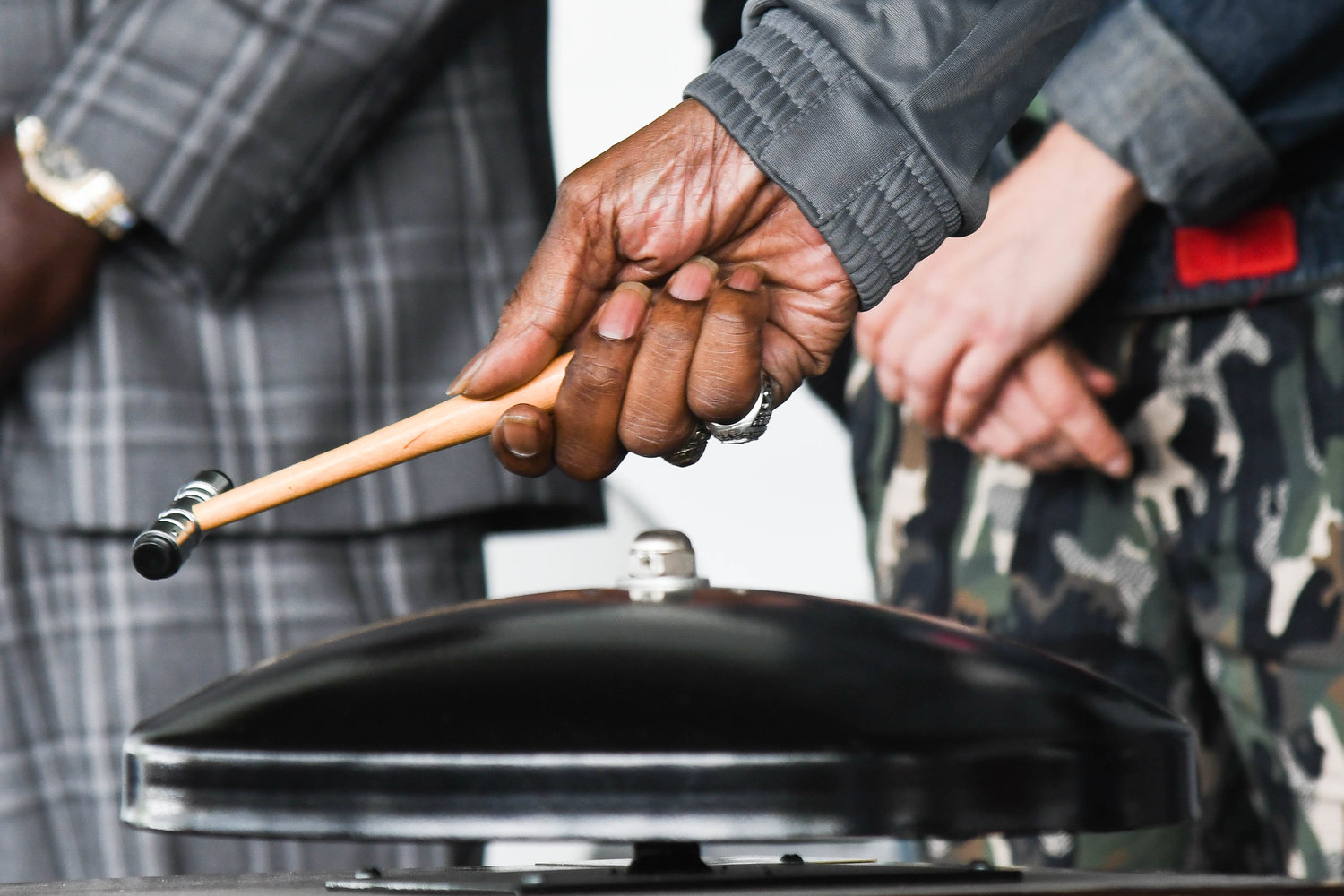 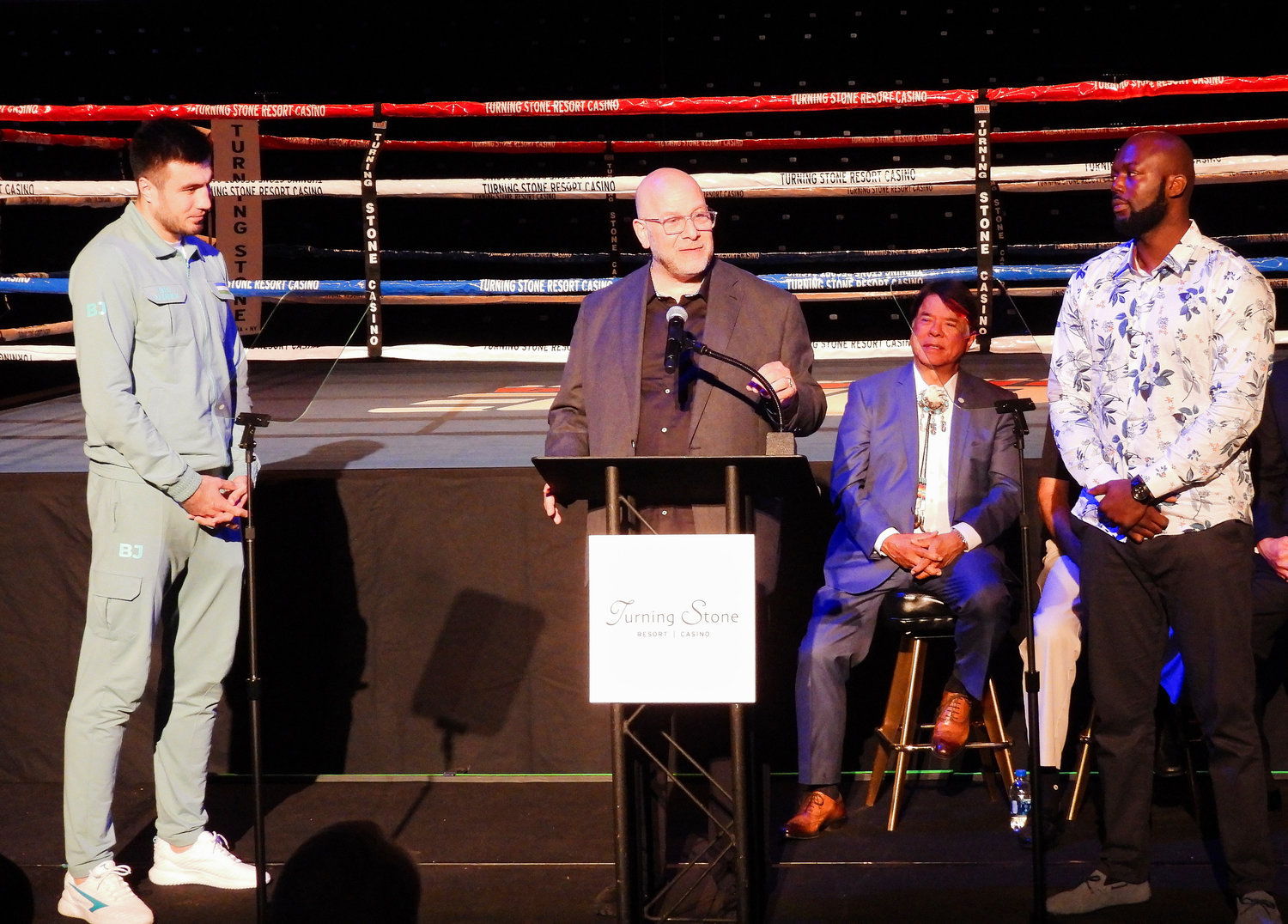 Boxing promoter Lou DiBella, center, talks about the upcoming fight between Bakhodir Jalolov a.k.a “The Big Uzbek,” left, and Jack Mulowayi at a press conference on Thursday kicking off the Hall of Fame Weekend Induction.
(Sentinel Photo by Charles Pritchard) 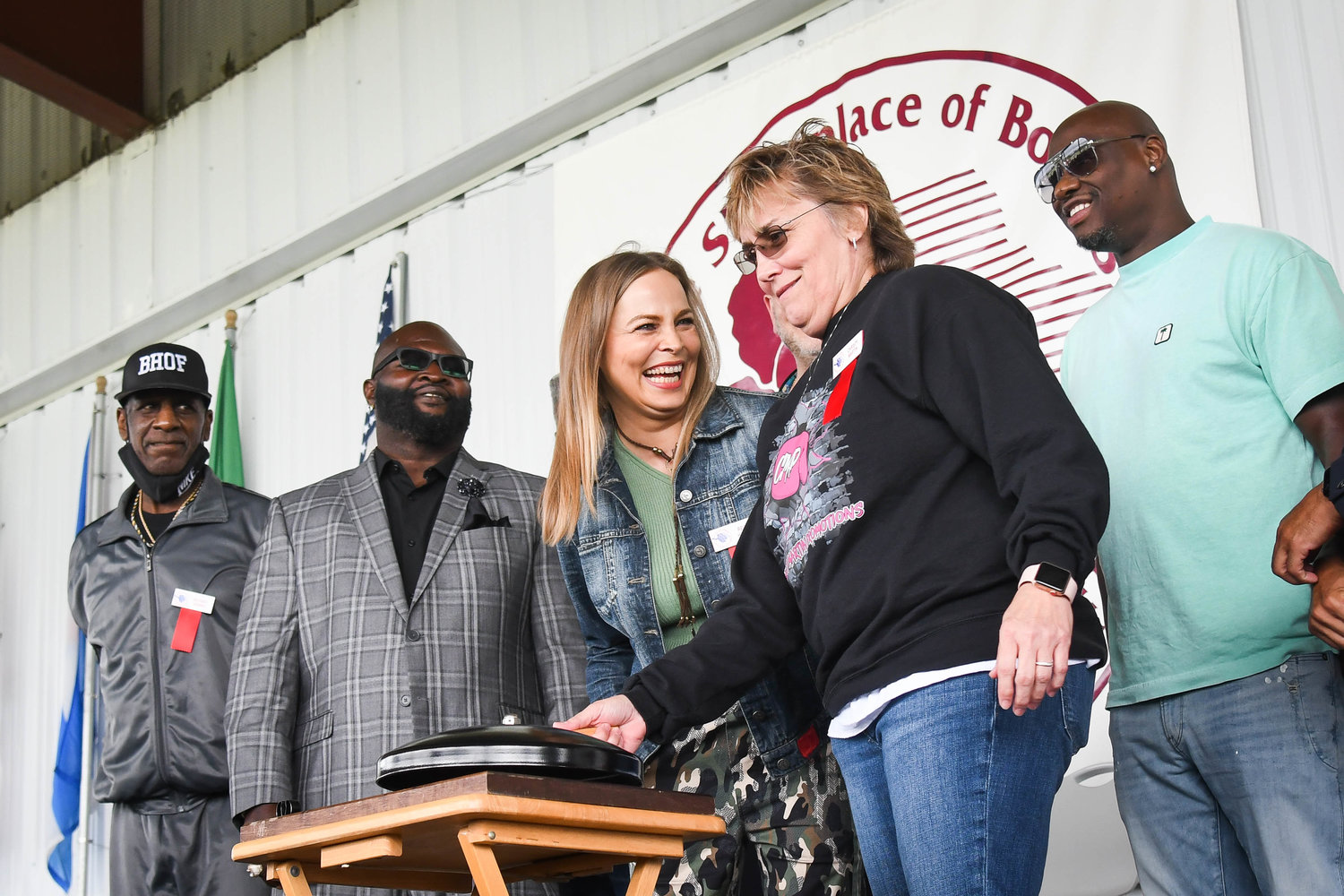 From left, International Boxing Hall of Fame inductees Michael Spinks, James Toney, Antonio Tarver look on as Regina Halmich interacts with Christy Martin while she rings the opening day bell to start the hall's Weekend Induction Trilogy on Thursday in Canastota. There are events throughout the weekend as the Hall of Fame inducts a slew of boxing legends.
(Sentinel photo by Alex Cooper) 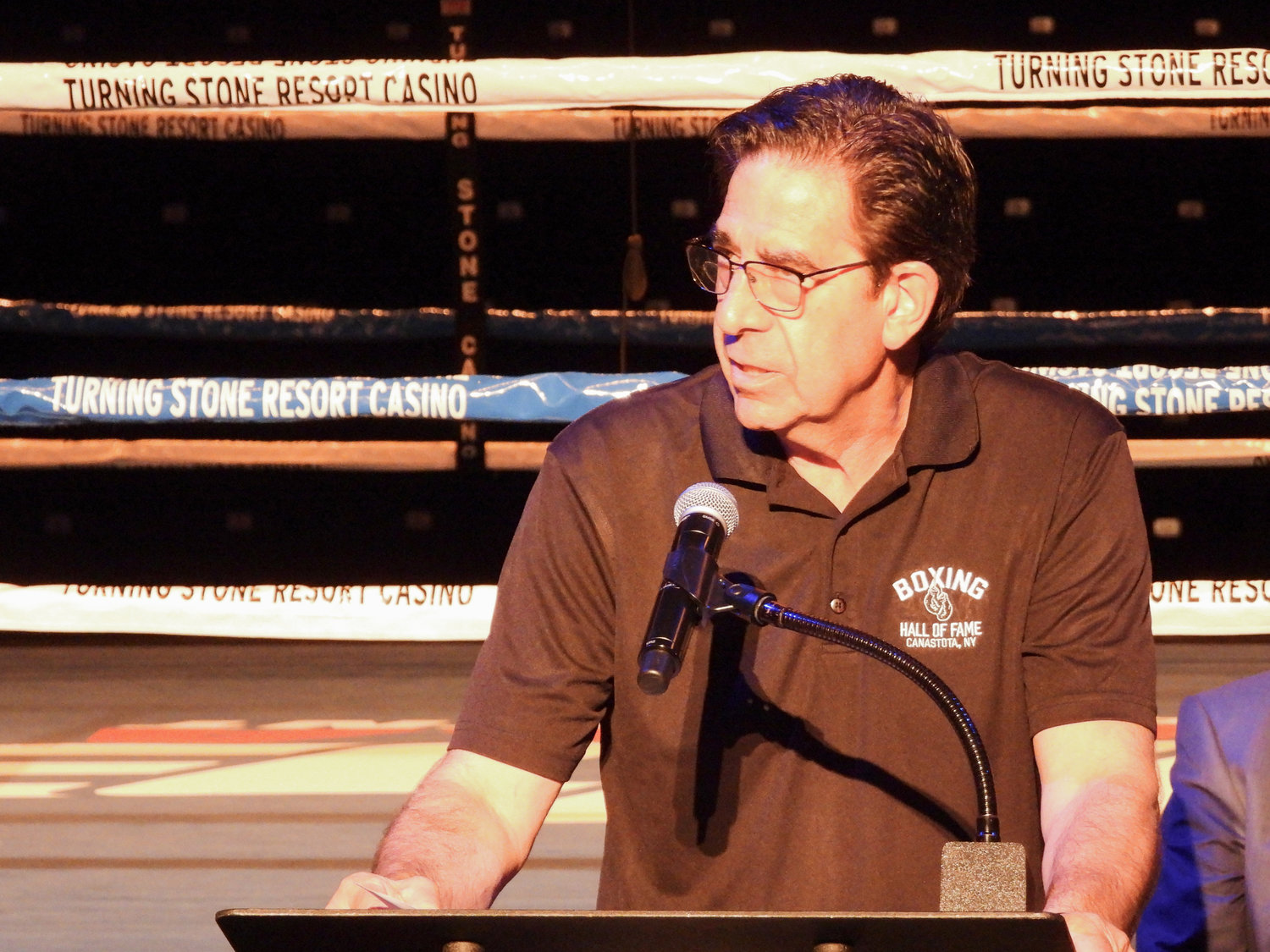 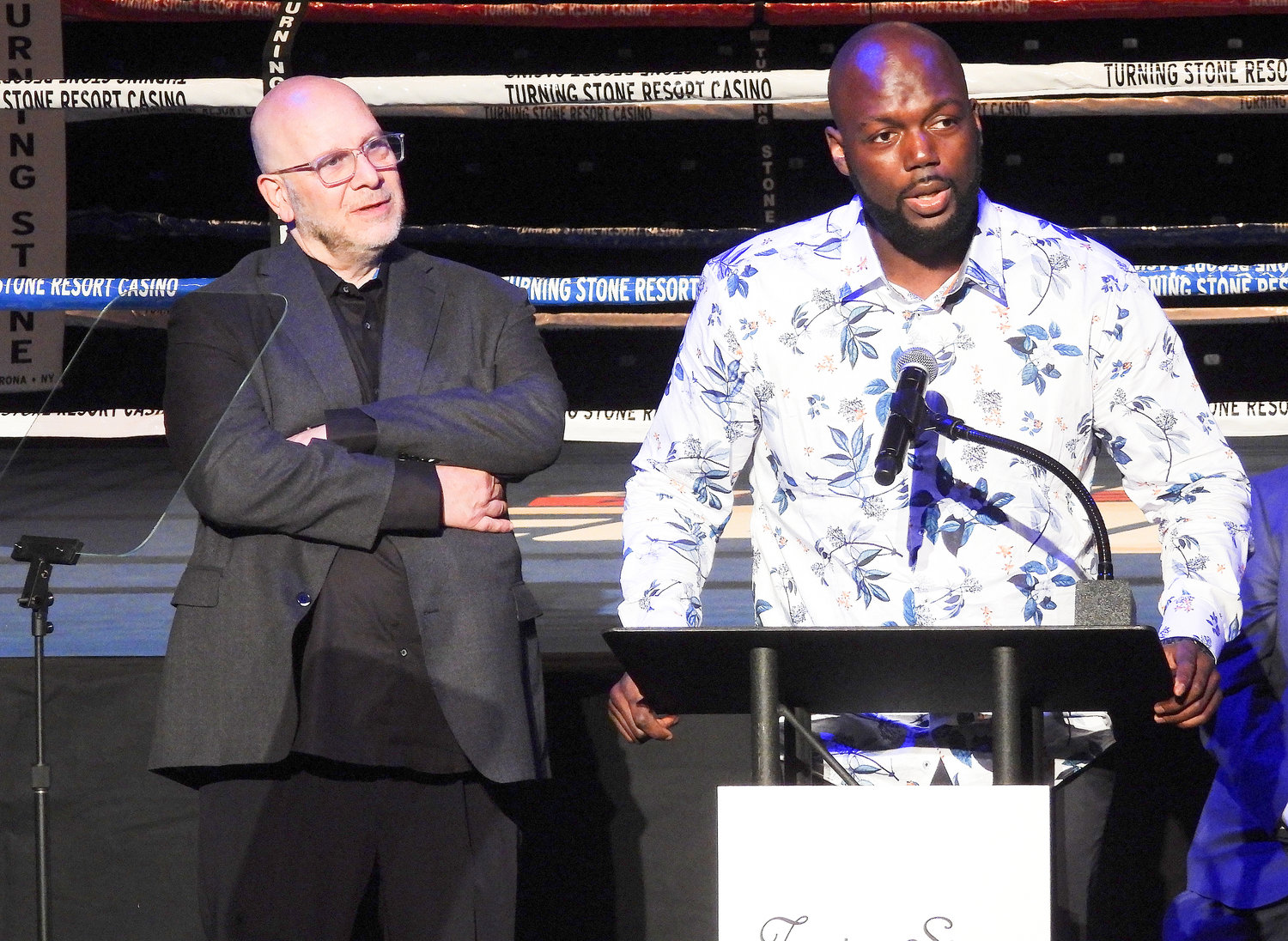 After being introduced by boxing promoter Lou DiBella, boxer Jack Mulowayi speaks at a press conference on Thursday at the Turning Stone, kicking off the Boxing Hall of Fame Induction Weekend
(Sentinel Photo by Charles Pritchard)

Boxer Bakhodir Jalolov speaks at a press conference on Thursday at the Turning Stone, kicking off the Boxing Hall of Fame Induction Weekend
(Sentinel Photo by Charles Pritchard) 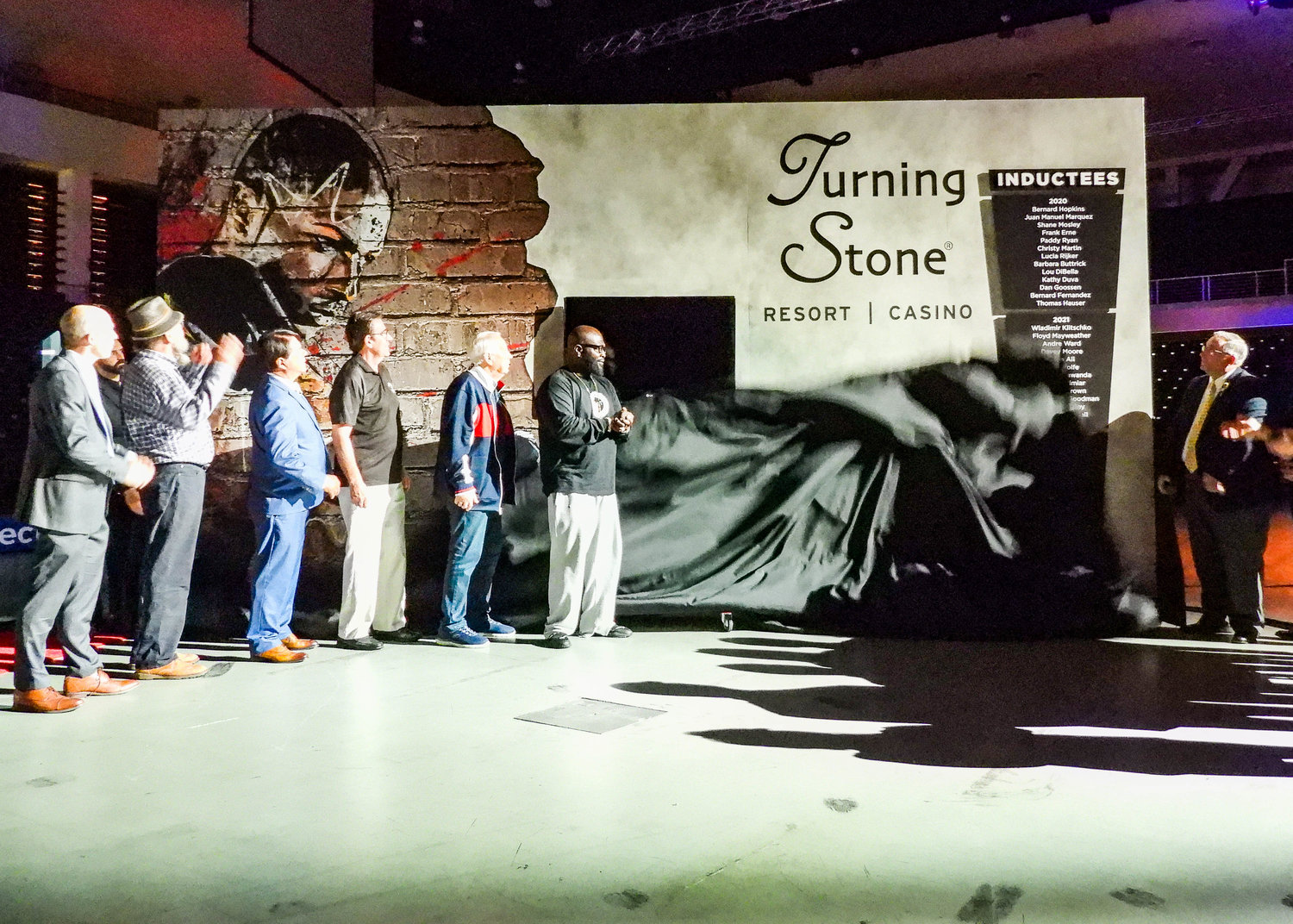 Local officials and boxing celebrities have the Turning Stone Resort and Casino's Boxing Wall revealed at a press conference on Thursday, listing the names of everyone being inducted into the International Boxing Hall of Fame this weekend from 2020, 2021, and 2022.
(Sentinel Photo by Charles Pritchard) 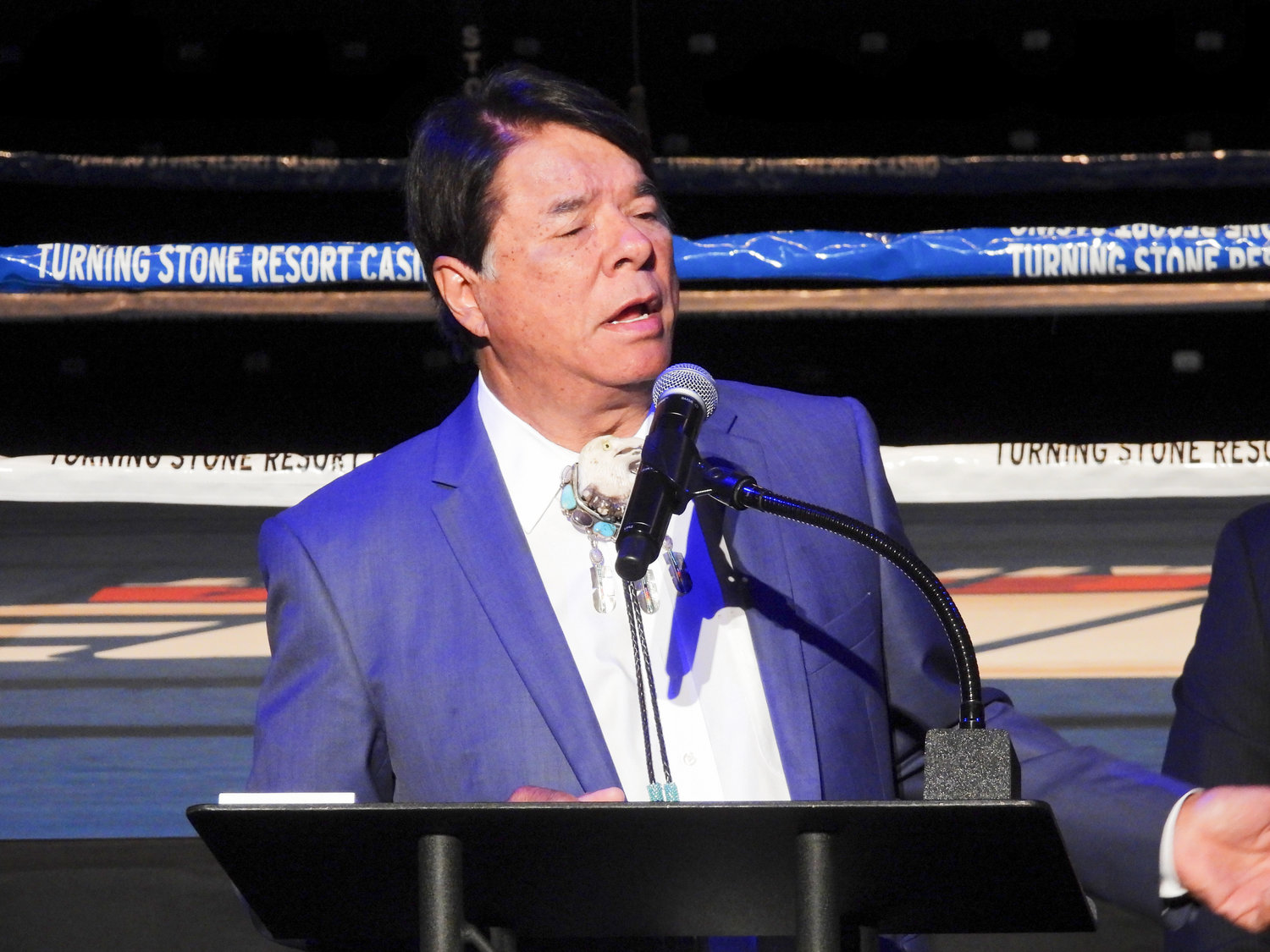 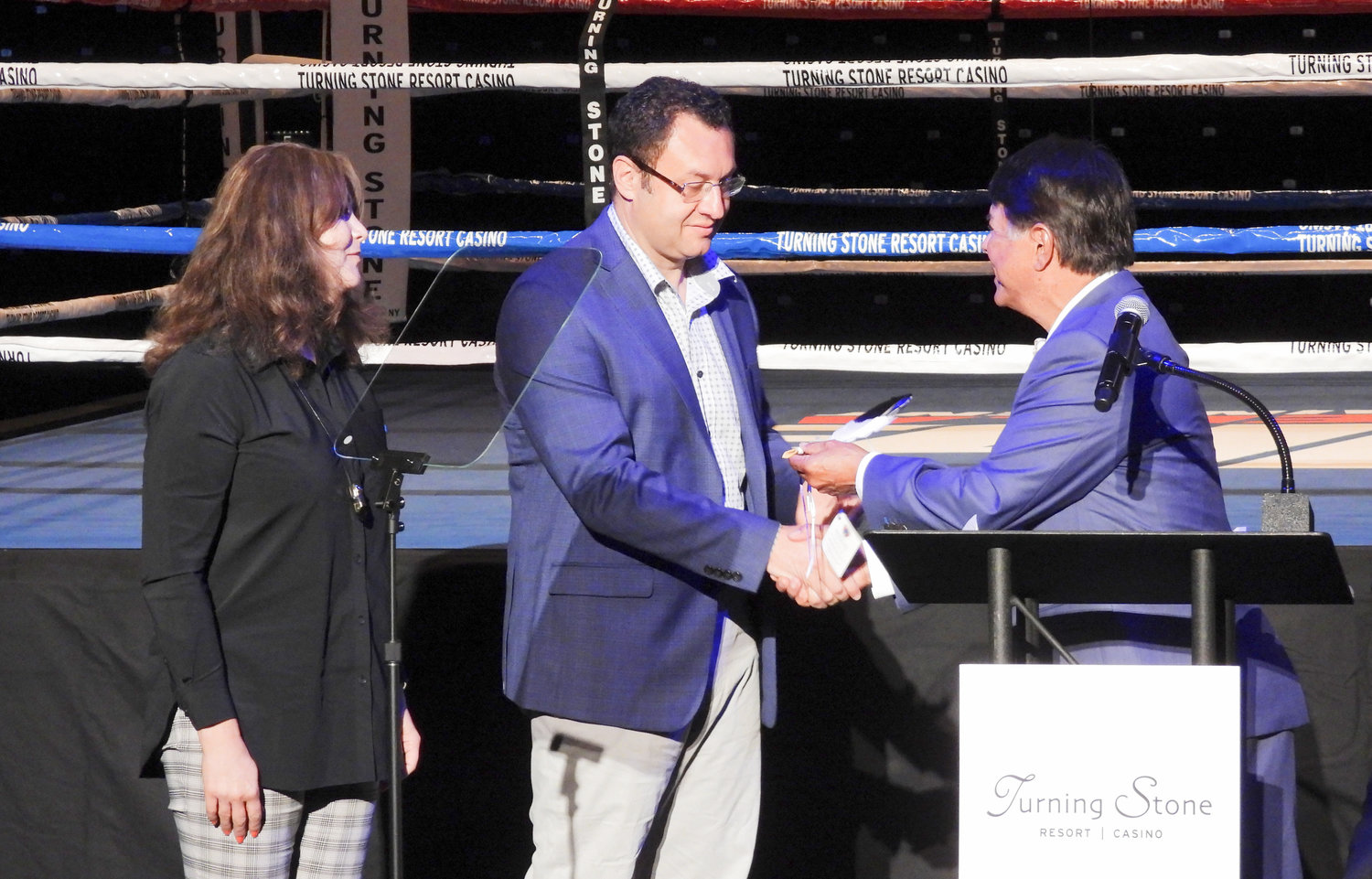 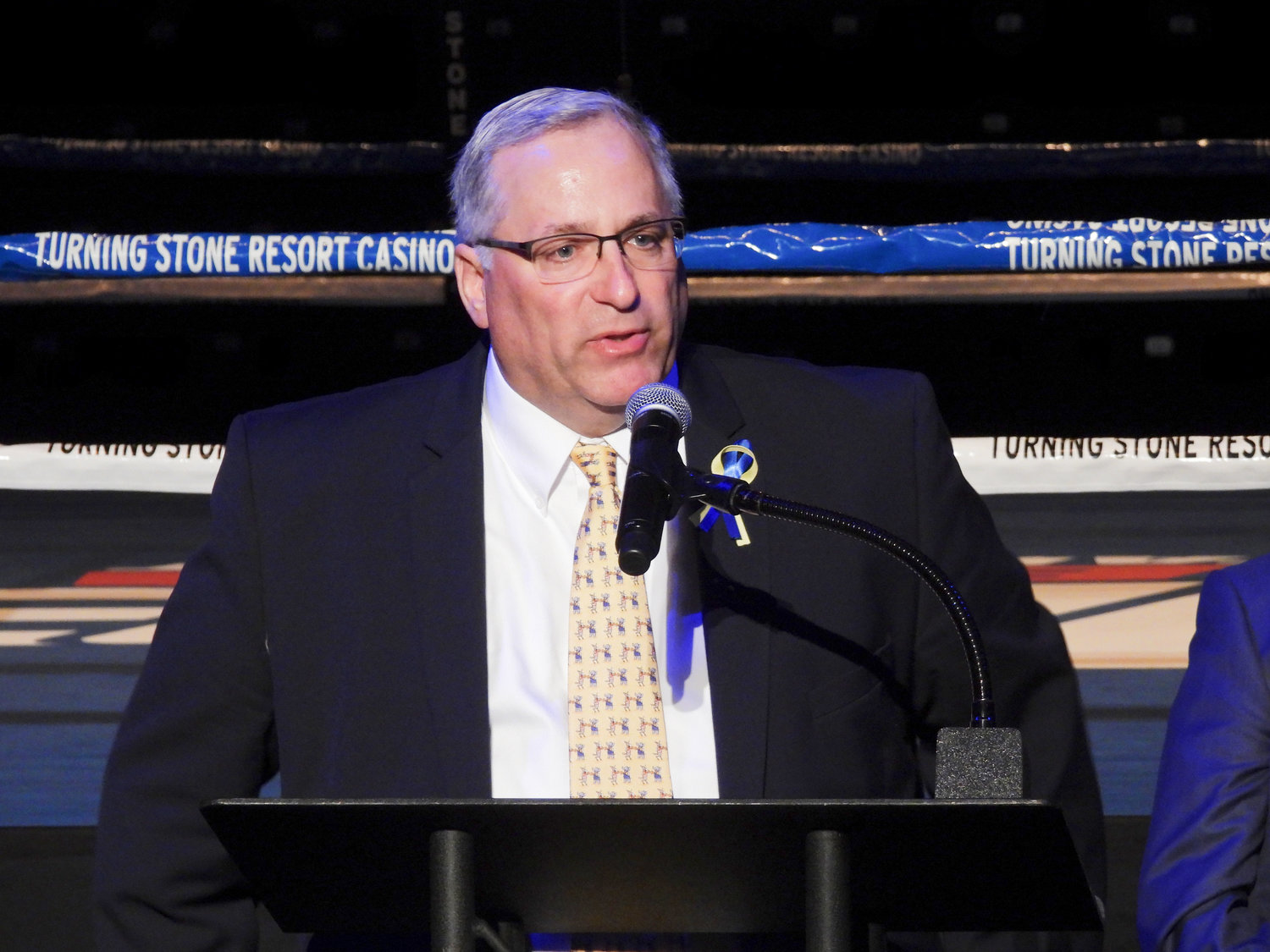 Madison County Chairman John Becker speaks at a press conference on Thursday at the Turning Stone, kicking off the Boxing Hall of Fame Weekend
(Sentinel Photo by Charles Pritchard) 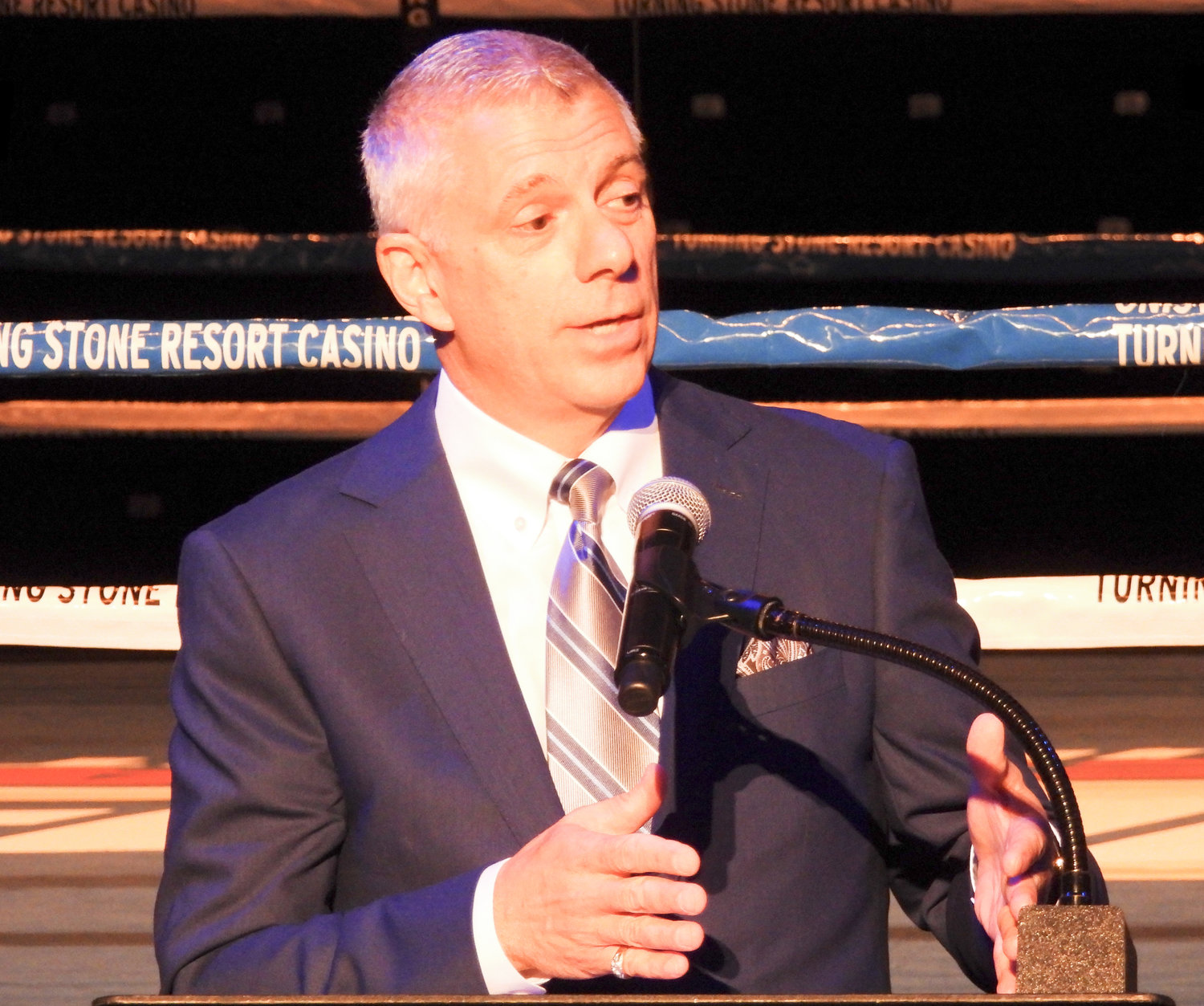 VERONA — Boxing’s biggest celebration and tribute to its greatest names kicked off Thursday at the Turning Stone Resort Casino.

The International Boxing Hall of Fame Induction Weekend for the classes for 2020, 2021 and 2022 is slated to be what officials called a lifetime event. And at Turning Stone, local officials and boxing’s biggest names came together to celebrate and honor achievements, partnerships, and accomplishments.

“This is a historic weekend of festivities, and boxing weekends don’t get bigger than this,” Oneida Nation Representative and Nation Enterprises CEO Ray Halbritter said. “Three classes of inductees spanning three years, totaling 36 boxing legends in all, a championship fight televised all across the world, and the biggest stars in boxing will be here throughout the weekend. And the entire sports world will be watching events unfold over the next few days here in Central New York.”

Bakhodir Jalolov and Jack Mulowayi are scheduled to fight at 7 p.m. Friday, broadcast on Showtime.

Halbritter said Turning Stone has been home to numerous historic fights and fighters, which has also helped the Boxing Hall of Fame nearby.

“All this time since we’ve opened our doors, we’ve been lucky enough to be one exit away from what is arguably one of the greatest boxing destinations of the world,” he said. “The International Boxing Hall of Fame in Canastota: Ed Brophy founded the museum in 1989 intending to celebrate the rich boxing history of the region and establish Central New York as the center of the boxing world.”

Brophy said this weekend has been one that people have been waiting for years to see worldwide, especially after a three-year hiatus due to challenges with the COVID-19 pandemic.

“I’m really excited that this weekend is here to celebrate the greatest sport that’s ever been,” he said. “Boxing speaks the language of life better than any other sport. It has its ups, downs and struggles. And that’s what life’s all about. There is no other sport that has the meaning of life like boxing does, and you feel that in the hearts of the champions that come here every year to Canastota.”

“This is much more than an event,” he continued. “It’s culture, heritage, history and reaching across lines to create an event that millions can enjoy for many years to come.”

“This weekend, millions will tune in and watch and see Turning Stone; they see Canastota, New York, and Verona, New York,” he said. “And I couldn’t be more proud to be a small part of this. Millions will watch, and thousands will visit and come back and make Central New York a regular visit, and maybe even their home.”

Lou DiBella, boxing promoter and recent Boxing Hall of Fame inductee, is looking forward to the fight between Jalolov and Mulowayi.

DiBella said Jalolov, also known as “The Big Uzbek,” is one of the great amateurs in boxing. He won the gold medal for the super heavyweight division in the 2020 Olympics.

“(Mulowayi) was a very a good amateur boxer himself and a very good professional boxer. He’ll be the toughest fight Jalolov has had as a professional,” DiBella said.

Mulowayi said he’s made some changes in his career since his last fight in America.

“It feels good to be back in the states,” Mulowayi said. “I’ve changed my team, and I have a great coach. ... I’ve got everything I need. I’m used to the upsets, and I’m used to stealing the show, so that’s what I’m going to do.”

Jalolov expressed his gratitude for the huge opportunity to headline a big event with Mulowayi.

Boxing legend and 2021 Hall of Fame Inductee Vladimir Klitschko could not attend.

“Instead, he will continue fighting for his homeland of Ukraine, as he has done since the conflict with Russia began,” Halbritter said.

In his place, the Oneida Indian Nation invited Dr. Gennady Bratslavsky and Katya Bratslavsky to represent Klitschko and his fans.

“Gennady immigrated from Ukraine 30 years ago and is one of the most respected urologists in the region,” Halbritter said. “And at the same time, he’s worked tirelessly to raise awareness and funds to provide medical support throughout the conflict. Together, he and K have raised $500,000 to send supplies and purchase ambulances, providing essential medical services to Ukrainians in need.”

In a show of support, the Oneida Indian Nation will be displaying a Ukrainian flag in the event center “...as a symbol of solidarity.”

Halbritter also presented Gennady and Katya with a friendship feather.

“It’s a token of our respect, admiration, and friendship,” he said. “It’s a high expression of our good wishes and warm friendship in solidarity with the people of Ukraine, with deep admiration for your strength, perseverance, and incredible sacrifice.

The conflict in Ukraine also affected the lineup of the show.

“Iegor Plevako, a heavyweight who was to fight, got word while he was training that a close relative of his was killed in the war in Ukraine,” DiBella said. “My thoughts and prayers are with him and his family.”