Cry wolf? Debate over presence of wolves in Northeast

Are wolves hunting and howling in the Northeast woods again, more than a century after they were rooted out of the region?

Cry wolf? Debate over presence of wolves in Northeast 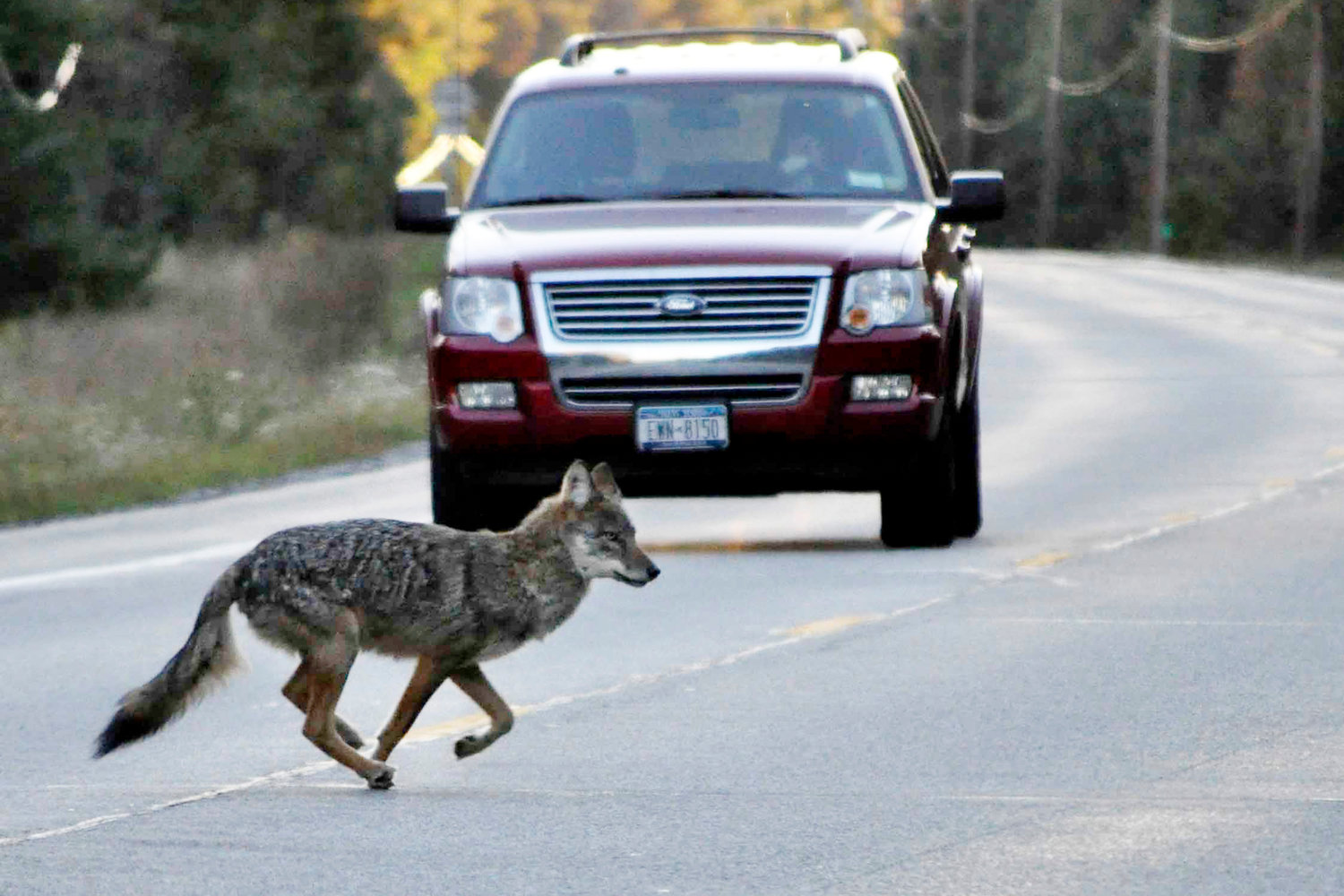 A coyote runs across state Route 3 outside of Tupper Lake, N.Y., in the Adirondacks, Sept. 20, 2010. Advocates think wolves are hunting and howling in the Northeast woods, more than a century after they were shot, trapped and poisoned into eradication across the region. Complicating the question is the fact that wolves can not only appear similar to eastern coyotes, but that they typically share genetic material.
(Mike Lynch/Adirondack Daily Enterprise via AP, File)
Posted Friday, August 26, 2022 2:22 pm
Michael Hill, Associated Press

ALBANY — Are wolves hunting and howling in the Northeast woods again, more than a century after they were rooted out of the region?

Advocates who think so say a recent DNA analysis shows a strapping canine shot by a coyote hunter in upstate New York last winter was actually a wolf. They believe there are other wolves in New York and New England, saying they could be crossing the frozen St. Lawrence River while heading south from Canada. And they want the government to protect them.

"There has to be other wolves here," said John Glowa, president of the Maine Wolf Coalition. "We have no doubt that eastern wolves are coming down and crossing the St. Lawrence. And they're being killed. And they're being called coyotes."

Not everyone is convinced.

The test results are the latest entry in a long-running disagreement in the Northeast about the presence of a charismatic wild animal dogged by a reputation as a big, bad villain in children's stories and as a livestock poacher to farmers. It's a surprisingly complicated question, in part because eastern coyotes typically share some genetic material with wolves.

"The question is: What is a wolf? And that is not as simple as it sounds," said Daniel Rosenblatt, New York Department of Environmental Conservation wildlife biologist.

Critics claim wildlife officials are slow to acknowledge wolves in their midst because they would have to accommodate the presence of a federally protected species.

State wildlife officials say there's no evidence wild wolves have reestablished themselves in region, though some concede the possibility of scattered lone wolves. They're not showing up on trail cameras, they say. Maine Wildlife Division Director Nate Webb said if wolves were back in any numbers in his state, they'd be preying on moose.

"I worked on wolves for over a decade and have been to hundreds of wolves kills personally. And it's pretty, pretty easy to tell when a moose has been killed by wolves," Webb said. "And that's just not occurring here in Maine."

Wolves were effectively shot, trapped and poisoned out of the Northeast by the start of the 20th century, leaving a gap for coyotes to fill. Smaller than wolves with pointier muzzles and ears, eastern coyotes are now common in the region.

But it's not unusual for people in the Northeast report canines seemingly too big and bulky to be coyotes, which typically weigh around 40 pounds.

"And once in a blue moon, you'll hear a howl that you know is not a coyote," said Butera, president of the Northeast Ecological Recovery Society.

But a 2011 academic study using carbon isotopes to distinguish wild from captive wolves suggested that at least three wild wolves were living in Vermont and New York in the previous decade.

Glowa, citing DNA analyses and other evidence, said at least a half dozen wolves were killed in New York, Massachusetts, Vermont and Maine from 1993 to 2007. He believes these cases likely represent a fraction of the wolves in the Northeast.

Advocates note that wolves can travel hundreds of miles, and that wolf populations have already rebounded around the Great Lakes and farther west.

Some canine researchers say it's not clear if there are sustained populations in the Northeast, but it appears likely wolves are wandering into the region.

"In all honesty, I don't know how there can't be, just based on the biology that canines disperse incredible distances. By pure fact alone, why would there not be? Unless they're always hunted," said Bridgett vonHoldt, professor of ecology and evolutionary biology Princeton University.

In the case of the recent New York animal, Glowa said he was tipped off about pictures posted online by a hunter with his kill this winter west of Albany, about 150 miles  south of the Canadian border. The hunter agreed to provide a tissue sample of the 85-pound animal to advocates. A lab analysis showed predominantly wolf ancestry, with a very small amount of coyote genetic material.

However, New York environmental officials say a separate DNA analysis they commissioned determined the animal was most closely identified as an eastern coyote. The conclusion was based in part on maternal DNA markers, though the analysis found ample evidence of wolf genetic material.

VonHoldt, leader of the North American Canine Ancestry Project, said both tests relied on a limited amount of genetic data. In her opinion, it was not possible to conclude the animal was a coyote or a wolf without more data.

The Princeton lab is performing additional tests on samples from the animal.

The issue any genetic analyst must face is the blurry line between wolves and eastern coyotes. Researchers believe coyotes heading east over the Great Lakes bred with wolves. The result is that eastern coyotes are a bit brawnier than those out west. Some people even use the term "coywolves."

Rosenblatt said New York not only is retesting this animal, but also is trying to collect more genetic data on coyotes so they have a better sense of makeup of the canines at large in the woods.

"We know this question is not going to go away," he said.