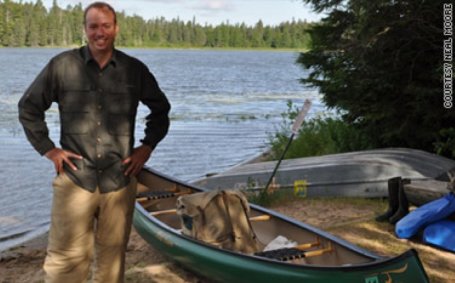 A native of Los Angeles, adventurer and storyteller Neal Moore was in Rome over the weekend while traveling by canoe through the 22nd state of his 22-state waterway journey that has brought him from coast-to-coast.

Dubbed “a modern-day Huck Finn” by CNN, Moore’s work from North America, Africa and the Far East has appeared in The New Yorker, Der Spiegel and on CNN International.

As for Moore’s 22-state journey, “The big idea is to explore how the waterways connect, and how we connect as Americans — to expedition across the country in the first mode of transport and along the first thoroughfares,” he explained.

Moore said he expects to complete his mission on Tuesday, Dec. 14 when he reaches New York City.

“The end game — the final hurrah — is to paddle around the Statue of Liberty and land in Midtown Manhattan,” he quipped.

While stopping in Rome, the adventurer, who is also an Eagle Scout, spoke to a Boy Scout troop from Verona at the boathouse located at Harborway Sunday. That boathouse is where Moore’s canoe and gear had been located, near where the Mohawk River pours into the Erie Canal.

Since February 2020, Moore has been going the distance with his continuous storytelling expedition that took off from Astoria, Ore. on the Pacific Coast. Once he reaches the Statue of Liberty on Dec. 14, Moore will have traveled 7,500 miles by canoe for 22 months, in 22 states.

Moore said his plan was to head for the continental divide during a time when the nation is truly divided. He traveled up the Columbia, the Snake, and the Clark Fork rivers to MacDonald Pass in Montana – all upstream and uphill for a total 1,078 miles.

He said it was a struggle, but Moore completed this first phase of the expedition in 97 days.

During the second phase of his journey, Moore canoed 3,599 river miles in an eight-month paddle down the Missouri, up and down the Mississippi, with a side jaunt up and down the Ohio River to Paducah, Kty., dodging acres of barges, 1,000 foot tankers, swirling eddies, and the Chain of Rocks to the French Quarter, New Orleans.

Moore described his third leg of the journey as a “tortuous route of 2,890 river and portage miles to Lady Liberty at the edge of the Atlantic.”

He said, “We’ve got to skirt the Gulf Coast in open, often treacherous water, paddle up the Mobile, Tombigbee, and Tenn-Tom waterways, down the Tennessee, up the Ohio, up and down the Kentucky and the Kanawha, then up the Allegheny and the Chadakoin.”

From Lake Chautauqua, Moore said it was uphill and downhill over Old Portage Road to Lake Erie. Then he took to the Erie Canal and the Seneca.

Moore will have navigated a 170-mile portage from Syracuse to Albany alongside the Oneida and the Mohawk, due to the state Canal System shutting down operations Oct. 13. And at last, he will travel the Hudson.

While paddling, Moore has been reporting and documenting his journey.

In addition to his journalistic work, Moore has published two books, “Homelands: A Memoir,” and “Down the Mississippi.” Fans can track Moore’s 7,500 mile journey at his blog: www.22rivers.com.