With bipartisan congressional support and just under $1 billion in federal funds, the 988 mental health helpline has quickly expanded its reach in the six months since it launched. 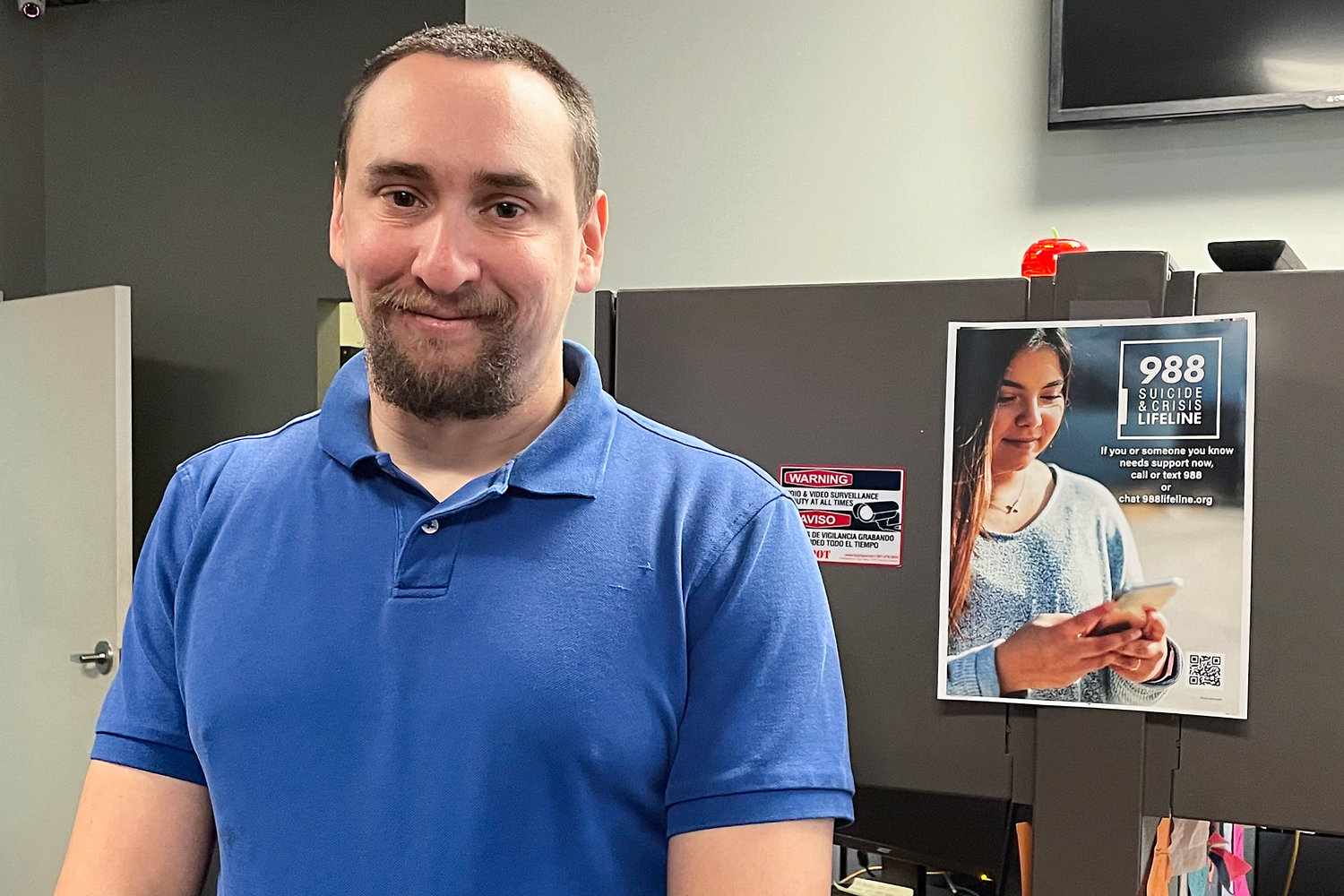 988 Call Center Director Jamieson Brill poses for a photo in front of a desk where work workers take calls around the clock at a facility in Hyattsville, Md., Oct. 7, 2022. Brill works in one of more than 200 call centers fanned out around the country tasked with answering an uptick in calls around the clock from people considering suicide or experiencing a mental health emergency.
(AP Photo/Amanda Seitz) 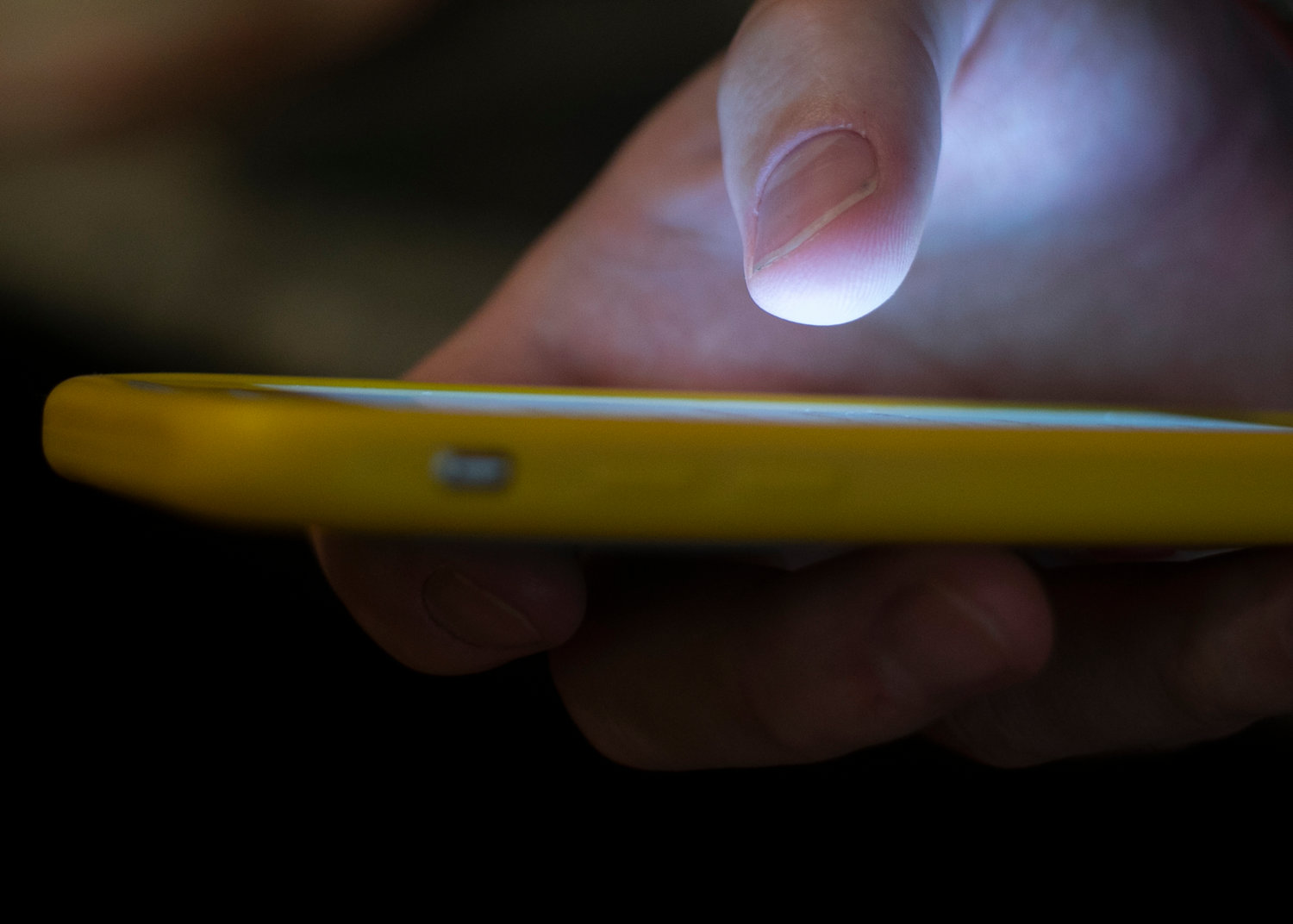 A man uses a cell phone in New Orleans, Aug. 11, 2019. The 988 mental health and suicide helpline has quickly expanded its reach in the six months since it launched. It has received just over 2 million calls, texts and chat message since July.
(AP Photo/Jenny Kane, File) 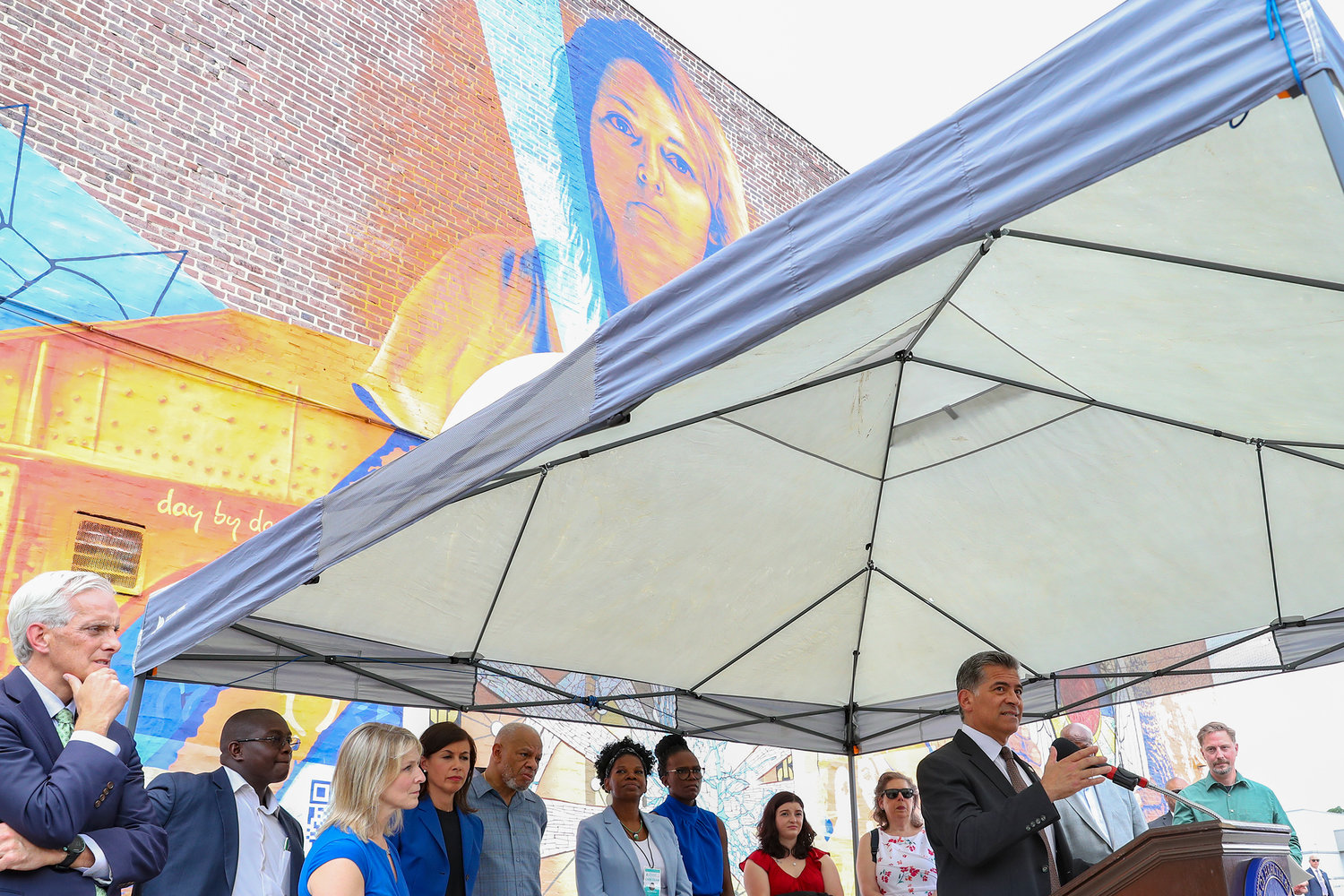 Xavier Becerra, Secretary of the Department of Health and Human Services, speaks during a press conference on the kickoff of 988, a new national mental health hotline, Friday, July 15, 2022, in Philadelphia. The press conference took place in front of the Contemplation, Clarity and Resilience mural by artist Eric Okdeh, which is a mural that represents, among many other things, the process of overcoming hardships.
(Heather Khalifa/The Philadelphia Inquirer via AP, File) 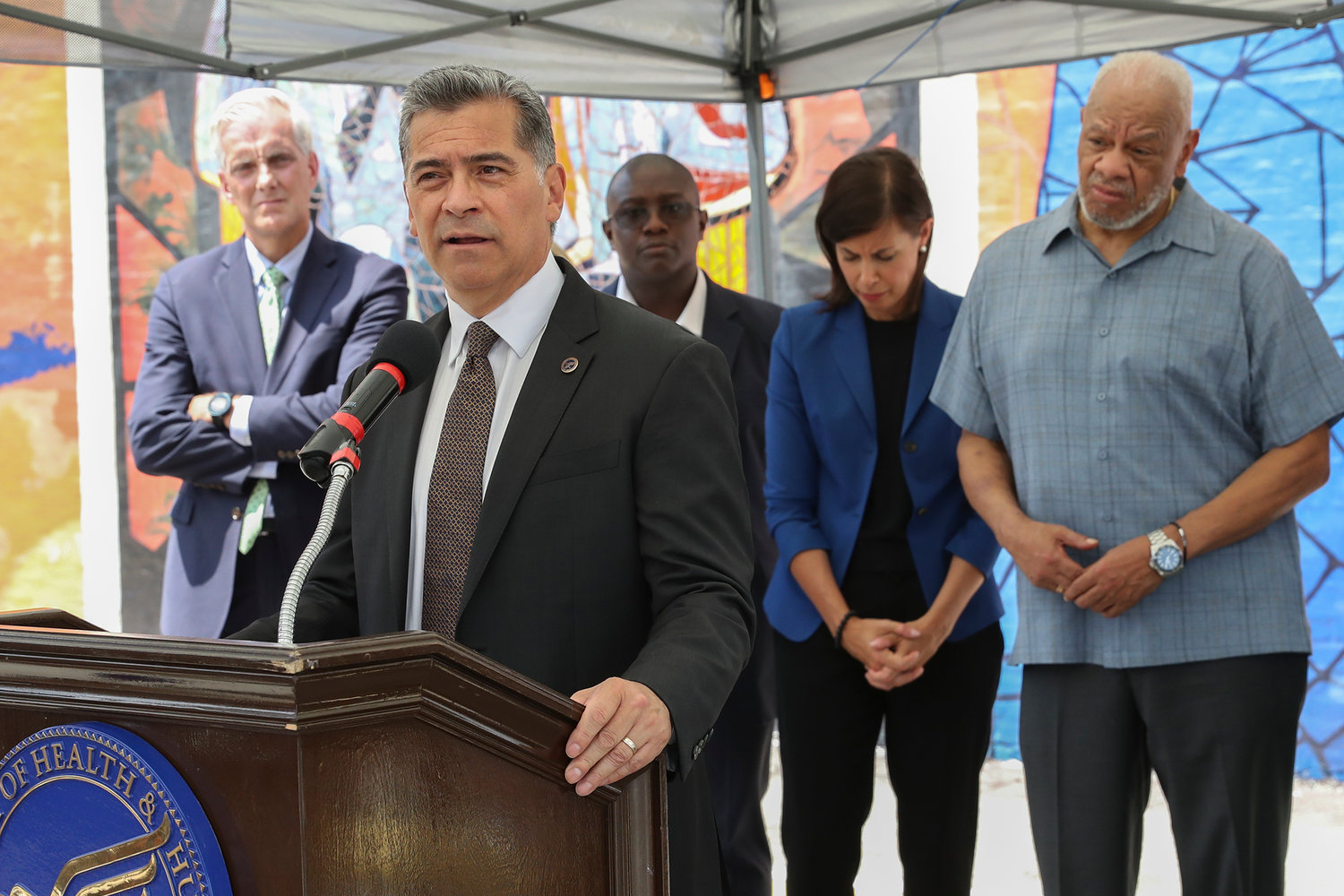 Xavier Becerra, Secretary of the Department of Health and Human Services, speaks at the podium during a press conference on the kickoff of 988, a new national mental health hotline, in West Philadelphia, July 15, 2022. The press conference took place in front of the Contemplation, Clarity and Resilience mural by artist Eric Okdeh, which is a mural that represents, among many other things, the process of overcoming hardships.
(Heather Khalifa/The Philadelphia Inquirer via AP, File)
Previous Next
Posted Friday, January 13, 2023 10:30 am
Charles Pritchard
Staff writer
email / twitter

With bipartisan congressional support and just under $1 billion in federal funds, the 988 mental health helpline has quickly expanded its reach in the six months since it launched — with over 2 million calls, texts and chat messages pouring in.

When the around-the-clock service launched last summer, it built on the existing network that staffed the old national lifeline (1-800-273-8255) — the new 988 number is designed to be as easy to remember as 911.

It couldn’t have come at a more needed time, officials say, as depression rates in U.S. adults, overdose deaths and suicide rates have been on the rise.

Cheryl Giarrusso, the division director for crisis services at Contact Community Services, said CCS handles the 988 calls for 23 counties across New York State, including Madison, Lewis, Oneida and Herkimer counties. Giarrusso said it has been busy since the rollout in July, with a large spike that has now leveled out. But it doesn’t mean it’s easy.

“Across the board, all centers, have had staffing challenges,” she said. “I’d say we’re coming out on the other side of that now, but it still has been a challenge.”

Giarrusso said the upstate call center will soon be joined by a pair of new call centers, which are getting ready to open in the Albany and Adirondack areas. “And once these area have a primary call center open, we provide backup coverage,” she added.

Giarrusso encourages anyone to reach out and dial 988 who needs help, whether it’s for themselves or a friend, family, or loved one.

“The line is available for anyone that needs a safe place to talk,” she said. “It’s a non-judgmental line that’s more than happy to talk to anyone for anything. One person’s crisis might not be another’s, but we like to meet people where they are and provide them with a place to share whatever it is that’s happen. And often times, when you’re able to share, it seems to put things in a better perspective. And I think it’s because people need that personal connection.”

“Nothing is too big, or too small,” she added.

Giarrusso said this free 24-hour service is needed now, more than ever to help people find the help they need. And while they listen, Giarrusso said they’re connected to the 211 system — which can help individuals access specific help for a variety of issues.

When asked what qualifications were needed to help with 988, Giarrusso said it starts with being a good listener. “We’d love to have people get in touch with us at our website [at contactsyracuse.org] and give us a call,” she said. “We’re looking for people who are good listeners and we can go from there. Anyone interested who thinks they have an affinity for should reach out.”

Nationally, the data shows the call centers are bustling.

“The call volume is, in some instances, well beyond what we anticipated,” said Miriam Delphin-Rittmon, assistant secretary for mental health and substance use in the Department of Health and Human Services. “It does let us know that people are struggling, people are having a hard time. Where I feel heartened is that people are getting connected to services and supports, as opposed to struggling on their own.”

The 988 helpline registered 154,585 more calls, texts and chat messages during November 2022 compared to the old national lifeline in November 2021, according to the latest data available.

Texting has been particularly popular, with the Substance Abuse and Mental Health Services Administration noting a 1,227% increase in texts to the line during that same time.

The Veterans Crisis Line — callers can press “1” after texting or calling 988 to reach it — has fielded 450,000 calls, texts and chat messages, according to the Department of Veterans Affairs. By the end of the year, the line had handled a nearly 10% increase compared to 2021.

Calls show no signs of slowing into this year, with counselors answering 3,869 calls on New Year’s Eve and the first day of 2023 — a 30% increase compared to the previous holiday. The Spanish language line saw an increase of 3,800 calls year over year from November 2021 to November 2022.

States are expected to receive more money to fund the line from the $1.7 trillion end-of-the year spending package, which set aside another half-billion dollars for the project.

Still, long-term funding for the 988 helpline is in jeopardy in some states, which have yet to figure out a permanent funding plan for it. While the federal government has poured millions of dollars into the project, states are expected to take over the operation and funding of the 988 line — just as they do with 911 emergency call services.