During the public comment portion of Wednesday’s Common Council meeting, Anne Sullivan, who resides at the corner of Cottage Street and Floyd Avenue, complained about traffic created ... 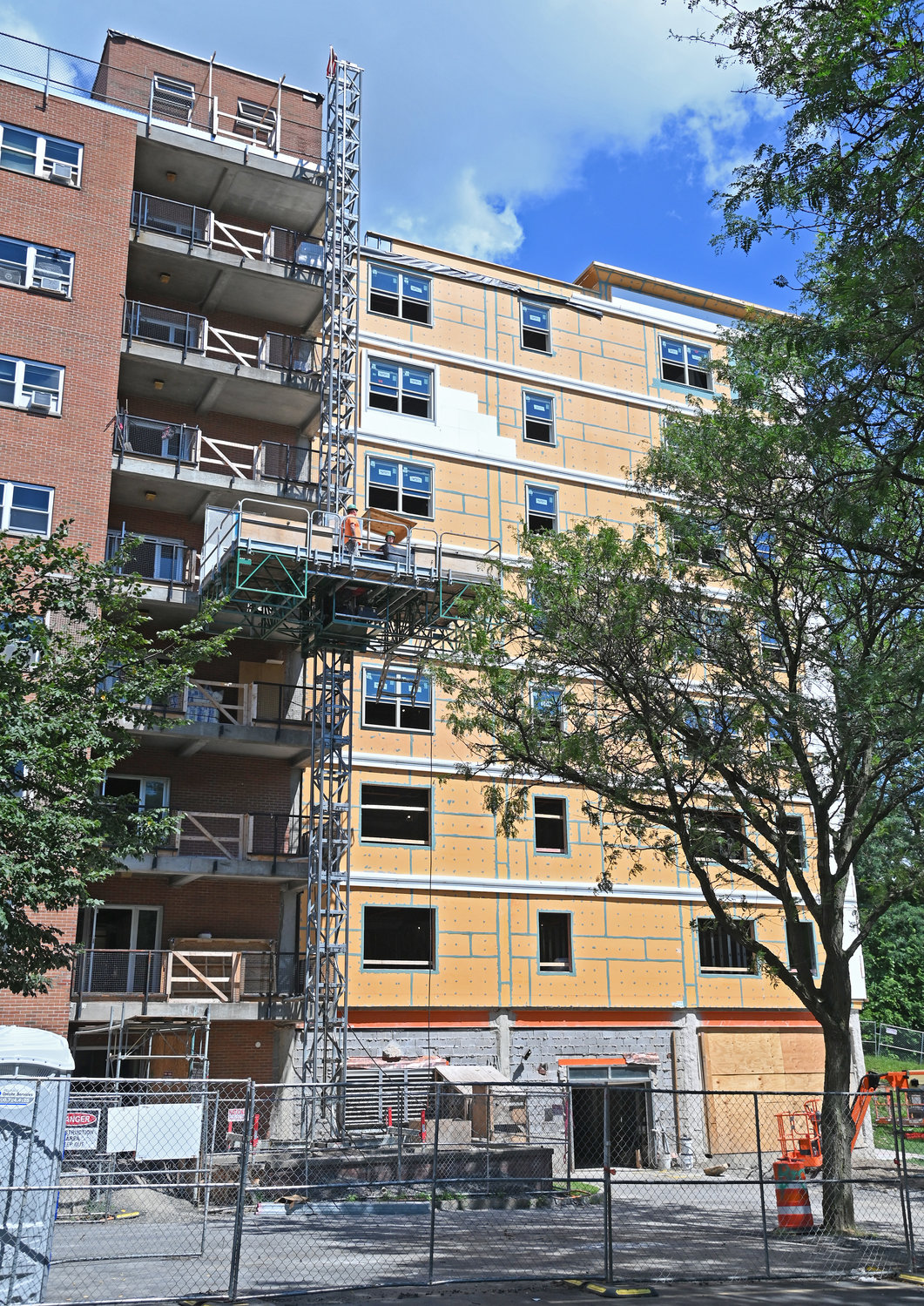 Construction work is well under way on the Colonial II Apartment Complex on Cottage Street in Rome on Thursday. Construction started on half of the building and will be completed before starting on the rest of the building.
(Sentinel photo by John Clifford)
Nicole A. Hawley
Staff writer
email / twitter

ROME — During the public comment portion of Wednesday’s Common Council meeting, Anne Sullivan, who resides at the corner of Cottage Street and Floyd Avenue, complained about traffic created and the parking of construction trucks on Cottage Street during the Colonial II apartments renovation work.

Construction began last month on the $41 million rehabilitation and modernization of Colonial II, with upgrades expected to improve 74 homes for seniors and people with disabilities.

“We’re having huge parking issues,” said Sullivan. “Work trucks arrive at 7 a.m. and they’re parking up and down the street, nearly blocking people’s driveways, and we’ve had some park on both sides of the road. I went to the Colonial II manager and she told me she wasn’t aware they were parking on Cottage Street.”

When trying to pull out of driveways, “you’re halfway through into the street in order to see oncoming traffic,” she said. “There’s signs that say ‘no parking from here to corner,’ but they’re still too close and you can’t see pulling out. Men come back from their lunch, smoking cigarettes in their trucks, and they’re throwing butts all over Cottage Street. One Waste Management truck couldn’t get through and the police needed to be called.”

In addition to safety hazards created by the construction trucks, Sullivan also suggested a traffic study be conducted to create a crosswalk similar to that on East Dominick Street, near the Savoy Restaurant building, across Floyd Avenue in the area of Cottage Street for Colonial I and II residents.

“Something has to be done before someone gets killed there. It will happen, and I will be there to witness it because I live right there. That would be extremely traumatic for the entire neighborhood,” she said.

During councilor reports, Second Ward Councilor John B. Mortise promised Sullivan he would be in contact with the fire and police chiefs, the Department of Public Works commissioner and city Corporation Counsel regarding the “legality” of temporary signage to help curb the construction traffic issues in her neighborhood.

“It’s understandable that contractors want to put whatever they can into a project” to get it done, “but the neighborhood should not have to put up with this type of disruption on a day-to-day basis. Maybe the consensus will be temporary parking,” Mortise said. “They shouldn’t have to be disrupting the entire neighborhood.”

Updates on proposed legislation that would authorize a 90-day moratorium extension with respect to the establishment and construction of solar arrays within the city was discussed during Wednesday’s Common Council meeting held in Council Chambers of City Hall.

Third Ward Councilor Kimberly Rogers, who was attending the meeting online from home due to illness, made councilors aware that changes had been made to the draft solar legislation and asked that they review the draft and come back with any needed revisions.

Fifth Ward Councilor Frank R. Anderson then commended Rogers for her work on drafting the legislation, describing it as a “fluid document” that the city Planning Board will now need to review.

The legislation “is pretty comprehensive and it took into account comments I received from several people in various areas that we’ll need to explore down the road, such as road remediation and infrastructure issues in there,” said Anderson. “I was worried about any damage construction workers may be doing to our roads” when installing solar arrays, “especially if it’s a case where we did the repairs and now we have damage.”

Mortise reiterated Rogers’ efforts, stating she and Anderson have put “countless time and effort” in drafting the solar legislation.

“My biggest issue was the decommissioning” process of solar farms, said Mortise. “I have a solar project going up literally feet from my driveway they just started a few weeks ago. This not only effects the whole city, but one is right next to my house.”

Hopefully “any future projects can look nice instead of just throwing up panels and to let them be what they are,” he said. “It shouldn’t cost anyone in the city — the taxpayers — for solar projects to come into the city. It should be all at the cost of those putting them in.”

“Taking into account COVID issues that plagued this city as well as any other city over the last two years, our audit shows a stronger financial picture than last year, and we were very happy with last year’s audit,” Anderson said. “I applaud the city’s fiscal conservatism. We’re definitely moving in the right direction from a financial standpoint.”

No new legislation was included on the agenda.