Cortland sent firefighting gear to Ukraine. The Ukrainians it helped sent back a Russian fighter jet, in the form of a challenge coin. 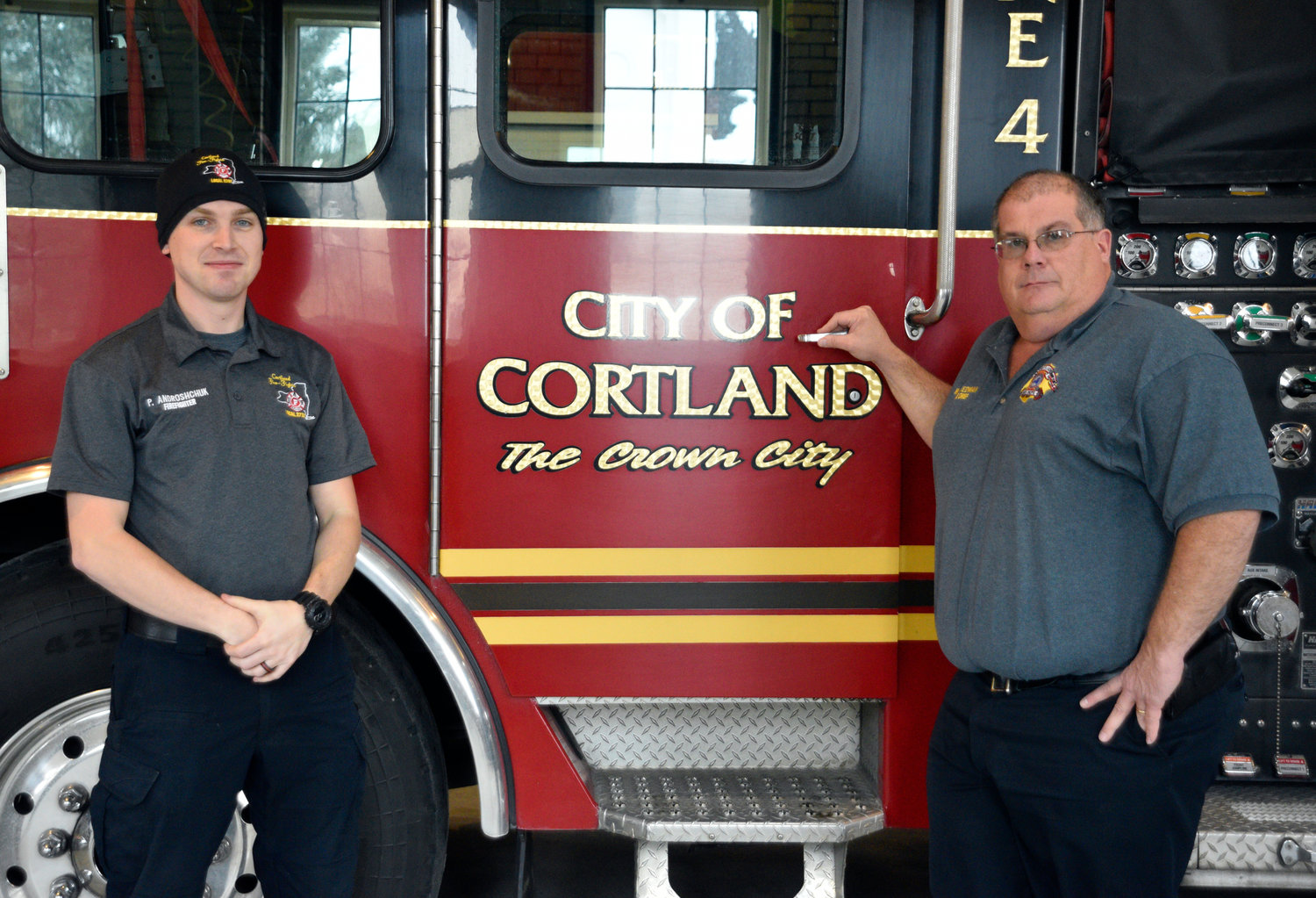 Cortland Firefighter Pavel Androshchuk, left, with the help of Fire Chief Wayne Friedman, right, along with Battalion Chief Derek Reynolds, the Cortland Ukrainian Pentecostal Church and many others — with approval from Cortland’s Common Council — has shipped more than 200 sets of protective gear to Ukraine, which has been seen on the frontlines, and in some of the areas of heaviest conflict in the country.
(AP Photos/Jacob Mack/Cortland Standard) 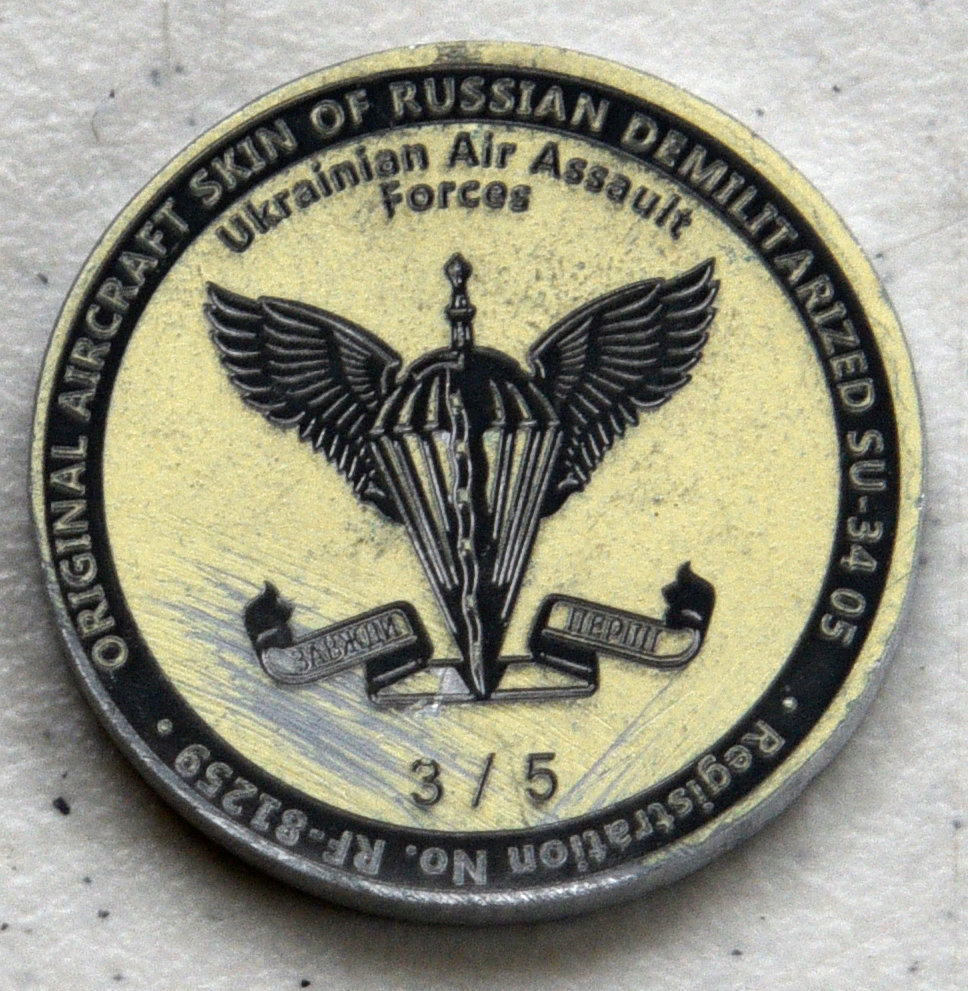 The face of a challenge coin like that of the coin Pavel Androshchuk presented to the Cortland Common Council. 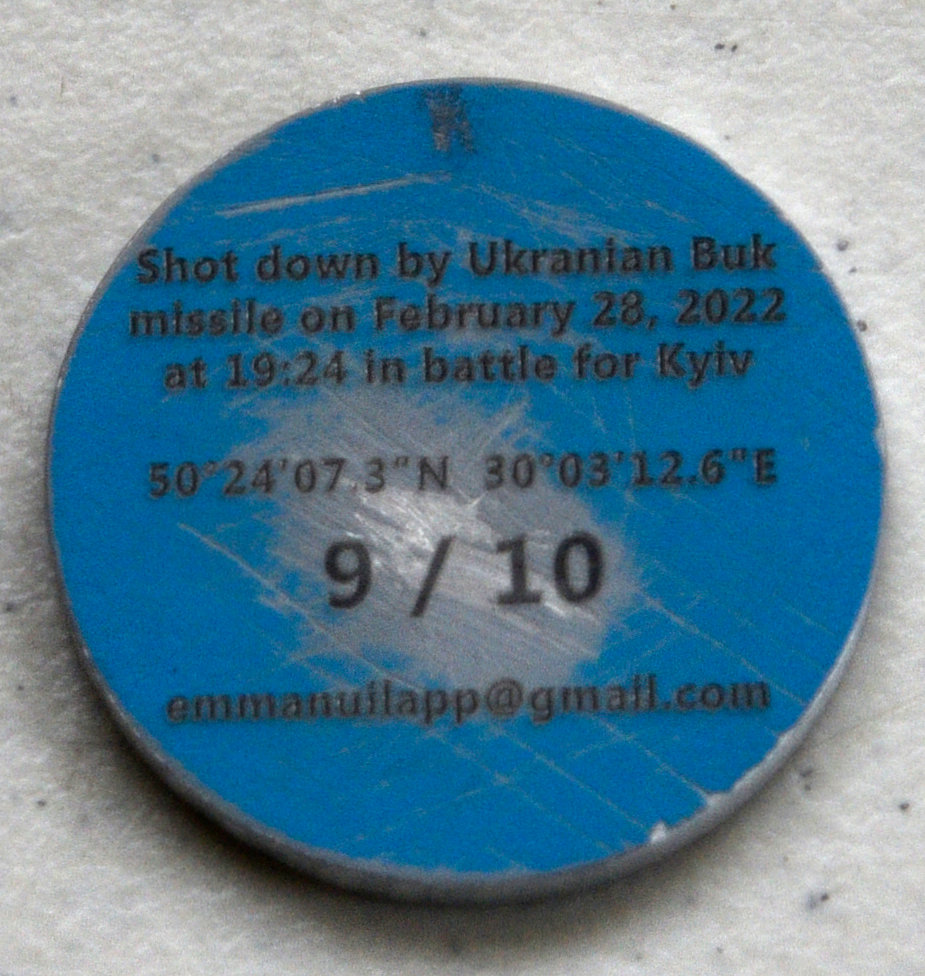 The reverse of a challenge coin like that of the coin Pavel Androshchuk presented to the Cortland Common Council.
Previous Next
Posted Thursday, December 29, 2022 4:00 pm
Jacob Mack, Cortland Standard

Cortland sent firefighting gear to Ukraine. The Ukrainians it helped sent back a Russian fighter jet, in the form of a challenge coin. Fashioned from the shrapnel of a jet that was downed in Kyiv this year, the coin was presented Tuesday to the Cortland Common Council by a Cortland firefighter who hails from the war-torn country.

While the Ukrainian capital, was under missile fire in April, The Cortland Fire Department sent 50 sets of personal fire equipment to not-for-profit organization Heavens Community Center in Ukraine, with the help and connections of Cortland Firefighter Pavel Androshchuk, who hails from Ternobyl, Ukraine.

“I have family in Ukraine as every Ukrainian does right now, fighting for their freedom,” Androshchuk said. “Some of my family has gotten together, and they’ve been able to recapture some scraps and shrapnel from downed Russian fighter jets and have created some challenge coins that we wanted to present to the city council and the chiefs that have helped us out when we needed it most.”

The Cortland Police Department also sent gear to Ukraine earlier this year, and Androshchuk thanked them and all those that made this possible for their efforts. “Chief (Paul) Sandy has helped in donating some ballistic armor, body armor, vests, and helmets as well through the Ukrainian church,” Androshchuk said. “There is a lot you guys could have just sat through and said ‘This is someone else’s problem, this is not a big deal.’ But you guys stepped up to the plate, and I can’t even begin to imagine the impact your donations and contributions have made. Thank you for all your support.”

“Battalion chief Reynolds as well as Chief Friedman have reached out to me, and whenever I went silent, they checked in on me,” he said. “They’ve suffered through the pictures of my family, sleeping in bomb shelters. Eight-, 9-, 10-year-old siblings, this is the life they live now. They wake up in bomb shelters, not going to school, doing online schooling if they can.”

“The fire department sent surplus firefighter turnout gear, we call it our bunker gear,” Fire Chief Wayne Friedman said. “It has a term life for us that we have to adhere to, some if it was in really bad shape but we surplused it, and our standards require current gear.”

“Pavel talked about some things he knew they needed help with through his connections there,” he said. “We had this resource that we could offer to assist them in their time of need, and one of our firefighters coming from there gives us a little more connection than most.”

That connection, forged by Androshchuk, has brought Cortland Fire and Police department gear to Ukraine.

“We had connections there that made sure it was distributed to the public or fire departments over there that didn’t have good equipment,” Androshchuk said.

“We’ve been involved with a similar project long before the war, not necessarily with Cortland but surrounding departments,” he said. “Fire gear has an expiration date 10 years after its manufacture, according to NFPA guidelines, however a lot of this gear is still in great shape.”

“We worked with different nonprofits to deliver the gear, the biggest one I’ve been using is the Cortland Ukrainian church,” Androshchuk said. “They’re highly established with companies who ship it and have contacts in Ukraine and in Poland to help us ship it.”

“It’s been a combined effort of reaching out to the church and they say ‘we can get it to such and such a region, can you get it further?’” he added. “My contacts in Ukraine can usually get it where it needs to go after that.”

“Since March we’ve shipped 122 sets of gear from Cortland, the village of Homer and Preble, and a shipment from Virgil as well,” Androshchuk said. “Before that I don’t have an exact number, it’d probably be around the same amount, but it was over the course of a few years. War has had a funny effect of speeding things like this up.”

The gear has landed in Irpin, he said, and Bakhmut, where some of the heaviest fighting has been seen. “All of these departments as well as Preble and a few others have donated gear which has made its way to the frontlines in Ukraine,” Androshchuk said. “It’s been seen helping people, regular citizens. It’s not going to military aid to recapture ground or territory. This is helping regular civilians.”

“When you see missiles and rockets falling on your home country, and everyone else in Europe is untouched, it’s human to feel like you’re left out and unheard,” he said. “People reaching out to me over the course of the past year has been great. A lot have reached out with thoughts and prayers and that’s great and all, but a lot more have reached out with tangible assistance, with stuff they can actually do and help and that’s been overwhelming.”