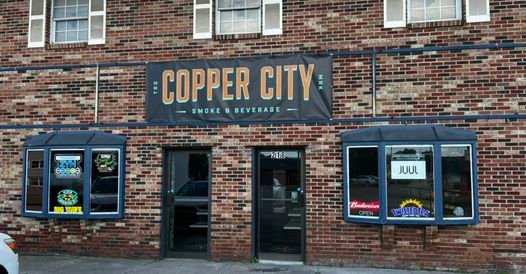 The ribbon cutting will be at 1:45 p.m., with a special beer tasting event to follow between 2-5 p.m.

Only those age 21 and older may attend, and IDs will be checked. Owners Michael J. Luiere, Anthony Varano and Rocco Luiere said they will have six beers available for tasting included in the $5 entry fee, which also includes a color-changing Copper City Smoke & Beverage cup.

Those who attend will also have the opportunity to try a couple premium cigars for free. The event will feature a food truck by Zeta's Eatery, of Rome, and music by John McConnell. A representative of Republic Tobacco LC, a multinational wholesaler, distributor and retailer of tobacco based in the Chicago, Ill., will also be on site.

"We want to be part of the community and give back by giving job opportunities and helping other local businesses grow," the owners said. "We've had a lot of foot traffic since first opening for business in June, but we're starting to get more vehicles now, and we hope to continue growing our customer base."

Copper City Smoke & Beverage has a 1,800 square-foot, walk-in store with a unique variety of beers from local and out-of-state microbreweries, as well as larger beer companies, in addition to ciders and seltzers. There is also a wide selection of traditional and alternative smoking products, as well as potato chips and other snacks.

The business also operates as a wholesale company, which regularly serves about 40 businesses and taverns across a stretch of upstate New York to include Buffalo, Rochester, Watertown and Albany.

Historically, 218 S. James St. once served as a train station. Some metal beams were preserved from the old building and used for the ceiling of the industrial-styled store interior. According to co-owner Anthony Varano, the beams are stamped with a serial number traced to a factory where the metal beams used to construct the Empire State Building were manufactured.

The owners continue to make improvements to the historic building, and said they hope several community members come to check out the newly renovated store.