Friday capped off a weeklong challenge helmed by the Air Force Research Laboratory Information Directorate, and Griffiss Institute — the 2022 Annual Challenge Competition at the Innovare … 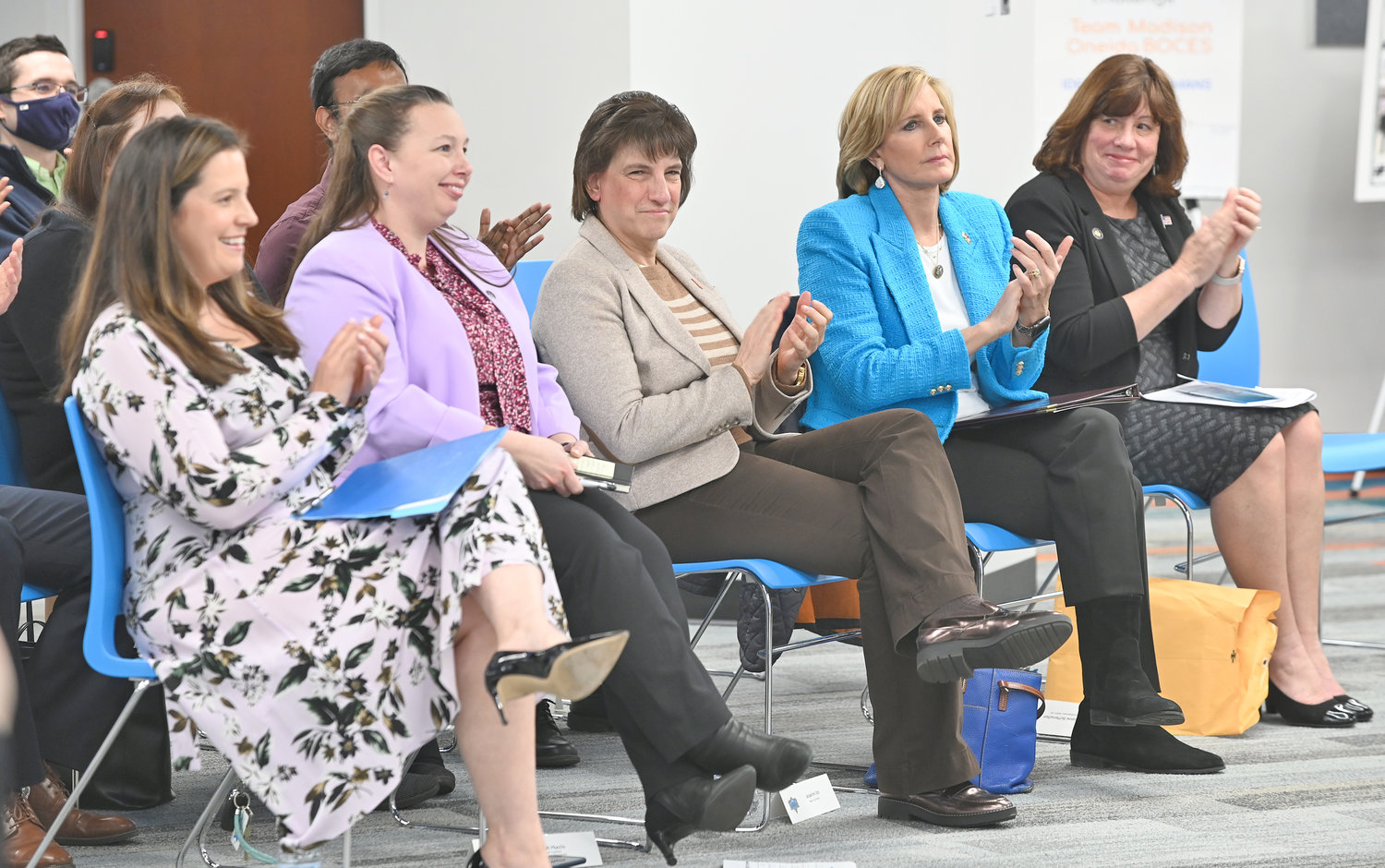 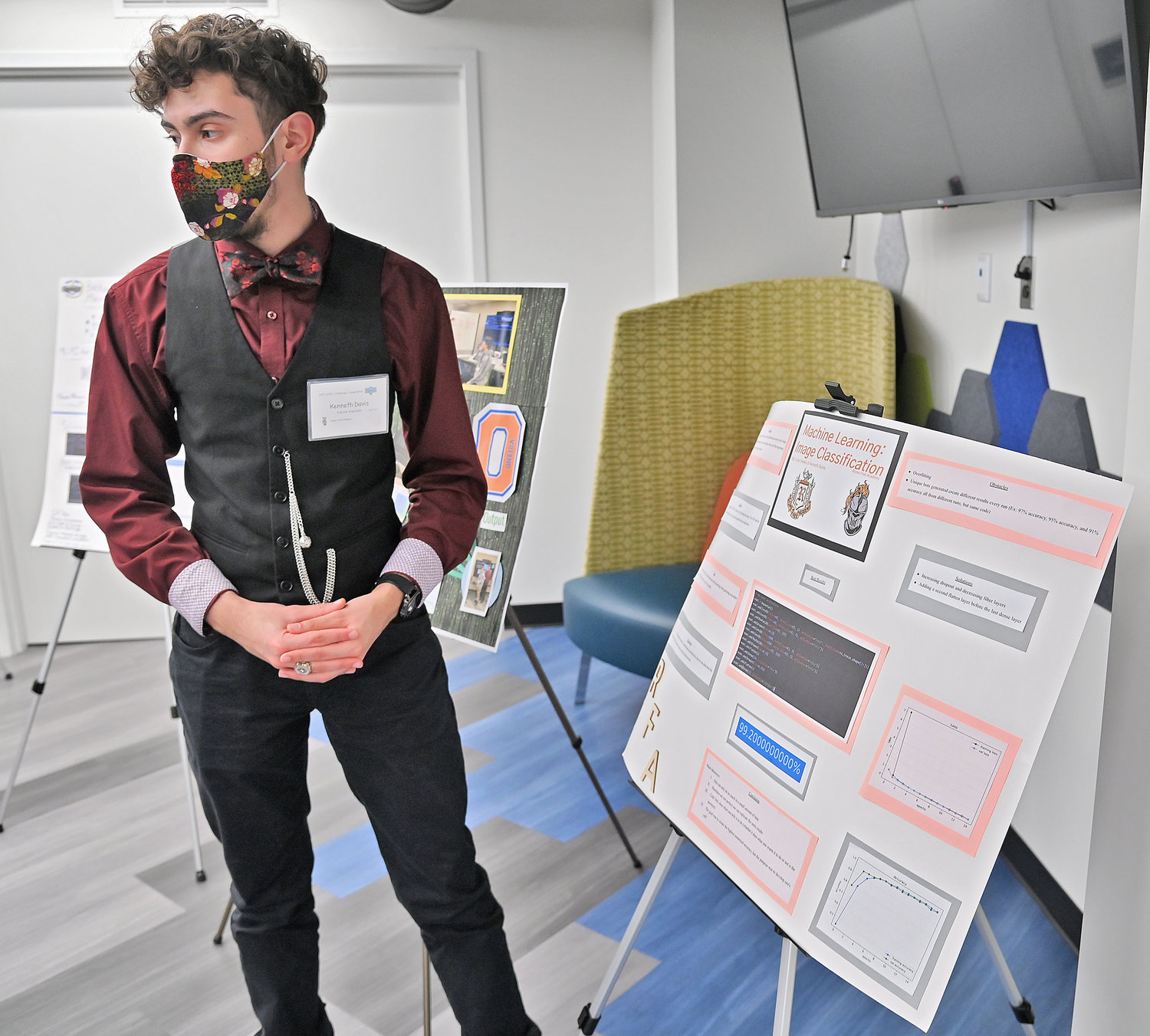 RFA juniors Kenneth W. Davis talks about their poster and the project they worked on this past week at the STEM event at Innovare. Colyn T Seeley was his working partner on the project also and junior at RFA
(Sentinel photo by John Clifford) 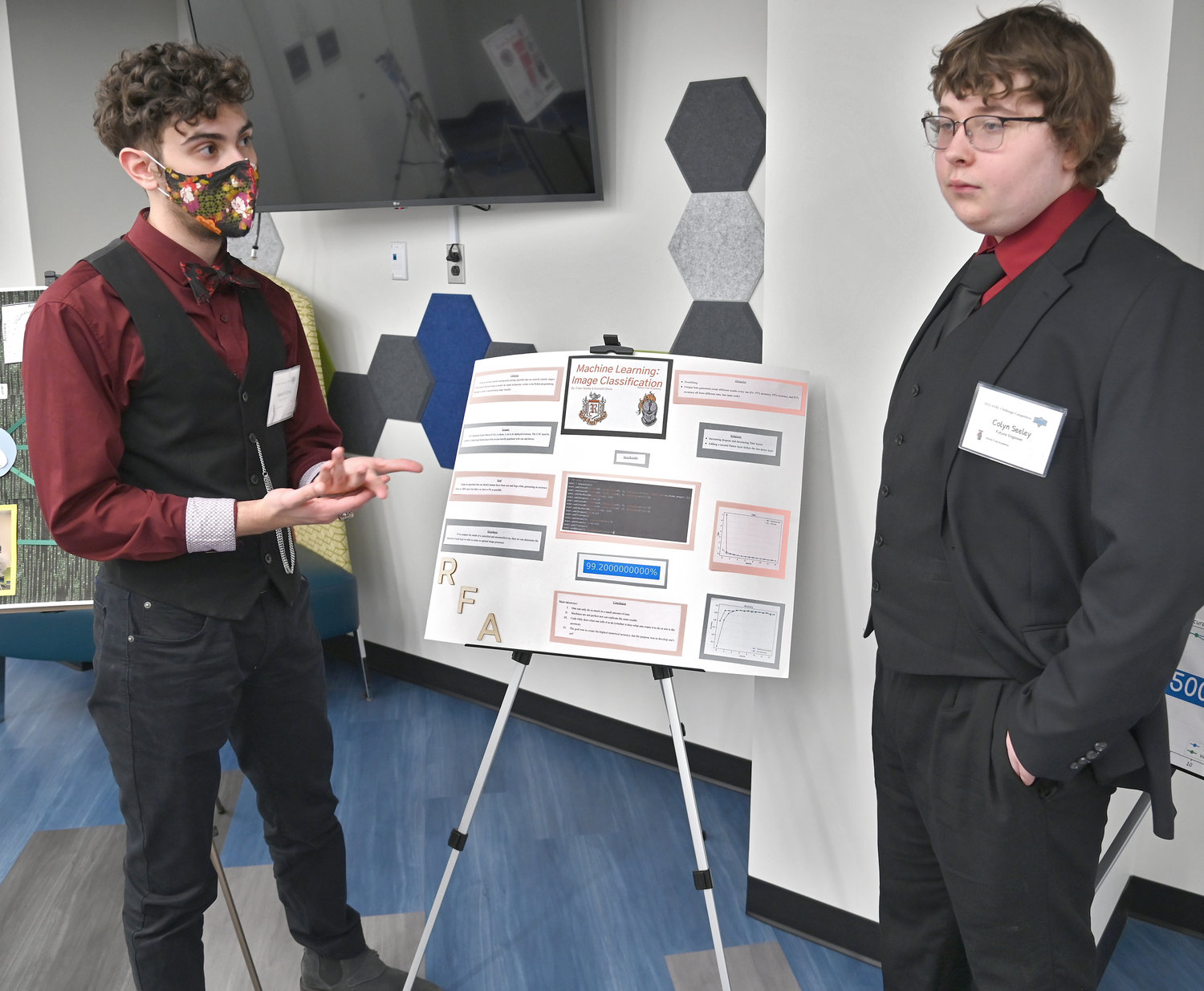 RFA juniors Kenneth W. Davis and Colyn T. Seeley talk about their poster and the project they worked on this past week at the STEM event at Innovare.
(Sentinel photo by John Clifford) 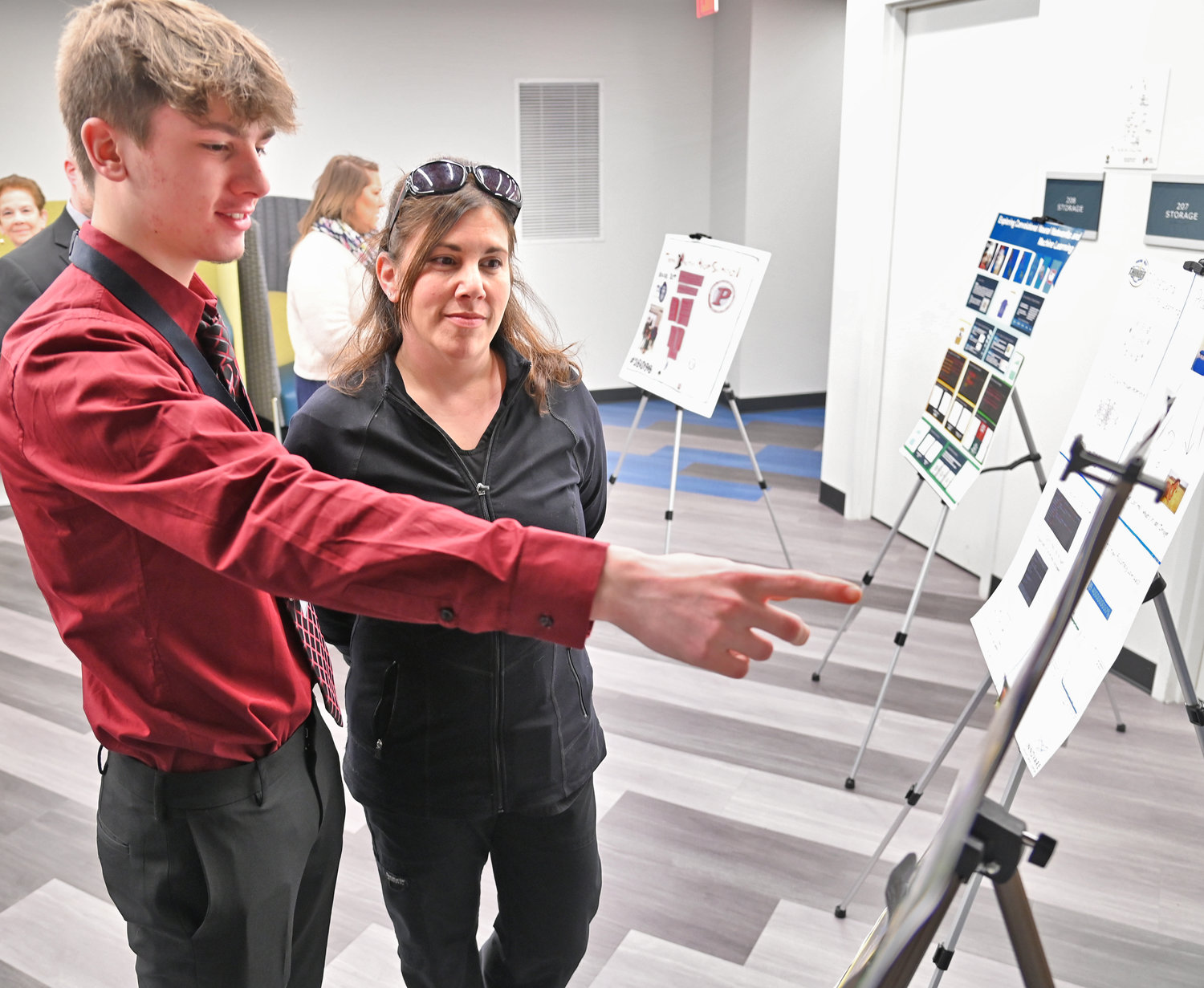 Kaleb Lanz a junior at Onedia HS shows his mom LeAnn his poster before the start of the awards ceremony at Innovare Friday afternoon. His project focused on drones differentiating between humans and animals in the event of a natural disaster.
(Sentinel photo by John Clifford) 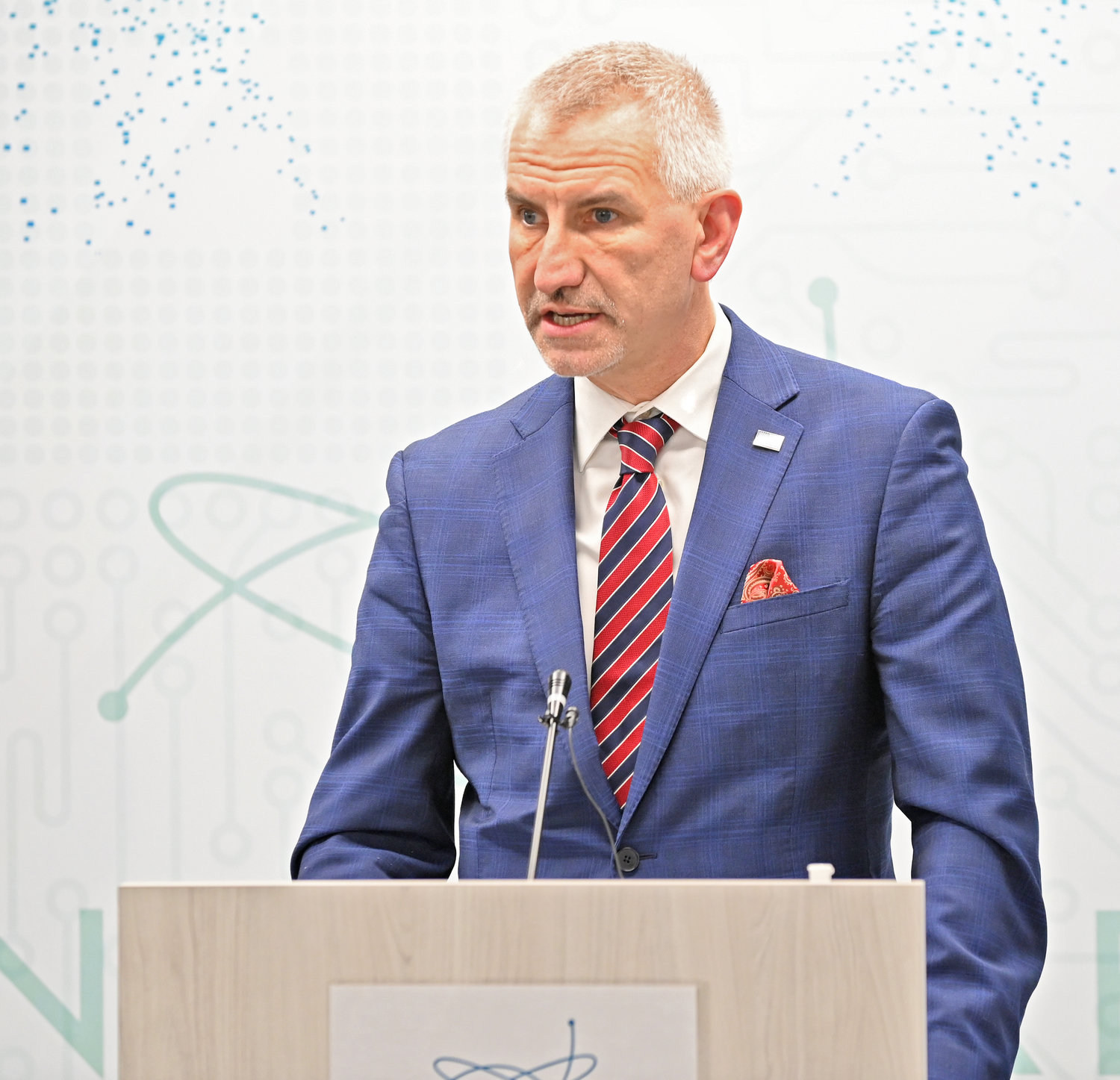 “The Challenge Competition is an annual competitive STEM initiative for local high school students. It is held during a week when students are on a school break and its intent is to provide a more realistic view into the types of high-tech problems the nation is facing today, and how engineers and researchers go about dissecting and solving these problems,” notes program information.

Officials at the Friday closing program said students pursuing education in those avenues were setting themselves up for future success as areas like the Mohawk Valley continued to build out its tech sector.

This year’s challenge problem was developed by the Information Systems Division of ARFL/RI, whose mission is to lead research, development, prototyping and demonstration of innovative technologies and systems that advance understanding and application of technologies to enable joint all-domain command and control for Department of the Air Force and the joint force.

Among the teams competing were a pair of Rome Free Academy juniors - Kenneth Davis and Colyn Seeley with a machine learning project.

They chose to spend the week on a project teaching a computer to distinguish and separate different human and animal faces in a crowd. They tested their ability to allow a computer to learn to replicate a human thought process.

The pair said they honed their skills testing for accuracy and uncontrolled variables during four, eight-hour work days that were mixed in with seminars and presentations.

During an awards ceremony, the students heard from local and state elected officials including Assemblywoman Marianne Buttenschon, D-119, Marcy, who praised the students for participating during spring break and gaining valuable skills and learning that would benefit their future, saying “The option you chose was the best.”

“It is so refreshing to see students and teachers get to explore problems we see here at the lab. … This is just a taste of what your future could be,” Dr. Sarah Muccio, Acting Chief Scientist at AFRL told the students.

In a keynote speech by Congresswoman Elise Stefanik, R-21, Schuylerville, spoke to the benefits of skillset being pursued by the students, how important those skill sets are across the nation and how they can be applied to careers in the Mohawk Valley.

She continued, “During my time in Congress, I have worked tirelessly to bring tens of millions of dollars to the Air Force Research Lab in Rome to ensure that Upstate New York’s emerging technology environment is well-funded and supported. I look forward to continuing this critical work and delivering additional funding for these efforts in the years ahead.”