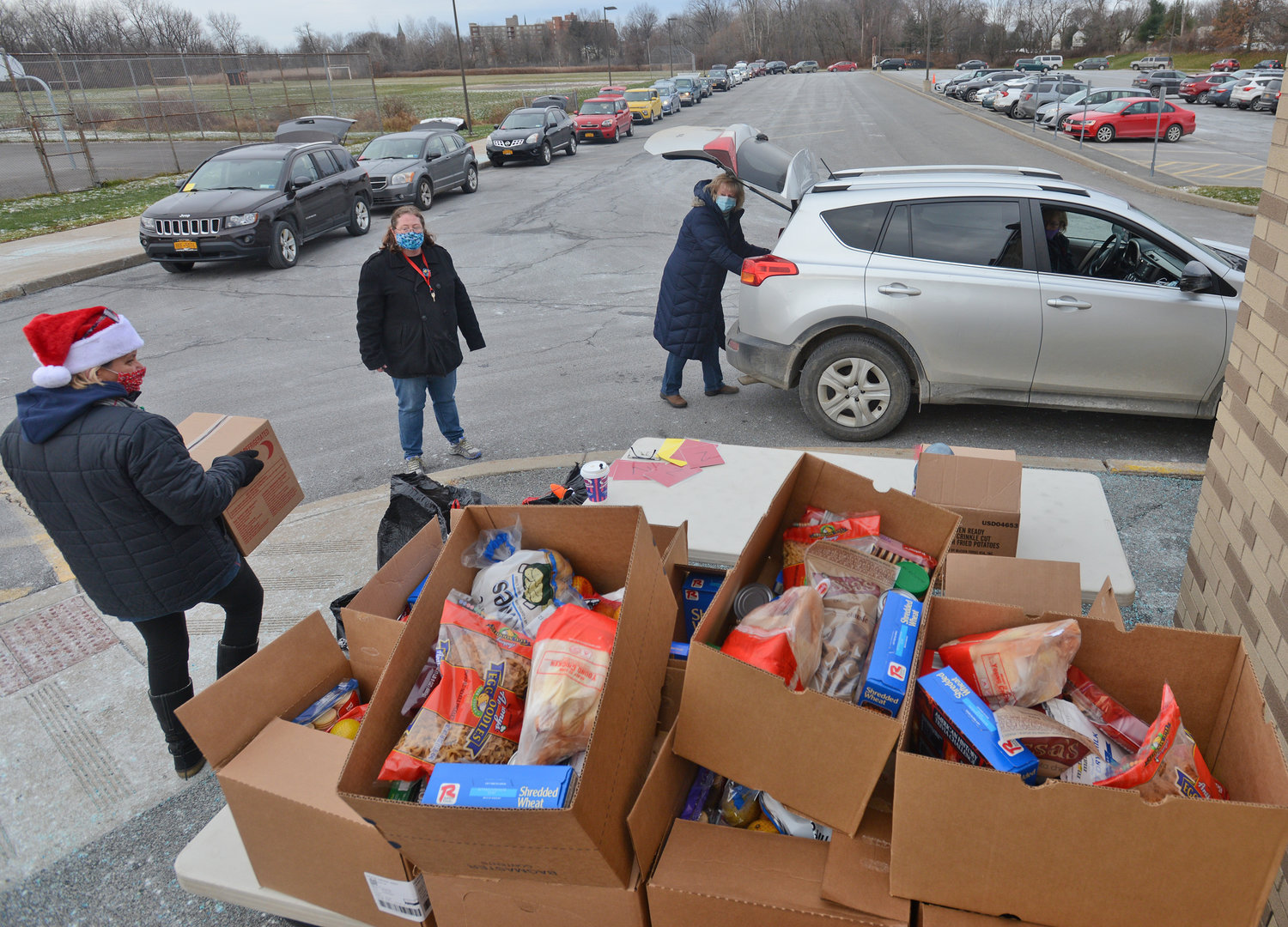 LINING UP FOR FOOD — Vehicles line up in the Staley Elementary School parking lot Wednesday morning, snaking around the edge of the lot and out the entrance onto Bloomfield Street, for a Holiday Food Giveaway conducted by the Connected Community Schools (CCS) initiative. Distributing the food, from left, are Melissa Roys, executive director of the Community Alliance spearheading the CCS initiative; Jessica Hampe; Nancy Opperman.
(Sentinel photo by John Clifford) 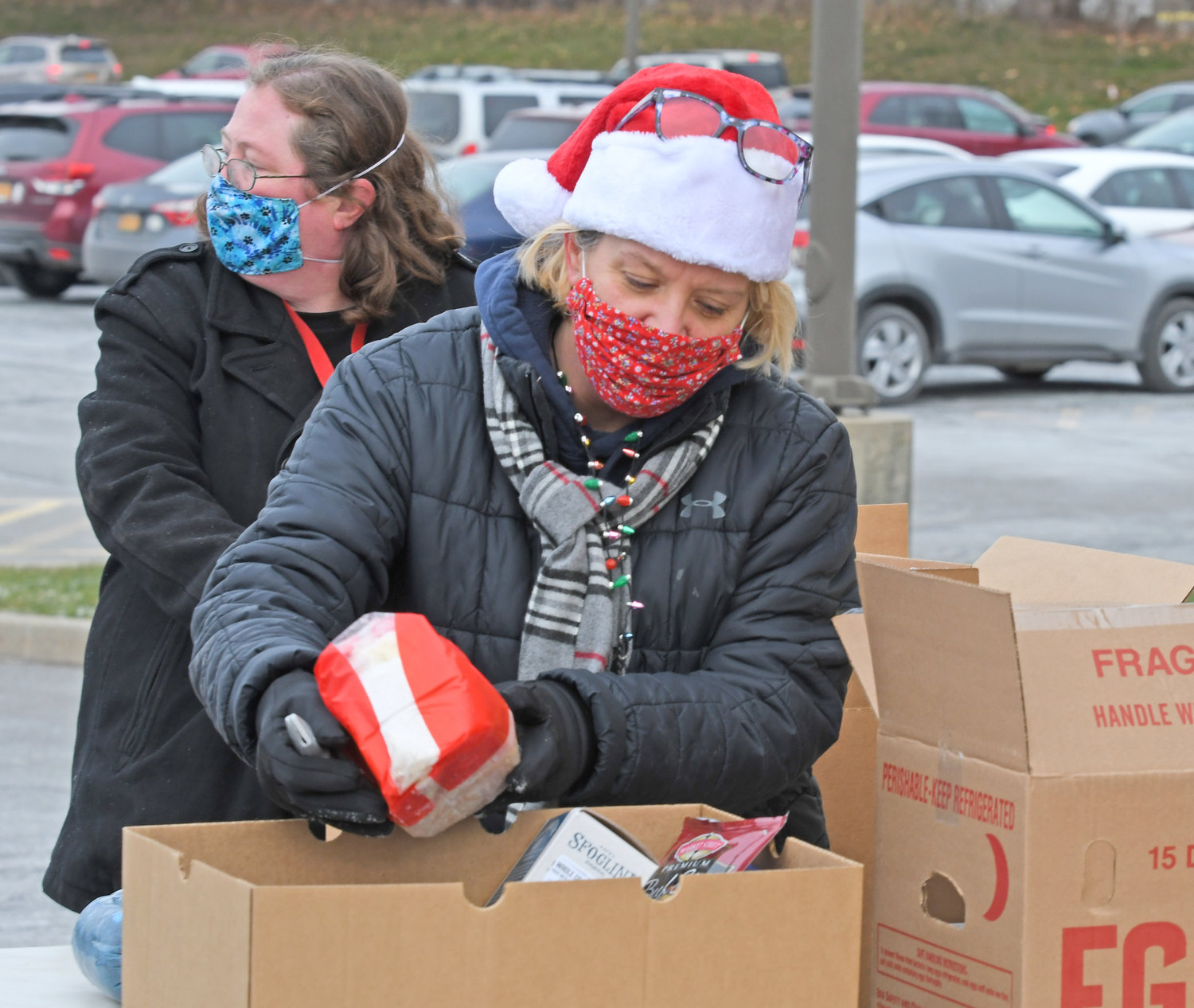 PACKING A NOTEWORTHY BOX — Melissa Roys, executive director of the Community Alliance spearheading the Connected Community Schools initiative, prepares a box Wednesday morning with the millionth pound of food to be distributed by the initiative since its food giveaway program began last March in response to COVID-19.
(Sentinel photo by John Clifford) 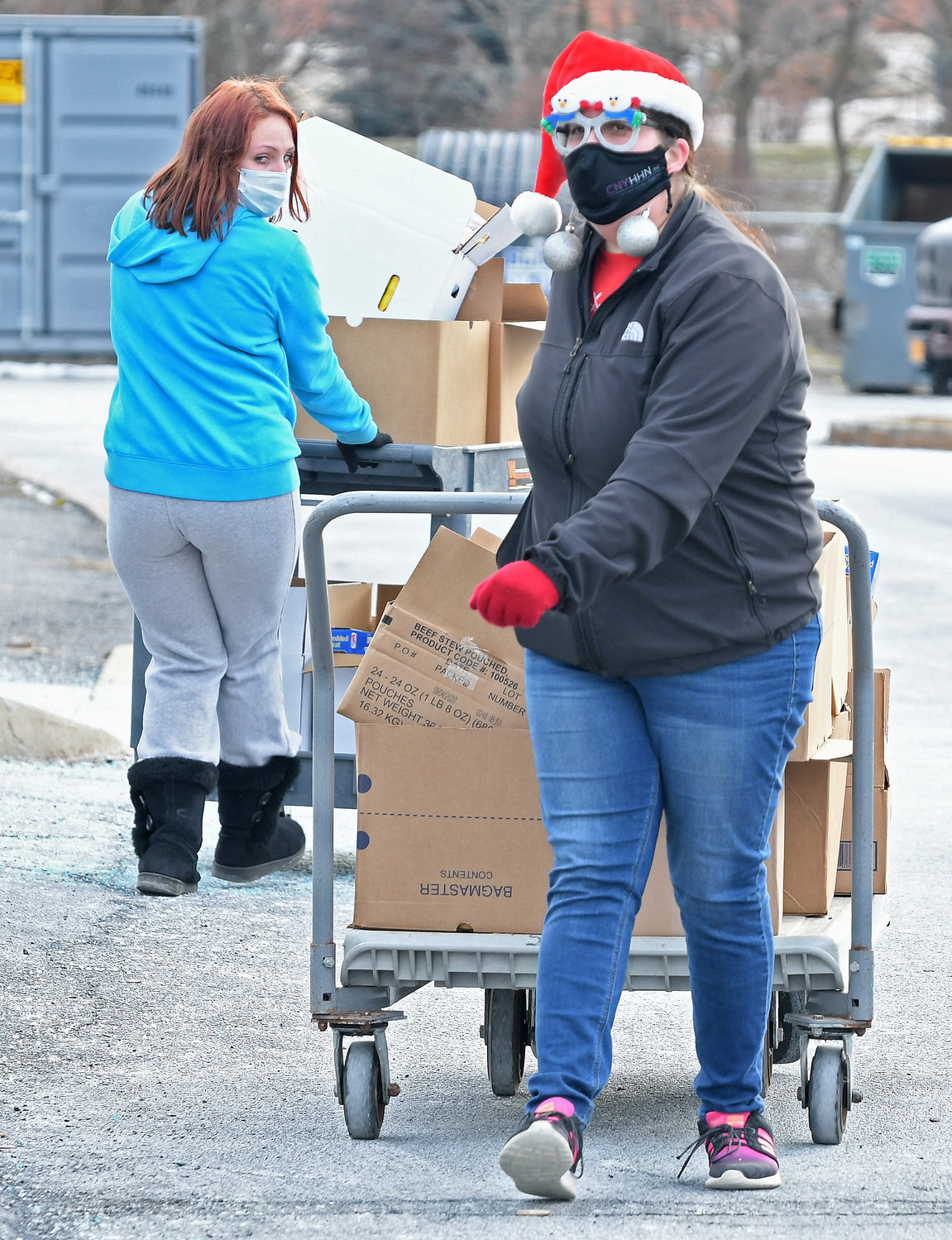 CARTING OUT THE FOOD — Rolling out carts filled with food items for a Connected Community Schools Holiday Food Giveaway on Wednesday at Staley Elementary School are, from left, Mandi McGuigan and Alyssa Whitaker. The food distribution program marked one million pounds of food that has been provided since last March in response to COVID-19.
(Sentinel photo by John Clifford) 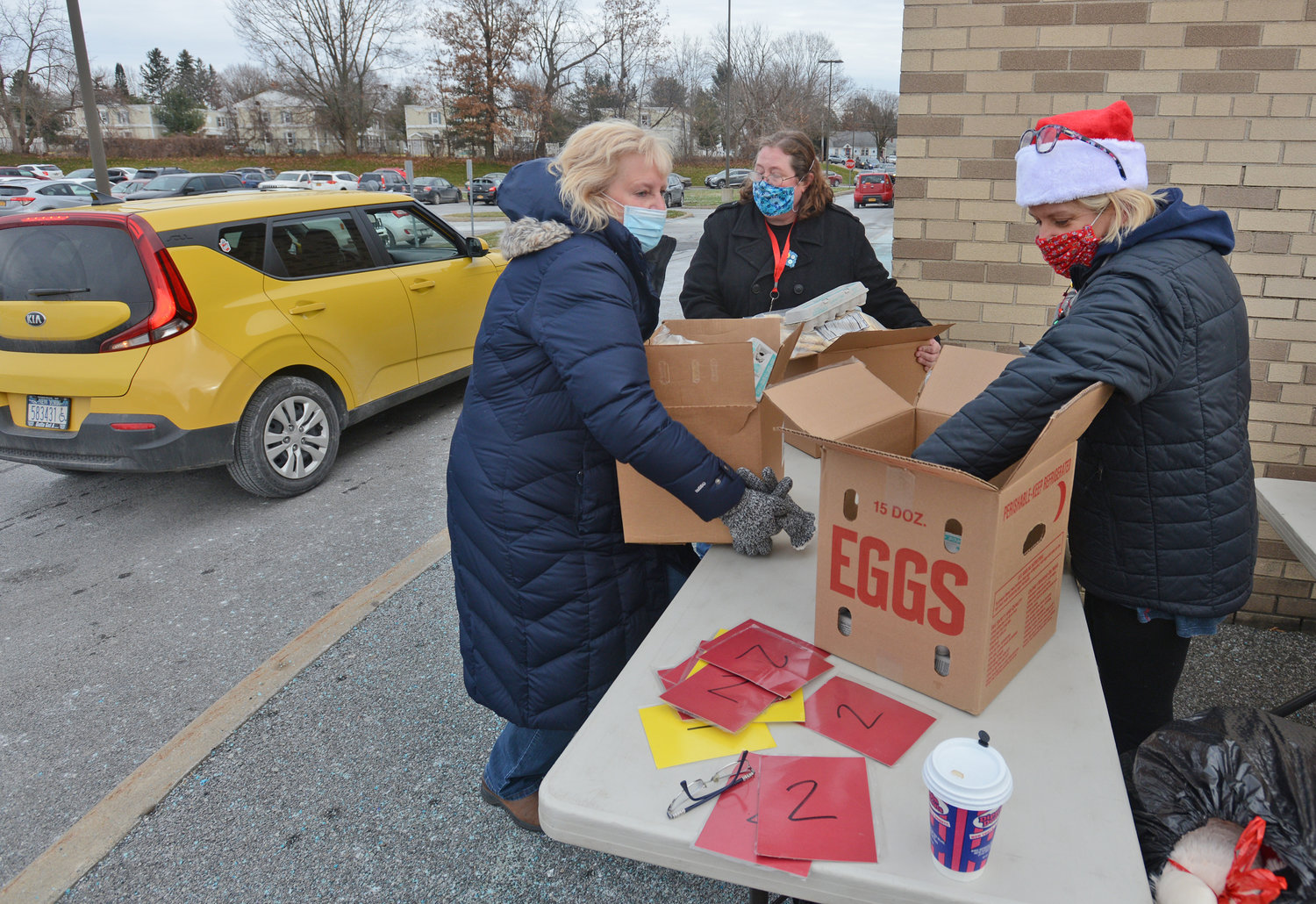 One million pounds and 277 days later, the local Connected Community Schools (CCS) initiative continues to conduct regular free distributions of food to help meet families’ needs during the many difficulties wrought by the COVID-19 pandemic.

The food pantry program, launched last March by CCS in response to the COVID-19 situation, reached the millionth pound of food provided on Wednesday morning during a Holiday Food Giveaway from its location at the rear of Staley Elementary School.

It is an achievement, yet also a “sad milestone” that “speaks to the volume of need” at this time, said Melissa Roys, executive director of the Community Alliance spearheading CCS, while standing outside Staley and helping to hand out food-packed boxes to people in vehicles.

A long line of waiting vehicles, snaking around the school’s main parking lot and out the entrance to continue along Bloomfield Street, had already gathered before the 10 a.m. start Wednesday for the food distribution.

Among items given out Wednesday, said Roys, were a full chicken or ham, plus potatoes, stuffing, produce, pasta, fruit, eggs and cereals. The amounts equated to about five meals for each packed box.

Roys said over 400 vehicles were at the school for Wednesday’s food distribution, noting that an average of 400-500 vehicles typically have been appearing.

The CCS food giveaways at Staley previously had been at least once a week, but as of November are now once or twice a month.

The schedule change is for volume and sustainability, said Roys, noting the giveaways now involve more food but are less often. Anyone from the surrounding area is welcome to come.

The food distribution also includes locations within the Waterville, Dolgeville and Town of Webb school districts which are part of the CCS initiative in addition to Rome.

A CCS announcement said “each area has been served in varying degrees with food assistance and programming during the pandemic.”

The CCS Response Team, which “has been up and running since the announcement of the pandemic in March,” has been continually assisting families “with a multitude of needs including regularly distributing food,” the announcement noted.

“The CCSRT has assisted to date 55,000 unduplicated people with food assistance, 20% being senior citizens, 40% being children and an additional 20% being from outside the Rome area.”

The CCS initiative’s mission includes ensuring “every student’s needs are met in order for them to fully engage in their academic opportunities,” the announcement further said.

When the food distributions began last March, Roys observed, she “never would have imagined” they would still be offered at 277 days and counting. The next CCS local food giveaway will be in the second or third week of January, she said.

The food distributions have included items donated to CCS such as non-perishable goods, plus food has been purchased with the help of monetary donations and various grants received by CCS.

The organization has kept a tally of the pounds of food involved, including for the amounts that it ordered as well as for items directly donated, Roys explained.