AMSTERDAM — Watching her son play on the playground at Marie Curie Elementary School, Lydiana Bracero said the six-year-old is just like any other kid. “All kids have special needs,” Lydiana … 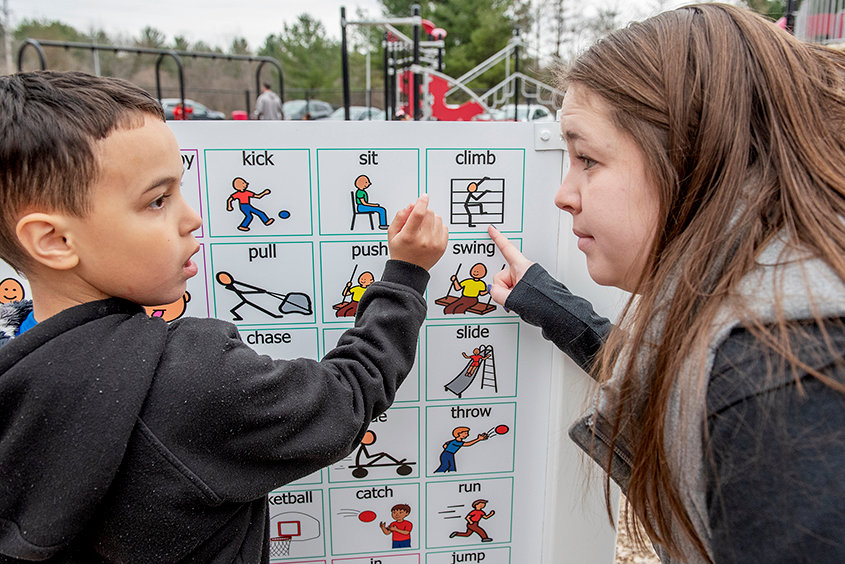 LET’S DO THIS — Jomar Rodriguez, 7, points to “climb” on the communication board with his K-2 Autism special education teacher Marisa White at Marie Curie Elementary in Amsterdam last week. A new communication board was installed inside the playground area to assist students with with special needs be better able to express what they would like to do during recess.
(AP Photo/Erica Miller/The Recorder)
Posted Thursday, April 14, 2022 5:30 pm
Ashley Onyon via Associated Press

AMSTERDAM — Watching her son play on the playground at Marie Curie Elementary School, Lydiana Bracero said the six-year-old is just like any other kid.

“All kids have special needs,” Lydiana Bracero said. “But they should all be able to enjoy the same things and be able to communicate and have fun with their peers no matter what their ability is.”

Januel Bracero has autism, but Lydiana Bracero is clear that doesn’t define her son or his abilities.

“He is a great kid no matter what he has,” Lydiana Bracero said.

Januel is among the six students in kindergarten through second grade taught by special education teacher Marisa White in the autism classroom at Marie Curie.

Most of the students in the class are non-verbal or have limited communication skills. They are able to communicate their needs and wants while they learn using visual symbols.

“I think that these kids can be seen as not having the ability to do a lot of things, but they just do it differently,” White said. “I’m a big advocate for seeing what they are able to do rather than what limits them.”

Everything in the autism classroom is visual from students’ schedules to the symbols at their desks to perform various tasks or ask for help. The kids regularly use iPads at school displaying symbols to communicate with teachers and other students from throughout the school.

The symbols are also used at home to communicate with their families. Lydiana Bracero said Januel has been able to show her what he wants since starting kindergarten at Marie Curie. Now as a first grader, her son is trying to speak for the first time.

“I really love this school and everything that they do,” Lydiana Bracero said.

Juggling the tools used to display symbols while running around the playground can be a challenge. That is why White and speech coordinator Lisa Long advocated for communication boards to be installed at the playgrounds of each of the four elementary schools in the Gloversville Enlarged School District.

“Every student should have a voice,” Long said.

Christine Smith, director of special education at GASD, agreed the signs would be another way to help provide equitable access to resources for all students and integrate students of all abilities into the school community.

The district used nearly $5,000 through a state Individuals with Disabilities Education Act grant to install the new tools at each of the four elementary schools late last month.

The communication boards feature colorful symbols with the words the images represent on one side and instructions on how to use the tool on the flipside. There are images for various playground games and equipment, different actions and to express feelings or ideas.

Students can use the boards to initiate communication with other kids or adults. Adults can also use the tools to prompt children to determine what they want or need. White’s students are already familiar with the symbols they use on a regular basis.

Elementary school teachers throughout the district were sent information about the boards to explain to students who can use them to interact with other children or to communicate themselves if they are struggling for any reason on the playground, Smith said.

“I think it’s something that is universal for all students,” White said of the symbols. “Even in Gen. Ed. classrooms we should be using visuals, because there are a lot of visual learners out there who can benefit from seeing a picture, seeing a word and learning that way.”

Posting the communication boards at each of the elementary schools is a great way to expose kids to the different ways that people communicate, Lydiana Bracero said. “Kids are taught,” she said. “I think this is going to help them a lot to understand kids with autism.”

Most importantly the boards will help kids of all abilities have fun, White said.